Clavicular fractures are commonly encountered in daily practice, and most cases are operated under general surgery. Until now, there has been a debate about the best approach to manage pain in such cases.

We aimed to evaluate whether ultrasound-guided clavipectoral block [clavipectoral fascial plane block (CPB)] would be safe and effective in cases with clavicular fractures.

CPB is a safe and effective regional technique that should be used for pain management after clavicular fixation surgery.

Clavicular fractures are frequently encountered in orthopedic practice, and about 80% of these fractures are located in the mid-shaft region. Due to the complexity and variability of the nerve supply of the clavicle, there is an ongoing debate regarding the optimum regional anesthetic technique that could be applied to decrease pain in such cases (1, 2).

It is worthy to mention that the supraclavicular nerve, a branch from the superficial cervical plexus, provides sensory innervation for the skin overlying the clavicle (3). Nevertheless, there is some controversy regarding the sensory nerve supply of the clavicle itself. Some authors believe that it receives its innervation from the suprascapular nerve, while others believe that it is supplied by branches from the brachial plexus nerves, including the long thoracic, subclavian, and suprascapular nerves (3, 4).

The clavipectoral fascial plane block (CPB) is an effective and safe novel regional anesthesia technique, which was originally described by Valdés-Vilches in 2017. They reported injection of about 10 - 15 mL of the local anesthetic agent under ultrasonographic guidance into the space between the clavipectoral fascia and the periosteum of the clavicle itself, on both medial and lateral aspects of the fracture area (8).

Based on intensive literature research, there is a paucity of prospective randomized clinical trials evaluating the safety and efficacy of this novel regional anesthetic technique in adult patients’ midclavicular fractures. That is why we conducted the current study.

The aim of this study was to evaluate whether ultrasound-guided clavipectoral block (CPB) would be safe and effective in cases with clavicular fractures.

This prospective randomized clinical trial was conducted at the Anesthesia and Intensive Care Department of Tanta University, Egypt, over a period of 6 months from October 2020 to March 2021. This study was approved by the Ethics Committee of Tanta University, Egypt (Number 34111/9/20) and then registered in the Pan African Clinical Trial Registry (code: PACTR202010665720209).

We included adult patients of either sex, aged between 18 and 60 years, diagnosed with clavicular fractures requiring surgical fixation, and classified as class I or II according to the American Society of Anesthesiologists (ASA). On the other hand, we excluded patients with the following criteria: patients’ refusal, body mass index (BMI) ≥ 35 kg/m2, coagulopathy, known allergy to study medications, neurological deficit on the side of surgery, previous neck surgery or radiotherapy, or history of chronic analgesic use. Additionally, uncooperative patients and patients with local infection at the site of surgery were also excluded.

Before surgery, all cases were subjected to history taking, general and local examination, routine laboratory and radiological investigations. Chest X-ray was performed to rule out pneumothorax, hemothorax, or multiple ipsilateral rib fractures that may present in such cases. Then, informed written consent was obtained from all cases after a complete explanation of the benefits and drawbacks of each intervention. Additionally, patients were informed how to use the Visual Analogue Scale (VAS) to assess pain (9).

All participants were required to fast overnight before surgery. On arrival to the operating theater, routine hemodynamic parameters, including electrocardiogram (ECG), blood pressure, heart rate, oxygen saturation, and temperature, were measured. Also, an IV line (18-gauge cannula) was inserted, and all patients received midazolam 0.05 mg/kg before induction of anesthesia.

In all patients, the ultrasound-guided block was performed by an experienced anesthesiologist, who had no further role in the study, after induction of anesthesia and before starting surgery when the patient was in the supine position, sterilized, and covered with sterile sheets.

For the clavipectoral block group, the procedure was performed under the guidance of a high frequency (10 - 12 MHz) linear probe. The probe was placed on the skin covering the anterior surface of the clavicle on both the medial and lateral sides of the fracture. The needle was inserted from caudal to cephalic direction using the in-plane approach to avoid pneumothorax. A total of 30 mL of the local anesthetic mixture (1: 1 bupivacaine 0.5% + lidocaine 2%) was injected between the clavipectoral fascia and the clavicle periosteum on both the medial and lateral side of the fracture equally (Figure 1).

In the placebo group, using the same device and steps, the placebo block was performed. Normal saline (about 30 mL) was injected on both the medial and lateral sides of the fracture at the same plane used for injection in the clavipectoral group.

The pain was assessed by VAS at the following time points: on arrival to PACU and then at 2, 6, 12, and 24 hours after surgery. If the patient reported VAS ≥ 4, IV tramadol 50 mg was administered, and the total 24-hour analgesic consumption was recorded. The patients were asked to rate their degree of satisfaction regarding the analgesic technique on a 5-point scale (0, very satisfied; 1, satisfied; 2, neither satisfied nor dissatisfied; 3, dissatisfied; 4, very dissatisfied). The duration of analgesia was also recorded, and it was defined as the time passing from the time of block until the first analgesic request (10). Additionally, any adverse events related to the blocks within 24 hours were also recorded. Of note, outcome parameters were assessed by another anesthesiologist blinded to the study groups.

The required sample size was calculated on a 2-sample independent t test according to the visual analogue scale score (VAS) reported 2 hours after surgery in our pilot study. It had mean values of 2.00 ± 1.78 and 4.04 ± 2.07 in the block and placebo groups, respectively. Using these data and to achieve a study power of 80%, more than 16 patients in each group were required to detect a significant difference of 2 in the VAS readings. To avoid dropouts, a total of 20 patients were included in each group. 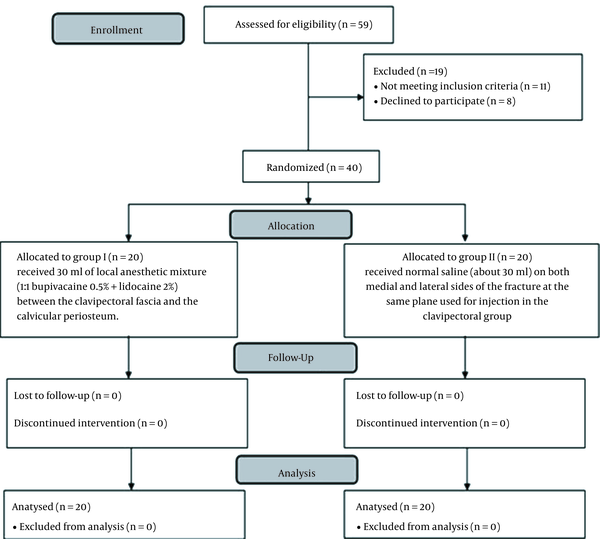 The demographic characteristics, including age, sex, and duration of operation, were comparable between both groups, as shown in Table 1.

VAS was significantly reduced in the clavipectoral block group than in the placebo group, starting immediately from PACU admission until 12 hours after the operation (Table 2).

a Values are expressed as median, interquartile range (IQ), and R (range).

Also, patient satisfaction was significantly better in the block group (P = 0.002*). No block-related complications were reported in our study (Table 3).

In general, our results showed no significant differences between the 2 study groups in terms of general characteristics. This ensures our proper randomization. Additionally, it should negate any bias that might have skewed the results in favor of one group rather than the other.

Also, our results revealed that CPB was associated with a significantly lower VAS in PACU and 12 hours after the operation, with a significant reduction in total opioid consumption in patients who received the block. Moreover, the duration of analgesia showed a significant prolongation in the same group and better patient satisfaction. No complications were also reported related to the injection technique.

Due to the lack of reliable cadaveric studies regarding the innervation of the human clavicle, there is still great controversy about its detailed nerve supply. However, it is agreed that the clavicle and anterior shoulder regions receive a dual nerve supply from both the cervical and brachial plexuses. Therefore, 2 regional anesthetic techniques are required to establish effective pain management in patients with clavicle fractures (11). Previous studies have suggested a combination of superficial cervical plexus block with interscalene block seeking the same aim (7, 12-14). This combination is not only time-consuming, but also has its own complications, including phrenic nerve palsy, Horner syndrome, and vocal cord paralysis (15). Other rare serious complications include total spinal anesthesia, pneumothorax, and vertebral artery injection (11).

The lower VAS and lower total postoperative opioid consumption in our results can be explained by the theory that CPB should provide effective pain relief as all sensory nerves supplying the clavicle pass through the clavipectoral plane except for the suprascapular nerve, which supplies the skin overlying the clavicle. However, Kukreja et al. (11) reported that sensory blockade was noted in this area. They attributed their findings to multiple causes: infiltration of the injected anesthetic agent used in the block itself, diffusion from the local anesthetic infiltration used before the block, or blockade of some branches that might pass through that plane causing sensory loss.

In the same previous study, which included 3 cases undergoing clavicular surgeries, CPB was effective in reducing postoperative pain to zero in PACU in 2 cases. The third case reported a VAS of 6 as the patient had associated-back injuries. However, that case reported 100% satisfaction regarding the block technique (11).

Atalay et al. (16) conducted a case series, including 5 patients (aged 18 - 37 years) undergoing surgery for clavicular fractures. All patients were commenced on postoperative ibuprofen 400 mg every 8 hours. The duration of analgesia ranged between 12 and 22 hours, and at these time points, patients reported VAS between 2 and 4. The authors also reported no complications regarding the pain management technique.

Ueshima et al. reported the application of the same technique in a 57-year-old diabetic patient with coronary artery disease diagnosed with a clavicular fracture. CPB was performed before surgery. The patient experienced 0 out of 10 on a numerical pain scale after the operation. The patient was only commenced on paracetamol 1 gm per 8 hours and maintained that score throughout the first 48 hours after surgery. The procedure was not associated with any complications (18).

Ince and colleagues applied CPB on a 51-year-old male patient with a midshaft clavicular fracture. The pain scale decreased from 8/10 before block till 0/10 after surgery. Subsequent pain assessment revealed 0, 2, 3, 4, 2, and 3 readings at 1, 2, 4, 8, 12, and 24 hours after surgery, respectively. No complications were reported indicating the safety of the block (8).

Our study has several limitations. First, we did not document the sensory distribution of the block. Second, we needed further randomized trials to compare clavipectoral block with other techniques (such as brachial plexus block) to evaluate the effectiveness of CPB as an alternative technique.

The results of this prospective study indicate that clavipectoral block is a safe and effective regional technique that should be used for pain management after clavicular fixation surgery.

Copyright © 2022, Author(s). This is an open-access article distributed under the terms of the Creative Commons Attribution-NonCommercial 4.0 International License (http://creativecommons.org/licenses/by-nc/4.0/) which permits copy and redistribute the material just in noncommercial usages, provided the original work is properly cited.
download pdf 1.36 MB Get Permission (article level) Import into EndNote Import into BibTex
Number of Comments: 0