There is an increasing cesarean section (CS) rate in Egypt. Multiple methods are used to manage pain after CS.

This study aimed to assess the effect of ultrasound-guided bilateral ilioinguinal and iliohypogastric nerve block on pain reduction after CS.

We classified 64 cases of elective CS into two equal groups. The block group underwent the nerve block, and the control group did not. Postoperative pain, morphine consumption, time to analgesic request, and complications were compared between the two groups.

The ilioinguinal and iliohypogastric nerve block is efficient and safe for managing postoperative pain following CS. It is associated with significant improvement of acute and chronic pain after such operations.

There is a worldwide increase in cesarean section (CS) deliveries, which may cause a significant global public health concern (1). In Egypt, the increasing CS rate is in line with many national and international studies. This increase has made Egypt have the highest CS rate after Brazil (45.9%) (2). Several analgesic modalities, pharmacological and non-pharmacological, may be used after CS. Pharmacological agents include neuraxial opioids, such as fentanyl and morphine, neuraxial administration of non-opioid analgesics, systemic opioids, and other systemic analgesics as NSAIDs (3).

There is no single best technique to achieve optimum pain control after CS. Inadequate postoperative pain management is associated with pneumonia, deep venous thrombosis, and delayed breastfeeding (4). The available options include opioids, intravenous non-steroidal anti-inflammatory drugs, peripheral nerve blocks, and epidural analgesia (5-7). Peripheral nerve blockade techniques have gained popularity among pain management physicians, as they are effective in pain reduction, together with the avoidance of systemic side effects of opioid administration, like nausea, vomiting, pruritis, and sedation (8, 9).

Routinely, lower segment CS is performed through Pfannenstiel incision, which corresponds to L1-2 dermatomal distributions. This area is supplied by both ilioinguinal and iliohypogastric nerves. Therefore, the proper blockade of these nerves could manage postoperative somatic pain (5, 10). Musculoskeletal ultrasonography is frequently utilized for peripheral nerve blocks in most operating rooms. Its usage is connected with increased efficacy of the block technique and decreased risk of complications (11-13).

This study aimed to assess the effect of ultrasound-guided bilateral ilioinguinal and iliohypogastric nerve block on pain reduction after CS. We hypothesized that this type of nerve block would decrease analgesic consumption in the early postoperative period and the incidence of chronic postoperative pain in the long term. To our knowledge, this is the first study to examine the role of ilioinguinal and iliohypogastric nerve block in acute and chronic pain relief after CS.

This prospective randomized controlled trial was conducted at the Obstetrics and Gynecology Department, Tanta University Hospital, between May 2020 and May 2021. The study was performed after being approved by the Institutional Ethics Committee (code: 33905/6/20) and registration at Clinicaltrials.gov (registration code: NCT04526015).

Computer‐generated randomization numbers was used to randomly allocate 64 patients into two equal groups. The sealed envelope was then opened by another investigator (who had no other roles in the trial). The block group with 32 patients received ultrasound-guided ilioinguinal and iliohypogastric nerve block, and the control group with 32 patients underwent CS without nerve block. Written informed consent was obtained from all cases before participating in the study and after a complete explanation of the advantages and disadvantages of each protocol. Also, the study was approved by the Local Ethics Committee of Tanta University.

Before the operation, all cases were clinically assessed and underwent routine laboratory and radiological investigations. After the patient arrived at the operation theater, a peripheral IV line was secured via an 18-gauge cannula. Routine monitoring was also established, including non-invasive blood pressure, heart rate, pulse oximetry, and ECG. The IV saline infusion was started before spinal anesthesia.

Spinal anesthesia was performed with an aseptic technique using a 25-gauge Quincke needle inserted into either L2-3 or L3-4 levels. Injection of 2 ml hyperbaric bupivacaine (0.5%) was done after confirmation of the free flow of the cerebrospinal fluid. Before the operation, the sensory block was tested by touch sensation, when the T6-8 block was considered adequate.

The ultrasound-guided ilioinguinal and iliohypogastric block was performed after the surgical procedure. The abdomen was scanned through the anterior superior iliac spine line, where both ilioinguinal and iliohypogastric nerves were identified within 1 – 3 cm from it, within the neurovascular plane between internal oblique and transversus abdominis muscles. After negative aspiration (to exclude intravascular injection), 10 ml of bupivacaine (0.25%) was injected. The same technique was performed on the other side.

Finally, patients were transferred to the recovery room and then the internal ward. Close monitoring of vital signs was ensured. A multimodal analgesia protocol was commenced for all participants in both groups, comprising acetaminophen (1 gm IV every 6 hours) and ketorolac (30 mg every 12 hours). Postoperative pain was assessed via the VAS (14), ranging between 0 and 10 (0 for no pain and 10 for the worst pain ever). The VAS score was assessed during rest and movement. If patients reported VAS > 4, IV morphine (2 mg) was administered, and the total amount of morphine consumed by the patient was recorded.

Other postoperative complications were documented, including nausea, vomiting, sedation, and pruritis. Follow-up visits were scheduled after three and six months to evaluate chronic postoperative pain, defined as persistent pain continuously or intermittently for more than three months after surgery based on the International Association for the Study of Pain (IASP) (15).

The morphine consumption was the primary outcome, whereas the time to the first analgesic request and the incidence of chronic postoperative pain were the secondary outcomes. The outcome parameters were assessed by another anesthesiologist who was blind to group assignment.

Three and six months following surgery, research participants were interviewed by phone to determine the incidence and features of Chronic Postsurgical Pain (CPSP) using a modified version of the Neuropathic Pain Symptom Inventory (NPSI) adopted from the study by Bouhassira et al. (16). The inventory consisted of 10 descriptors, each measured on a number scale (0 - 10).

The sample size was estimated using the IBM SPSS Sample Power version 3.0.1. Based on intensive literature review, the mean dose of morphine (mg/24 hour) in the iliohypogastric-ilioinguinal peripheral nerve block group was 28 mg (standard deviation 27) versus 67 mg (standard deviation 28) in the control group in the study by Bell et al. (17). This difference between the groups was taken for calculating the sample size. At a 95% significance level and 80% power, the sample size was calculated as 32 females in each group.

Statistical package for the social sciences (SPSS) version 26.0 for Windows was used to analyze the data. The Shapiro-Wilks test and histograms were utilized to determine the normality of data distribution. The mean and standard deviation (SD) of quantitative parametric data were calculated using the unpaired student t test. Non-parametric quantitative data were provided as the median and interquartile range (IQR) and examined using the Mann-Whitney test. Qualitative variables were expressed as frequencies and percentages (%) and examined using the Chi-square or Fisher's exact tests as applicable. The p values of less than 0.05 were regarded as significant.

This study assessed 83 patients for eligibility. However, 13 patients did not meet the criteria, and six refused to participate in the study. The remaining 64 patients were randomly allocated into two groups (32 patients each). All patients (n = 64) were followed up and analyzed statistically (Figure 1). 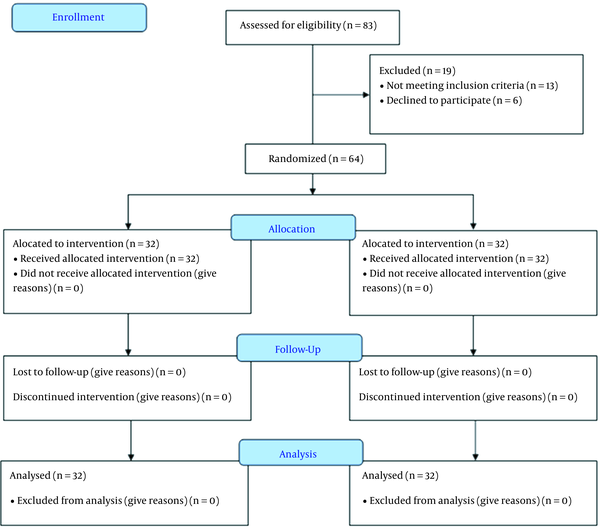 The VAS scores during rest in studied groups

The VAS scores during movement in studied groups

Concerning postoperative complications, the incidence of nausea and pruritis was significantly more in controls (P < 0.005). However, there was no significant difference between the two groups regarding the incidence of vomiting, bradycardia, and hypotension (P > 0.05). The incidence of chronic postoperative pain was significantly lower at the two scheduled follow-up visits in the block group. This complication was reported by 10% and 33.3% of the participants at the three-month visit (P = 0.028), while it was reported by 3.3% and 20% at the six-month visit (P = 0.044) (Table 3).

Cesarean section is one of the most commonly performed lower abdominal operations in females in the childbearing period. Postoperative maternal pain must be well-controlled for adequate neonatal care (18). Also, adequate pain management is associated with a decreased hospital stay, postoperative complications, and increased patient satisfaction (19, 20).

In our study, women who received nerve blocks experienced less postoperative pain than controls. During rest, the VAS score was significantly lower in the block group than in controls starting from two hours until 12 hours after the operation. Additionally, the VAS score during movement was significantly improved with a nerve block two, four, and six hours after the operation.

In agreement with our results, Nigatu et al. reported a significant decrease in pain numerical rating scale during rest or movement in the nerve block group (P < 0.05). The nerve block group had significantly lower pain scores than controls at all measurement times (23). Consistent with our results, Sakalli et al. reported that the iliohypogastric ilioinguinal nerve block was significantly associated with lower VAS scores than the sham block. This was evident at six, eight, 12, and 24 hours during rest (P < 0.05) and six and eight hours during movement (P < 0.05) (21).

The ilioinguinal and hypogastric block after CS achieved an analgesic effect comparable with transversus abdominis plane block (TAPB), and it was even better at subsequent postoperative stages (24 and 48 hours). The authors hypothesized that TAPB is a field block while the other is a truncal block, which may explain the better efficacy of the latter block method (24, 25).

Contrary to our results, another study reported no significant difference between the groups regarding the VAS score within 24 hours after CS (4). Nevertheless, patients in the control group were commenced on patient-controlled intravenous analgesia (PCIA), which could explain good pain control in this group. Despite these results, a study suggested the ilioinguinal and iliohypogastric nerve block as a good option for pain control after CS due to the higher incidence of morphine-induced side effects in controls.

In agreement with our results, Pujari et al. reported significantly lower opioid and non-opioid analgesics requested after operation in the nerve block group (P < 0.05), which was due to the higher analgesic duration (515.64 minutes in the blockade group vs. 246.89 minutes in controls; P < 0.05). The total tramadol consumption had mean values of 10.64 and 66.67 mg in the control and block groups, respectively (5).

Concerning complications in our study, nausea and pruritis were significantly higher in the control group than in the block group. Nausea occurred in 71.9% and 21.9% of the cases, whereas pruritis was experienced in 53.1% and 15.6%. As nausea and pruritis are the side effects of morphine administration (29), their increased incidence in controls could be explained by the significantly increased morphine request. In agreement with our results, Pekmezci et al. reported that the nausea incidence was significantly higher in controls (76%) than in the block group (41%). Also, pruritis was experienced in 43% of the controls and 20% of the block group (P < 0.05) (4).

The current study has some limitations. It was a single-center study with relatively small sample size. Therefore, more studies should be conducted on more cases from different centers. Also, the efficacy of ilioinguinal iliohypogastric nerve block should be compared with other regional modalities like TAPB and wound infiltration.

The ilioinguinal and iliohypogastric nerve block is efficient and safe for managing acute postoperative pain and preventing chronic pain following CS. It is associated with a decreased pain score, analgesic requirements, and opioid consumption.

Copyright © 2022, Author(s). This is an open-access article distributed under the terms of the Creative Commons Attribution-NonCommercial 4.0 International License (http://creativecommons.org/licenses/by-nc/4.0/) which permits copy and redistribute the material just in noncommercial usages, provided the original work is properly cited.
download pdf 716.47 KB Get Permission (article level) Import into EndNote Import into BibTex
Number of Comments: 0