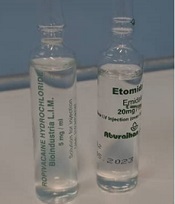 Etomidate is an ultra-short-acting anesthetic agent derived from imidazole that can only be administered intravenously. Etomidate has excellent hemodynamic properties in inducing anesthesia, making it an ideal choice for patients with shock, hypovolemia, or significant cardiovascular disease, with minimal reduction in blood pressure. We report a case of a female patient who was given accidental etomidate intrathecally instead of ropivacaine because of its similar appearance, which led to a slight decrease in blood pressure and no change in the pulse rate. The patient had stable vital signs and no neurological complications.

The history of accidental injections into the spinal cord dates back to 1899. Terrible accidents occur when injecting a local anesthetic containing chemicals or other drugs that are not authorized for intrathecal injection (1). The patient’s final outcome depends on the type and effects of the injectable drug, from transient neurological symptoms to permanent nerve damage such as paraplegia or death.

Etomidate is an ultra-short-acting anesthetic agent derived from imidazole that can only be administered intravenously. Etomidate has excellent hemodynamic properties in inducing anesthesia, making it an ideal choice for patients with shock, hypovolemia, or significant cardiovascular disease, with minimal reduction in blood pressure. It also has several side effects, such as short-term restriction of steroid synthesis, nausea or vomiting, pain during injection, and myoclonus. No case of accidental intrathecal injection of this drug has been reported so far.

In this case report, the patient was mistakenly injected with etomidate for spinal anesthesia. Immediately after injection, no signs of neurological or hemodynamical impairments were detectable, and even after a 5-day follow-up, the same result came up. Finally, she was discharged in good condition.

The patient was a 73-year-old female with a history of high blood pressure and uncontrolled diabetes who was admitted to the hospital from a nursing home. The patient was bedridden, and the atrophy of the lower limb muscles was clearly visible. She was awake and breathing spontaneously. The patient was a candidate for knee amputation surgery due to a diabetic foot. Preoperative examinations were acceptable. Upon entering the operating room, vital signs were assessed blood pressure = 150/65, heart rate = 85, respiratory rate = 19). The heart and lung examinations were normal. The strength of the upper limb muscles was 2/5, and the strength of the lower limb muscles was 1/5. Knee flexion contraction was significant. Spinal anesthesia with 17 mg of 0.5% ropivacaine was considered for right lower limb debridement surgery. Fluid therapy with 500 mL of 0.9% NaCl was started. The patient was placed in a lateral position. Before the anesthesia resident wore sterile gloves to begin the spinal injection, a 0.5% ropivacaine check was performed and placed on the anesthesia table. Then, under sterile conditions with a 26-gauge needle, spinal anesthesia was performed in the L4-L5 space. The technician gave the anesthetic drug to the anesthesia resident to fill the syringe. No abnormal findings were observed during the injection. Minutes later, intact ampoules of ropivacaine and empty ampoules of etomidate drew attention. Accordingly, they noticed the injection of the wrong drug into the intrathecal space. Careful monitoring was performed, and no changes were observed in hemodynamics. Spinal lavage was not performed because we realized too late that the wrong drug had been injected. Neurological symptoms did not indicate pain at the injection site or elsewhere. Due to the failure and non-emergency surgery and the lack of clear vision of possible accidents, the patient’s surgery was postponed. The patient was closely monitored for 2 days due to the lack of hemodynamic, neurological, sensory, and motor changes. She became a candidate for surgery 2 days later. Her surgery was performed under general anesthesia without any problems. She was released in good general condition without any disturbances in the nervous system.

Intrathecal space is an important anatomical space. The risk of injecting the wrong drugs that increase the risk of spinal cord injury is low but not zero. Depending on the dose and type of medication, there are different consequences, from transient and temporary symptoms to permanent nerve damage or even death (1). The most common symptom of accidental injection of a drug into the intrathecal space is pain during injection. This damage can be caused by the neurotoxicity of the drug itself, its preservatives, or the pH of the drug (2). In this case, the patient had no complaints of pain after the injection. Mahmoud and Ammar (3) reported a mistaken injection of 300 mg tranexamic acid that was associated with injection site pain, hypertension, tachycardia, general myoclonic seizures, and cardiac arrhythmias as ventricular fibrilization, and the patient was eventually discharged from the hospital in good general condition. Ajmal reported an incidental injection of aminophylline during spinal anesthesia, which initially developed transient neurological symptoms after 48 hours, progressing to paraplegia and permanent nerve damage that lasted up to 2 years and resulted in death (4). Etomidate is an ultra-short-acting non-barbiturate anesthetic, which should only be injected intravenously, and it is suitable for patients with shock due to its low impact on the cardiovascular system and hemodynamics (3). The most important effect of etomidate is that it directly inhibits the enzymatic synthesis of steroid hormones, including corticosteroids (4). Etomidate stimulates the inhibitory effects of gamma aminobutyric acid (GABA) inhibitory neurotransmitters. In 30 to 60% of cases, it causes myoclonus movements during induction and increases seizure time (5). In this case, there was no convulsive movement and no change in the level of consciousness. There have been no reports of intrathecal injection of etomidate so far, and this is the first case to be reported. The most common cause of incorrect intrathecal injection occurs during drug and syringe preparation (6). In our case, due to the similarity between the 2 drugs, ropivacaine 0.5% (Bioindustria L.I.M., 5 mg/mL) and etomidate (Aburaihan, 20 mg/mL; Figure 1), the wrong drug was injected due to medical errors by the anesthesia resident and technician. 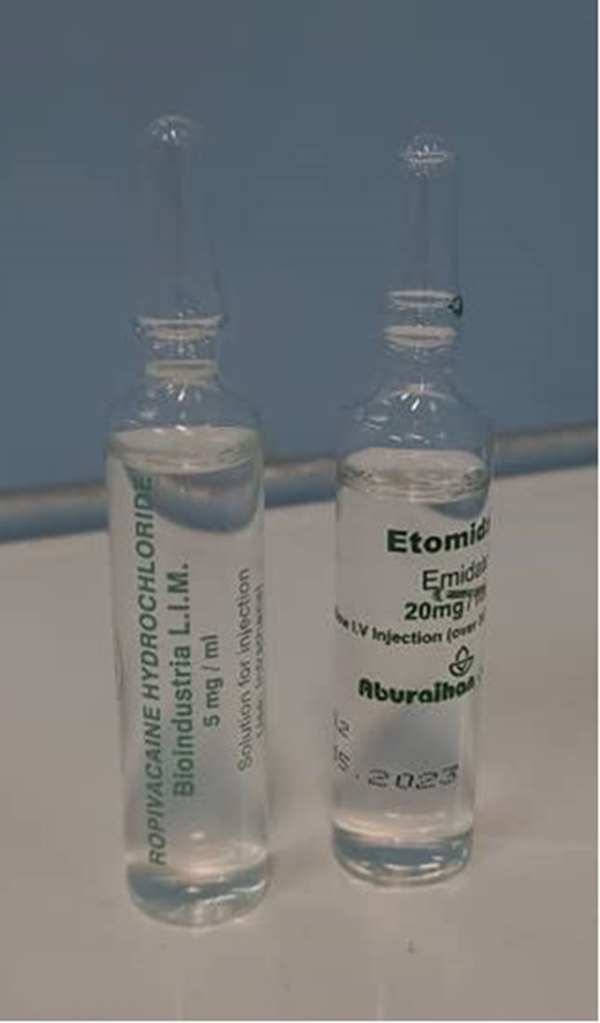 The similarity between the 2 drugs

Hemodynamic symptoms (such as hypotension or shock due to clinical manifestations) are commonly seen (7). However, in our case, we had no change in hemodynamic conditions, including blood pressure and heart rate. There have been several reports of death after unwanted intrathecal injections (8).

Management of patients with inadvertent drug injection varies based on the type and dosage of different drugs and unknown intrathecal complications. The most important principle in the management of these patients is to pay attention to hemodynamic stability and cerebrospinal fluid (CSF) lavage (9-11). A standard CSF lavage consists of about 10 to 20 mL of CSF fluid, which is gently withdrawn through a needle or catheter and replaced with preservative-free normal saline (12). It has been shown that CSF replacement with fresh frozen plasma can reduce neurotoxicity (13). In this case, since there were no clinical, hemodynamic, or neurological symptoms at the beginning and during the follow-up, instead of aggressive CSF lavage, a follow-up approach was implemented, and the patient was closely monitored to take appropriate action in the event of symptoms. The patient was discharged after 5 days without any extra complications.

The main cause of this complication and similar cases is failure to follow safety protocols before procedures. The most important solutions are labeling the syringe, double-checking, and injecting the drug immediately after filling the syringe (14, 15). Unfortunately, in this patient, the procedure was not checked and performed properly.

Also, the similarity of the medicine container increases the possibility of a wrong injection.

It is recommended that vital drugs, such as anesthetic drugs, be presented in a unique and specific way to reduce the possibility of incorrect injections due to human errors.

According to the results of the first random injection of etomidate into the spinal cord, which did not cause hemodynamic and neurological changes, further research may show the destructive or even protective effects of etomidate on neurons.

Copyright © 2023, Author(s). This is an open-access article distributed under the terms of the Creative Commons Attribution-NonCommercial 4.0 International License (http://creativecommons.org/licenses/by-nc/4.0/) which permits copy and redistribute the material just in noncommercial usages, provided the original work is properly cited.
download pdf 840.61 KB Get Permission (article level) Import into EndNote Import into BibTex
Number of Comments: 0