Rapid and secure management of airway is an important lifesaving intervention in critically ill patients at emergency wards. Training undergraduate students about airway management must be regarded as a priority in their education period. The aim of the present study was to compare the quality of three ventilation techniques with a bag and mask among two groups of undergraduate students (Novices) and senior group (Experienced) in Tabriz University of Medical Sciences.

This study was a mannequin type research that was carried out in the faculty of medicine, Tabriz University of Medical Sciences. The study population consisted of two elementary groups (Novices) and senior group (Experienced). The number of participants included 100 individuals. Ventilation quality by bag and mask in two groups was recorded based on the rise of lungs and two reviewers' opinions who gave a score from 1 as weak to 4 as excellent using three techniques of E-C, E-O, and Thenar Eminence. In the E-C technique, index fingers and thumbs form two “C”s facing each other while the remaining fingers lift the mandible and form two “E”s. In E-O techniques, the web between thumb and index finger is used to form a circle around the neck of the mask while other fingers perform a chin lift. In thenar eminence techniques, the thenar eminence and thumb are placed on the top of the mask while other fingers perform jaw thrust.

In our study, 27% of undergraduate participants and 59% of seniors were male and the others were female. The mean of age of elementary and seniors were 24 and 33.5, respectively (P < 0.05). E-O technique was well done by the novices group.

Based on our results, it was concluded that the elementary group performed E-O bag and mask ventilation technique appropriately. Therefore, it can be suggested that training of this technique will be placed in educational curriculum of undergraduate students.

Rapid and secure management of the airway is an important lifesaving intervention in critically ill patients at emergency wards (1). The importance of bag and mask ventilation (BMV) is not only among the patients who are under complete anesthesia, but also among those who need emergency airway management (2). The traditional bag and mask ventilation technique (E-C) by a person is unreliable due to air leaks around the mask and also doing ventilation process with bag and mask by inexperienced people (3). An appropriate mask doesn’t cover the patient’s eyes and also doesn’t extend down from the patient’s chin. In addition, the patient’s suitable position has an important role in a successful BMV (4). The tongue in unconscious patients is an obstructive factor when they need to be ventilated with BMV method. To overcome this problem, it is important to find an appropriate method of BMV. As it was explained, E-C has been recognized to be a standard technique of BMV. However, recently, other techniques such as thenar eminence (in which thenar muscles and first finger of reviver are on mask padding and his next four fingers surrounds mandible) and E-O (the 1st and 2nd finger of reviver are figured like O around mask entrance hole and next fingers surround the chin and mandible) have been introduced. Furthermore, some medical staffs are inexperienced in regards to the ventilation process; therefore, finding a simple and accessible way seems to be quite demanding (1-6). The aim of present study was to compare three BMV techniques of E-O, E-C, and thenar eminence among two undergraduate and professional groups. Ultimately, we can determine which method was carried out better in two groups.

This study was in a type of descriptive analytical study and was a mannequin ((Airway TrainerTM (Laerdal, Norway)) based research that was conducted in a skill laboratory of the faculty of medicine in Tabriz University of Medical Sciences, during a 6-month period (December 2014 - May 2015). The population included two groups of undergraduate (interns working in emergency medicine department who were inexperienced about BMV techniques) and professional groups who were mostly professors and senior residents of anesthesiology and emergency medicine departments and know about ventilation with bag and mask. Consent was taken from all participants for enrolling in the study. The exclusion criteria included participant’s dissatisfaction to participate. All attendants filled consensus form and the approval was obtained from training of medical students Ethical Committee of the university. Sample size was considered to be 100 participants for each group according to the following formula:

Whereas Zβ = 1.28, Zα/2 = 1.96, P2 = 0.90, P1 = 1. Considering 90% power, the sample size was calculated to be 95, which we finally included 100 samples. As it was pointed out, the population consisted of 100 intern students and 100 professionals. A week before the study the training workshop was held during 5 hours for the participants; all the participants trained for three different approaches for BMV. In this study we used the opaque curtain over mannequin to separate the mouth and nose from the chest. It was impossible for two assessors (professors of emergency medicine and anesthesiology) to see which BMV techniques were used by participants of study. Furthermore one of emergency medicine professors accompanied the participant who took the two hand BMV. He supervised over the appropriate position of the mask and BMV techniques. At the same time he was responsible to compress ambo for each technique and each ambo was done in a second. In sum, each participant did 6 ventilations with bag-mask (each of the methods 2 times: thenar eminence, E-O, E-C) (Figures 1 - 3). 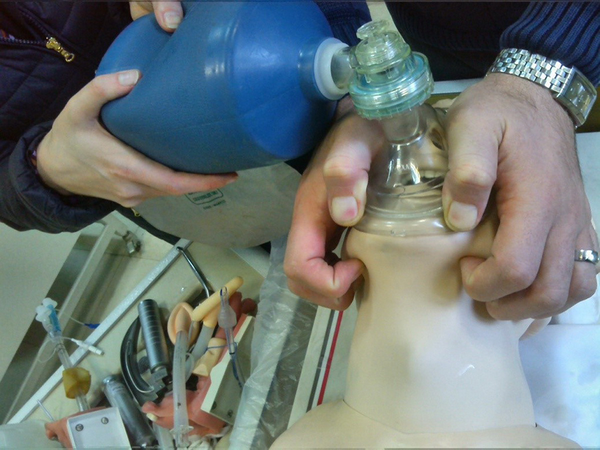 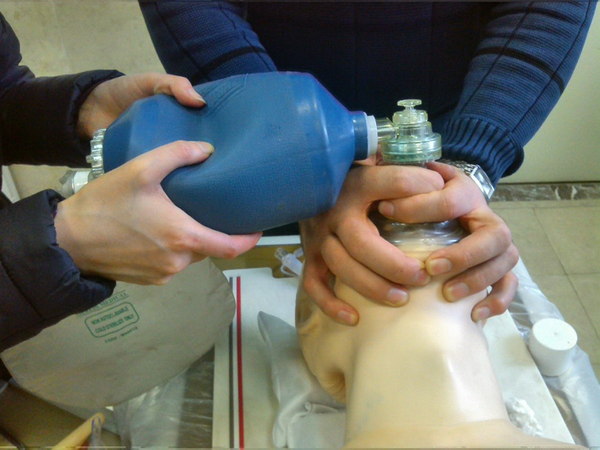 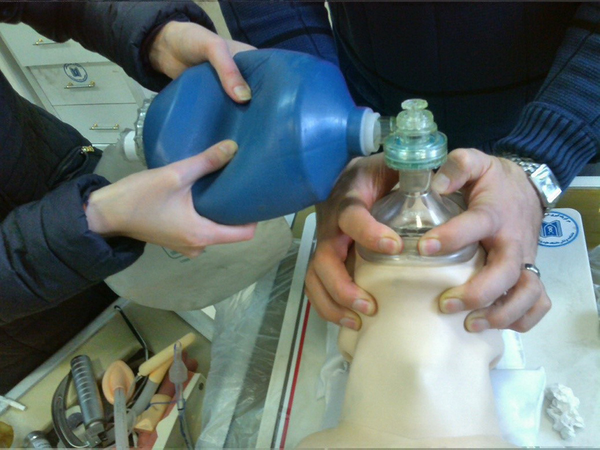 In this technique, thenar eminence and thumb of both hands are placed on the top of the mask while the remaining fingers of both hands perform jaw thrust. Ventilation is maintained by a second person.

By using the index fingers and thumbs of both hands, form two “C”s on the mask facing each other. Simultaneous downward pressure should be applied gently. Then, hook the mandible with the remaining fingers of your two hands in both sides and lift the mandible toward the mask to form two “E”s. Ventilation is maintained by a second person.

On the other side of the curtain, two assessors (anesthesiologist and emergency medicine specialist) assessed the BMV techniques based on the chest rise score from 1 to 4:

If the participant obtains a score of 4 from both assessors then he or she would be placed in the ideal group. In the case of scoring 3 from both assessors, 3 - 4, or 4 - 3 then he/she would considered to be in the average group and in the case of score 1 or 2 from both assessors; he/she would be placed in the weak group. Obtained data were then analyzed by SPSS (model number: 17.0.1, SPSS Inc, Chicago). We used descriptive statistical approaches (frequency, percentage, and mean ± SD). Normal distribution of data was examined with Kolmogorov-Smirnov test. We used the Chi square test and Linear-by-Linear Association test to analyze the qualitative data. For comparison of age variable between two groups we used Mann - Whitney U-test. We considered P-value less than 0.05 significant.

Table 1. Prevalence of Different Scores of Both Groups About Three BMV Techniques

Table 2. Prevalence of Different Scores of Both Groups About Three BMV Techniques by Sex

The scores of two assessors revealed that there was a logical agreement between them. The value of kappa agreement of Thenar Eminence, E-O, and E-C techniques were 0.47, 0.234, and 0.323, respectively (P-value < 0.0001). If the values of Kappa is low, there is fair and moderate agreement between the scores given by two reviewers based on the reference. In addition, we used the mean of two scores, which increases the bias.

The basic method to train medical students about control and management of airways was to use mannequins (7, 8). One of the important methods in training critical care medicine in regards to rare and complicated conditions was scenario oriented training with a computer-controlled patient simulator (9). In the present study, it was concluded that novice medical students performed the E-O technique better than two others. Airways management is one of the challenging issues in terms of critical patients. A patient would be detoriate or harmed if he/she becomes hypoxic or being inadequately ventilated (1, 5, 10-12). BMV is an urgent and necessary method to control the airway and ventilate the patient before the medical staffs prepare a secure one. To do an efficient BMV, appropriately covering the mouth and nose is necessary due to the fact that there are 3 main problems in BMV, which can be omitted by appropriate cover of mouth and nose. These problems are insufficient amount of air, inappropriate oxygenation, and gastric distention (13). During general anesthesia, decreasing the tonicity of oropharyngeal muscles result that tongue, epiglottis, and soft palate collapse and consequently obstruct the airway and finally difficult in BMV. It is even worse among patients who don’t have teeth in their mouth (14, 15). In an investigation by Golzari et al. (2), in regards to the comparison of techniques of ventilation with a bag and mask, they concluded that placement of the denture improved BMV in patients. Moreover, BMV was remarkably improved when the gauze was placed in the buccal area. Racine et al. (16), concluded that in toothless patients, application of lower lip face mask can prevent air leakage and cause improved BMV. Kumatsu et al. (17), showed that intern practitioners learn BMV faster than oropharyngeal intubation. Pastis et al. (18), in their study about training interns with BMV, resulted that computerized patient simulator was suitable to train BMV and its different methods. They reported high success when this tool was used. Moreover, Mayo et al. (19), pointed out using the computer-controlled patient simulator to train basic measurements of airway control to intern students would be adequately beneficial. Furthermore, based on the other study, we examined the facility of four different BVM ventilation techniques - E-C, thenar eminence, thenar eminence (dominant hand)-E-C (non dominant hand), and thenar eminence (non dominant hand)-E-C (dominant hand) - among two inexperienced and skilled groups and we conclude inexperienced participants did thenar eminence (non-dominant hand) - E-C (dominant hand) technique better than the others and this technique is suggested for training of medical students, also (20). The present study is in agreement with the Umseh et al. (3) study in its prioritizing E-O over E-C and thenar eminence technique. This study suggested training E-O technique for interns and beginners. However, it should be notified that our study has some advantages over the Umseh study, which are: 1) in our study ventilation procedure was done by two hands in a way that was subscribed by American Heart Society for BMV, 2) our sample size was higher, and 3) in our study we actually compared three techniques including thenar eminence as one novel method of BMV. Finally, in regards to our finding (novice participants performed the E-O technique better than the experienced ones), we can state that the more facility of E-O technique can explain this interesting finding and we observe it in the study; thus, the novice group appears to be more serious and determined than the experienced group.

Hence, our study had some limitations, where the most notable was the existing setting. It is better to have the study inside the operation room and on a living human to obtain more credible results. Additionally, pulmonary volumes were not measured in our investigation. The other limitation was that the method of assessment is prone to inter-observer variability and bias and also the age and sex between participants was meaningful, too.

Copyright © 2018, Author(s). This is an open-access article distributed under the terms of the Creative Commons Attribution-NonCommercial 4.0 International License (http://creativecommons.org/licenses/by-nc/4.0/) which permits copy and redistribute the material just in noncommercial usages, provided the original work is properly cited
download pdf 5.08 MB Abstract XML Get Permission (article level) Import into EndNote Import into BibTex
Number of Comments: 0