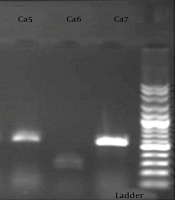 Candida species have an unstable resistance to common antifungal drugs. The treatment of oral candidiasis requires the identification of new anti-Candida agents with no side effects like medicinal plants.

The present study aims to investigate the antifungal effects of caspofungin and oregano essential oil on oral Candida species isolated from cancer patients.

Seventy-three Candida species were identified and isolated by conventional and microbiological tests from cancer patients (n = 100) suspected of oral candidiasis. The minimum inhibitory concentrations (MICs) of the oregano essential oil and caspofungin were determined by microdilution assay and evaluated according to the Clinical and Laboratory Standards Institute (CLSI-2017). The gene regions of samples were studied using the polymerase chain reaction (PCR) method.

Candida glabrata (35, 47.9%) was the predominant species. Most of the Candida strains were isolated from patients with stomach cancer (35, 47.9%). The highest resistance to caspofungin was reported for C. albicans (5.5%). Also, FKS mutant isolates were associated with resistance to caspofungin. MIC90 value for oregano essential oil against C. albicans was 4096 µL/mL, which was equal to MIC90 value against C. glabrata. There was a significant difference between the MICs of caspofungin and oregano essential oil, that inhibits the growth of Candida isolates.

The results of this study showed that the caspofungin has high antifungal effect on Candida species, specially non-albicans Candida. As the findings indicated, the oregano had good anti-Candida potent. Therefore, we could hope to treat fungal diseases by producing an appropriate herbal medicine.

The increased occurrence of oropharyngeal candidiasis in immunocompromised patients needs more studies. Candida albicans is often associated with oral infections in patients with cancer and drug addicts. Among all Candida species, Candida glabrata, is a significant pathogenic yeast in immune-compromised persons, such as cancer patients (1-3). Patients on chemotherapy or radiotherapy have been shown to have increased susceptibility to fungal infections. Studies have reported C. glabrata as the common non-albicans Candida species among cancer patients (4, 5). Due to the high mortality rate and reduced susceptibility of this species to azole drugs, echinocandins like caspofungin (CAS) are used in treating severe infections (6, 7).

Due to the increasing rates of oral candidiasis caused by albicans and non-albicans Candida species, studying the drug-resistance frequency and related causes seems necessary (11). Nowadays, scientists pay particular attention to using herbal and traditional medicine too. Medicinal plants have been effectively used for treatment and prevention of infectious diseases. Oregano (Origanum vulgare) is a native plant in Iran cultivated in the northern and western provinces of the country. Oregano essential oil has antimicrobial and antioxidant properties due to its essential oil components, such as alpha-thujene, alpha-pinene, octanone, and thymol (12). Researchers studied the antibacterial effects of oregano in 2020. This research demonstrated that the essential oil of oregano had antibacterial and anti-biofilm forming effects on the Streptococcus mutans isolates (13).

The present study aimed to evaluate and compare the inhibitory effects of caspofungin and oregano essential oil on oral Candida isolates taken from cancer patients, as well as to investigate the molecular pattern in caspofungin-resistant isolates.

In this study, a total of 100 saliva samples were taken from cancer patients with symptoms of oral candidiasis, such as erythematous lesion, ulcers, and pain, from December 2019 to June 2021. The cancer patients were on chemotherapy and/or radiotherapy and had been admitted to three hospitals in Golestan province, Iran. The saliva samples were collected without stimulation. The study procedures were performed according to medical ethics standards. A written informed consent was obtained from all patients. The demographic data, including age, gender, and clinical history of cancer were documented for each patient. Candida isolates were identiﬁed by conventional morphological and biochemical methods (14, 15). Finally, Candida species was conﬁrmed by polymerase chain reaction (PCR) according to company protocol of Candida spp. detection kit (Iranian Gene Fanavar Institute, Iran) using 18S rRNA universal primers (14).

After collecting and identifying the oregano (Origanum vulgare) leaves around Gorgan in northern Iran, the aerial parts of the plant were cleaned and dried in the shade in a ventilated greenhouse at 30°C. After drying, the plant limbs were crushed into small pieces by a Moulinex model mill made in Spain. After sieving by Pars laboratory sieve (Testsieve-Mesh No.), one gram of each was weighed with a digital scale of Sartorius model made in Germany with an accuracy of 0.001 g. After extraction of oregano leaves, it was saturated with 70% ethanol at a ratio of 1 to 10. Using the rotary evaporator and maceration assay, ethanol was evaporated, and the essence was prepared. Finally, the mixture was filtered using a Whatman filter paper No. 2, USA and stored at 4°C until use.

To determin minimum inhibitory concentration (MIC) and obtain a concentration of 8 - 4,096 µL/mL, the oregano essential oil was dissolved in dimethyl sulfoxide (DMSO). The antifungal effect of different concentrations of essence against Candida isolates was determined by broth microdilution method. After incubation at 35°C for 48 hours, the fungal MIC raised to 50% or 90% compared to positive controls, considered as MIC50 and MIC90, respectively. The negative control well contained the stock with RPMI, and the positive control well contained RPMI with yeast suspensions (13). Candida albicans ATCC90028 was used as the reference strain.

In microdilution broth test, a yeast suspension (103 CFU/mL) was prepared in RPMI 1640 spectrophotometrically (with glutamines, without bicarbonate, and with PH indicator, Sigma-Aldrich, USA). The concentration range of caspofungin stock (Basel, Switzerland) was 0.03 - 8 µg/mL (16). After preparing a serial dilution from caspofungin and inoculating yeast suspension to wells, the microplates were incubated at 35°C for 48 hours. The wells with yeast suspension and drug stock were used as the positive and negative controls, respectively. According to the standard CLSI M27 (17), strains with MIC > 2 µg/mL and MIC ≤ 2 µg/mL were considered as non-sensitive and sensitive to caspofungin, respectively. C. parapsilosis (ATCC22019) and C. krusei (ATCC6258) were used for quality control.

DNA of caspofungin-resistant isolates was extracted by glass bead/phenol–chloroform method. DNA was used as a template for fks1 gene amplification using FKSI-F1719 and FKSI-R2212 (18) (Table 1). Amplification was programmed for an initial denaturation at 94°C for 5 min, followed by 35 cycles of denaturation at 95°C for 30 seconds, annealing at 57°C for 30 seconds, extension at 72°C for 1 min, and a final extension at 72°C for 3 min. The PCR products were electrophoresed on 1% agarose gel, and the bands were visualized under UV light after staining with ethidium bromide.

All data were analyzed using chi-square test (SPSS 16.0 version). Either chi‑square or Fisher’s exact test was utilized to analyze the relations between variables. A P-value less than 0.05 was considered as statistically significant.

Table 2. Abundance of Candida Species and Distribution of Demographic Characteristics in Cancer Patients

b Statistical accuracy of the test.

The comparative in vitro susceptibilities of the Candida isolates to the antifungal agents showed that the MIC50 value for caspofungin against C. glabrata was 2 µg/mL in comparison with the range of reference strain (MIC = 0.25 µg/mL) and was 2-fold higher than MIC50 against C. albicans. Six (8.2%) isolates included C. albicans, and C. glabrata were non-sensitive to caspofungin (MIC > 2 μg/mL). MIC90 value for oregano essential oil against C. albicans was 4096 μL/mL, which was equal to MIC90 value against C. glabrata (Table 3). Comparison of the efficacy of the caspofungin and oregano essential oil against Candida isolates showed a significant difference between these agents.

Table 3. Minimum Inhibitory Concentration of Caspofungin and Oregano Against Candida Species a

a Values are expressed as µg/mL.

b Values were defined as the lowest concentration of the antifungal agents at which the growth of fungi were inhibited in 50% and 90% of the isolates, respectively.

The changes to the MIC of oregano essential oil against C. albicans showed that the difference between growth and non-growth of caspofungin-resistant isolates was not significant (Table 4). The average MIC of oregano essential oil in comparison with caspofungin against C. albicans and C. glabrata was reported at 3015 µg/mL, in which the most growth fluctuations were seen in densities of 256 and 512 µg/mL.

Table 4. Comparison of the Growth and Non-growth of Candida Species in the Presence of Oregano Essential Oil

a Significant difference between the Candida species based on the chi-square test.

4.3. The fks1 PCR in Caspofungin-Resistance Isolates

Studies show that opportunistic infections, like oral candidiasis caused by Candida species, have increased significantly. Although C. albicans is the predominant yeast, there have been reports of candidiasis caused by other Candida species such as C. glabrata. The decreased immune system leads to host susceptibility to pathogens. Cancer can affect the immune system directly through chemotaxis (19). One of the antifungal agents with the high antifungal activity range belongs to the group of echinocondins like caspofungin (20).

The present study was conducted on 100 cancer patients with suspected oral candidiasis. The results showed that from 73 Candida isolates, about 47.9% belonged to C. glabrata. Thus, C. glabrata was the predominant species of oral candidiasis in patients with cancer, and 22 (30.1%) cases were taken from patients with stomach cancer. Of these patients, 15 individuals had reoccurrence of the infection despite receiving antifungal treatments. Researchers identified seven caspofungin-non-susceptible Candida strains (three C. tropicalis, two C. glabrata, and two C. albicans) from 650 Candida isolates from hospitalized cancer patients (21). In present study, six (8.2%) cases showed resistance to caspofungin, out of which two (2.7%) cases belonged to C. glabrata. A study proved that caspofungin had more activity against oropharyngeal non-albicans Candida species (5). According to studies, aminocandin has the potential for extended interval dosing in the treatment of infections caused by C. glabrata (22). Based on the results of the present study, the prevalence of oral candidiasis by non-albicans Candida species is increasing and these species have a potential to reduce susceptibility to antifungal agents. Although caspofungin has a good potent, unfortunately resistance to it among fungi is increasing due to mutation in their structural and regulatory genes, such as fks1 gene (23-25).

In a study by Balashov et al., the reason for caspofungin-resistant among 85 C. albicans isolates studied was reported to be mutation in their fks1 gene (18). In research by Desnos-Ollivier et al. (26) from a total of twenty-five C. albicans isolates, the mutation was reported in 8 isolates. In the present study, all of caspofungin-resistant isolates contained fks1 gene.

The high prevalence of drug-resistant Candida species has emerged in recent years, so it requires the identification of new anti-Candida agents with no side effects or toxicity like medicinal plants. Due to their low toxicity and ease of absorption, medicinal plants have been used all around the world for numerous diseases since a long time. In this regard, there is a long history of applying herbal medicine for treating diseases in Iran (27). In current study, we diagnosed the antifungal virtues of oregano essence as an important medicinal plant. A study indicated that oregano essential oil exerted relatively favorable antimicrobial effects against S. mutans in vitro and in vivo conditions (13).

According to our results, caspofungin had more antifungal effects on C. glabrata than C. albicans. The detection of mutations in fks1 by DNA sequencing can predict drug-resistance of Candida strains with high sensitivity. However, further research on the approved caspofungin-resistance seems necessary in the future. As the findings indicated, the oregano had good anti-Candida potent. In our study in identical concentration, oregano essential oil had better antifungal activity on C. albicans compared to C.glabrata isolates, but there was a significant difference between the MIC of caspofungin and plant essence. Hence, fungal diseases might be treated by producing an appropriate herbal medicine.