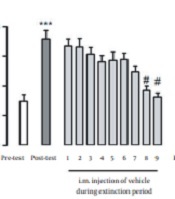 Sex-related differences in the incidence, prevalence, symptoms, and side effects of drug use, especially narcotics, have been previously shown in animal models and human studies.

In the presents study, the effects of different doses of testosterone on morphine extinction period were investigated in a rat model.

Forty mature male Wistar rats were randomly allocated to four categories (10 in each group), including control (received intramuscular injection of vehicle) and testosterone (received intramuscular injection of testosterone at 1, 2.5 and 5 mg/kg) during the extinction period. Conditioned place preference (CPP) test was done to assess the psychological phenomena of drug craving and relapse. The CPP score was calculated in five stages, including the baseline (preconditioning), acquisition (conditioning), expression (postconditioning), extinction, and reinstatement.

Our results demonstrated that testosterone (1, 2.5 and 5 mg/kg) significantly extended morphine extinction duration compared to the control group. It has been shown that dopamine neurotransmission in mesocorticolimbic system is affected by testosterone through androgen receptors in adolescence and alteration in testosterone level could affect drug use vulnerability.

It seems that normalization of testosterone levels reduces the symptoms of opioid withdrawal syndrome and have important clinical implication for clinicians to understand the effects of testosterone dysregulation on the extinction and withdrawal periods.

Sex-related differences in the incidence, prevalence, symptoms, and side effects of drug use, especially narcotics, have been previously reported in human studies and animal models (1-5). The interactions of various biological, environmental, sociocultural, and developmental factors influence sex differences in addictive disorders (3, 5). In addition to the sex-related differences in substance use, there are sex differences in pain perception, sensitivity and analgesic response to opioids (6, 7). These are attributed to several factors, such as sexual dimorphisms in the brain, endocrine (eg, ovarian hormones), and metabolic systems (8), and most importantly, differences in the levels of sex hormones, especially testosterone. Elevated levels of testosterone has been shown to increase the symptoms of opioid withdrawal syndrome (9). Moreover, the effect of hormonal factors on the onset, persistence, and relapse of substance use have been emphasized in patients, suggesting hormonal factors as the cause of substance use (10).

Opioid use can induce changes in testosterone levels and suppresses sex hormones in the blood by increasing testicular oxidative stress (10). Moreover, substance use is among factors that can cause reversible hypogonadism, which is a situation that testicles cannot produce sufficient levels of testosterone and/or a normal sperm count (11). Testosterone levels in men are suppressed by the regular use of opioid, regardless of the type of opioids (12). However, considering the disagreements among researchers, the role of testosterone in addiction remains unclear (13). In a previous study, the effect of morphine on dopamine release and behaviors was shown to be similar in rats treated with testosterone. It seems that exposure to sex hormones may facilitate addiction to opioids like morphine and heroin in adulthood (14).

Regarding the interactions of the testosterone level with drug use, this study was performed to investigate the effect of different doses of testosterone on the extinction period of morphine-induced CPP in male rats.

40 male Wistar rats (weight 200 - 250 g) were provided from Royan Institute (Tehran, Iran). To avoid the potential effect of hormonal variations, we did not use female animals. All animals were placed in a standard room and a 12:12 h light/dark cycle (7:00 a.m. to 7:00 p.m., lights on) was administered, with the temperature set approximately 20ºC. Four animals were kept in one cage with no restriction concerning access to food and water. All stages of the study were conducted based on the guidelines of the Ethics Committee of Tehran University of Medical Sciences (Ethical No: IR.TUMS.VCR.REC.1397.848) to minimize animals suffering. The animals were randomly allocated to four categories (n = 10): control and the testosterone groups.

The animals were randomly allocated to four categories (n = 10), with no baseline preference to CPP chambers. All groups received morphine in three consecutive days [3, 5 and 7 mg/kg, intraperitoneal (i.p.) respectively] in the conditioning phase. The conditioning score was calculated as the percentage of time the animals spent in the drug paired compartment in the test day. During the extinction days, each group received the following treatments: vehicle or testosterone [1, 2.5, 5 mg/kg, intramuscular, (i.m.)]. The day after extinction phase, a priming dose of morphine (5 mg/kg, i.p.) was injected to animals to induce reinstatement. Then all subjects were tested in the CPP arena for 20 minutes. (Figure 1).

The psychological phenomenon of drug craving and relapse were evaluated using the CPP test. The test contained five stages, including the baseline (preconditioning), acquisition (conditioning), expression (postconditioning), extinction, and reinstatement. Plexiglas CPP boxes of two equal sizes, with various patterns of side compartments (30 × 30 × 40 cm) were used in an unbiased model. Noteworthy, the model had a connecting null compartment with a removable sliding door. All rats could habituate to the experimenter handling and the CPP arena the day before performing the CPP.

On day 1 (the baseline phase), in order to determine the baseline side preferences, all animals could roam freely between compartments for 20 minutes. The Etho-Vision software (Version 3.1) was used to record the time spent in each compartment. This software is a video tracking system for automation of behavioral experiments (Noldus Information Technology, The Netherlands), and well as a 3CCD camera (Panasonic Inc., Japan) placed above the CPP box. All subjects that presented a prominent preference for a specific compartment (> 65% in a side compartment or > 45% in the null compartment) were removed. Afterward, to determine place conditioning, the rats were randomly bounded to one of the two chambers. This stage was initiated the day following the preconditioning stage, which contained six conditioning sessions (20-minute sessions, three sessions with vehicle and three sessions with drug pairing) in a three-day schedule. All sessions were provided two times per day (one days 2 - 4) with four-hour intervals, in which each group received conditioning sessions with morphine (Temad Company; 3, 5, and 7 mg/kg i.p. on days 2 ‐ 4, respectively) and vehicle on each day, ie, one in the morning and one in the afternoon. On day 5, the post-conditioning day, all animals were evaluated in a drug-free trials for 20 minutes. Noteworthy, there was no restriction concerning access to all CPP compartments, similar to day 1, during the expression stage.

The CPP score indicates the duration of staying in the drug-paired compartment divided by total time spent in vehicle-paired and drug-paired compartment during a 20-minute period. Following the CPP paradigm, during the extinction phase (day 6 and later), the rats were placed in CPP apparatus with vehicle injection. Noteworthy, the conditioning score was calculated on each day. All rats received this procedure until the CPP scores of two consecutive days in extinction period were equal to those on the preconditioning day.

During the reinstatement phase, a priming dose of morphine (5 mg/kg i.p.) was injected to all rats, followed by testing the CPP arena for 20 minutes. (Figure 1).

4.1. Induction of the Conditioned Place Preference

The CPP was induced by i.p. injection of 3, 5, and 7 mg/kg of morphine. The CPP score was significantly enhanced in post-test day in comparison with the pre-test day (P < 0.001) (Figure 2A). The statistical analysis showed that conditioning to the morphine-paired chamber was disappeared gradually and rats were extinguished on days 8 and 9. 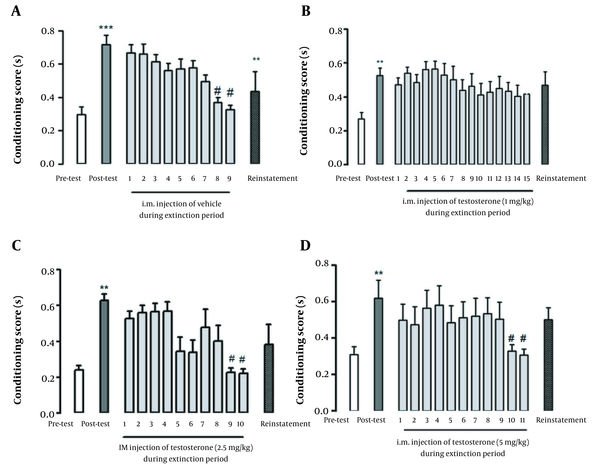 4.2. Effect of Different Doses of Testosterone During the Extinction of Morphine-induced CPP

More than 20 million people are affected by drug addiction worldwide (15). Despite the high incidence and prevalence of this problem, there are still many ambiguities about the disease. Various factors are known to affect the onset, continuation, and recurrence of drug addiction, including environmental, genetic, and sex-related factors (16). Sex hormones play a special role in gender differences in the incidence and prevalence of diseases. Particularly, testosterone has significant impacts on the course of addictive disorders. In the present study, for the first time, the effects of different doses of testosterone were investigated on the duration of extinction from morphine in an animal model. For this purpose, we employed the CPP method, which is a known model for studying reward-related behaviors in various human and animal (eg, mice, planaria, primates, and butterflies) (17-21).

Previous studies have indicated the widespread cognitive effects of testosterone, such as verbal fluency, visuospatial and visuoperceptual abilities, and memory and executive function (2). Testosterone at different doses has been reported to exert different effects, particularly in terms of cognitive function (22, 23).

Previous studies have shown that testosterone can activate the reward pathway similar to morphine (24). Androgens indirectly trigger the reward system and are able to prolong the extinction from opioid-induced CPP as observed in rats received testosterone in the present study. On the other hand, it has been shown that testosterone effects on memory and cognitive functions are not strictly dose-dependent or linear but follow a U-shaped pattern (25). In other words, while low and high doses of testosterone improved memory function, moderate doses of testosterone were reported to impair memory. In the present study, testosterone at doses of 1 and 5 mg/kg prolonged the extinction period compared to the control and 2.5 mg/kg testosterone groups. There are several studies indicating that agents like testosterone which are able to affect memory and cognitive functions can potentiate drug-induced craving (26, 27).

Studies in rodents and humans has documented a reverse and antagonistic interactions between testosterone and oxytocin systems (28, 29) Oxytocin is one of the factors that influence the opioid withdrawal duration (30). Studies have reported that elevated oxytocin levels can diminish opioid withdrawal and shorten the extinction period; however, excessive levels of oxytocin have been shown to not only have no positive effects on this process but may also have inverse impacts due to an increase in anxiety (31). Very high levels of oxytocin are associated with low levels of testosterone, and in our study, the longest extinction period was related to the group receiving lowest level of testosterone. Low levels of testosterone, similar to excessive levels of oxytocin, could enhance anxiety and stress (32), and anxiety can extend the withdrawal period and cause persistent drug use (33).

Different substances affect the hypothalamic-pituitary-adrenal (HPA) axis and the autonomic system’s responses, impairment of which would affect the onset and recurrence of drug abuse (34). The results of our study may also be justified by the interaction of testosterone, as one of the end products of the HPA axis, with the hormones involved in this axis (eg, cortisol, as a hormone that modulates anxiety and stress) (35). Therefore, these interactions can be associated with changes in testosterone levels, ultimately increasing risky behaviors (35). Testosterone and cortisol levels are inversely related (36). Studies have shown the effects of cortisol administration on the duration of withdrawal and relapse of drug use (15). Glucocorticoids, including cortisol, play an important role in modulating memory function. The glucocorticoids released during stressful events play an important role in stabilizing and enhancing new memories and fading previously stored memories (37). High levels of cortisol are released during the withdrawal period (38), contributing to the shortening of the withdrawal period (15). In fact, any factor that reduces cortisol levels can prolong the extinction period, which may explain the longer extinction period in the group treated with 5 mg/kg testosterone compared to the control and 2.5-mg/kg testosterone groups.

Testosterone modifies reward related behaviors in both adult animals and humans. The present study assessed the impact of different doses of testosterone on extinction period of morphine-induced CPP in male rats. Testosterone could prolong extinction period. Our data support the ability of androgens to modulate mesocorticolimbic dopamine level in adolescence. It can be concluded that adjusting testosterone levels could reduce the symptoms of opioid craving and withdrawal syndrome. These findings may have important clinical implications for clinicians to understand the effects of testosterone dysregulation on the extinction and withdrawal periods.

Copyright © 2022, Author(s). This is an open-access article distributed under the terms of the Creative Commons Attribution-NonCommercial 4.0 International License (http://creativecommons.org/licenses/by-nc/4.0/) which permits copy and redistribute the material just in noncommercial usages, provided the original work is properly cited.
download pdf 446.66 KB Get Permission (article level) Import into EndNote Import into BibTex
Number of Comments: 0