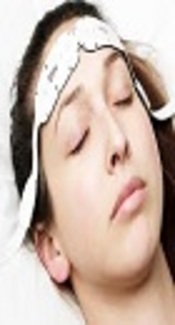 The present study was conducted to evaluate the cerebral oxygen saturation (rSO2) difference between female and male patients before induction of anesthesia and during anesthesia in neurosurgical procedures.

A total of 120 patients scheduled for elective neurosurgeries were enrolled in this prospective cohort study. SpO2, end tidal CO2 (EtCO2), and bilateral frontal rSO2 values were recorded during (1) the baseline (BL), (2) after raising FiO2, (3) after induction of anesthesia (Ind), (4) after tracheal intubation (after intub), (5) before positioning (pre-pos), and (6) after positioning for each patient at 1, 5, 15, 30, and 60 minutes after positioning.

A total of 111 patients were included for statistical analysis; of whom 59 were female and 52 were male. The mean age was 45.2 years for women and 47.7 years for men. Hemoglobin concentration was statistically lower in female patients. (12.5 ± 1.3 vs 13.6 ± 1.3, P value < 0.05). The measured values of rSO2 in every recorded time showed a statistically significant difference in rSO2 values between female and male patients from the baseline (BL) until 60 minutes after positioning. There was not any significant correlation between age and rSO2 (r = -0.003, P = 0.997) or BMI and rSO2 (r = 0.05, P = 0.965). No significant difference was obtained between right and left side rSO2.

This study revealed that even after reducing the confounding role of hemoglobin, measured values of rSO2 were lower in the female group undergoing neurosurgical procedures.

Maintenance of cellular perfusion and oxygenation is an important goal in clinical practice for every anesthesiologist.

This may be even more prominent during neurosurgical procedures when patients are prone to tremendous hemodynamic fluctuations.

Pulse oximetry (SpO2) was traditionally used to measure blood oxygen saturation in peripheral arteries but will not provide additional information on tissue oxygenation.

Cerebral oximetry, based on near infrared spectroscopy (NIRS), has been shown to be beneficial on evaluation of cerebral oxygen saturation (rSO2) (1, 2). It should also be acknowledged that brain as an index organ to monitor global oxygenation and perfusion is clinically valuable (3).

The accuracy of cerebral oximetry to detect cerebral tissue desaturation has been found to be as precise as invasive methods based on previous studies (4).

The effect of such factors as age and position and BMI on cerebral oximetry readings have been studied previously (5, 6).

The neuroprotective role of estrogen and sex hormones has been accepted generally and is still the subject of many clinical investigations. Women’s brain in reproductive period is more resistant to ischemic injury than men with the same age (7-9). A list of protective mechanisms of female sex hormones, such as prevention of cell death and apoptosis, axonal sprouting and anti-inflammatory effect, has also been proposed as the underlying mechanism (10, 11).

The hypothesis of the present study was that gender may affect cerebral rSo2 readings and that rSo2 is different in female patients in comparison to male patients.

The primary outcome was to study cerebral rSO2 differences between female and male patients before induction of anesthesia and during anesthesia in neurosurgical procedures.

After approval from the medical ethics committee, informed consent was obtained from all the patients. Then, 120 patients scheduled for elective neurosurgeries were enrolled in this prospective cohort study. Patients with American society of anesthesiologists (ASA) class ≥ 3, previous history of brain surgery, cerebrovascular disease, and carotid artery stenosis were excluded from the study. Demographic data, hemoglobin (Hb) levels, body mass index (BMI), positive history of chronic hypertension, ischemic heart disease (IHD), chronic hypertension (HTN), diabetes mellitus (DM), and use of a beta blocker agent were recorded before the day of surgery by an anesthesiologist.

The lungs were mechanically ventilated to maintain Etco2 between 30 - 35 mmHg. Two cerebral oximeter sensors (Invos 5100 Somanetics, Troy, MI) were placed bilaterally about two centimeters above eyebrows on the patient’s forehead. The baseline rSO2 was recorded while the patient was breathing from room air and before receiving any anesthetic medication.

Differences in rSO2 values measured at the different times were compared using the paired t test with Bonferroni correction for multiple comparisons. To determine the relationship between rSO2 and patient variables, linear regression analysis was performed. The Bland and Altman test was also used to compare the values of rSO2 measured at the right and left side. P < 0.05 was considered statistically significant.

In this study, 120 patients scheduled for elective craniotomy were included. Sudden frontal probe detachment or cable disconnection, which was not possible to be reconnected during the surgery, caused exclusion of 4 cases. Data registration failure by the research assistants led to exclusion of 5 other patients from the study, and finally 111 patients were included for statistical analysis. Of the patients, 59 were female and 52 were male. The mean age was 45.2 years for females and 47.7 years for males.

Table 1 demonstrates the demographic data of patients. There was not any statistically significant difference in age, BMI, prevalence of diabetes mellitus, ischemic heart disease (IHD), hypertension (HTN), and beta blocker intake between female and male groups, but not surprisingly, hemoglobin concentration was statistically lower in female patients (12.5 ± 1.3 vs 13.6 ± 1.3, P value < 0.05).

aValues are expressed as mean ± SD or %.

Mean arterial pressure (MAP) values of female and male patients did not show any statistically significant differences in recorded times from baseline until one hour after positioning (Figure 1). 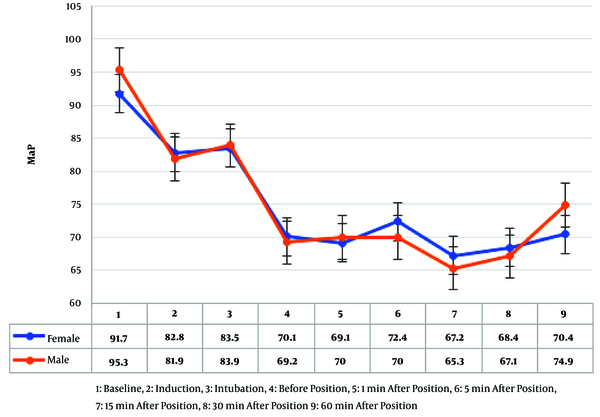 Moreover, rSO2 values was measured at different times during anesthesia, which showed a gradual elevation after preoxygenation and an increase in FiO2, while showing a decrease after reducing FiO2 level to 0.5 afterward.

No significant difference was observed between the right and left side rSO2 (Figure 2).

Figure 2. sSo2 values in right and left side

The measured values of rSO2 in every recorded time showed a statistically significant difference in rSO2 values between female and male patients (Figure 3). 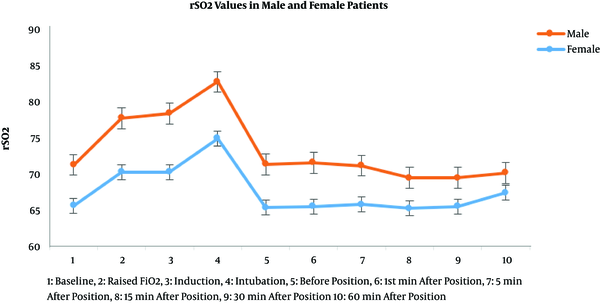 Figure 3. srso2 levels in female and male patients during anesthesia

The main aim of this study was to evaluate the difference in rSO2 readings between female and male patients before induction of anesthesia and during surgery in patients who were candidates for elective craniotomy.

This study revealed a significant difference between female and male rSO2 levels before and after induction of anesthesia and until 60 minutes after positioning.

We searched PubMed, google Scholar, and Scopus but did not find any studies on comparison of rSO2 or cerebral perfusion indexes between females and males, however, we found many studies on the protective effects of female sex hormones on brain cells.

Although the normal rSO2 in a healthy adult may be around 60% to 70%, representing a venous weighted measure of cerebral tissue oxygenation, values as low as 35% are sometimes seen in elderly patients, which may be a significant predictor of poor outcome (5).

Changes in cerebral rSO2 have been shown to be independently related to factors reflecting cerebral oxygen delivery, such as Hb, cardiac output, PaCO2, and pH (6).

In the present study, the level of serum Hb was lower in female patients compared to the male patients (12.5 ± 1.3 vs 13.6 ± 1.3), which may be the cause of lower cerebral rSO2 levels in this population. However, the linear regression analysis showed a definite role of gender in addition to Hb levels on cerebral rSO2 values.

Epidemiological and basic science studies have shown that estrogen plays an important role in neuroprotection, however, proving this finding in clinical studies is very challenging. Neuroprotection is not a single phenomenon and it should be considered as a multifactorial issue. Estrogen may directly promote cell survival and synaptic plasticity by preventing axonal and dendritic pruning, and indirectly by reducing cholesterol level and altering immune system (12-14).

One of the major limitations of the present study was the fact that it was a single centered study and due to small number of patients undergoing neurosurgical surgeries in the sitting position, we believe that a more powered study with more patients is beneficial.

Lower rSO2 in female population before receiving any anesthetic medication and during anesthesia may be related to the lower level of Hb. On the other hand, neuroprotective effects of estrogen in this group may also play a protective role against lower levels of cerebral tissue oxygenation.

Although according to the results of this study rSO2 levels and, perhaps cerebral perfusion, were lower in female patients, it may be a normal physiologic variation without any functional neurologic sequela because of the neuroprotective role of female sex hormones.

In conclusion, this study revealed that even after reducing the confounding role of hemoglobin, the measured values of rSO2 were lower in females undergoing neurosurgical procedures.