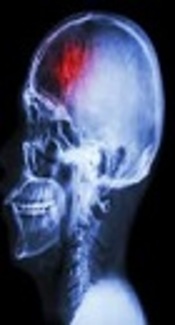 Traumatic brain injury (TBI) is a major cause of death and disability globally, and serum sodium disorders are the most common and probably the most poorly understood electrolyte disorders in neurological diseases.

The aim of this study was to evaluate the serum sodium level and its disorders including hyponatremia and hypernatremia in patients with TBI and evaluate the sodium levels at the time of admission, the first week, and the second week after admission.

This observational prospective descriptive-analytic study included patients with TBI admitted to the intensive care unit (ICU) of Saint Al-Zahra hospital, Isfahan, Iran during 2015 - 2016. Patients’ demographic factors, hemodynamic and paraclinical data were documented in the information forms and imported to and analyzed using SPSS v.22. All of the statistical tests were conducted at an error level of 5%.

The mortality prevalence of patients with TBI admitted to the ICU who have dysnatremia is high and can increase the risk of mortality remarkably. The mortality risk of hypernatremia is significantly higher than that of hyponatremia.

Traumatic brain injury or TBI is a major cause of death and disability globally. Sodium disturbances are common in patients with brain injury because of the major role that the central nervous system plays in the regulation of sodium and water homeostasis. In addition, treatment of the injured brain can itself disturb the regulation of sodium. In addition, serum sodium disorders are the most common and probably the most poorly understood electrolyte disorders in neurological diseases (1-3). Although TBI has been recognized as an untreatable term and predicts the mortality, the progress in trauma care systems, including pre-hospital care and intensive care, improves the survival of traumatic patients (4). Patients with severe cerebral trauma have a high risk of developing dysnatremia over the course of admission to the intensive care unit (ICU), which is due to predisposing conditions such as sensory disturbances, changes in thirst, central diabetes insipidus alongside polyuria, and increased imperceptible water loss (5). In addition, these patients often receive mannitol and hypertonic saline solution for the purpose of reducing cerebral edema and controlling intracranial pressure (6). The occurrence of brain death is accompanied by the occurrence of subsequent events in the body. Hemodynamic and electrolytic disorders of hemostasis, as well as various hormonal disturbances, may occur in these patients (7). Therefore, the awareness of these disorders in order to prevent and resolve them with the aim of the patient’s survival is of special importance. Considering that disorders of hemodynamic, coagulation, electrolyte (especially Na disturbances), blood sugar, and hormonal systems can cause a large percentage of patients with brain death, it is necessary to identify these disorders to prevent and treat them (8).

Serum sodium concentration in humans is typically between 135 and 145 mEq/L. Hyponatremia with a sodium concentration of less than 135 mEq/L means an increase in the ratio of total water to sodium and is seen in various medical conditions such as congestive heart failure, liver disease, and syndrome of inappropriate antidiuretic hormone secretion. Hyponatremia is the most common electrolyte disorder in hospitalized patients, and in some cases, up to 30% of patients are involved. The risk of death during the hospitalization period is increased by 50% in patients with hyponatremia compared to patients with normal serum levels (5, 6). On the other hand, sodium increase can also be due to dehydration, congestive heart failure, Cushing’s disease, liver failure, high sodium diet, osmotic diuresis (secondary to hyperglycemia), azotemia, medications (such as contrast agents, mannitol, etc.), or central diabetes insipidus (DI) or nephrogenic DI (2). As a water balance disorder, Hypernatremia is seen in 6 - 9% of very ill patients and is associated with increased mortality risk (6).

Sodium disorder occurs by the onset of brain death in many patients. Brain death is one of the most important complications coming after TBI, which is associated with many changes in hemodynamics, homeostasis, and other disorders, and recognition of these disorders is important in identifying the brain death patients who are organ donor candidates. Therefore, the identification of markers that could predict the occurrence of brain death in patients in order to carry out therapeutic procedures and prevent the destruction of organs that can be donated seems indispensable. However, not many studies have been still conducted regarding this issue. This is while evaluating dysnatremia in patients with TBI and its relation to the occurrence of mortality is necessary.

Therefore, the aim of this study was to evaluate dysnatremia and its relation to the occurrence of mortality in patients with TBI.

This is an observational prospective descriptive-analytic study. All patients with moderate to severe TBI admitted to the ICU of Saint Al-Zahra hospital, Isfahan, Iran during 2015 - 2016 took part in this study. The sample size was calculated using the same formula for sample size estimation used in studies of prevalence and considering the confidence interval of 95%; hypernatremia prevalence in TBI patients due to the lack of a similar study was considered 0.5 and acceptable error rate of 0.1 was used. Thus, the sample size was estimated to be 95, and in order to achieve more reliability, 100 patients were studied.

The inclusion criteria consisted of patients with TBI admitted to the ICU of Saint Al-Zahra hospital. The informed consent of the patient’s companions for participating in the study was acquired. Exclusion criteria consisted of patients with underlying renal diseases, patients admitted to the emergency unit for more than 48 hours, and patients companions not willing to participate in the study. In addition, patients that presented other potential causes of sodium disorders and systemic trauma (especially abdominal and orthopedic trauma because of that these lesions often involve blood loss and need resuscitation with saline solution) were excluded from the study. The hypertonic saline solution was not used in our cases. They did not receive diuretics and were free from renal or other endocrine diseases; in addition, patients with mild (Glasgow Coma Scale or GCS > 13) TBI were not considered in the study.

100 patients (Figure 1) who met the inclusion criteria were selected by the order of their entry into the ICU. According to the treatment protocol, blood parameters including daily sodium (sodium disorders were considered as disorders presenting serum sodium < 135 mEq/L or > 145 mEq/L), potassium, calcium, magnesium, and phosphate, as well as coagulation factors including PT, PTT, and INR twice a week, daily blood acidity and the level of consciousness of patients with Glasgow score and Apache II scoring at the time of admission were measured according to the relevant protocol and documented in the information form. The mean level of these markers was measured at the end of the first and second weeks, and all patients were followed up as long as they were hospitalized in the ICU. The outcome for each patient, whether death or recovery, was determined and recorded in the patient’s profile. The other characteristics of the patients analyzed were as follows: mean arterial blood pressure, mechanical ventilation time, and hospitalization period. 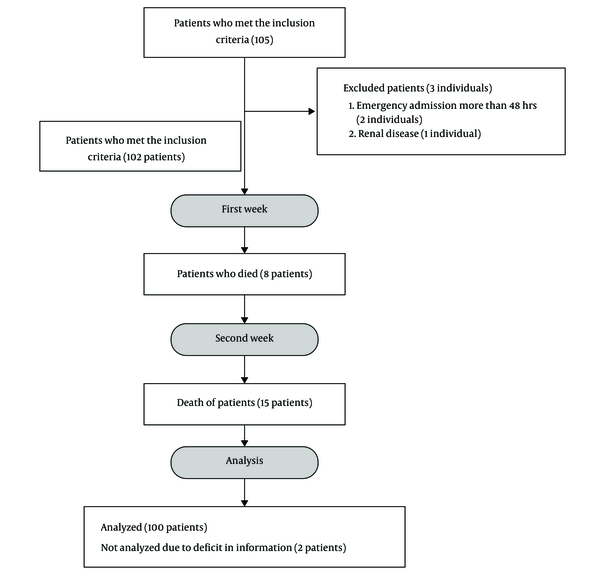 Patient information including demographic factors and paraclinical findings was recorded in a checklist made by the study conductor and entered into SPSS v.22 software. Statistical analyses were conducted using descriptive and analytical statistics. In the descriptive section, the mean and standard deviation of paraclinical findings were presented as the main variables in different groups (dead and recovered) and all demographic and clinical characteristics of patients were reported based on descriptive criteria. In the analytical section, based on the establishment of statistical presumptions, proportional parametric and nonparametric tests were used. Chi-square test was used to analyze the qualitative findings while to compare quantitative data, independent T-test and Mann-Whitney were used. To compare the changes in data in the first and second weeks, we used paired samples T-test. All of the tests were conducted at an error level of 5%.

Table 1. Demographic and Clinical Data from Both Groupsa

Table 2. The Paraclinical Data of Patients in Both Groupsa

The results of our study demonstrated that both hypernatremia and hyponatremia significantly increased mortality in TBI patients admitted to the ICU, but the total number of patients died from hypernatremia was significantly higher than that of hyponatremia. Despite the care that is being taken at special centers, electrolyte and acid-base disorders are usual. Generally, the cause of these disorders is the anaerobic metabolism caused by tissue hypo-perfusion, and usually, the cause of this hypo-perfusion is a process called “autonomic storm”, the activation of the autonomic system; On the other hand, changes that occur in the brain can lead to disorders such as diabetes insipidus, which ultimately leads to high urinary volume and reduced intravascular volume (9).

In a study conducted by Amini et al. (10), it was demonstrated that out of 150 TBI patients, 34 individuals suffered from sodium deficiency. Hypernatremia was seen in 22 patients (19 males and 3 females) with mortality of 81.8% (18 individuals). There was a significant difference in the mortality due to hypernatremia (P < 0.001). In patients with hyponatremia, nine patients (all male) developed the syndrome of inappropriate antidiuretic hormone secretion, and three patients developed cerebral salt wasting. Three patients died. In this study, a significant relationship was seen between mortality and hypernatremia. The results of the study are in line with our findings. In a study by Waikar et al. (11), the investigators reported that even mild hyponatremia was independently associated with a higher risk of mortality in hospital and after a long period after discharge.

According to the results of this study, the prevalence of mortality is high in ICU patients who have sodium disorders. In case of improper treatment, these disorders might increase mortality remarkably. Mortality of hypernatremia is significantly higher than that of hyponatremia. Therefore, physicians need to consider carefully the risk factors, patients at risk, symptoms, prevention strategies, and treatment of these two disorders, especially hypernatremia. The limitation of this study was the small sample size and the fact that we followed patients with TBI for only two weeks; however, the findings seem particularly robust in spite of these limitations. In addition, we suggest altering the study design and further investigation.

This research is based on a professional medical doctoral thesis conducted under the spiritual and financial support of the research deputy of Isfahan University of Medical Sciences. In this way, we appreciate the efforts of these dear individuals.