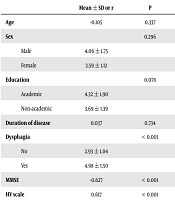 Drooling or Sialorrhoea is considered as a common non-motor symptom in patients with Parkinson’s disease (PD), however the mechanism of drooling in PD is unknown.

The aim of this study was to evaluate the impacts of dysphagia and cognitive function on drooling in PD.

Eighty-five patients with PD participated in this cross-sectional study. After diagnosis of PD, its severity was determined by the Hoehn and Yahr (HY) scale, which is consisted of five stages and explains the progression symptoms of PD. Evaluation of drooling was done by the Drooling Severity and Frequency scale (DSFS). Dysphagia was diagnosed using the Persian version of Northwestern dysphagia patient check sheet (NDPCS) and cognitive function was assessed through the Persian version of Mini-Mental State examination (MMSE). Data analysis was done with SPSS 22. All analyses were two-tailed tests and a P value of less than 0.05 was considered as statistically significant.

The mean total DSFS score was 3.96 ± 1.65, and using a cut-off point of two, the prevalence of drooling was 70.6% (n = 60) in PD patients. In adjusted analysis, the low MMSE score, high HY score, and dysphagia were all associated with drooling.

Although concurrence of dysphagia and drooling is possible in PD, we should also consider cognitive impairments as an important factor in the occurrence of drooling. In addition, further studies are needed to investigate the impact of cognitive domains on drooling in Parkinson’s patients.

Drooling or Sialorrhoea is considered as a common non-motor symptom in patients with PD (4).

Evaluation and management of drooling in PD patients is of great importance in the therapeutic and rehabilitation programs of these patients due to its bio-psychosocial complications. Inflammatory rash skin around the mouth (perioral dermatitis), saliva aspiration, the increased probability of pulmonary infection, speech disturbance, eating difficulties, and also the decreased quality of life in the patients and their caregivers are announced as complications of drooling (6).

Mild cognitive impairment is one of the most prevalent non-motor symptoms in PD, as it is experienced by approximately 20% - 50% of people with PD and in the advanced stages of the disease; more than 80% of patients more develop severe cognitive impairments and eventually dementia. Studies have shown that executive functions, attention, and recall tasks are the most damaging aspects of cognition (13).

Several studies have revealed that there is a relationship between dysphagia and cognitive impairment (14-18). For examples, Yang Jo et al. (17), in a study indicated that visual attention and executive function impairment may affect oral phase of swallowing in stroke patients. In addition, another study indicated that (18) executive function impairment in the elderly can affect their motor planning of swallowing (19).

Therefore, according to these studies, the purpose of the present study was to determine the effects of cognitive impairment and swallowing disorders on drooling in PD patients.

Eighty-five patients with PD participated in this cross-sectional study. Patients were selected from the neurology wards of Tehran University hospitals, between August 2014 and September 2015. Inclusion criteria included the age between 50 and 65 years old, clinical diagnosis of PD confirmed by a neurologist and diagnosis based on the United Kingdom Parkinson’s Disease Society Brain Bank (UKPDSBB) clinical diagnostic criteria (20), no history of other neurological diseases, no hearing or visual impairments, no use of antipsychotic drugs, use of levodopa as the main drug, and patients in the “on” state. All participants in this study were with distinct diurnal drooling complaints. All assessments were administrated for patients between 9 AM and 16 PM.

After diagnosis of PD, its severity was determinate by the Modified Hoehn and Yahr (H and Y) scale. This scale consists of five stages and explains the progression symptoms of PD. In this scale, stage 1, unilateral involvement only and 1/5: unilateral and axial involvement; stage 2, bilateral involvement without impairment of balance and 2.5: mild bilateral disease with recovery on pull test; stage 3, mild to moderate bilateral disease; some postural instability; physically independent; stage 4, severe disability, still able to walk or stand unassisted; and stage 5, wheelchair bound or bedridden unless aided. Based on our observation of the patient’s condition, the severity and progression of the disease were determined by the H and Y scale.

Evaluation of drooling was done by the Drooling Severity and Frequency scale (DSFS) (21), which is a subjective tool for assessment of drooling in PD and evaluates severity (1 - 5 scores) and frequency (1 - 4 scores) of drooling. Score one indicates dry (never drools), and scores five and four represent profuse and constant drooling. Determination of severity and frequency of the drooling is based on questions from patients.

Dysphagia was diagnosed using the Persian version of Northwestern dysphagia patient check sheet (NDPCS) (22). The NDPCS consists of twenty-eight components divided into five sections. Medical history, behavioral variables, gross motor function, oral motor test, and observations during trial swallow. This test has a dichotomy scoring system (yes and no). The three sections were based on observation and questioning of the patient and were scored based on the observation of the symptom. For assessment of the Oromotor section we observed oral, pharyngeal, laryngeal structure, and function. The last section includes observation of any signs of dysphagia during trial swallows with types of different food consistency (solid, semi-solid and liquid). The total score for patients is calculated from the total number of yes or abnormal items. Based on the score obtained by each patient are diagnosed four main symptoms of dysphagia (aspiration, oral phase disorders, delay of the pharyngeal phase, and pharyngeal phase disorders).

Cognitive function was assessed by the Persian version of the mini mental state examination (MMSE) (23), the total score of (MMSE) was 30 and cutoff score was 23.

This study was approved by the Ethics Committee of Tehran University of Medical Sciences and all patients completed the informed consent form.

Northwestern Dysphagia Patient Check Sheet (NDPCS): NDPCS is a scale for assessment of dysphagia. This test consists of five parts and 28 items with a dichotomous scoring system (normal or safe and abnormal or unsafe). In this study, we used the Persian version of NDPCS, which has shown with appropriate validity and reliability.

Mini-Mental State Examination (MMSE): The MMSE or Folstein test is a method that is used for grading the cognitive state of patients in the clinical and research studies. The questionnaire consists of 20 questions and a total score of 30 points, in which a score of less than 23 indicates the probability of cognitive impairment.

In this study, continuous variables were presented as mean ± standard deviation (SD) and categorical variables were presented as number (percentage). In the bivariate analysis, the relationships between demographic/clinical characteristics and the DSFS scores were examined via Pearson’s correlation coefficient and independent t-test. In multivariate analysis, to identify the factor associated with drooling in patients with PD, multiple regression models were used. Data analysis was done with IBM SPSS Statistics for Windows, Version 22.0 (IBM Crop., Armonk, NY, USA). All analyses were two-tailed tests and a P value of less than 0.05 was considered as statistically significant.

Table 1 outlines the demographic and clinical characteristics of the 85 patients with PD (68 men and 17 women). The mean age and disease duration of the patients were 59.40 ± 4.79 and 5.81 ± 3.68 years, respectively. Half of the patients had dysphagia and 56.5% were university-educated.

Table 1. Demographic and Clinical Characteristics of the Patients (N = 85)a

Previous studies on drooling have reported a direct correlation between the severity of dysphagia and the severity of drooling (4, 5, 11). However, in their studies it has demonstrated that there is no relationship between dysphagia and drooling, thus, more than one-third of patients with symptoms of dysphagia had no symptoms of drooling (24). Such discrepancy between the findings of different studies can be due to the used methods for evaluation of swallowing disorder and the number and type of samples. In some studies, only patients with severe symptoms of drooling were included, however, in other studies, cases with moderate to severe symptoms were studied (5, 11, 25).

Cognitive impairment, as one of the non-motor symptoms, is a common complication in PD and also attention and frontal-executive functions compared to other cognitive domains are more involved in PD (14, 26). Impairments affected some aspects of cognitive function are caused due to brain damages, which affect the oral phase of swallowing (17). Swallowing consists of four phases: preparatory oral stage, transit oral phase, pharyngeal phase, and esophageal phase. The first two stages are voluntary and the other two phases are involuntary. Drooling is known as a symptom of impaired oral phase. Cognition also affects voluntary activities more than involuntary and reflexive activities and any impairment in cognition causes damage to the voluntary aspects of an activity, such as swallowing (26-28).

The management of drooling in PD is important due to its medical and psychosocial complaints for patients and their families. However, like other disorders, knowledge of pathophysiology helps clinicians understand, apply, and develop appropriate treatment plans in their practice. Unfortunately, the precise etiology and pathophysiology of drooling in PD have not fully understood. Many studies have suggested some factors that potentially contribute in drooling in PD, these factors includes, unintentional mouth opening and a flexed head posture (5, 29) increased salivary flow rate (30), and dopamine deficiency (4).

Accordingly, the findings of this study cognitive impairments and dysphagia can relate to drooling in PD. Dysphagia causes drooling due to reduced ability to clear saliva from the mouth (31). The main cause of dysphagia in PD is bradykinesia, which results in reduced tongue and lip control, difficulty with mastication (10). As the findings of this study have been indicated in other studies, the severity of dysphagia is related to the severity of drooling in PD (11, 32). However, the relation between cognitive impairment and drooling is still not fully understood. Rana et al. (27), in their study, found that drooling is related to dementia in Parkinson’s Disease. Given that cognition encompasses several aspects, (attention, memory and working memory, problem solving and decision making etc.) it is unclear, which aspect of cognition relates to drooling. Kalf et al. (21), in their study indicated that severity of drooling has increased when a person engaged in a concurrent distracting activity, also Reynolds et al. (33), demonstrated that divided attention effects on frequency of saliva swallows and drooling. Further studies are needed to precisely determine the role of cognitive domains in saliva control.

Our data suggested that the cause of drooling in PD is multifactorial and for management of drooling in PD, we should consider all factors such as swallowing problems, cognition impairment and oral motor dysfunction. Also further studies are needed to investigate the impact of cognitive domains on drooling in Parkinson’s patients.

The authors are thankful to the patients with PD, their family members for their participation in this study, and also the staff of the Neurology Wards of Tehran University of Medical Sciences, Tehran, Iran for their cooperation.