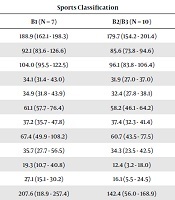 To investigate postural stability and its relationship with anthropometric measurements, body composition, and experience in judokas with visual impairment.

Seventeen judokas (70.6% men) with visual impairment participated in this cross-sectional study. The athletes were grouped based on the functional classification of partial (B2/B3, n = 10) and total visual impairment (B1, n = 7). Postural stability was assessed using the elliptical area of the 95% confidence interval (Area) and the average displacement velocity (Vavg) while remaining in a bipedal stance with eyes closed and blindfolded. Body mass, height, circumferences, skinfold thickness and diameters were measured and used to estimate body composition. Between-group comparisons were evaluated using the Mann-Whitney test. Bivariate correlations were determined with Spearman’s correlation coefficient with bootstrap analysis and 95% confidence interval (95% CI) from 500 resamplings.

No significant difference was observed between the B1 and B2/B3 groups in relation to postural stability (Area; P = 1.00; Vavg; P = 0.85). Postural stability (Area but not Vavg) correlated positively and moderately (P < 0.05) with anthropometric measurements and negatively with judo experience (practice time).

The postural stability of judokas was unrelated to the degree of visual impairment. Postural instability was correlated with anthropometric measurements, mainly body fat and height, and judo experience.

Postural stability is important when performing activities of daily living. However, it is quite mandatory when practicing high-performance sports. In particular, judokas try to knock down their opponents within the competition Area (1) using strategies that provoke the displacement of opponents’ center of body mass (CoM) while maintaining their stability (2). To achieve this high performance, a judoka’s training promotes the development of tactics that stimulate the integration (3) of sensory i.e., c-visual, somatosensory, vestibular and muscular information to respond to changes in the base of support and its relationship with the judoka’s CoM, such as during an attack-defense situation. In addition, judokas also perform actions using an enlarged base of support, which makes it more difficult to displace their CoM (2). From the biomechanical point of view, postural control is achieved by adjusting the position of the CoM, i.e., the net location of the center of the mass of the body; the CoM is redirected by the displacement of the body’s center of pressure (CoP), i.e., the location of the ground reaction forces generated by the muscles in response to the sensory input and its integration (4). Postural instability can be related to the total or partial impairment of one or more of these sensory systems; visual impairment is particularly compromising in this regard given its dominant association with body displacement stabilization (5-7).

Postural stability was evaluated using a force platform (AccuSwayPLUS, AMTI, USA) under a standard protocol at a sample rate of 100 Hz and task duration of 35 s (the first 5 s of each attempt was discarded from the analysis) (15, 16). The participants were asked to remain standing on the platform with arms relaxed, head in a natural position, and their feet together at the midline of their bodies. The task was performed with eyes closed and blindfolded. This task was repeated three times, with a 2-minute interval. The recorded center of pressure (CoP) signal was filtered (second-order Butterworth low-pass filter with a cutoff frequency of 2.5 Hz, applied in the direct and reverse directions) to remove noisy high-frequency components that were unrelated to the body sway (17). The area of the ellipse for the 95% confidence interval (Area; mm2) and the average displacement velocity (Vavg; mm/s) were analyzed (18); to increase the reliability of the test (19), the average values across the three repetitions were considered for analysis.

Descriptive analysis involved the calculation of median values (minimum-maximum) or absolute and relative frequencies. Between-group comparisons were performed using the Mann-Whitney U test. Bivariate correlation analysis was determined based on Spearman’s correlation coefficient (ρ). The 95% confidence interval (95% CI) for ρ was obtained by the bootstrap method after 500 resamplings. Coefficients between 0.4 and 0.6 were considered “moderate” correlations, and those above 0.7 were considered “strong” correlations (20). Statistical analysis was performed in SPSS V. 20.0 (Armonk, NY: International Business Machines Corporation) (α = 5%).

Table 1. Anthropometry and Body Composition of the Studied Samplea

aValues are expressed as median (range).

bComparisons between the groups B1 vs. B2/B3, with Mann-Whitney’s U Test.

We observed moderate and significant correlations between Area and body mass; height; arm span; circumferences of the thigh, leg, abdomen and hips; ∑9SF, and body fat mass, as well as the judo experience time [ρ = -0.548 (-0.831 - -0.144); p = 0.023]. No anthropometric variable or body composition-related variable was found to be correlated with Vavg (Table 2).

Table 2. Correlations Between Anthropometric Variables, Body Composition and Postural Displacement in the Participants of the Study (N = 17)

In competitive sports, athlete anthropometric measurements have a direct influence on the development of techniques, athletic movements, and modality-specific motor abilities (1), thereby affecting performance. Inverse associations between body fat and performance have been described by Katralli and Goudar (1); judokas without visual impairment and high body fat percentages performed fewer launches using the ippon-seoi-nage -a hand-throwing technique in which the opponent is picked up and thrown over the shoulder onto his/her back- within a specified period than those with low body fat percentages. Franchini et al. (22) found that Brazilian judokas with no visual impairment and a higher fat percentage also performed worse than those with a lower fat percentage on the Special Judo Fitness Test and the Cooper test. From these findings, we could expect that postural stability would be associated with larger anthropometric measurements (i.e. body measurements and body fat mass) in judokas.

Russo et al. (23) and Schmid et al. (8) suggest that visual impairment does not necessarily prompt athletes to postural instability. Chiari et al. (9) showed in subjects with preserved vision that anthropometric measurements (e.g., body mass and height) were related to postural stability. Investigating judokas with visual impairment, the present study showed that both anthropometric measurements and body composition correlate positively with the CoP displacement area but not with the CoP velocity. Whereas both CoP position and velocity are informative about the whole body’s stability (greater CoP displacements and speeds are associated with greater bodily movements (24)), there is still a debate on which information best represents postural stability (25), and further studies are required in this subject.

In terms of the results found in this study, the relationship between the participants’ anthropometric measurements and their postural stability can be understood as an effect of body mass distribution at the level of neuromuscular activity needed to counteract the effects of gravity on the body. Specifically, considering the classic model of the inverted pendulum (26), one can suppose that the greater the body mass, the greater the muscle torque that is needed to counteract its movement. This muscle torque, in turn, is reflected in the greater displacement of the CoP, which is proportional to the level of neuromuscular activation (27) and the acceleration of the center of mass (28). This hypothesis is partially corroborated by previous findings (29) that showed a positive relationship between body fat mass (body mass index > 30 kg/m2) and higher CoP displacement area. The observed increases in postural displacement may be due to greater variability in motor control in those individuals with greater anthropometric measurements, as suggested by the biomechanical model (30). Therefore, we suggest that the postural displacements observed in judokas with visual impairment result from the combination of adaptive postural stability strategies (23) and the characteristics of their body mass distributions (9).

Usually, higher postural displacements are related to lower body stability and greater risk of fall (31). In addition, in athlete populations, changes in postural control are considered risk factors for musculoskeletal injuries (32). Thus, one can argue that athletes with greater body size and fat mass have, at the same time, a higher risk of falling and a higher risk of injury than those with lower body mass. In this case, further research is necessary to investigate whether the incorporation of balance training in this subpopulation of athletes can prevent musculoskeletal injuries in this population.

One limitation of the study is its sample size. However, taking into consideration the proportion of people with visual impairment who practice judo in the city of Rio de Janeiro, Brazil, and who met the inclusion and exclusion criteria established for participation in the study, we believe that we have evaluated a representative sample of this population. Nonetheless, larger studies are required to confirm the findings reported here. Additionally, this study did not include a comparison group of judokas without impairment, which would have allowed us to evaluate the impact of visual impairment on postural stability. Notwithstanding, our results are important for the conceptualization and execution of future analyses that might contribute to planning exercise training for and tracking athletes with visual impairment.