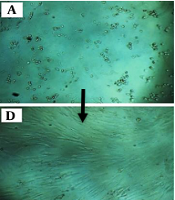 Evaluation of the Synergistic Effects of Ciprofloxacin and Low-Power Laser on Apoptosis, Cell Viability, and Reactive Oxygen Species Levels in Skin Cancer (A375 Cancer Cells)

Skin cancer is one of the most common diseases. Ciprofloxacin creates free radicals and causes DNA damage, and due to the chromophore nature of this drug, the production of free radicals increases. Low-power laser (LPL) is the inhibition of red and near-infrared light to tissues to repair injuries and lesions created to heal wounds and connective tissue and treat acute and chronic pain.

The aim of this research was to investigate the synergistic effects of ciprofloxacin and LPL on apoptosis, cell viability, and reactive oxygen species (ROS) levels in skin cancer (A375 cancer cell lines).

The viability rate of A375 cancer cell lines treated with ciprofloxacin and LPL was evaluated by microscopic and MTT methods, and then flow cytometry was used to evaluate their effects on apoptosis and ROS levels. Statistical analysis was done using one-way ANOVA.

Treatment of cancer cells with ciprofloxacin (100 μg/mL) and LPL for 30 seconds could prevent the process of cancer cell proliferation after 48 and 72 hours. Also, the combination of these two methods increased the rate of cellular apoptosis by 5% and reduced ROS levels by 0.1%.

Because the combination of ciprofloxacin and LPL therapy can stop the proliferation of cancer cells, especially skin cancer cells thus, the use of this treatment can be used to treat cancer in the future.

Skin cancer is one of the most common cancers and affects men more than women (1). Studies have shown that skin cancer is the most common type of cancer in the Middle East (2). The origin of skin tumors can be basal layer cells [basal cell carcinoma (BCC)], squamous cells [squamous cell carcinoma (SCC)], melanocyte cells (malignant melanoma), immune cells (lymphoma, etc.), skin appendages, etc. (3). The incidence of skin cancers has increased in recent years (4). According to studies in the Netherlands and the United Kingdom, this could be due to increased daily outdoor activities without adequate clothing, increased seaside travel, prolonged sun exposure, and ozone depletion (5). Sensitivity of the skin to light is one of the side effects of some drugs. This is due to the ability of drugs or their metabolites to absorb energy from sunlight (6) and can significantly increase the risk of non-melanoma skin cancer (NMSC). Optical sensitivity can be achieved through an exciting chromophore (optical sensitivity type I) and/or the formation of single oxygen (type II) (7). Light-sensitive activated oxygen species can damage nucleic acids and their precursors and the membrane’s proteins and lipids (8). Fluoroquinolone antibiotics have been identified as a light sensitizer with a wide range of adverse skin reactions (9). They have photo-carcinogenic effects in mice (10) and increase the risk of pre-malignant skin lesions in patients (11). Fluoroquinolone is structurally based on nalidixic acid, which has been replaced by fluorine C6. Fluoroquinolones inhibit DNA gyrase and topoisomerase IV enzymes, which are essential for bacterial proliferation (12). They are also ultraviolet (UV) chromophores with absorption peaks at 280 - 315 nm (UVB) and 315 - 400 nm (UVA). These drugs can form cyclobutane thymine dimers (T<>T CPDs) to break DNA strands and the oxidized bases by both type I and II reactions (13, 14). Ciprofloxacin is the most common fluoroquinolone and is more associated with skin side effects than other fluoroquinolones (8). Since the advent of the first lasers, their use in medicine has expanded dramatically (15). By careful selection of parameters, lasers can be used to target tumor components. Low-power laser (LPL) can be an alternative treatment option that minimizes the side effects of current treatments used to treat NMSC (16).

The aim of this study was to investigate the effect of ciprofloxacin and LPL on apoptosis, cell viability, and reactive oxygen species (ROS) Levels in the A375 cell lines.

The A375 cancer cells were purchased from the Cell Bank of the Iranian Biological Resource Centre, Tehran, Iran. The cells were cultured in 25 mL plastic flasks containing DMEM (DENAzist Asia, Iran), FBS 10% (DENAzist Asia, Iran), and 10µg/mL penicillin-streptomycin solution. The cells were incubated in a CO2 incubator (MEMMERT, IN55) at 37°C with 5% CO2 and humidity of 80%. The culture medium was replaced with fresh medium three times a week. Cell counting was performed using a hemocytometer (HGB, Germany).

MTT assay was used to measure the percentage of cell viability (17). Briefly, 3 × 104 cells were cultured in a 96-well plate and incubated overnight at 37°C with 5% CO2 and humidity of 80%. Then, the cells were treated with different concentrations of ciprofloxacin (5, 25, 50, 75, and 100 μg/mL) for 24, 48, and 72 hours. The test group was irradiated with LPL (2 J/cm-2) for 30 s. The negative control cells were not treated with laser beams and ciprofloxacin, but the positive control cells were only treated with ciprofloxacin. Then, 5 µl of MTT stock solution (5 mg/mL) was added to each well and incubated for 1 h at 37°C. When the purple colored precipitates were observed under an inverted microscope (ZEISS, Germany), the media was carefully removed, and 100 µL of dimethyl sulfoxide (DMSO) was added to each well, and the plate was incubated at room temperature for 2 h. Finally, the absorbance was measured at 570 nm using a microplate reader (Bio-Rad, USA). The assay was repeated in triplicate for each concentration, and the cell viability was determined using the following formula:

The levels of ROS in the treated cells were measured by the flow cytometry method. Accordingly, 1 × 106 cells were cultured in 6-well plates, and then the cells were treated with ciprofloxacin (5, 25, 50, 75, and 100 μg/mL) for 24, 48, and 72 hours, followed by irradiating with LPL at 660 nm for 30 s. The cells were removed from the plate and incubated with 2 mM of DCFH2-DA for 45 min in the dark place. Then, the cells were washed with PBS and transferred to a flow cytometer for measuring the ROS levels. The data were analyzed by FlowJo (7.6.1) software (18).

3.5. Evaluation of Apoptosis by Flow Cytometry

To detect the apoptotic cells, the FITC Annexing V Apoptosis Detection Kit (BD Pharming™, 556547) was used. The A375 cells were subjected to photodynamic therapy (PDT) and washed twice with 200 μL of PBS and detached from the plastic flasks using trypsin-EDTA solution (Gibco Invitrogen, USA). Then, 1 × 106 cells/mL were resuspended in 200 μL binding buffer (1x), and 5 μL of FITC Annexing V and 5 μL of propidium iodide (PI) were added to the cell suspension. Stained cell samples were incubated for 10 min at room temperature, and 200μL of binding buffer (1x) was again added to cell suspension prior to analysis with a flow cytometer. The data were analyzed by FlowJo (7.6.1) software (19).

All tests were performed in triplicate, and the results were reported as mean ± SD. The obtained data were analyzed using GraphPad Prism V. 8 (La Jolla, CA, USA) and SPSS 26 software by two-way analysis of variance (ANOVA). A P < 0.05 was considered significant.

According to Figure 1, the cell proliferation rate was evaluated at 24, 48, and 72 hours. The cell proliferation in the cells treated with ciprofloxacin and LPL showed a significant decrease compared to other groups (B, E, and H). Groups 1 [ciprofloxacin (1 mg/mL) for 72 hours] (Figure 1A, D and G) and 3 (Figure 1C, F and I) showed the same results. These results indicated the positive effect of concomitant use of ciprofloxacin and LPL to reduce the number of cancer cells. 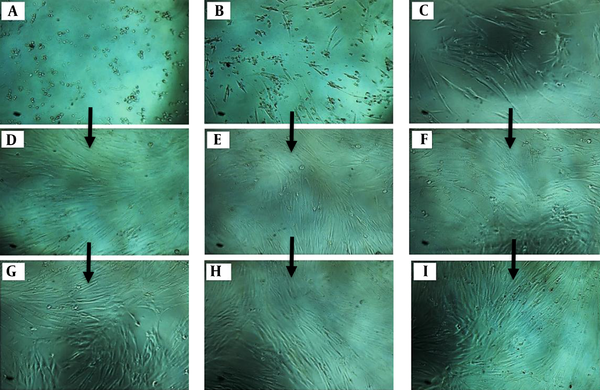 According to Figure 2, over time (24 and 72 hours after treatment), the percentage of cell viability decreased significantly in all groups. The results also showed that compared to the negative control group at 24, 48, and 72 hours, the percentage of cells viability after treatment with ciprofloxacin (5 to 100 μg/mL) and LPL significantly decreased (P < 0.001). This reduction was most noticeable at 72 hours caused by the synergistic effect of LPL and ciprofloxacin. 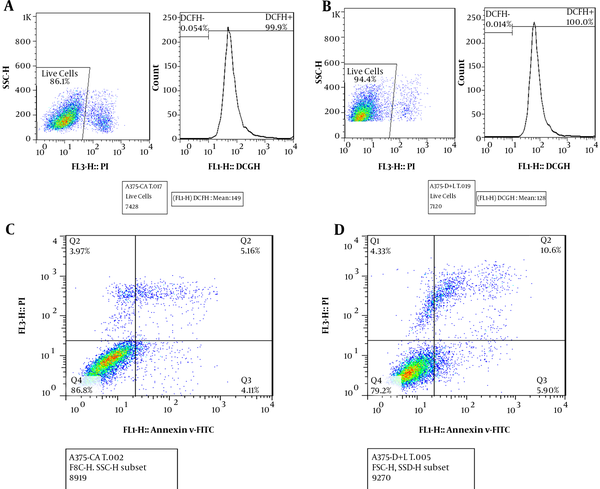 4.4. Evaluation of Apoptosis by Flow Cytometry

The results of flow cytometry showed that the number of apoptotic cells treated with ciprofloxacin and LPL increased by about 5% compared to A375 cells treated only with ciprofloxacin, which is consistent with other studies. For example, Wu et al. (2007) showed that LPL irradiation of human lung adenocarcinoma cells induced apoptosis in these cells and also changed the mitochondrial membrane potential, and activated the caspase-3 enzyme (25). Tian et al. studied the effect of LPL on apoptosis in human colorectal cancer (HT29) cells. They demonstrated that LPL inhibited cell migration and induced apoptosis in these cells (26).

Due to an increase in the prevalence of different types of cancers, the need for new therapies is more than ever needed. The combination of LPL with other classes of antibiotics can be an effective way to offer new therapies in the treatment of various cancers.

We appreciate all professors who participated voluntarily in this investigation.

Copyright © 2021, Gene, Cell and Tissue. This is an open-access article distributed under the terms of the Creative Commons Attribution-NonCommercial 4.0 International License (http://creativecommons.org/licenses/by-nc/4.0/) which permits copy and redistribute the material just in noncommercial usages, provided the original work is properly cited.
download pdf 5.92 MB Get Permission (article level) Import into EndNote Import into BibTex
Number of Comments: 0