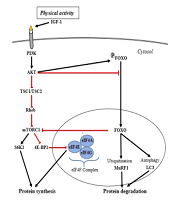 Muscle loss occurs in some conditions such as aging, sarcopenia, and cancer. The interaction between protein synthesis and degradation signaling components induced by high-intensity interval training (HIIT) is not well studied.

The purpose of the present study was to simultaneously examine the effect of eight-week HIIT on the gene expression of both signaling components.

Sixteen male Wistar rats were randomly assigned to HIIT and non-exercise control groups. The HIIT group ran on a treadmill, five days/week for eight weeks, with 0º slope, including five interval sets of high and low intensity. Forty-eight hours after the last exercise session, dissected soleus muscles were stored at -80°C for later analyses.

The gene expression of Akt1, mTORC1, and S6K1 were increased in the HIIT group compared with the control group (All P ≤ 0.031) concomitant with the suppression of eIF4EBP1. The results of the S6K1 and eIF4EBP1 mRNA were also confirmed by the Western blotting. According to the inhibitory effect of Akt1, the gene expressions of FoxO3a and, consequently, MuRF1 and LC3A were significantly inhibited (All P ≤ 0.003). Western blot analysis did not confirm the LC3A protein expression, which may underline the role of LC3A in autophagy to promote cell survival.

The intensities and durations of the exercise training protocol are sufficient to increase protein synthesis signaling components and especially inhibit the atrophy-related gene expression, which may lead to attenuating muscle loss and increasing muscle mass. Accordingly, it may be considered for rehabilitation and/or prevention of some conditions such as sarcopenia and cachexia.

The percentage of the aging population is rising, and it is estimated that 80 million individuals will be over the age of 65 years by the year 2050. Sarcopenia, termed age-related skeletal muscle loss, which is a geriatric syndrome and public health issue that will spread between 10 to 20% and along with cachexia, muscle loss related to disease and immobility, may lead to disability, poor quality of life, and mortality. Skeletal muscle mass is controlled by the balance between muscle protein synthesis, termed “hypertrophy” and protein degradation, termed “atrophy”. As shown in Figure 1, IGF-1/PI3K/Akt signaling pathway regulates protein synthesis and muscle growth. IGF-1 activates the Akt through the activation of PI3K, and consequently, mTORC1 is activated by Akt to play a crucial role in protein synthesis and skeletal muscle growth by phosphorylating and activating the S6K1 (1, 2). In addition, mTORC1 phosphorylates and suppresses the activity of eIF4EBP1; otherwise, non-phosphorylated eIF4EBP1 inhibits the formation of the eIF4F complex (eIF4E, eIF4A, and eIF4G) by binding to the eIF4E (3). Furthermore, skeletal muscle protein degradation is controlled by two proteolytic systems, ubiquitin-proteasome, and autophagy-lysosomal pathways. FoxO transcription factors regulate both pathways by inducing two critical atrophy-related E3 ligases, MuRF1 and MAFbx, and also several autophagy-related genes, including MAP1LC3 (4). Activation of both systems, e.g., in some conditions such as cancer and heart failure, leads to protein degradation and skeletal muscle loss (5). 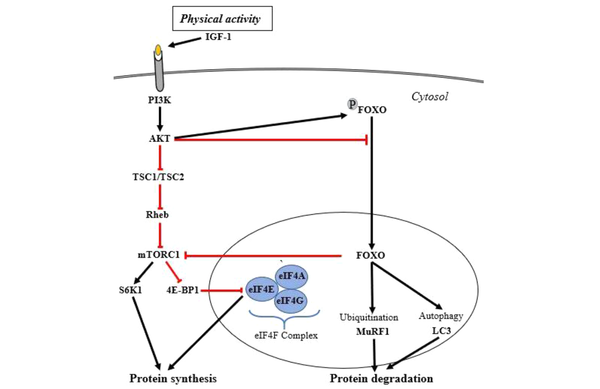 Given that exercise training has beneficial effects on the prevention and/or improvement of some diseases such as obesity, hypertension, cachexia, and sarcopenia (6), the exercise training-induced alteration of gene expressions related to skeletal muscle protein synthesis and degradation signaling components have less been studied, especially simultaneously. Recently, a study investigated the effects of six-week high-intensity interval training (HIIT) on muscle atrophy-related genes and concluded HIIT may improve muscle atrophy (7). In addition, the effect of HIIT on both signaling components was recently examined in a study in which the exercise protocol was designed according to the studies of patients with heart failure (8). HIIT has been known as an effective modality for improving muscle size (9). Considering the lack of information, particularly gene mRNAs related to ubiquitin-proteasome and autophagy-lysosome system, simultaneously comparison the alteration and interaction of both protein synthesis and degradation signaling components may reveal the potential therapeutic target and/or help to design a more effective exercise training program for the prevention and/or rehabilitation of related diseases.

The purpose of the present study was to investigate the alterations of Akt1, mTORC1, S6K1, eIF4EBP1, FoxO3a, MuRF1, MAP1LC3A (Hereafter referred to as LC3A) gene expression induced by HIIT. In addition, the protein expressions of S6K1, eIF4EBP1, and LC3A were evaluated by Western blotting for further confirmation of the mRNA results.

All research protocols were performed in accordance with the declaration of Helsinki 1975. Sixteen male Wistar rats, 8-month-old, were randomly divided into two groups, including HIIT (217.38 ± 10.88 gm) and control (219.86 ± 13.79 gm). They were kept, 4 rats per cage, in a light-dark 12 h cycle, 22 - 24°C temperature, 60 ± 5% humidity, with free access to standard rat chow and water. Two-week familiarization and adaptation to the main exercise protocol, at a gradual increase in running time and speed, was conducted. To determine exercise intensity, the maximal oxygen uptake (VO2max) test was performed as previously described and was repeated once every two weeks throughout the study (10, 11). Briefly, after 20 min warm-up at 50 - 60% VO2max, the velocity of the treadmill was increased by 0.03 m/s every two min until the rat was not able to run further.

Eight-week of HIIT, five days per week, included five interval sets of high (85 - 90% VO2max) and low intensity (50 - 60% VO2max). The running time for high-intensity running on the treadmill with 0° slope was 4 min in the 1st week, 6 min in the 2nd week, and 8 min from 3rd to 8th week, whereas low-intensity running time was considered two min throughout the intervention. Each exercise session consisted of five min warm-up and cool-down at 50 - 60% VO2max (11, 12). An identical condition was considered for the control group except exercise training. Due to the death, the final number of seven rats remained in the control group. Forty-eight hours after the last exercise session, the soleus muscle was dissected from the hindlimb of each anesthetized rat and stored at -80°C for qRT-PCR and Western blot analyses.

Quantitative real-time polymerase chain reaction (qRT-PCR) was used to assess the gene expression levels. Then 40 - 50 mg of soleus muscle was homogenized, and according to the manufacturer’s instruction (QIAGEN, Germany), total RNA was isolated using TRizol reagent (Qiazol, (cat. no. 79306, USA). RNA purity and concentration were determined spectrophotometrically by NanoDrop 2000 (Thermo Scientific, Rockford, USA), and RNA integrity was checked electrophoretically by 1% agarose gel stained with Nancy-520 (Sigma-Aldrich, Sao Paulo, SP, Brazil). Then cDNA was synthesized using a cDNA synthesis kit (Fermentas, Glen Burnie, MD, USA), and mRNA levels of the target genes and reference gene (GAPDH) were assessed separately by qRT-PCR. Forty cycles were considered for each RT-PCR cycle at the temperatures of 94°C maintained for 20s, 58 - 60°C for 30s, and 72°C for 30s. Melting point dissociation curves were used to confirm the purity of the amplification products (13). The sequences of the gene’s primer are shown in Table 1.

Table 1. The Primer Sequences of Genes

Homogenized soleus muscles in RIPA buffer (Cytomatingene) with a protease inhibitor cocktail (Sigma) were centrifuged at 15,000 rpm for 10 min at 4°C. Through collected supernatant, protein content was assessed by the Lowry method. Then, proteins were separated by polyacrylamide gel electrophoresis (Bio-Rad) via 4 - 20% gradient polyacrylamide gels containing 0.1% sodium dodecyl sulfate for ~2 h at 95 V and were transferred to PVDF membranes (Roth) for 80 min at 80 V (Bio-Rad). Nonspecific sites were blocked overnight at 4°C in TBS containing Tween and 5% nonfat milk (sigma). Membranes were then incubated for 2h with primary antibodies directed against the proteins of interest at room temperature. The protein abundance of S6K1, eIF4EBP1, LC3A, and GAPDH (Served as a loading control to normalize protein loading and transfer) were determined in muscle samples. Following incubation with primary antibodies, membranes were washed extensively with PBS-Tween and then incubated with secondary antibodies 1h at room temperature. Then, membranes were developed using DAB, and related images were captured and analyzed using the Image J software (14).

The results are expressed as mean ± standard error of the mean (SEM). Independent student t-test and Mann-Whitney U test were used to evaluate between-group differences. Statistical significance was accepted at P < 0.05 using SPSS version 24.

In this experimental study, the alterations of gene expression involved in protein synthesis and degradation signaling pathways induced by eight-week HIIT were evaluated. 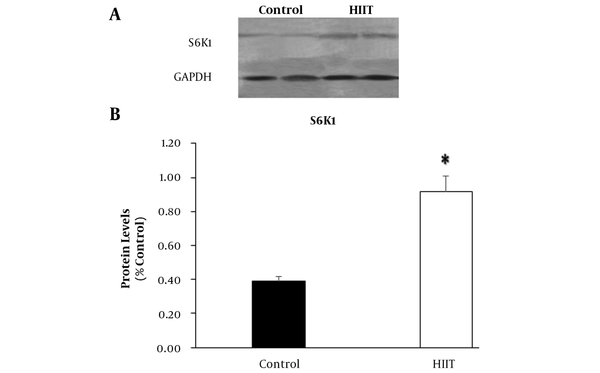 The protein expression of S6K1 and GAPDH in rats’ soleus muscle (A). The eight-week HIIT caused a significant increase of S6K1 protein levels in the HIIT group (n = 8). Data are expressed as mean ± SEM. * Indicates significant difference (P = 0.031) compared with the control group (n = 7). 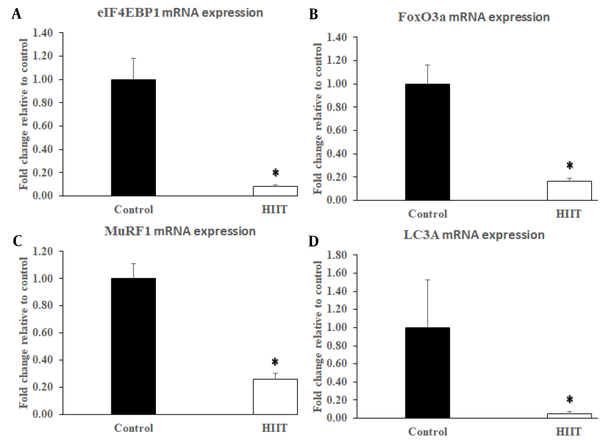 The present study simultaneously examines the alteration of gene expressions involved in protein synthesis and degradation signaling induced by HIIT.

The findings of the present study revealed that the intensity, percentage of VO2max, and duration of exertion of HIIT significantly impact the gene expression levels. The intensities and durations of the HIIT protocol were sufficient to increase the gene expression of protein synthesis signaling components and suppress the atrophy-related gene expressions, which can lead to attenuating muscle loss and increasing muscle mass. Accordingly, the HIIT protocol can be considered for some conditions such as sarcopenia and cachexia.

Copyright © 2021, Gene, Cell and Tissue. This is an open-access article distributed under the terms of the Creative Commons Attribution-NonCommercial 4.0 International License (http://creativecommons.org/licenses/by-nc/4.0/) which permits copy and redistribute the material just in noncommercial usages, provided the original work is properly cited.
download pdf 1.53 MB Get Permission (article level) Import into EndNote Import into BibTex
Number of Comments: 0