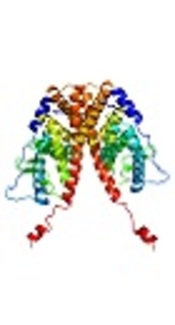 Uterine leiomyomas (ULs) are benign tumors in the uterus that their growth and progression are stimulated by the estrogen hormone. In the current study, we aimed to determine if estrogen receptor α (ERα) polymorphisms could be used as the markers of the susceptibility to UL.

The ERα gene polymorphisms of 154 UL women and 186 controls were genotyped by PCR or PCR-RFLP methods.

Uterine leiomyomas (ULs) are benign tumors that arise from uterine smooth muscle cells and diagnosed in about 30 - 40% of women during the reproductive age. Almost the cause of 17% of the hysterectomies in the U.S is UL (1).

Evidence shows that ULs are monoclonal and originate from somatic mutations in myometrial cells, causing the advanced lack of growth regulation (2). UL formation is multistep and multifactorial and growth factors, ovarian steroid hormones, and cytokines play key roles in its development (3, 4). The occurrence of several myomas establishes a genetic susceptibility for myoma development; but, the familial inheritance of UL has not been well considered (5). Although the incidence of these tumors is high, their exact pathophysiology and the proliferative pathway are not identified. Age, endogenous hormones, family history, African-American race, weight, a diet rich in red meat, and menopausal hormone therapy are various risk factors of UL (6).

The UL is an estrogen-dependent complication because it develops during the reproductive (hormonally active) years and regresses after menopause (7). In addition, UL grows during gestation, and the hypogonadal condition induced by gonadotropin-releasing hormone (GnRH) agonists often leads to a decrease in myomas (8).

Leiomyomas are estrogen-dependent and this steroid hormone triggers the progression of cell proliferation in the G1 phase of the cell cycle in various tissues including the uterus (9).

Physiological and pathological activities of estrogen are applied through an estrogen receptor (ER). There are two isoforms of estrogen receptors (ERα and ERβ) coded by two different genes. Both receptors are expressed in osteoblasts, osteoclasts, bone marrow, and uterus (10, 11). Since genetic alterations in these receptors can affect estrogen function, polymorphisms of these genes could be good candidates for disease in women (11).

ERα gene is located on a 6q25 chromosome and contains eight exons and seven introns (12). There are several polymorphisms in this gene that can affect the expression or its function. One of these polymorphisms is the displacement of T/C on the border of intron 1 and exon 2 that is detected by PvuII (rs2234693) restriction enzyme (11). Another polymorphism is the displacement of A/G near the PvuII polymorphism, which is detected by XbaI restriction enzyme. In silico analysis revealed that PvuII and XbaI polymorphisms could slightly distress the mRNA splicing’s of ERα although these substitutions cannot generate new cryptic splice acceptor or donor sites; thus, these genes polymorphisms have not intense modification on these mRNA splicing (13).

According to the role of genetics on UL susceptibility, several studies have evaluated the association between genetic polymorphisms in different genes and UL, the results of which are inconsistent (14-16). Given the high prevalence of UL and the possible role of estrogen and its receptors in the incidence of the disease, the present study was conducted to examine the possible association of ERαPvuII and XbaI polymorphisms with UL in an Iranian population.

This case-control study was conducted on 154 pre-menopause women undergoing myomectomy or hysterectomy and 186 BMI and age-matched healthy controls. Women who received hormonal drugs within the last year prior to the study were excluded. The UL women were selected using probability sampling method from among the patients of gynecologic clinics and their disease had been confirmed pathologically.

The healthy controls were also the premenopausal women selected from among the women referring for the routine check-up and the Pap smear test. The UL and control groups were matched according to age and ethnicity. The control group was examined by physical and ultra-sonographic evaluations to exclude the uterine leiomyoma. All women with systemic diseases and a history of malignancy were excluded from the study.

The protocol of the study was approved by the Ethics Committee of Zahedan University of Medical Sciences. All the women gave their informed consent before participating in the study.

A 1.3 Kb PCR product that comprised the PvuII and XbaI polymorphic sites was amplified using two oligonucleotide primers forward: 5’- CTGCCACCCTATCTGTATCTTTTCCTATTCTCC -3’ and reverse: 5’ - TCTTTCTCTGCCACCCTGGCGTCGATTATCTGA - 3’, as previously described (17). PCR was performed according to the following protocol: initial denaturation at 94°C for 3 minutes; 30 cycles of denaturation at 94°C for 62 seconds; annealing at 62°C for 60 seconds; and extension at 72°C for 90 seconds and a final extension at 72°C for 5 minutes. The PCR products were digested with the PvuII and XbaI restriction enzymes. The digested products were electrophoresed on 2% agarose gel stained with safe stain (Figures 1A and 1B).

The PCR-RFLP analysis results of A. PvuII T> C and b. XbaI A> G polymorphisms of ERα gene

Statistical analysis was performed using SPSS version 18.0 software. The Hardy-Weinberg equilibrium was evaluated by the chi-square test. Statistical differences between qualitative variables were determined using the chi-square test or Fisher Exact Test and quantitative variables using independent sample t-test. Different allele frequencies were calculated using the genotype of all samples. The comparison of allele frequencies and genotypes was made using the chi-square test. Linkage disequilibrium (LD) was analyzed using CubeX software (18). The logistic regression analysis was used to assay the independent effect of each risk polymorphism and haplotype on UL. A P-Value of less than 0.05 was considered significant.

Table 1 presents the clinical and demographic characteristics of the uterine leiomyoma women and controls. There was no significant difference according to maternal age and age of menarche between the UL and control groups. The bleeding and pain symptoms were more frequent in the UL women than in the controls.

Table 1. The Demographic and Clinical Characteristics of the UL Patients and Controls

Table 2. The Frequency of Alleles and Genotypes of ERαPvuII T> C and XbaI A> G Polymorphisms in the Uterine Leiomyoma Women and Controlsa

The frequency of four haplotypes of ERαPvuII and XbaI polymorphisms is shown in Table 3.

Table 3. Haplotypes Frequency of ERαPvuII T> C and XbaI A> G Polymorphisms in the Uterine Leiomyoma Women and Controls

Uterine leiomyoma is an estrogen-dependent neoplasm in women. Therefore, estrogen and ERs play key roles in the pathogenesis of this complication (19). Genetic and environmental factors could contribute to the development of UL. Several ERα polymorphisms can affect the function of the sex-steroid system. However, the mechanisms of these polymorphisms on diseases remain unclear (20). Although polymorphisms (unlike mutations) are not directly related to the diseases, they are valuable approaches in the investigation of multifactorial disorders. Polymorphisms that occur in the regulatory or structural regions could alter the expression levels of genes or function of proteins. It seems that the susceptibility genes interact with other genes and environmental factors to accelerate disease progression (21).

Al-Hendy and Salama observed an association between ESRα PP (CC) genotype in black and white women but not in Hispanic women. In addition, they found a higher frequency for the PP genotype in black women compared to white or Hispanic women, which might explain the increased occurrence of UL among black women (26). Govindan et al. (27) indicated an association between the C allele of PvuII polymorphism and endometriosis and UL in India.

In a meta-analysis of 11 studies by Feng et al. (28) in 2011, a significant association was observed between ERαPvuII, but not XbaI polymorphism, and a higher risk of uterine leiomyoma. Taghizade Mortezaee et al. (29) showed no correlation between ERαPvuII and XbaI polymorphisms and increased risk of leiomyoma in the west of Iran. In a recent study, Veronica et al. (30) indicated that ERβ -13950TC genotype and progesterone receptor +331GA and AA genotypes, as well as the corresponding hormonal levels, could be involved as biomarkers in the UL prediction.

There are some limitations to the current study such as the small sample size, which might affect the results, environmental conditions, and different ethnic groups living in the southeast of Iran. In addition, if it was possible to perform this study in both myomatous and intact tissues, the results would be more valuable.

Copyright © 2018, Gene, Cell and Tissue. This is an open-access article distributed under the terms of the Creative Commons Attribution-NonCommercial 4.0 International License (http://creativecommons.org/licenses/by-nc/4.0/) which permits copy and redistribute the material just in noncommercial usages, provided the original work is properly cited
download pdf 600.29 KB Abstract XML Get Permission (article level) Import into EndNote Import into BibTex
Number of Comments: 0