Sentinel lymph node biopsy is the standard method of evaluating and staging the axilla in the patients with early stage of the breast cancer. The aim of this study is to evaluate the axillary recurrence rate in patients with negative sentinel node biopsy.

From 2006 to 2010, all the patients with a negative sentinel lymph node in their pathologic results were introduced in the study. All patients were invited to the breast cancer clinic for the follow up examination. The axillary ultrasonography was performed to determine the recurrence.

Among 150 female patients with negative sentinel lymph node, 52 were entered into the study and were followed up. The mean age was 45.7 ± 8.58 years, and the mean primary tumor size was 2.36 × 2.40 cm. The primary tumor was located in the upper outer quadrant (90.4%) and the mean number of lymph nodes removed was 1.65. All patients underwent physical examination and axillary ultrasonography, which showed axillary lymph node in 3 patients of 31, 48 and, 62 years. Tumors in all 3 patients were located in the upper lateral part of the axilla and 3 lymph nodes were excised. Only 1 patient had histologically confirmed tumor extension into the axillary lymph node.

Axillary recurrence after a long-term follow up of patients with negative sentinel lymph node is very rare and our study suggest that the SLN procedure is a gold standard method for the staging of breast cancer.

Breast cancer is the most common cancer specific to women and the first cause of mortality in women aged between 20 and 59. The incidence of breast cancer has increased in women older than 50 years and also considerably in elderly women, who undergo screening mammography (1).

Many studies have been performed on the benefits of sentinel lymph node biopsy (SLNB). In a clinical trial performed by Del Bianco, 677 patients with breast cancer, who underwent axillary lymph node dissection (ALND) or sentinel lymph node biopsy (SLNB), were studied. The ALND was performed only for positive sentinel lymph nodes. All patients were evaluated in terms of physical morbidity and health-related quality of life. The results revealed that lymph edema, movement limitation, pain, and insensibility were considerably lower in the patients who had only undergone SLNB. Also, the mean scores of the psychological general well-being (PGWB) were significantly better in the SLNB group than in the ALND group (P = 0.01) (2).

In SLNB method, radio-isotope and/or patent blue dye is injected into different areas of the breast. Then, path of this material is followed until reaching to the lymph nodes.

In cases with involved sentinel lymph node (SLNs), the present current conventional method offers an additional axillary treatment. The complementary treatment includes removal of nodes from I and II levels of the axilla. In clinical trial tests, axillary radiotherapy is performed to avoid dissection of the axillary nodes (4).

Schwartz et al. have suggested a variety of factors that may affect the false-negative rate of SLNB procedures in early breast cancer. Their study on 283 women, who had undergone SLNB, determined and compared the effective variables, such as histologic and nuclear grade, tumor margins, lymph-vascular (lymphatic and vascular) invasion, tumor type (ductal or lobular), and the status of estrogen and progesterone receptors. Lymphovascular invasion and ductal carcinoma in situ (DCIS) are the most significant risk factors tending to micro-metastasis in SLN (5). The aim of this study is to evaluate the axillary recurrence rate in patients with negative sentinel node biopsy.

The participants of this cross sectional study included patients who had undergone SLNB with no axillary dissection due to negative sentinel lymph node biopsy (inclusion criteria) from 2006 to 2010.

According to the medical records, 150 patients met the inclusion criteria and entered the study. They were invited to the breast cancer clinic of Omid hospital for the follow up examination. Patients were examined by a surgeon to find axillary lymphadenopathy. Ultrasonography was done by a radiologist. The axillary ultrasonography was performed to determine the recurrence. Biopsy was done in cases of recurrence by surgeon. Sonographic machine characteristic included Mindray DC7 or ESOATE class C ultrasonography system, 10 or 12 MHZ probe.

The exclusion criteria were patients who did not participate in the follow up study. All patients were informed about the method of study.

Data analysis was performed by SPSS software version 18 and results were shown in tables and graphs. To evaluate the difference between the groups of with and without axillary recurrence, the independent sample t test or Mann-Whitney U test were used for quantitative variables. Qualitative variables were compared, using the Fisher’s exact and Chi-square tests. The value of P < 0.05 was considered statistically significant. This study was conducted in Mashhad, Iran. This study was done as a survey and all medical records were evaluated; therefore, we did not need sample size calculation.

This study was approved by the ethics committee of Mashhad University of Medical Science.

Among 150 patients referred to Omid hospital, who had negative sentinel lymph node and axillary dissection was not performed for them, 52 were evaluated in terms of the rate of axillary recurrence.

The histopathology of all the cases was invasive ductal carcinoma. The upper outer quadrant was the most common primary tumor site (47 cases, 90.4%), followed by the upper inner quadrant (3 cases, 5.8%), and lower inner quadrant (2 cases, 3.8%).

Tables 1 to 3 show some of the results.

Ultrasonography showed axillary lymph node in 3 patients and biopsy confirmed tumor recurrence only in 1 patient. The latter patient was 48 years with primary tumor size of 4 × 1.2 cm2, which was located at the upper outer quadrant and 4 surgically removed lymph nodes. 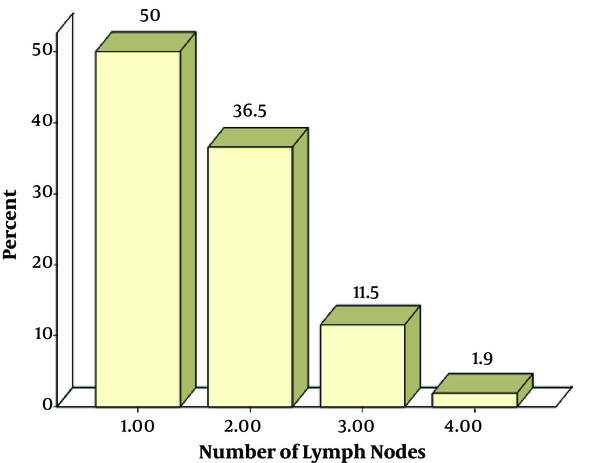 Accurate staging of the breast cancer by SLNB could be related to avoidance of extensive lymph node removal in this method. It could also provide the pathologist with more slides and, therefore, more accurate evaluation is done (6).

In a study carried out by Schrenk et al. among 227 patients with detected SLN, 155 were SLN negative. In only 83 out of 155 patients, the SLN was removed from the axilla. In 22 month follow up, no local recurrence or systemic metastasis were observed. Also, no lymphedema, insensibility, or decreased arm mobility (function) were noted. One case of seroma formation and 1 case of wound infection were also detected during follow up (8).

In some studies, SLN biopsy and ALND have been used for the patients with breast cancer. All of these studies have mentioned the risk of false negative samples, ranging from 0% to 22.2% (9-15). Also, a meta-analysis of 13 studies with 912 patients reported a false negative rate of 5.1% (16).

The histology of the SLN accurately predicts or reflects status of the remaining axillary lymph nodes. This finding was confirmed by the study of Gill (17), and Lo et al. (18), which showed accuracy of 95%, the false negative rate of 5% to 15%, and negative predictive value of 98%.

Several studies have indicated the accuracy of SLNB and many medical centers have recommended SLN removal alone when SLNB is negative (20-25).

In another study, 696 patients with breast cancer, who had undergone SLNB, were evaluated. A total of 676 SLNs were identified and well-located with a median of 2 nodes (range 0 - 9) per patient. No tumor was found in 439 cases (65%), of whom 2 cases of axillary recurrence were detected 4 and 27 months later, respectively (26).

Some studies have dealt with the significance of tumor site in prediction of the false negative SLNB. The SLNB procedure has been successful in patients with smaller tumor size and a lower false negative rate. Holwitt et al. reported that tumor size is associated with the accuracy of SLNB method, as the predictive value is 100% in tumor size < 2 cm. They also found no relationship between the number of lesions and accuracy of SLNB (27). The result of our study showed that the mean primary tumor size was 2.36 × 2.40 cm.

The histopathology of all the cases was invasive ductal carcinoma.

The success rate in identifying the sentinel lymph node is affected by drainage site in addition to the type of histologic tumor, number of lymph nodes, and technique used (both radio-isotope and Dye methods). The presence of tumor in the lower inner quadrant has a significant negative effect on the success rate of all techniques (29-31). Prior excisional biopsy and patients’ age have a negative effect, while the experience of surgeons and colleagues has a positive effect on the identification rate of the SLNs. Also, the biopsy of previous excisional and patient’s aging have a negative effect, and the increased experience of surgeon and colleagues has a positive effect on finding sentinel lymph node (29). In our study, the upper outer quadrant was the most common primary tumor site (47 cases, 90.4%), followed by the upper inner quadrant (3 cases, 5.8%), and lower inner quadrant (2 cases, 3.8%).

The rate of axillary recurrence after negative SLNB based on 8 different studies with a mean duration follow up of 34.9 months was 0.51% (32-39). The society-based study of Poletti et al. at general hospitals showed that SLNB is a reliable and risk-free method in cases of early breast cancer (34). Although, report of longer- term follow up by Bregkvist et al. showed a higher rate of recurrence (37).

In another study, 383 patients with negative SLNB undergoing breast conserving treatment were evaluated from 9 medical centers. Median follow up was 19.5 months. Recurrence was observed in 3 patients. Distant metastasis without local recurrence developed in 1 patient (0.3%) and axillary recurrence in 2 patients (0.5%). One case (0.3%) presented with distant metastases without local recurrence and axillary recurrence developed in 2 cases (0.5%). In one case, 2 lymph nodes and in another case, 1 lymph node each sized 22 mm in diameter were removed, and the latter patient died 2 months after diagnosis (40).

Also, in the present study, ultrasonography showed axillary lymph node in 3 patients and biopsy confirmed tumor extension only in 1 patient. The latter patient was a 48-year-old female with a primary tumor sized 4 × 1.2 cm, which was located at the upper outer quadrant and 4 surgically removed lymph nodes.

Axillary lymph node dissection is followed by known complications, such as wound infection, limitation of shoulder movement, arm problems (dryness and insensibility), and pain and lymph edema. Using SLNB and prevention of ALND, when indicated, avoids these complications. Also, removing sentinel lymph nodes is associated with significantly lower morbidity rate compared to the axillary dissection. Smaller tumors and breast cancer in lower stages are associated with lower possibility of axillary metastasis. In this condition, if SLNB shows no involvement, the surgery of axillary dissection with many complications and no additional benefits is not recommended.

In Conclusion, Axillary recurrence after a long-term follow up of patients with negative sentinel lymph node is very rare and our study suggest that the SLN procedure is a gold standard method for the staging of breast cancer.

The results described in this paper were part of a thesis submitted by the first author to the Mashhad University of Medical Sciences for a postgraduate degree in general surgery. We sincerely acknowledge Ms. M. Hassanpour for editing the manuscript.