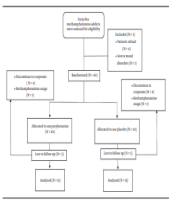 The Effect of Perphenazine Add-On Therapy to Matrix Intervention on Control of Craving and Relapse in Methamphetamine Users: A Randomized Controlled Trial

Compulsive behaviors, loss of control, and social and occupational dysfunctions are complications of methamphetamine dependence.

This study aimed to investigate the effectiveness of perphenazine on control of craving and relapse in methamphetamine users.

This double-blind randomized controlled trial was performed in 2017 - 2018 in Isfahan, Iran. The samples included 40 methamphetamine-dependent subjects referred to drug rehab centers in Isfahan. While the intervention group received perphenazine for eight weeks, the control group received placebo tablets. Also, both groups were followed up for four months. Cocaine Craving Questionnaire-Brief (CCQ-Brief) was filled for each patient before and after the intervention. The comparison were conducted using the repeated measures analysis of covariance (ANCOVA). All analyses were performed by SPSS 20 Software. A P-value equal to 0.05 was considered as significant.

Adding perphenazine to the matrix program in the treatment of methamphetamine use disorder showed significant effect on the reduction of the craving to methamphetamine.

Amphetamine-type stimulants (ATS) refers to a group of synthetic stimulants, including amphetamine, methamphetamine, 3,4-methylenedioxy-methamphetamine (MDMA), and related substances. These are highly addictive substances, and chronic use may result in a series of mental and physical disorders. Amphetamine was made as a drug in Germany in 1886 for the first time. First cases of amphetamine abuse were reported in 1936, and first epidemic of amphetamine abuse was observed in Japan after the Second World War (1). Methamphetamine was reported to have beneficial effects on migraine, alcoholism, epilepsy, narcolepsy, and attention deficit hyperactivity disorder (ADHD) (2, 3). Nowadays, methamphetamine is being abused widely and is also known to have high dependency (4).

According to the evidence, methamphetamine abuse has widely increased in Iran in recent years, and methamphetamine is the second drug used in the country. Also, the age of consumers has declined from 25 - 29 years in 2000 to 10 - 19 years recently (5, 6). Moreover, methamphetamine is more available than cocaine, and it is commonly used orally, as well as by sniffing and injection.

Addiction to methamphetamine is very destructive and leads to dysfunction of academic career. Methamphetamine abuse could lead to dysfunctions in brain reward system and increase dopamine. The methamphetamine withdrawal symptoms include depression dysphoria, anxiety, mood swings, as well as sleep and attention defects (2). Different treatment protocols have been proposed for drug addiction, especially methamphetamine use disorder. Drug addiction requires individualized treatments and modalities that address the symptoms and underlying causes of the disease, as well as the consequences that substance use has on different areas of a person’s life.

Matrix program is a complex treatment protocol consisting of behavioral cognitive, and psychological methods for methamphetamine addiction (4, 5). The matrix model provides a framework for engaging stimulant (e.g., methamphetamine and cocaine) abusers in treatment and helping them achieve abstinence. Patients learn about issues critical to addiction and relapse, receive direction and support from a trained therapist, and become familiar with self-help programs. Patients are monitored for drug use through urine testing. During the program, patients able to perform daily activities are visited weekly. Studies described that matrix program is an effective method, which can be mixed with other methods. Matrix materials include elements of relapse prevention, family and group therapies, drug education, and self-help participation. Detailed treatment manuals contain worksheets for individual sessions, and other components include family education groups, early recovery skills groups, relapse prevention groups, combined sessions, urine tests, 12-step programs, relapse analysis, and social support groups. Some studies also showed that matrix program is an educational program (6).

Perphenazine is a class of antipsychotic drugs, chemically classified as a piperazinyl phenothiazine. Perphenazine is an antipsychotic medication that inhibits postsynaptic dopaminergic mesolimbic receptors. This drug is used mostly in agitated depression, positive symptoms of schizophrenia such as hallucinations and delusions, and the manic phases of bipolar disorder (7). Perphenazine helps to balance the patient’s mind and makes the patient less nervous and more involved in daily activities. Also, it can improve the patient’s balance due to its chemicals and brain compounds, such as dopamine. Several studies showed that perphenazine could have beneficial effects on the treatment of methamphetamine psychosis. Some others believe that perphenazine might prevent cravings in methamphetamine abusers, though more studies are required in this regard (8, 9).

This double-blind randomized controlled clinical trial was conducted on 40 methamphetamine-dependent subjects in Isfahan, Iran, in 2020. The study protocol was approved by the Iranian Registry of Clinical Trials (IRCT20090801002266N13).

The inclusion criteria were males aged 18 - 50 years with methamphetamine use disorder according to DSM-V criteria and referral to a non-governmental drug rehab center in Isfahan. All participants signed a written informed consent to participate in this study. The subjects had used amphetamine for one to three years and were only methamphetamine users and not other drugs.

The Cocaine Craving Questionnaire-Brief (CCQ-Brief) was completed for each patient. Since there is no specific questionnaire for methamphetamine and because the craving pattern of methamphetamine is similar to cocaine, CCQ-Brief was used. This 10-item questionnaire is a brief form of the 45-item CCQ questionnaire prepared by Sussner et al. Its reliability was confirmed by Cronbach’s alpha score 0.90 (10). To validate the Persian version of the CCQ-Brief, the questionnaire was translated into Persian by two psychiatrists, and then two other psychiatrists who were fluent in both English and Persian languages, translated it into English. The translated versions were evaluated for a final decision by three other psychiatrists. The highest score a person has on CCQ-Brief is 70, and the lowest score is 10. The questionnaires were completed within four months.

Out of a total of 45 patients, five cases were not allocated due to patients’ refusal (n = 2) and severe mood disorder (n = 3). The 40 selected individuals were then allocated into two groups of intervention and control using a random allocation method. All patients were enrolled in the matrix program for eight weeks as a routine treatment program at our medical center. Then, the participants were assigned to self-help groups for long term follow-ups.

We arranged an eight-week intervention program with perphenazine or a placebo for each group. In the intervention group, perphenazine was started with the dose of 8 mg/day. Then, within four weeks, it was increased to 32 mg/day (increase of 8 mg/week), and the same dose was taken over the next four weeks. On a daily basis and before the beginning of matrix program sessions, the drug was delivered to patients by trained personnel, and on holidays, the drug was delivered to the patients themselves. The way of consuming the drug at home was taught to all subjects. In the control group, we used the placebo with the same pharmaceutical form of perphenazine, developed by the School of Pharmacy at Isfahan University of Medical Sciences.

In the intervention group, perphenazine started at 8 mg/day. If the craving to methamphetamine persisted, the dose was increased by 8 mg/week to reach the final dose of 32 mg/day and continued until the end of the intervention. The placebo group received the same drug form and same protocol as perphenazine (Figure 1). 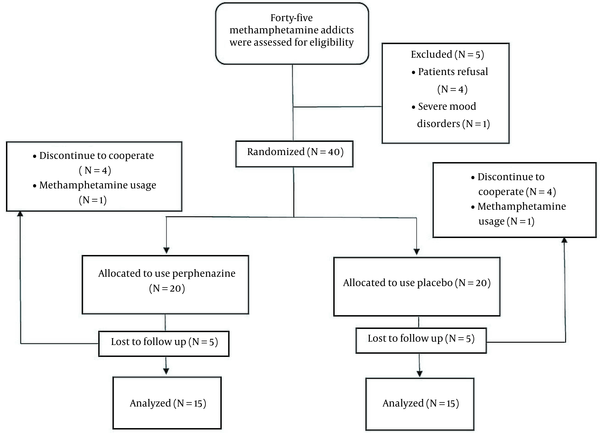 COSORT flow diagram selection and allocation of the patients

A psychiatric resident visited the patients every week for the first eight weeks and then every two weeks for four months up to the end of study to assess the probable relapse to methamphetamine use and the severity of craving to methamphetamine. In each session, the relevant questionnaire was completed, physical examinations were performed, urine test was taken, and side effects were assessed. Using physical examination checklist, the drug side effects were evaluated. Patients were asked if they had any specific symptoms.

After the eight-week program, the patients were followed for four months. The comparison of effects were conducted using the repeated measures analysis of covariance (ANCOVA). All analyses were performed by SPSS 20 Software (SPSS, Chicago, Illinois, USA). A P-value equal to 0.05 was considered as significant.

There were no significant differences between the two groups in terms of age, sex, education, marital status, and duration of addiction (P > 0.05) (Table 1).

Table 1. Demographic Data of Participants in the Study Groups (n = 40) a

Repeated measures ANCOVA and t-test were used to assess the changes of CCQ-Brief over time and evaluate the effects of the intervention. There were significant changes over time (P < 0.0001) (Table 2).

Table 2. Mean and Standard Deviations of Cocaine Craving Questionnaire-Brief Scores and Relapse in the Study Groups (n = 40) a

Some previous studies investigated the effects of antipsychotics on methamphetamine addiction. Beresford et al. declared that both aripiprazole and perphenazine could reduce methamphetamine cravings (9). They evaluated CCQ-Brief in 44 subjects and showed significant improvement in the results of CCQ-Brief in both groups (11). Misra et al. evaluated the positive effects of olanzapine on methamphetamine cravings and described that antipsychotics might have beneficial effects, and further studies should be performed in this regard (12). A systematic review and meta-analysis by Kishi et al. reported that the use of antipsychotics, including perphenazine, thioridazine, mesoridazine, and molindone, were associated with improvements in cravings and could be used in methamphetamine-induced psychosis (13). Some other studies suggested that perphenazine could be a useful medication in the treatment of methamphetamine-induced psychosis (14, 15).

Our results were not in line with some previous studies, emphasizing the effectiveness of perphenazine on methamphetamine cravings.

Some other studies evaluated the effect of anti-depressants and other medications on methamphetamine cravings, but they demonstrated paradoxical results in changing the cravings of methamphetamine abusers (16, 17). In the previous studies, antidepressants (such as fluoxetine, sertraline, paroxetine, imipramine, and mirtazapine) and GABAergic drugs (such as gabapentin and baclofen) (18) failed to reduce the desire to consume methamphetamine.

These results suggest that perphenazine may potentiate matrix intervention, which is based on a cognitive-behavioral approach employing a series of structured techniques, such as motivational enhancement, skills training, cognitive restructuring, relapse prevention, stress management, emotional control, and contingency management. The matrix for substance-use disorders is mainly designed to identify triggers and equip drug abusers with cognitive and behavioral skills to cope with these triggers to achieve and sustain abstinence from methamphetamine. Due to the severe anxiety experienced by methamphetamine users, the addition of perphenazine and matrix intervention can simultaneously help reduce anxiety and regulate cognitive and emotional well-being.

Regarding the high prevalence of methamphetamine use, adding perphenazine to matrix program might be a hopeful treatment option for reducing the relapse in methamphetamine users. Further studies with larger sample size and longer duration are needed to confirm the results.

In line with the results of this study, a randomized controlled trial showed that the addition of perphenazine in matrix interventions is effective in controlling the desire to consume and has a positive effect on reducing recurrence in the withdrawal process and beyond.

Small sample size, short duration of trial, and limited to male sex were the main limitations of this study.

Copyright © 2022, Author(s). This is an open-access article distributed under the terms of the Creative Commons Attribution-NonCommercial 4.0 International License (http://creativecommons.org/licenses/by-nc/4.0/) which permits copy and redistribute the material just in noncommercial usages, provided the original work is properly cited.
download pdf 247.86 KB Get Permission (article level) Import into EndNote Import into BibTex
Number of Comments: 0