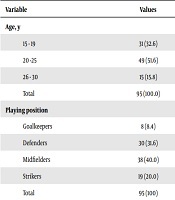 It has been well documented that adequate body composition characteristics and good nutrition practices play significant roles in maintaining good health, proper immune functioning, muscle growth and repair, and delaying fatigue in continuously intense athletic performance. It would be incumbent, however, to support imported information with local data to enhance effective implementation.

To examine dietary intake and body composition characteristics of National Football League Players in the Ashanti region of Ghana.

Cross-sectional study was used. 95 football players from the premier, 1st and 2nd divisions of the Ghana National Football League were recruited. A 24-hour dietary recall was used to assess the dietary intake of the players. Body composition characteristics of body mass index, percentage (%) body fat, visceral fat and percentage (%) muscle mass were measured.

The sample in this study has low total energy intake compared to other studies. Insufficient nutritional diets could suggest the reason for the low energy intake. If low energy intake persists, the players might be at high risk of chronic cardiovascular diseases and diabetes conditions.

Football, also known in some countries as soccer or association football is the world’s most popular sport with an estimated 250 million players across about 200 nations and their dependencies globally (1). It is played with a ball spherical in shape with the aim of scoring by moving the ball across the goal line (1). Football is a team sports characterized by an intermittent high intensity play which is intermingled with episodes of recovery (2). The general season for any professional football player is divided into 3 periods; pre-season, in-season and the off-season. During preseason, the training demands for any professional football is so intense that they may be required to cover about 20 km combined with a modified training volume and match play during competition (2).

The high intensity nature of play and training for football players demand that they fuel appropriately through good nutrition and water. Among athletes especially football players, proper and adequate nutrition is essential for replacing and regenerating depleted hormones, energy reserves, nervous functions, dehydration and transfer of electrolytes (3), maintain lean muscle mass and promote optimal performance (4). Football players like any other athlete participating in team sports as a result of the extreme demand on the cardiovascular, metabolic and energy stores, have a special consideration when it comes to nutrition (5) as restrictive diet and their high requirements for certain nutrients and energy can result in high risk of suboptimal dietary intake among the players (6). Athletes, like football players need to continuously replenished their energy stores especially during training and competition as their energy reserves may not be enough for a longer term.

Inadequate dietary intake and over-consumption among athletes may lead to body composition and body weight changes (5). The changes which may come as a result of the inadequate or overconsumption may have an adverse impact on the player’s ability to perform and sustain activity during competition and in-season (7). Besides, the maintenance of energy balance through adequate energy consumption is necessary to accomplish right consumption of essential macro-and micro-nutrients for the athlete (7).

The main nutrients required for football players is carbohydrates and so it is recommended that they consume about 7 - 10 g/kg of body weight for carbohydrates (8) and 1.2 - 1.7 g/kg of body weight for protein since the contribution of proteins to the production of energy is low (7). It is also recommended that athletes consume about 20% - 35% of their total daily energy requirement from fat (7). The recommend intake of Carbohydrates is adequate to maintain plasma glucose levels and replenish muscle glycogen stores while the protein intake is also adequate to support nitrogen balance, spare amino acids for protein synthesis and to maintain optimum performance (7-9). Inadequate dietary intake will lead to low levels of cortisol and reduced activities of the antioxidant enzymes, high cell damage which may result in reduced performance and injuries (3, 10). Even though there has been so much research on the significance of nutrition among football players, little has been done concerning the intake of energy and nutrients among Ghanaian football players. Again, there is also lack of data regarding body composition and nutrition status among Ghanaian players.

The main objective of this study was to assess the body composition and dietary intake among football players of some selected football clubs in the Ashanti Region of Ghana.

The study followed a cross-sectional study design. The players were recruited from the premier, first and second divisions of the Ghana National Football League located in the Ashanti region of Ghana.

Non-probability convenience sampling technique was used to select the players. Ninety (95) football players from the premier (n = 35), first (n = 30) and second (30) divisions registered for Ghana National Football League for the 2018/2019 season with their respective clubs. Each of the clubs had commenced pre-season training. Permission of the club management, coaching crew and individual players were sought. Each player signed informed consent and ethical approval was given by the Committee on Human Research, Publication and Ethics (CHRPE) (CHRPE/AP/470/16) of the Kwame Nkrumah University of Science and Technology (KNUST).

Socio-demographic characteristics of the players were obtained.

A 24-hour dietary recall was used to assess dietary intake of the players. The dietary intake was assessed on two week days and one weekend. The quantity of the foods eaten by the players were assess using handy measures of the various food items. The food weight (in grams) were then recorded. The nutrient analysis template (Tayie and Lartey, 1999; West African Food Composition tables, 2012) were used to analyzed the various nutrients in the food.

The Statistical Package for Social Science (SPSS) (version 23.0, IBM Corporation) was used for data analysis. Mean and standard deviation were reported for the continuous variables while categorical variables were presented in percentages. ANOVA was used to compare the means of the players of particular teams and their dietary intake. A cross tabulation analysis was also done to assess the players and their teams against their respective dietary intake and body composition data.

Table 2. Distribution of Anthropometric Parameters and Dietary Pattern of Playersa

A cross tabulation of age, playing positions, and anthropometry was shown in Table 4. The BMI and muscle mass of the players were dependent on age. The 5 underweight players were found in the youngest year group, while the overweight were in the 20 - 25 and 26 - 30 year groups. The visceral fat was normal for all the year groups. On the other hand, percentage body fat of the players was dependent on age, and playing position. Players of the age group 20 - 25 years constituted the majority of those who had normal body fat. Midfielders predominated the players with normal body fat, followed by defenders.

Table 4. Relationship Among Anthropometry and Age, Playing Positions and Teams of Playersa

It was also shown that all the players had normal visceral fat and most of the players had a high and very high muscle mass. This is in agreement with similar studies where a high muscle mass was found among athletes (16-18). This also underscores the study by Davison et al. (19), which reported that a high muscle mass, correlates to a low total body fat. From Table 2, most of the players (66.6%) were eating either once or two times in a day and so could not meet their dietary goals. Good dietary intake is an important component of a soccer player’s health and sporting future (20). Despite this, the soccer players are not meeting their dietary goals. This could be due to players having low financial status and so could not afford 3 meals a day.

From Table 3, it is observed that BMI, percentage body fat and visceral fat increased as age increased, with players between 26 - 30 years having the highest. This was similar to the work done by Meeuwsen et al. (21), who also reported a direct relationship between age and BMI and percentage body fat. This means that as one grows older, his or her BMI increases. As shown by Table 4, all the underweights (5, 5.3%) were found to between the ages of 15 - 19 years. Very high percentage body fat was more prevalent among the goalkeepers (2.1%), compared to other playing positions. According to playing positions, the goalkeepers had the highest mean total energy intake, as well as highest mean intakes of carbohydrates, proteins and fats, even though they were not statistically significant (Table 5). The energy and nutrient intakes in this study are in contradiction to the total energy intake reported by a study done by Iglesias-Gutiérrez et al., (22). They reported a total energy intake of 2600 ± 641, 2766 ± 452, 2855 ± 475 and 2779 ± 659 for Goalkeepers, Defenders, Midfielders and Strikers respectively. The dietary intakes observed in this study were lower as compared to studies done by Rico-Sanz (22), Leblanc et al. (23) and Iglesias-Gutiérrez et al. (24). This shows that the Ghanaian players were having low energy intake, compared to other soccer players in other countries. This could be due to sub-optimal dietary intake, as most of the players were eating either once or two meals in a day. Sub-optimal dietary intake could lead to poor performance in competitions (25).

Copyright © 2020, International Journal of Sport Studies for Health. This is an open-access article distributed under the terms of the Creative Commons Attribution-NonCommercial 4.0 International License (http://creativecommons.org/licenses/by-nc/4.0/) which permits copy and redistribute the material just in noncommercial usages, provided the original work is properly cited.
download pdf 125.22 KB Get Permission (article level) Import into EndNote Import into BibTex
Number of Comments: 0