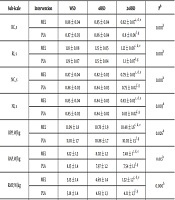 Melatonin is one of the Supplements used to treat sleep problems such as insomnia and jet lag.

Since sleep deprivation may affect athletic performance, the aim of this study was to investigate the effect of melatonin on neurological function and maintenance of physical and motor fitness in collegiate student-athletes following sleep deprivation.

Sleep plays a vital role in the body’s biological functions and sleep deprivation can have significant effects on athletes’ performance (1). Athletes and coaches also believe that getting enough sleep is essential to achieving peak performance, but conditions such as long trips and pre-competition anxiety would probably provide the athletes with sleep deprivation. Nevertheless, sleep function is not fully understood and few studies have focused on the effects of sleep deprivation on neurological training performance (2). On the other hand, insomnia is common among collegiate students due to the heavy academic performance and socio-cultural requirements of living in dormitories (3).

The existing literature indicates that lack of sleep can affect motor psychomotor function including simple and selective reaction time (4); it can also have a negative effect on physical function (3) and since special neurological and physical function are important factors on athletic performance, it can change the outcome of the game (4).

While, sleep problems are a potential risk factor for injuries, it has been shown that 24HSD would lead to injury in athletes due to physical and cognitive impairment (5).

Previous studies have shown that daily consumption of MEL had no significant effect on cognitive and physical function in the morning and one-hour before the start of physical activity in soccer players (1, 7). On the other hand, research emphasizes on improving neurological and physical-motor function following MEL consumption (6, 8).

In brief, the results of research on the effect of MEL on athletic performance are very limited and the results are contradictory. On the other hand, previous studies used doses lower than 6 mg and the results showed no significant difference (6). Considering the importance of sleep in athletes, we examined the acute effect of MEL following long-term and partial sleep deprivation on neurological function (reaction time) and some indicators of physical and motor fitness (anaerobic power, static and dynamic balance).

The present study was a double-blind randomized placebo-controlled trial. Ten collegiate student-athletes volunteered from of Imam Khomeini International University (Male 18 - 25 y with body mass index (BMI) between 18 - 25 kg/m2, high score 5 in sleep quality test and no difference in micronutrient and macronutrient intake). Inclusion criteria include: (A) History of the championship; (B) no history of acute or chronic illness; (C) no medication or dietary supplement in the previous 6 months; (D) no smoking and alcohol use; and (E) depression Less than 13 according to Beck Depression inventory. Exclusion criteria were (A) having vigorous physical activity 48 hours before or during the study; (B) disturbing the circadian rhythm before the protocol; and (C) unwillingness to continue participating in the study. The research protocol was approved by the Research Ethics Committee of Imam Khomeini University with the code IR.QUMS.REC.1397.402.

Six groups with crossover method set in three sleep conditions of 24HSD, 4HSD and WSD and two supplementation conditions (six Mg/day MEL was taken 30 min pre of training protocols at 5 AM and placebo). One week before the study, the volunteers were given a special diet. 72 hours were allocated for recovery of individuals after the training protocols.

In this study, the Vienna Functional test was used to assess short-term attention and concentration before and after the interventions. Short-term attention and concentration assessment test is one of the neurological tests to examine cognitive and mental components such as reaction time, selective accuracy, attention and concentration, the overall result of which shows the subject’s selective attention capacity (1). The Wingate cycle ergometer (model 894E, Monark, Sweden) was used to measure anaerobic power. Subjects began to pedal for 5 min (loading one watt/kg of body weight) and then the main protocol was performed as a 30-second repetition with 7.5% of body weight. Finally, the anaerobic power output index (peak, relative and average) was recorded as the anaerobic power index (9). The Good balance instrument (Metitur, Jyvaskyla, Finland) was used to measure static and dynamic balance. The feedback provided by the visual stimuli was given to the subjects to maintain balance in both static and dynamic positions. The validity and reliability of this tool have been confirmed in previous studies (10).

The normal distribution of data was confirmed using the Shapiro-Wilk test. The Mauchly test was tested and confirmed to be spherical. Statistical analysis was performed using SPSS software (SPSS Inc., Chicago, IL). Repeated analysis of variance was performed to analyze the data with a significant of less than 0.05.

As shown in Table 1, 6 mg/day MEL ingestion has not significant effect (P > 0.05) on neurological and physical performance in collegiate student-athletes during the without a sleep deprivation night.

Previous research has shown that recovery process occurred three to four times faster in adolescents with sleep disorders who take MEL use improved 67% of patients with sleep disorders (11). Laboratory research has shown that a number of sensory, perceptual, and motor functions can be altered by insomnia or lack of adequate sleep. The circadian rhythm of sleep has positive effects on improving the athletic performance and if this rhythm is disturbed for any reason, it has negative effects on the quality of athletes’ performance (12). Insomnia has a great effect on cognitive impairment, accuracy and concentration and even the quality of training (13).

The researchers stated that short-term sleep deprivation has no effect on anaerobic function, while it has a negative effect on cognitive function such as reaction time (1, 14). However, other studies have shown that partial sleep deprivation leads to a decrease in mean and peak anaerobic power (9, 15). One of the possible mechanisms of positive effects of MEL on anaerobic capacity is the increase of liver lactate concentration and decreasing plasma lactate concentration after activity. MEL also increases intracellular calcium in muscles and liver, which helps to improve the muscle contraction mechanism in anaerobic activity (16).

MEL has a positive effect on improving equilibrium and balance with its effects on the cerebellum. Reduced heart rate and better physiological responses also lead to visual acuity, sensory mechanisms, atrial system, postural control, and balance. Research has also shown that the negative effects of sleep deprivation on postural control would be due to reduced visual input, atrial system function, and impaired musculoskeletal function (17). Research has shown that partial sleep deprivation increases reaction time and decreases selective and continuous attention (1). Research has shown that performance on the Stroop test is highly associated with an increase in reaction time and the number of errors following sleep deprivation in females (12). Sleep deprivation affects the entire attention network, which is made up of many closely related connections to cortical areas. It also increases the level of stress hormones and reduces constant attention and functional memory (18). It should be noted that the frontal lobe is highly sensitive to sleep deprivation which reduces brain activity and also a decrease in neurological function occurs through the thalamus and peripheral cortex by which both parts mediate the network of consciousness, attention, and cognitive processes (1, 18). Anxiety, psychological and physical stress following sleep deprivation appears to weaken the body’s response to sudden stimuli. MEL consumption can affect neuromuscular accuracy and coordination by increasing perceptual and cognitive activity of the brain and concentration of the senses through sympathetic inhibition (6, 7).

There are some limitations in the study. The sample size was small. On the other hand, although subjects were instructed to maintain their usual diet and activity levels, no exact monitoring was performed; the experiment was also performed in dormitory conditions and it was not possible to control the level of stress in all subjects.

MEL has no effect on the neurological or physical function of athletes who are not deprived of sleep. However, during 4HSD, when the accuracy of postural control decreases, and in 24HSD, as reaction time, anaerobic power and balance are negatively affected, taking 6 mg/day of MEL 30 min before training greatly reduces the negative effects of sleep deprivation.

The authors of this paper would like to express theirthanks to all the participants in this study.

Copyright © 2020, International Journal of Sport Studies for Health. This is an open-access article distributed under the terms of the Creative Commons Attribution-NonCommercial 4.0 International License (http://creativecommons.org/licenses/by-nc/4.0/) which permits copy and redistribute the material just in noncommercial usages, provided the original work is properly cited.
download pdf 115.69 KB Get Permission (article level) Import into EndNote Import into BibTex
Number of Comments: 0