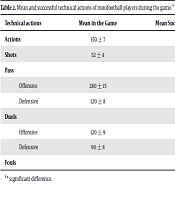 The aim of this study was to investigate the technical actions and heart rate response of amateur minifootball players during a competitive match.

A minifootball match is of high intensity and requires a high level of physical and technical ability.

Minifootball is the name for the 6-a-side outdoor format of soccer (i.e., 1 goalkeeper and 5 outfield players) that is directed by the International Minifootball Federation (WMF), and utilizes aspects of different sports (futsal and handball). Minifootball’ denotes small-sided football games for amateur players. The WMF has the aim to promote and direct minifootball practice. Also, to contribute to a development of the society. Minifootball is played by many players in the five continents: Furthermore, the WMF organize a lot of competitions such as the World Cup and Continental Championships.

The time of the game in minifootball is 2 × 25-min. High-intensity and intermittent actions in this game requiring high amount of efforts. The field measures 46 × 26 m (artificial playing surface) with two 4 × 2-m goals. Minifootball is played within amateur leagues and uses a size 4.5 ball (circumference: 66 - 67.5 cm). During WMF competitions, unlimited substitutions are permitted.

Minifootball is an intermittent sport, with rapid changes in direction, moving, stopping, jumping, and kicking, comparable to futsal, although there are some small differences between these two sports, e.g., field dimensions: 46 × 26 vs. 20 × 40m, players’ number: 6 vs. 5 players, game duration: 2 × 25 vs. 2 × 20 min, respectively. Many studies have sought to investigate the demands of futsal match using internal and external indicators, movement analysis (1, 2) and analysis of physiological data, such as heart rate (3).

However, despite the popularity of minifootball, to our knowledge, no research has been published on the sport, potentially due to the lack of interest in budget to this game Understanding minifootball skills could help to the transfer of many information to the player, yielding a greater understanding of the physiological and skill demands, aiding in the expansion of this new sport.

Therefore, using technical analysis and heart rate monitoring, the purpose of this study was to investigate the technical actions and physiological parameters heart rate (HR) of match play in amateur minifootball players.

We sought to investigate the technical aspects and physiological responses (HR) to a minifootball match, from the first Tunisian division (during the season). In this match, players were monitored by a video system, and all players who participated in the match were followed (except the goalkeepers).

Play was recorded by two high definition video cameras (Casio EX-FH 25, 640 × 480 resolution, and acquisition frequency at 30Hz). These cameras were positioned aerially (10m from the pitch) and remained in a fixed position during the whole match. Each camera covered a part of the court, in order to completely monitored court area. The videotapes were analyzed using InStat, which is a sports performance tool for individual and team performance evaluation and scouting. InStat provides access to a wide range of team and individual data and statistics, including as means and percentages of various technical actions (pass, shots, actions, duels, fouls).

Heart rate was recorded continuously in this match every 5 s using Polar Team Sports System (Polar Electro Oy, Kempele, Finland). HR mean values were expressed in absolute values (beats per minute (bpm)) and were utilized to determine the utilized percentage of HRmax (%HRmax) during the match. HR measurements was obtained during the whole time that the players spent on court excluding time spent on the bench.

Data collection, treatment, and analysis were performed using the software STATISTICA (StatSoft®, Maisons-Alfort, France) and were reported as mean and standard deviation (SD). For the analysis of the technical action, data were provided through InStat (Sports Performance Analysis, Scouting. Russia) and were reported as mean and percentage. Differences between the technical actions in defensive and offensive phases were compared using a Student’s t-test. A statistically significant difference was accepted, a priori, at P < 0.05.

The purpose of this study was to investigate the technical actions and physiological responses (HR) during a competitive match in amateur minifootball (six-a-side outdoor soccer) players. The results showed that the minifootball match induced a high intensity (84.2% HRmax) and frequent technical actions, in offensive and defensive phases.

Given that, to our knowledge, this is the ﬁrst study investigating the physiological demands (HR) and the technical actions of minifootball match, the present study’s ﬁndings will be discussed, largely, in the context of futsal, given the comparability between the two sports, and the unavailability of prior minifootball work to refer to

The mean HR and maxHR% recorded during the minifootball match in the present study were comparable to those recorded in futsal matches consisting of professional players (4-6). However, in this context, Barbero-Alvarez et al. (4) examined HR responses during a futsal match and showed a higher relative HR (90% HRmax), whilst Dos-Santos et al. (6) reported a high HR response (88.79% HRmax) during a friendly futsal match with professional Brazilian players. Further, Arslanoğu et al. (5) examined the HR in elite futsal players throughout a whole game, and reported a HR value of 170 bpm. Despite the amateur status of the minifootball players in the present study, a higher HR value was recorded than many studies consisting of professional futsal players. Indeed, this higher HR in minifootball may be attributable to the short and incomplete rest periods, which therein necessitates more effort from players. Moreover, the physiological evaluation in this study indicates that minifootball is a sport eliciting a high intensity, requiring an excellent capacity of intermittent endurance and repeated sprint ability.

In recent years, analysis of match and training has played an important role to develop team sports and to help both coaches and players (7). Skill can be deﬁned as the learnt ability to select and perform the correct technique as determined by the demands of the situation (8). Minifootball players, like futsal, must perform many skills, often in quick succession, such as choosing to make a pass and shooting at goal. The findings of our study showed that the percentage of success in actions during the match was 53.33 %, and in shots was 36.54 %. In the context of futsal, Leite. (9) analyzed the offensive actions of the Portuguese futsal team, and found that the team finalized their offensive phase mainly with organized or tactical game actions (56.89%). Finishing actions is based on two parameters (technical skills, players’ ages). In fact, concerning finishing actions, a significant differences was observed in matches between two categories (under-15 and adult) (10). In the offensive phase, there are two significant indicators of performance (finishing attacking plays and the efficiency), where the efficiency of the finishing action was in a major related to the final result of the game (11, 12). The most successful teams perform a higher number of finishing actions with a higher conversion rate (13). In addition, the utilization of more players in offensive actions is frequently observed

Despite the amateur character of minifootball, it includes continuous run-off running, ball kicks, and accelerations, which are highly physically demanding. Minifootball players can play irrespective defense and attack positions; since the attack-defense passages are very fast, each player has to adopt defensive and offensive features. In the present study, we found a large number of passes and duels, both in offensive and defensive phases (400 with 290 successes, and 210 with 145 successes, respectively). Passing and duels are ubiquitous factors that characterizes team sports such as futsal and minifootball (14) and are considered as a complex perceptual-motor skill. In fact, minifootball players must relate many skills (reception and pass) during match-play with the pitch markings/boundaries impacting upon playing behaviours. Similarly, to our results, Yiannaki et al. (15) reported relatively high amounts of passes per team (647) while analyzing an international futsal match. Despite the smaller area of minifootball game, we found a large number of passes and duels; playing in a narrow space requires the minifootball players to move more, run more and make use of the free spaces, which is conducive to extensive circulation of the ball between players. Since pass errors in smaller area can directly impact the score, players require a high passing accuracy in minifootball (71% in attack and 75% in defense). Indeed, we noted that players were proactive in receiving the ball and used more accurate passes to avoid losing possession. Moreover, the volume of technical actions (passes, shots and duels) and the percentage of success, either in offensive or defensive phases, indicates the importance of individual technique and collective organization in minifootball.

Copyright © 2021, International Journal of Sport Studies for Health. This is an open-access article distributed under the terms of the Creative Commons Attribution-NonCommercial 4.0 International License (http://creativecommons.org/licenses/by-nc/4.0/) which permits copy and redistribute the material just in noncommercial usages, provided the original work is properly cited.
download pdf 114.64 KB Get Permission (article level) Import into EndNote Import into BibTex
Number of Comments: 0