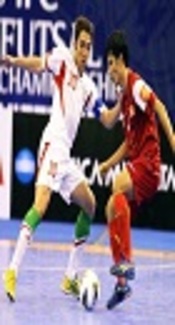 To identify possible key factors that help in predicting success over time in futsal, the purpose of this study was to identify the factors affecting the talent identification process in Iranian futsal players.

It was found that there was a significant difference between effective factors of talent identification in Iranian futsal players. Psychological factors, physical fitness and skill levels were of utmost importance in identifying the talents in futsal. In addition, it was shown that, anthropometric traits, skill levels, physical and motor fitness, social-psychological factors had a significant different priorities in the process of talent identification. The most important factors were respectively: fat percent (of 5 selected anthropometric indices), dribbling skills (of 7 selected skill-based indices), muscular endurance (of 8 selected physical fitness indices), fair play (of 5 selected sociological indices), and anxiety control (of 10 selected psychological indices).

Given the nature and requirements of the games, futsal players need the specific characteristics of psychological factors, physical fitness and skill levels which predominantly improve their overall play to achieve peak performance leading to success in various competitions.

The great advancement in all aspects of sport sciences is not only specific to improving the health in all age groups (1-6), but also to increasing the chances of reaching championship among athletes (7). In this regard, Coaches, athletes and sport policy makers argue that achieving the peak athletic performance is possible by researchers using the latest scientific achievements with respect to measurement of anthropometric, physiological and psychological factors (5, 8, 9). Detecting athlete's innate ability is of utmost importance in talent identification (10). Given the high potential of futsal in Iran, It can be stated that this sport can achieve a better ranking worldwide. Applying the more appropriate scientific programs can be effective in order to identify and discover talented people. Talent identification (TI) process comprises detection, development and selection which is conducted by experts (11). Peltola and Thomson define talent identification as “the process by which children are encouraged to participate in sports at which they are most likely to succeed, based on Comprehensive and screening tests" (12). Talent is an innate ability for gaining achievement or success (13). Practically, a talented person is an individual, having the specific levels of anthropometric traits such as body type, physiological parameters (cardiovascular endurance, neuromuscular properties like neuromuscular coordination); and psychological characteristics (8, 14).

Today, futsal has attracted many interests due to high skill level and the agility of athletes (15). In addition, this is a game with high intensity requiring high physical, physiological, tactical, and technical efforts from players. Given the nature of futsal (such as court size, game system, competition duration, and the skills involved), a great deal of variables play vital roles for success in this sport. The futsal players are expected to decide promptly and perform well in both offensive and defensive tasks at a high tempo (16) Cruz, et al. stated that futsal is a high intensity sport requiring the anaerobic and aerobic power, strength, flexibility, speed and agility. On the other hand, passing, dribbling, and shooting skills have also been concerned with success in futsal (17). So, taking the factors into consideration is necessary in selecting criteria of success in players. Rammos, et al. suggested that skill, anthropometric, psychological and sociological indices are respectively important in talent identification of football players (18). Another study also indicated that top ten factors including ball control, passing, proper positioning, height, passing and attacking, speed, decision making, off-the-ball movement, and responsibility are respectively among the most effective factors in talent identification of football (16). However, no significance was found in psychological factors in terms of predicting the success over time. Yeemin, et al. found that mental imagery and self-esteem in athletes predicts the success in competitions effectively (19). There are several studies reporting that physical fitness and anthropometric traits could be different depending on the type of indoor sport. In this case, not only younger futsal players were lighter compared to players of other sports, but also had more optimal score in flexibility, Sit-ups, speed and physical fitness (17, 20). Some evidences demonstrated that self-control plays a key role in improving the athletic performance especially in elite athletes. Anxiety and psychological stress as the other determinant factors are the consequences of negative thoughts which affect the athletic performance. Some experts argue that if an individual lacks mental stress control, they won’t achieve success. Futsal in Iran was initiated with a traditional game called “Gol Kochack” in the years before the Islamic revolution. It was held in the form of local competitions or in the gym in some cities that was called “Ramadan Cup”. The first participation of the national football team in the World Cup as a turning point, was the Hong Kong World Cup in 1992. Now, the futsal premier league is held with participation of 14 teams each year. Among the achievements of Iran's national futsal team, some are as follow: achieving the title of Asian championship 11 times, the fourth place in the World Cup (1992) and the third place in the world championships (2016). Considering few research regarding the characteristics of Iranian futsal players, it’s highly recommended to study the talent identification process in this popular and Olympic sport. This is not only an influential guide for reaching the elite level, but also is effective in designing the training programs for elite athletes and working on their weaknesses. Therefore, it was aimed to identifying the effective indices for success in futsal to help smart detection of talented players in Iran.

In this study, 74 subjects including 6 national futsal team coaches, 54 junior coaches of Tehran futsal premier league, and 14 university professors were investigated. Data was collected in a standardized form as a self-report questionnaire consisting of 6 components in 37 questions regarding anthropometric (five questions), physiological (two questions), physical fitness (eight questions), skills (seven questions), sociological (five questions) and psychological factors (ten questions). Validity of a questionnaire was established by a panel of sport management experts and its reliability was confirmed by Cranach’s alpha coefficient (0.76). Friedman’s Test was used to analyze the data.

As shown in Table 1, there was a significant difference between effective factors of talent identification in Iranian futsal players (P = 0.001). Psychological factors, Physical fitness and Skill-based factors were among the top-three factors for success in futsal.

Table 1. Ranking the Significance of Effective Factors for Success in Futsala

Table 2. Ranking the Significance of Anthropometric Factors for Success in Futsala

Considering the importance of skill-based factors to succeed in futsal (P = 0.001), It was found that dribbling ability was the most influential factor in talent identification in futsal.

Table 3. Ranking the Significance of Skill-Based Factors for Success in Futsala

As indicated in Table 4, no significant difference were found in physiological factors among Iranian futsal players (P = 0.386).

Table 4. Ranking the Significance of Physiological Factors for Success in Futsala

Table 5. Ranking the Significance of Physical and Motor Fitness for Success in Futsala

Table 7. Ranking the Significance of Psychological Factors in Talent Identification of Futsala

The main finding of this research was that psychological, physical fitness and skills variables were of utmost importance in talent identification in futsal. The results are not consistent with Ramos et al. who performed a study in futsal. One possible reason for the contradictory results could be attributed to different nature of these two sports (futsal versus football). Percent body fat was also likely to be a good performance predictor which had the highest rank in terms of effectiveness in anthropometry traits. Among the skill variables, dribble had the highest rank in predicting success in futsal. The results of this research are in agreement with the findings of Ramos’s and Galy research, which showed that the skill has a significant effect on the talent identification process (18, 20). As a result, the skills are potential indicators of futsal performance, because futsal players should have a high ability to play and move with the ball and be able to maintain and control it. On the other hand, no significant differences were found in the physiological indices for identifying the talented players and the physiological factors were approximately at the same level. In contrary to Castagna et al. (21), it was found that muscular endurance (as a variable of physical and motor fitness) had the highest rank in terms of effectiveness in futsal talent identification. It seems that population discrepancy may be a possible reason for the difference in the obtained results. The futsal player must have stable stamina at high speed, without rest, and be capable of changing speed and direction during a competition. Of sociological factors, fair play was the best indicator for success in futsal. On one side, the proximity of spectators to the playing field, On the other hand, lactic acid secretion in such a game with high intensity, makes the athletes nervous and increases the possibility of physical involvement in the players. Therefore, those who follow fair play during the competition are more likely to achieve success and this is a very important aspect of scientific and applied research in the field of talent identification. As noted, psychological factors had a significant role in talent identification, furthermore; anxiety control was the most effective factor in talent identification in futsal which is in line with Morris study (22). The ability to overcome stress and anxiety among elite athletes and also improving mental skills such as anxiety control play the key roles in success of futsal players. Futsal players are required to react, decide and pass promptly in both offensive and defensive tasks, so, their psychological characteristics, physical fitness and skills, are important factors that play a decisive role in reaching the peak sport performance and success in different competitions. Therefore, they should be taken into consideration in general and specific discriminative tests. Finally, it must be noted that longitudinal study is essential to determine whether the same determinant variables are important for outstanding performance throughout the process of talent identification.

Copyright © 2018, International Journal of Sport Studies for Health. This is an open-access article distributed under the terms of the Creative Commons Attribution-NonCommercial 4.0 International License (http://creativecommons.org/licenses/by-nc/4.0/) which permits copy and redistribute the material just in noncommercial usages, provided the original work is properly cited
download pdf 95.75 KB Get Permission (article level) Import into EndNote Import into BibTex
Number of Comments: 0