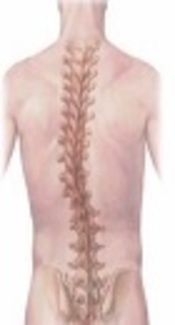 Postural deformities are disabling complications emerging at the early years of life. Therefore, the purpose of this research was to study the frequency of scoliosis condition in guidance schools of the city of Kashan and compare their anthropometric characteristics with the normal counterparts.

This was cross-sectional study including 604 females at guidance-school to determine the frequency of scoliosis in the city of Kashan. Adam's forward bend test was employed to identify the cases of disorder. Descriptive statistics and Independent t-test were used to analyze the data.

The result of examining 604 guidance school females showed that 108 (17.9%) female students had scoliosis deformity and 496 (82.1%) were normal. The result suggested that there was a significant difference between the height, weight, waist, waist/hip ratio (WHR) and Body Mass Index (BMI) of normal females compared to the scoliotic female student (P ≤ 0.05).

It was concluded that a considerable proportion of females were suffering from scoliosis deformity and their anthropometric factors were in poorer condition compared to normal individuals. Therefore, early identification of scoliosis may significantly improve the effectiveness of treatment and rehabilitation.

Normal human posture is an ideal condition for performing daily task regardless of age or gender. However, human posture may deviate from its normal course of development throughout life. Such developmental abnormalities do not occur abruptly under normal circumstance. They are usually the result of poor habits such as performing daily tasks in a poor posture conditions. Sitting improperly for prolonged duration, carrying back packs, briefcases or other objects for long periods of time or sitting in front of any displaying devices including computer, video game consoles or television may result in abnormal change of posture at any age. Faulty posture is common among children and adolescents with a wide spectrum of signs and causes. There are several studies reporting that common deformities may occur due to these reasons (1-4). In this regard, Eivazi et al. on a study of the prevalence of postural deformities reported that 24% of the children at the age 11 to 15 years were suffering from postural deviations (5). As the emergence of deformity at the very beginning of teenage years is not noticeable, only specialists and experts can detect disturbances with eye observations.

Many researchers have focused on the prevalence of postural deformities in young population including children and particularly school children (6, 7). Since the prevalence of such deformities depend on many factors, such as cultural habits and the environment, it is vital to carry out such research in different populations. As a result, this study was conducted to study the incidence of scoliosis and its relationship with anthropometric indices including height, weight, body mass index (BMI), waist/hip ratio (WHR) of female students in guidance-schools.

A cross-sectional study was performed on 604 school females (mean age of 13.4 ± 1.1 years old) to determine the frequency of scoliosis in guidance-school students of the city of Kashan, Iran. Adam's forward bend test was employed to identify the cases of disorder. Seca scale and inflexible tape were used to measure the weight and height of students respectively. All the assessments were performed in school gymnasium. Descriptive statistics and Independent t-test were used to analyze the data.

The results suggested that 17.9% of females were suffering from scoliosis while 82.1% were identified as having normal postures. As shown in table 1, a significant difference was found in the height, weight, waist, BMI, and WHR of normal compared to scoliosis cases (respectively, P = 0.023, P = 0.026, P = 0.011, P = 0.000, P = 0.022). The females with normal posture were significantly taller, lighter and had less waist circumference, BMI and WHR ratio than the scoliosis cases. However, there was no significant differences between the hip circumferences of normal females and scoliosis conditions (P = 0.23).

The study was designed to determine the frequency rate of scoliosis disorder in guidance school females. In addition, the other purpose of study was to compare the students that were identified as scoliotic with their counter parts who were identified as students with normal posture. Based on evidences, early detection of such a condition may help health authorities to apply non-invasive treatment such as wearing an orthosis. Adams was one of the pioneers in this issue that claimed that indirect means of identifying spinal deformity is possible by bending forward test that results in an increased existing deformity (8). In this regard, the scoliosis assessment has been widely applied in many research.

Cote et al. compared Adam's forward bend tests and Scoliometer and reported that Adams' test had more reliability for the assessment of thoracic curves (9). Since, Adam's forward bend test is more sensitive than the Scoliometer, the authors believe that it remains the best noninvasive clinical test to evaluate scoliosis. As suggested, the prevalence of scoliosis was 17.9 percent. The prevalence of scoliosis in a study conducted by Ciacciaa et al. was 24.3%, a higher rate of disorder reported than the present research and other researchers. On the contrary, Zhang et al reported a lower rate of disorder (10). The result of this study was not in agreement with the findings of other investigators who showed that the scoliotic case had lower BMI and weight than the normal individuals of the same age group (11, 12). In addition, it was indicated that the scoliotic cases had larger WHR. Having a larger waist size may be associated with larger BMI since waist area is where the visceral fat is deposited and results in larger weight and bigger BMI values. The discrepancy in finding different rate of prevalence may be attributed to the different methods of assessing postural deformities. However, regardless of the variations in the prevalence rate of postural deformities in school years, particularly during the guidance years when the child is at a critical period of postural development, the identification of the problem is important. By identifying the children at risk of becoming adults with faulty posture, appropriate measures may be taken to correct these problems.

Considering anthropometric factors such as body fat percentage, WHR and BMI in adolescent females is very important because it can cause abnormalities and skeletal disorders. On the other hand, the identification of acquired deformities at an early stage is critical since it makes it possible to take the proper measures to amend them more effectively.

The researcher wishes to express his appreciation to the full cooperation of all physical education teachers for completion of this research.

Copyright © 2018, International Journal of Sport Studies for Health. This is an open-access article distributed under the terms of the Creative Commons Attribution-NonCommercial 4.0 International License (http://creativecommons.org/licenses/by-nc/4.0/) which permits copy and redistribute the material just in noncommercial usages, provided the original work is properly cited
download pdf 95.25 KB Get Permission (article level) Import into EndNote Import into BibTex
Number of Comments: 0