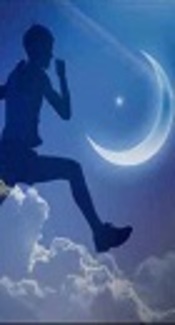 Evolution of Dietary Intake Between Before, During and After Ramadan Observance in Tunisian Physically Active Men: A Systematic Review

The present review was designed to systematize the literature on the evolution of dietary intake in Tunisian physically active subjects (i.e., physically active men and physical education students) between before, during and after Ramadan observance.

Two electronic databases, PubMed and Science direct, were searched using a comprehensive strategy. Studies published prior to August 2018 were included if they assessed dietary intake during Ramadan in Tunisian physically active subjects. A narrative synthesis of findings was conducted.

The literature does not support that Ramadan fasting had adverse effect on dietary intake.

Ramadan (i.e., 29 to 30 days) intermittent fasting (i.e., from dawn to sunset) from eating, drinking, smoking, and certain other behaviors is a fundamental rule of Islam (1). The daytime fasting depends on the climatic conditions as Ramadan advances ~11 days each year and could, therefore, occur in all season (2). Likewise, daytime fasting is strongly influenced by the geographical location of Muslims (3) and could be, in some countries, longer than 18 h in summer. In other countries located at the poles, the duration of the fast could be longer, which represents a real challenge for the fasters. In this context, a previous study reported an increase in the risk of accidents during Ramadan due to changes in the lifestyle (4). This implies some loss of cognitive and/or physical performances (5-7), both of which are important elements of performance. Therefore, a good diet is essential to be in good health.

Every day, Muslims take two main meals called Sahour and Iftar (8). The requirement to eat only in a short period of time leads to a disturbed circadian rhythm and to several changes in food intake timing (4). During Ramadan, changes are not only related to food intake timing, but the quantity and type of meals is different to that eaten in pre- or post-Ramadan (9, 10). In fact, a precious study showed that Ramadan is accompanied with higher lipid and protein intakes (11). Conversely, a decrease in carbohydrate consumption was observed during this month (11). Such dietary changes can in turn impact both the utilization and the storage of substrates, and entail to variations of body composition (1). Such a contradiction in the literature is probably due to different cultures in Islamic countries. In reality, variability of results depended on the region and conditions surrounding Ramadan fasting (12, 13). In this respect, many authors reported that the dietary intake during Ramadan remains substantially the same compared to the control period (i.e., before Ramadan) (14, 15). However, other studies have shown a decrease in daily calorie intake during Ramadan (16, 17). Amongst the changes affecting daily habits during Ramadan observance, we can distinctively observe either qualitatively or quantitatively dietetic-related changes.

Nowadays, no-previous study provided a systematic literature reviews on Ramadan intermittent fasting and subsequent effect on dietary intake in Tunisian physically active subjects. Systematic literature analysis provide a synthesis of the published results about a precise topic (e.g., dietary intake) from which conclusions could be drawn and decisions made by gathering data from different sources (18, 19). Therefore, the present review was designed to systematize the literature on the evolution of dietary intake in Tunisian physically active subjects between before, during and after Ramadan observance.

Samples were required to consist of Tunisian physically active men, with a mean participant age of 18 years or older.

Only articles, written in English or French, published or accepted for publication in peer-reviewed journals were considered. No restrictions in terms of study design, setting or time frame were considered.

Two electronic databases, PubMed and Science direct, were searched without any time limits or Filters. The last search was completed in August 25, 2018. The following combination of keywords was used when searching: [(Ramadan) OR (Ramadan fasting) OR (Ramadan observance) AND [(dietary intake)) OR (energy intake)] AND [Tunisian].

The method of studies selection is outlined in Figure 1. Duplicate studies were removed from the first search results using EndNote. 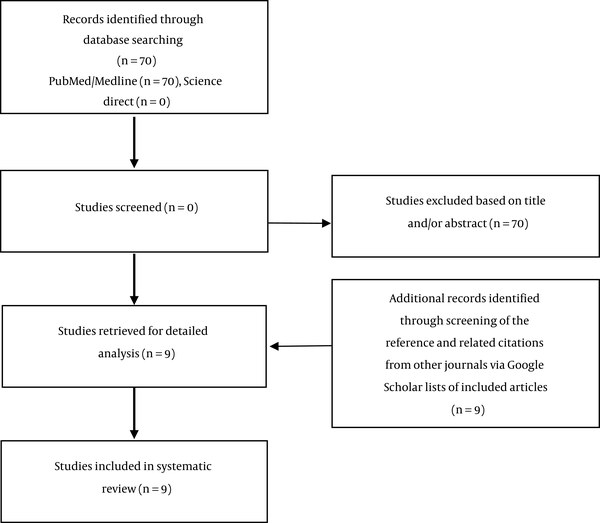 Nine studies were considered eligible for this systematic review.

Data of the nine selected studies are presented in Table 1 in order of publication date. The included studies showed a range of study designs: All of subjects participating in the studies are men. Mean age of physically active undertaking training during Ramadan observance varied from 18 to 27 years. The total population size included in this review was 93.

A total of nine studies, published between 2007 and 2018, describing the change of dietary intake between before and during Ramadan observance for Tunisian physically active subjects are shown in Table 1.

Three studies showed that carbohydrate intake decreased during Ramadan in comparison to control periods (21, 26, 27). However, six studies have reported the absence of change in carbohydrate intake between periods during and outside Ramadan (14, 22, 23, 25, 27, 28).

This is the first systematic review, to the best of our knowledge, to investigate the evolution of dietary intake between before, during and after Ramadan intermittent fasting in Tunisian physically active subjects. It is worth noting that during Ramadan, peoples are faced with a change in the eating habit including food intake schedule since they have the opportunity to eat only during the night.

However, this does not mean that this change in eating time will induce a decrease in food intake because usually peoples try to have the same number of usual meals (i.e., two or three meals). Broadly, the effects of Ramadan intermittent fasting on dietary intake may be summarized as neutral. To maintain energy balance, some sedentary people still eat enough; however, others consume less food to overcome any sleep difficulties at night or for the exploitation of the opportunity of fasting to lose weight (29, 30). Additionally, it seems that with the proper coaching encouragement, an athlete, during the feed period of the day, could consume enough food and fluid to overcome the effect of the daytime fasting. Nevertheless, these statements could not be generalized due to differences (i) in people’s desire to eat extra-food and/or (ii) in the training load during Ramadan.

In term of qualitative analysis of food, the composition of meals varies according to local eating habits (31). In the present review, six studies indicated that, in comparison to pre- and post-Ramadan, the daily energy intake was maintained during Ramadan (14, 21-25). However, other reports indicated, (i) in Saudi subjects, increases of total energy intake (32) or (ii) in Indian Muslims, decreases of daily energy intake (33). In the present systematic review, three studies showed a decrease of energy intake (26-28). Evidently, in Islamic countries, this contrariness is probably related to differences in food habits (11).

Concerning the fat intake, six studies revealed no-changes during Ramadan in comparison to control periods (14, 21-24, 28). On the other hand, one study reported that the fat intake was lower during Ramadan than control periods (26). However, two studies showed that the fat intake increased during the month of Ramadan (25, 27). An increase in lipid intake can lead to an increase in the consumption of saturated fatty acids, which could contribute to an increase of low density lipoprotein (LDL) cholesterol concentrations (34), and subsequently might lead to atherosclerosis.

Previous studies observed a high ingestion of protein during compared to before or after Ramadan (21, 23, 27). These findings could be explained by the large consumption of receipts based on meat, chicken and eggs during Ramadan (35). These results were in agreement with others studies which indicated the higher consumption of protein (32, 36). Indeed, most sports nutrition guidelines recommend an after training protein intake (37) could be better for recovery and adaptation process within the exercised muscles. Therefore, athletes who train during Ramadan are advised to change their training times to be in the early morning or the late the evening (38). On the contrary, one study reported a decrease of protein intake during Ramadan compared to control periods (26). However, the most of studies have noticed no-changes on the consumption of protein during Ramadan in comparison with control periods (14, 22-25, 28).

Concerning the portion of carbohydrate, some studies demonstrated that the diet is characterized by a decrease in carbohydrate intake during Ramadan (21, 26, 27). Changes in foods compositions during the fasting month indicate a slight reduction in the carbohydrate contribution to energy intake, which may cause a decrease in blood glucose concentration toward the end of the day (39). Furthermore, a low carbohydrate diet may reduce the buffering capacity of the blood during intense muscular contractions (40). Therefore, it is recommended to ingest a low glycemic index at Sahour meal to prolong the release of sugars into the blood (41). However, six studies have noticed no-changes on the diet of carbohydrate between periods during and outside Ramadan (14, 22-25, 28).

Total water intake decreased in some studies (21-24, 27) and did not change in Bouhlel et al. (28). The decrease in water intake may induce a state of dehydration. This latter may negatively affect cognitive and physical performances (9, 42, 43). Therefore, physically active subjects practicing physical activity during Ramadan are advised to increase water intake (600 mL/h of fluid) during the hours of darkness (43).

The literature does not support the association of Ramadan fasting with any changes of dietary intake in Tunisian physically active subjects.

Copyright © 2018, International Journal of Sport Studies for Health. This is an open-access article distributed under the terms of the Creative Commons Attribution-NonCommercial 4.0 International License (http://creativecommons.org/licenses/by-nc/4.0/) which permits copy and redistribute the material just in noncommercial usages, provided the original work is properly cited.
download pdf 117.49 KB Abstract XML Get Permission (article level) Import into EndNote Import into BibTex
Number of Comments: 0