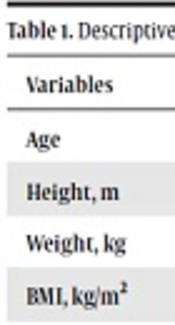 The purpose of this research was to study the effects of three months running exercise on these variables in untrained overweight middle-aged men.

Subjects were divided in groups of control (n = 10) and exercise (n = 11). In experimental group, subjects performed twelve weeks (three times per week) running exercise (intensity was between 75% to 85% of maximum heart rate). Blood samples were collected 24 hours before and 48 hours after exercises. Paired t-test was used for analysis of data in SPSS V. 15.

Statistical analysis showed significant reduction of RDW and BMI, also significant elevation of WBC, Plt and VO2max after three months exercise in the experimental group (P ≤ 0.05); no significant changes was observed in the control group (P > 0.05).

In general, three months running exercise may improve blood cells (leucocytes, erythrocytes and platelets) function that may lead to reduction of cardiovascular events risk in middle-aged men, but certainly more research is needed for precise conclusion.

WBC by release of oxidant products may induce proteolytic and oxidative damages leading to endothelium dysfunction and atheroma formation. When WBCs are activated, induce blockage of the vasculature, hypercoagulability, and infarct expansion (2, 3). In Kim et al. (3) study, WBC count was correlated positively with age, body mass index (BMI), blood sugar, low density lipoprotein (LDL), triglyceride, C-reactive protein (CRP), total cholesterol and hemoglobin A1c (HbA1c) and negatively with high density lipoprotein (HDL) levels. Also, WBCs induce hypertension through several mechanisms involving endothelial dysfunction due to inflammation and nitric oxide and prostacyclin reduction leading to disorder of antithrombotic, vasodilatory and antiatherogenic processes of the vessels. Vascular resistance due to leukocytosis and elevation of catecholamines levels are other mechanisms of hypertension that may be due do WBC elevation (4).

Sloan et al. (5) reported that high Plt is related to unfavorable lipid profile that is a risk factor for cardiovascular outcomes. Also, in another study elevated Plt was correlated with cardiovascular morbidity and mortality (6). RDW is a marker of variability in erythrocytes size and elevation of RDW leads to inflammatory processes of fatty streak formation. Low levels of vitamins B9 and B12 and iron are causes of RDW elevation (7). RDW, an anisocytosis index, is a novel risk factor of atherosclerosis. Proposed underlying machanisms for linkage of RDW to CVD are oxidative stress, dyslipidemia and inflammation. RDW is an inexpensive CVD laboratory index, therefore, lowering this factor is a desirable research purpose (8).

Sedentary lifestyle and low physical activity are a major risk factor for CVD morbidity and mortality. There are many data about mechanisms of reduction of CVD risk by exercise, including lipid profile improvement, blood pressure reduction, fat percent normalization, increased muscle mass and reduced inflammation (8). But there is not enough information about chronic effects of exercise on RDW, Plt and WBC in untrained men.

The purpose of this research was to study the effects of three months running exercise on these variables in untrained overweight middle-aged men.

Subjects of this study were 21 healthy untrained middle-aged men. They were overweight men, because their body mass index (BMI) was between 25 and 30. They randomly divided into groups of control (n = 10) and exercise (n = 11) (Table 1). A questionnaire was used for determination of levels of their physical activity. Also, a physician assessed their health status and physical activity readiness questionnaire (PARQ) measured their fitness to start trainings. Inclusion criteria of subjects included: no metabolic diseases and no usage of their drugs, no regular exercise, ability for start exercise protocol of this study.

Table 1. Descriptive Characteristics of Subjects and Differences Between Groups Before the Trainings

Study protocol included three months (three sessions per week) running exercise. Each session included warmed up (stretching, running and limbering up for 20 minutes), main part (30 minutes running with intensity of 75% - 85% of subject’s maximum heart rate) and cool down (walking and stretching exercises for 10 minutes). Polar watches were used for measurement of subject’s heart rate. Subjects were advised to avoid supplements during the exercises.

VO2max and body composition of the subjects were determined before and after trainings. Bruce protocol was used for measurement of VO2max on a treadmill (TechnoGym, S.P.A, Class: Run Race 1400HC, Italy). A body composition analyzer (InBody 720, English) was used for determination of subject’s body composition. Blood samples were obtained from left brachial vein in sedentary position 24h before and 48h after exercises. Blood factors (WBC, Plt and RDW) were determined using CBC-MAC cell counter (KX-21) on an auto analyzer system.

SPSS V. 15 was used for statistical analysis. For evaluation of data normality Kolmogorov-Smirnov test was used. In each group paired sample t-test was used for comparison of differences of pre-test and post-test levels of dependent variables.

Kolmogorov-Smirnov test showed that distribution of data in both groups were normal (P > 0.05). Significant reduction of RDW and BMI, also significant elevation of WBC, Plt and VO2max were observed in experimental group after trainings (P ≤ 0.05), no significant change of dependent variables was observed in the control group (P > 0.05) (Tables 2 and 3).

Fat percentage and socio-economic status are effective factors on WBC in response to long term aerobic exercise (9-11). Regular exercise through change in secretion of interleukins 1ra (IL1ra), 6 (IL6), 10 (IL10) and tumor necrosis factor alpha (TNFα) and affects number of leucocytes in the bloodstream (14). Hormonal factors (cortisol, catecholamines and chemotactic factors) may affect WBC changes during and after exercise. For example, lymphocyte changes are related to lymphatic circulation and activity of sympathetic nervous system (16). Changes of leptin and adiponectin are another effective factor on WBC (13).

Plt elevated significantly in this study that was in agreement with results of Sharma et al. (17). In their study 12 weeks (three times per week) treadmill exercise led to elevation of Plt in healthy young females. There was no study examining chronic effects of exercise on Plt in middle-aged men. Release of platelets from organs such as liver, bone marrow, spleen and lungs is a possible mechanism related to Plt elevation after exercise (17).

In experimental group, levels of RDW in experimental group increased significantly in this study. Alis et al. (18) reported elevation of RDW in healthy young males after a treadmill test. Lippi et al. (19) reported that RDW increased after a 21-km half marathon run in runners. Three weeks bicycle ergometer trainings led to reduction of RDW in patients with coronary atherosclerosis (7). In a research by Hammam et al. (8), RDW was associated negatively with physical activity and positively with systolic blood pressure in male adolescents.

In heart disease patients and healthy individuals, morbidity and mortality risk increase with RDW elevation. Elevation of RDW reflects RBC biology perturbation that may lead to heart attack (19). On the other hand, transport of oxygen in the blood is done by RBC and elevation of RDW may increase risk of incomplete oxygen transport or anemia. Also, elevated RDW may result from immature production of RBC in bone marrow (7). Of course, despite these probabilities, because the changes of RDW in this study were in normal range, we can not conclude that elevation of this variable after three months exercise in this research is clinically harmful, but more research is needed for accurate deduction.

In general, three months running exercise may improve blood cells (leucocytes, erythrocytes and platelets) function that may lead to reduction of cardiovascular events risk in middle-aged men, but certainly more research is needed for precise conclusion.

Copyright © 2019, International Journal of Sport Studies for Health. This is an open-access article distributed under the terms of the Creative Commons Attribution-NonCommercial 4.0 International License (http://creativecommons.org/licenses/by-nc/4.0/) which permits copy and redistribute the material just in noncommercial usages, provided the original work is properly cited.
download pdf 127.00 KB Get Permission (article level) Import into EndNote Import into BibTex
Number of Comments: 0