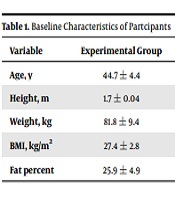 The purpose of this study was to evaluate the acute and chronic responses of these cardiovascular risk factors following physical activity in overweight healthy inactive middle-aged men.

The subjects included 21 healthy inactive men that were assigned into two groups of experimental (N = 11) and control (N = 10). The exercise protocol consisted of circuit resistance exercise (one session protocol) with intensity of 35% of 1RM; endurance training protocol lasting for 12 weeks (three sessions a week) and running exercise with intensity of 75% to 85% of maximum heart rate. Blood samplings were taken in pretest and posttest. The data was used using paired and independent samples t-test were used for statistical analysis of data.

Although it seems that atherogenic inflammatory processes are more sensitive to exercise than coagulatory processes in inactive middle-aged men, more researches are needed for crucial decisions.

Cardiovascular diseases, especially atherosclerosis has been found as major reasons for mortality worldwide for many years (1). Homocysteine, fibrinogen and C-reactive protein (CRP) are three important inflammatory molecules involved in atherosclerosis. High levels of these molecules enhance risk of atherosclerosis by mechanisms such as proliferation of smooth muscle cells, endothelium dysfunction, oxidative damage and elevation of adhesion molecules (2).

Although a great deal of research have investigated the effects of exercise programs on homocysteine, fibrinogen and CRP levels, few ones considered the distinguishing effects of acute and chronic exercises. Mogharnasi et al. (3) reported that both resistance and aerobic exercises reduced levels of vaspin and CRP. Laswati et al. (4) found no changes in CRP and fibrinogen following five weeks of low intensity resistance exercises.

Having considered the conflicts in research literature, the purpose of this study was to investigate the effect of one session and three months of aerobic programs on blood levels of homocysteine, fibrinogen and CRP in overweight inactive middle-aged men.

The subjects included 21 overweight healthy men (Table 1). Inclusion criteria included either no history of heart disease or any other metabolic and chronic disease, not taking medicine, lack of regular activity. The sample were divided into two groups, 11 were in the experimental group and 10 in the control group. Prior to the start of the protocol, electrocardiogram and blood pressure measurements were taken by physician.

Acute exercise program consisted of 10 resistance exercises (full body exercises). with intensity of 35% of One-repetition maximum (1RM). The subjects performed the exercises as many repetitions as for 20 seconds in each station. The recovery period was for 1 minute at the end of each station. The training program included 3 rounds of 10 station movements (5). Blood samples were collected from the left brachial vein before and immediately after exercise.

The endurance training protocol included 12 weeks (three sessions per week) of aerobic programs including 20 minutes of warm up (running and stretching and treadmill exercises); main program (running at a constant rate of 75% - 85% of maximum heart rate); and cooling down phase (stretching exercises for 10 minutes). The running time was gradually increased from the first session (15 minutes) to 30 minutes in the last session. The maximum heart rate was calculated from the formula 220 minus age. Blood samples were taken from the left arm of the venous vein of the subjects in sitting position and resting 24 hours before and 48 hours after exercise protocol. Biochemical variables were measured using ELISA method.

General characteristics of participants can be seen in Table 1. As shown, the data were normally distributed (recognized by Kolmogorov-Smirnov test).

aShows a significant change compared to the pre-test (P ≤ 0.05).

As suggested, there was a significant decrease in body mass index (BMI) following three months of aerobic exercises (P ≤ 0.05). However, fat percentage were not significantly changed (P > 0.05). As shown in Table 3, all variable except fibrinogen were significantly improved in experimental group after aerobic protocol while no significant change was found for control group (Table 3).

ashows a significant change compared to the pre-test (P ≤ 0.05).

The results revealed that a bout of one-day resistance training session increased homocysteine in overweight non-active men. In general, its well documented that homocysteine usually increases after a session of physical activity, regardless of type, intensity and volume of exercise. Increase of free amino acid in plasma and muscle after exercise is related to the reduction of glycogen stores and increasing the need for vitamins B6 and B9 for catabolism and elimination of homocysteine. Exercise metabolism increases several methylated compounds such as DNA, epinephrine, acetylcholine, carnitine and creatine, which are involved with homocysteine in trans-methylation reactions (6). In addition, since the intense exercise is dependent on the phosphagen system, the production of creatine in the body would increase homocysteine (7).

As shown, circuit resistance exercise session increases the serum CRP levels of middle-aged men. In this regard, Alfred et al. (8) reported that a Bruce treadmill test increase CRP and malondialdehyde in young male students. It was shown in a study that CRP levels were significantly increased after marathon and triple tournaments. The mechanism of CRP response following exercise is not well understood yet. It should be noted that Interleukin-1 (IL1), IL6, and tumor necrosis factor alpha (TNFα) are elevated after an intensive physical activity session, which stimulate CRP synthesis (9).

In addition, no significant change was found in fibrinogen following performance of circuit resistance exercise session. In consistent with this result, it was shown in a study that Bruce Protocol had no significant effect on fibrinogen levels in young female athletes (10). In the current research, the circuit resistance training weren’t capable of providing necessary requirements for the synthesis and release of liver fibrinogen, then, changes in blood volume were not significant enough to affect fibrinogen levels (10).

In this study, the amounts of CRP in the experimental group were decreased significantly following the aerobic trainings. Zarzour et al. (13) suggested that the more BMI is, the higher amount of CRP is found. One of the factors leading to chronic inflammation is obesity, which increases the number of inflammatory proteins such as TNFα, IL6 and their receptors, which stimulate the production of CRP in the liver. Therefore, decreasing fat percentage in obese people caused by exercise can be effective in reducing CRP levels (14).

Based on our results, the fibrinogen levels did not significantly change after three months of aerobic exercise in middle-aged men. Fibrinogen is directly related to stress, obesity and LDL and has an inverse relationship with HDL. Therefore, any intervention that increases HDL and reduce LDL, stress and fat percentage, can result in fibrinogen reduction. Regular aerobic exercises would reduce the concentration of fibrinogen in the blood by decreasing cytochrome stimulation, decreasing the cytokines, especially IL-6, due to reduced fat tissue, increased muscle blood flow, and increased total blood volume (15-18).

Generally, the findings demonstrated that, a resistance exercise session increases homocysteine and CRP in inactive middle-aged men. Additionally, three-month aerobic training reduced these risk factors, and both types of exercises had no significant effects on fibrinogen levels. Therefore, inflammatory mechanisms are more responsive to coagulation mechanisms than exercise in active middle-aged men, and they can prevent the occurrence of inflammatory atherogenic processes through regular physical exercises, especially aerobic exercises.

Copyright © 2019, International Journal of Sport Studies for Health. This is an open-access article distributed under the terms of the Creative Commons Attribution-NonCommercial 4.0 International License (http://creativecommons.org/licenses/by-nc/4.0/) which permits copy and redistribute the material just in noncommercial usages, provided the original work is properly cited.
download pdf 120.55 KB Get Permission (article level) Import into EndNote Import into BibTex
Number of Comments: 0