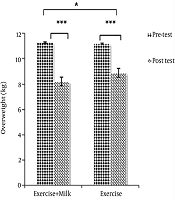 Obesity is recognized as one of the important global health concerns, resulting in diseases, such as diabetes, hypertension, and cancer (1, 2). Over the past two decades, the prevalence of obesity has increased throughout the world, reaching its highest level in the United States (3). In Iran, the prevalence of obesity and overweight has been estimated at 3.61% and 8.32%, respectively (4). Generally, obesity and overweight are major contributors to the development of chronic diseases, such as cardiovascular diseases, type II diabetes, insomnia, and postural disorders, and may result from increased energy intake and decreased physical activity (1, 2, 4, 5).

Sport physiologists and nutritionists describe two major factors associated with weight loss, including workout routine and diet plan. It has been well established that changes in the composition of dietary macronutrients can be effective in weight loss (6). In fact, increased protein density in the diet boosts the feeling of fullness and consequently reduces the intake of energy in individuals (5). On the other hand, muscle is one of the important tissues in the body's motor system. Muscles may lose their strength due to different factors and diseases. In most people, muscle atrophy occurs due to inadequate muscle use. In addition, people with inadequate mobility and limited muscular contraction often experience reduced muscle size and weakness (7). Nevertheless, this type of atrophy can be eliminated by exercise and proper nutrition.

Evidence suggests that morphological and functional adaptation of athletes and non-athletes to resistance exercises is highly desirable (8). Multiple studies have reported that one year of resistance exercise can maintain and increase lean body mass (8). Essentially, resistance exercises have anabolic features and stimulate the muscle protein synthesis pathway. Moreover, consumption of protein-rich foods can prevent muscle atrophy or decelerate the progression of atrophy. More favorable results can be obtained if resistance training is accompanied by the consumption of protein-rich foods, which can contribute to muscle synthesis (9). Studies show that protein-rich diets increase fat loss more than low-protein diets (9), since muscle gain leads to an increase in metabolism and fat burning capacity of the body. On the other hand, different types of protein may affect the outcomes of resistance training due to their variable rates of absorption, differences in amino acid profiles, unique hormone responses, and effects on antioxidant defense (10).

Our hypothesis in this study was that milk intake immediately and one hour after exercise can improve muscle gain, as the body is possibly at its most favorable state in terms of anabolic responses in this period (11). Limited studies have been carried out on the effects of combined weight loss exercises or resistance training associated with protein intake on weight control, muscle growth, and body composition, and the reported results are contradictory (12). In addition, only protein supplements have been examined in studies performed in Iran and other countries. Since the annual consumption of milk in the Iranian population, especially students, is very low, and the general viewpoint about the use of protein supplements and resistance training is negative (due to poor body image), in this study, we used milk in addition to aerobic and resistance training to evaluate its possible effects on changes in the body composition.

In this semi-experimental study, the statistical population consisted of the students of Imam Khomeini International University. For selecting the study sample, flyers were distributed in the university, and overweight students were invited to the study. After completing a questionnaire on the history of diseases and drug consumption, physical activity, and history of supplementation use, a total of 40 eligible students were selected and randomly divided into two groups: aerobic-resistance training + milk consumption and aerobic-resistance training. It should be noted that thirty students remained in the study by the end of training.

The students studied and signed the written consent forms and were familiarized with the study protocol and accurate exercise performance in one session. In the aerobic-resistance training + milk group, the students used milk immediately and one hour after aerobic-resistance training. The exercise protocol included six weeks of aerobic and resistance training (using free weights), three days a week. For designing the resistance training program, the one-repetition maximum (1RM) test was performed for all movements in one session (Table 1) to control the intensity of workouts accordingly during the training sessions (Equation 1). In addition, a Polar heart rate monitoring device was used to control the intensity of aerobic workouts, and maximum heart rate was measured based on the Karvonen formula.

Table 1. The Exercise Protocol of the Study
Equation 1.

Equation 1 represents the 1 RM formula for estimating the maximum power in each training set.

The students were asked not to eat any food for two hours before training. The study procedure is presented in Table 1. The students used 200 mL of milk immediately after the exercise and 200 mL one hour after the exercise (735 kJ, 17.5 g protein, 22.7 g carbohydrate, and 0.4 g fat). The body composition was evaluated using the mass-in-body analyzer (Korea).

In total, 24 out of 30 (80%) students were living in dormitories and used self-catering services of the university; the rest lived outside the dormitories. Although most of the students had similar living conditions and nutrition, the self-report method was used for further control to describe the nutritional habits of the subjects. The students were instructed to measure their calorie intake. The HyperDiet program was also used for calorie intake measurements and control of the students’ self-reports. For data analysis, independent and paired t-tests were performed.

Table 2. The Demographic Characteristics of the Students

Table 3. Comparison of Calorie Intake and Dietary Composition in the Two Groups Based on Independent t-Test As presented in Figure 2, paired t-test showed that muscle analysis in both groups was significantly improved in the posttest (P = 0.001). Independent t-test also showed that the group consuming milk after exercise had more muscle mass than the aerobic-resistance training group (P = 0.03). The aim of this study was to investigate the effects of milk consumption following aerobic-resistance training on the weight loss of female students. The results showed that after six weeks of resistance-aerobic training, body composition significantly changed in both groups (reduced body fat percentage, increased muscle gain, and reduce fat mass).

In addition, milk consumption along with exercise significantly decreased body composition indicators, including body fat percentage, waist-to-hip ratio, and total body fat, and increased muscle weight gain and metabolism. In the literature, milk has been found to be useful in the synthesis of proteins and glycogen, as the body returns to its primary state after exercise (13). Therefore, the important role of proteins, such as milk which has the richest amino acids for muscle synthesis (9), is established.

In addition, one of the interesting findings of this study is the significant difference in the body fat percentage, waist-to-hip ratio, and total body fat of the two groups, while there was no significant difference in the BMI and weight of the two groups. As indicated in Table 3, fat mass reduced and muscle weight increased significantly in the group consuming milk. This highlights the importance of measuring body composition indicators (fat and muscle mass) instead of raw weight in the improvement of health indicators.

One of the reasons for the reduced fat burning capacity of the body in the exercise + milk group might be the increased muscle mass, as it improves metabolism, fat burning capacity, and energy requirements of the body during exercise. Fujita et al. (2007) showed that protein consumption after a resistance training session increased the use of amino acids for protein production, which could lead to a systemic increase in insulin and further muscle synthesis (14). The results of this study regarding the increased muscle strength following exercise and protein consumption are consistent with the results reported by Pennings et al. (2012), who showed that use of protein substances, such as albumin, pinto beans, milk, or cheese, could improve muscle synthesis after resistance exercises (15).

An important question in the use of protein substances during training is the proper time for the use of proteins during training intervals to maximize proper responses to exercise adaptations (16). This can have positive outcomes, such as muscle repair and strengthening due to muscle hypertrophy, which ultimately leads to improved weight loss (17). As stated earlier, the timing of food intake has greater effects on the body composition, compared to the type of dietary supplementation (18); this finding should be considered by health policymakers.

Copyright © 2019, International Journal of Sport Studies for Health. This is an open-access article distributed under the terms of the Creative Commons Attribution-NonCommercial 4.0 International License (http://creativecommons.org/licenses/by-nc/4.0/) which permits copy and redistribute the material just in noncommercial usages, provided the original work is properly cited.
download pdf 237.74 KB Get Permission (article level) Import into EndNote Import into BibTex
Number of Comments: 0