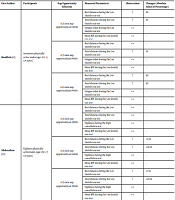 Nap Opportunity As a Strategy to Improve Short-Term Repetitive Maximal Performance During the 5-m Shuttle Run Test: A Brief Review

Sleep is very important for the recovery process and regeneration (1). This night period of rest could be disturbed due to many factors such as: late night training or competition (2), sleep deprivation night (3). Therefore, for a good recovery during the day, many people perform a short afternoon nap. Indeed, a propensity to sleep after lunch (i.e., the post lunch dip) has been reported and was related to a reduction in central temperature and vigilance and an increase in the sensation of sleep (4).

On the other hand, some physically active people and/or athletes perform intensive repetitive efforts during their training routines. One of the most utilized exercises during testing or training for athletes in many sports activities is the 5-m shuttle run test (5-mSRT). Indeed, this exercise is widely utilized for the development of both aerobic and anaerobic capacities as it consist to perform six repetitions of 30-seconds shuttle sprints with a recovery period of 35-seconds (9).

The present study aimed to review the studies that have investigated the effect of an afternoon nap opportunity on physical performance during the 5-mSRT.

The search of studies was performed on two electronic databases (PubMed/MEDLINE and Web of Science) in August 27, 2019 using the combination of the following keywords: [(Nap)] AND [(shuttle run performance) OR (5-m shuttle run test)]. The included studies are written in English language and are published in peer-reviewed journals.

The present study search resulted in two studies examining the effect of the nap opportunity on the 5-m shuttle run test (Table 1). The results of these two studies are presented in the Table 1. These studies reported clearly that a nap opportunity has a positive effect on the 5mSRT performance (10, 11).

Table 1. The Effect of a Nap Opportunity (i.e., Compared to a Non-Nap Opportunity) on Performance During the 5-m Shuttle Run Test, Vigilance and the Perception of the Task (RPE)a

The beneficial effect of the nap opportunity has been confirmed on cognitive (5), mood states (5) and psychomotor (12) and physical performance (7, 8). During a repeated sprint test, Hammouda et al. (7) showed that a 20-minutes and a 90-minutes enhanced the maximal and the mean power after one night of partial sleep loss. After a normal sleep night, Daaloul et al. (8) reported that cognitive performance (i.e., simple reaction time, lower reaction time and mental rotation) was better after a 30-minutes nap opportunity compared to a no-nap condition. Also, after a normal sleep night, Hsouna et al. (13) reported that physical performance during the five jump test and attention during the digit cancellation test improved after a nap opportunity ≥ 35 minutes. Nowadays, no-firm conclusion existed in the literature concerning the mechanisms related to the beneficial effect of a nap opportunity on physical and cognitive performance. However, some studies indicated a causal link between both cognitive and physical performance and the sensation of sleepiness and fatigue. In this context, the beneficial effect of the nap opportunity could be related to a reduction in the sleepiness sensation (6) and an improvement of alertness and the estimation of fatigue (5).

The reported positive effects of the nap opportunity on short-term repetitive maximal performance depends on the duration (11) and the time-of-day (10) of this resting period.

Copyright © 2019, International Journal of Sport Studies for Health. This is an open-access article distributed under the terms of the Creative Commons Attribution-NonCommercial 4.0 International License (http://creativecommons.org/licenses/by-nc/4.0/) which permits copy and redistribute the material just in noncommercial usages, provided the original work is properly cited.
download pdf 101.42 KB Get Permission (article level) Import into EndNote Import into BibTex
Number of Comments: 0