Anxiety Disorders in Children with Functional Constipation: A Case-Control Study 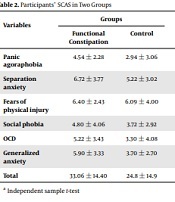 This case-control study was conducted on 200 children (100 cases with functional constipation and 100 children without functional constipation) aged 15 - 8 years. The participants’ age and gender were evaluated and compared in two groups. Moreover, the Spence Children Anxiety Scale (SCAS) (parent form) for children was completed. Finally, the collected data were analyzed using SPSS software version 24.

Functional constipation (FC), as a prevalent condition in children, is estimated to have a 9.5% prevalence rate worldwide (1). A clinical-based approach, which is currently based on the pediatric diagnostic Rome IV criteria, is used to diagnose FC in children (2). The etiology and pathophysiology of constipation in pediatrics is multifactorial, and many factors, including low-socioeconomic status, genetic predisposition, immobility, inadequate fluid, and daily fiber intake, may affect this condition (3-5). However, there are still many unknown risk factors. The most common and well-known etiological factor in children is withholding behavior, which usually happens after experiencing the frightening or painful defecation of stools, which may lead to and exacerbated by an anxiety disorder (1). This behavior is associated with incomplete feces defecation, fecal impaction, dyssynergic evacuation, decreased rectal sensation, and overflow fecal incontinence (2, 6).

FC puts a heavy burden on children and their parents (7), and this condition is associated with a decrease in quality of life, decreased academic performance, and psychological disorders including depression, aggression, emotional reactivity, and anxiety (7, 8). Moreover, FC is more common in children with psychological problems such as autism spectrum disorders (ASDs), attention deficit hyperactivity disorder (ADHD), and different types of anxiety (2, 9, 10). Another critical disease in such children is less frequent urinary tract dysfunctional disorders such as enuresis, which can simultaneously be observed with FC, thereby arousing further anxiety in children and parents (11, 12). In these cases, where psychological problem is associated with FC, and there is two-way communication between the two variables, as stress can also affect FC, symptoms may persist by adulthood. Although such cases have received adequate laxative treatment, no improvement in the cases is observed (13).

The present study aimed to evaluate and compare anxiety disorders in children with and without FC.

This case-control study was conducted on patients with FC in Amir-Kabir hospital.

The study population encompassed patients with FC in the case group, and children without FC in the control group. The samples were selected using the nonrandom convenience sampling method. In the case of selection, the matching method was also considered as such the children in the two groups were homogenous in terms of age and gender. One hundred seventy-two cases were included in the case group, and there were 145 children in the control group. Considering inclusion and exclusion criteria and according to the sample size, 100 children with FC and 100 children without FC participated in this study.

The control group was selected from children without FC, who referred to the pediatric clinic of Amir Kabir Hospital on an outpatient basis, and the case group included children who were diagnosed with FC considering their medical history and medical records, and a pediatric gastroenterologist approved the diagnosis.

Children aged 8 - 15 years, a history of FC with confirmed diagnosis, and informed consent from the children’s parents.

- Positive history of chronic and prevalent psychiatric disorders such as depression, anxiety disorders (for the case group before constipation), bipolar disorder, ADHD, and others,

- Mental retardation (having an intelligence quotient (I.Q) < 70 based on previous diagnosis documents or an I.Q test if needed),

- Positive history of chronic medical diseases such as epilepsy, diabetes, congenital syndromes, immunodeficiency, malignancies, and others,

- History of major psychiatric illnesses in the grade 1 of families,

- History of developmental disorders in infancy and childhood,

- A history of parents’ death or separation.

According to the aforementioned criteria, 200 children were selected, compared, and analyzed.

FC in children was defined and confirmed as follows (14):

- Bowel movements two or fewer times a week or defeating complicated and bulky stools for at least two weeks as constipation definition.

- Presence of the following in the history and clinical examination to diagnose FC: withholding behavior with a certain position, increased stool diameter and painful bowel defecation, overflow incontinency, and rectal ampulla containing stools.

- Rejection of organic causes of constipation and other differential diagnoses (to confirm FC), including congenital anomalies of the gastrointestinal tract such as anorectal anomalies, Hirschsprung's disease, hypothyroidism, hypocalcemia, poisoning, and celiac disease. It should be noted that FC was diagnosed and confirmed according to pediatric gastroenterologist diagnosis.

After completing the questionnaires and identifying children with anxiety disorders using SCAS, they were referred to the psychiatrist to confirm their diagnosis based on the DSM-IV-TR anxiety diagnostic criteria. Finally, anxiety and the subcategories of this disorder were compared in the two groups.

The collected data were analyzed by SPSS software version 24 at a 95% confidence level, and descriptive statistical methods were used to determine the frequency of the research variables. Further, Student’s t-test was used to analyze the quantitative and qualitative variables. Spearman’s test was also used to examine the correlation between constipation duration and anxiety disorders. In this study, P < 0.05 was considered as the significance level.

Table 1. Participants’ Age and Gender in Two Groups a

The findings revealed that anxiety was higher in children with FC than children without FC as the control group. Of the concerned indices, separation anxiety, generalized anxiety, and OCD were significantly different in the two groups, and they were significantly higher in the case group than the control group. Hosseinzadeh et al. reported that depression and anxiety had a prevalence rate of 23.5% and 34.6% in chronic constipation, based upon screening tools, MINI, and the HADS questionnaire (15); however, the methods in this study were different, thereby justifying the differences in the findings.

Among studies examining psychological conditions in gastrointestinal disorder cases, Nehra et al. (11) retrospectively reviewed the patients with evacuation disorders, who had referred for biofeedback retraining to a tertiary referral center. They investigated their cases for psychological disorders considering the DSM-IV criteria and observed that patients with evacuation disorder and constipation had a 65% psychological impairment, and the most common disorders were anxiety and depression (10). Mason et al. investigated the relationships between psychological morbidity and idiopathic constipation. They evaluated psychological disorders using the General Health Questionnaire (GHQ-28) and documented that constipated cases had significantly higher levels of anxiety (P < 0.022) compared to children without FC as the control group (16). In another study, Rezakhaniha et al. found out that the flaccid measurement could be as helpful as stretched measurement if it is done from pubic bone to tip of glans (17). Furthermore, Rezakhaniha et al. mentioned that penile length was positively correlated with height and testosterone but not with weight and estradiol in non-obese and obese children (18). These two studies addressed anthropometric data, which are different from the present study.

In three studies, Taylor et al. (1), Hutson et al. (19), and van den Heuvel et al. (20) showed that FC in children could lead to psychological disorders, low self-esteem, academic failure, and behavioral disorders. Yacob et al. also observed that children with depression and anxiety are at higher risk of FC (21). Waters et al. evaluated FC in children with anxiety disorders. They showed that FC and irritable bowel syndrome with a prevalence rate of 40.7%, were more frequent in children with anxiety, than the control group with the prevalence rate of 5.9% (22). In addition to anxiety, some authors have reported a significant association between other psychiatric disorders and FC in children. In this regard, Peeters et al. (9) and Mckeown et al. (23) observed a significant relationship between FC and autism and ADHD in children, respectively.

Regarding recent psychodynamic models, there are three different ways to express anxiety (11): cognitive/perceptual distortions, smooth muscles, and striated muscles. Dysfunctions of smooth muscle-like constipation, diarrhea, shortness of breath, IBS, and so on may be related to anxiety that is so strong that it inhibits the function of the striated muscles. Accordingly, a patient with smooth muscle disorders in response to anxiety-provoking situations shows more problems with adapting to stressful situations as such, helping patients with constipation to express their emotions and anxiety and eliminate their stressful condition and anxiety using psychotherapeutic methods could reduce constipation symptoms. Given the lack of studies on anxiety disorders in children with FC, further studies in this field are recommended. However, based on the findings of the present study, further studies on children with FC (especially long-term cases of this disorder) is recommended. In this study, the mutual communication of FC and anxiety was similar to those reported in previous studies.

Our study showed an association between anxiety disorders and FC. Accordingly, anxiety was higher in children with FC than children without FC as the control group. Of these indices, separation anxiety, general anxiety, and OCD were significantly different in the two groups.