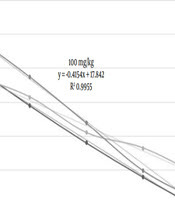 To compare the effects of a single dose of clofibrate on the serum bilirubin level in full-term non-hemolytic icteric neonates when it is administered in addition to phototherapy, and to evaluate its possible side effects.

In a randomized-controlled clinical trial in 2016, 90 term icteric neonates were divided into groups of 30. One group took a single dose of 50 mg/kg while another group took a single dose of 100 mg/kg of clofibrate. All neonates were under phototherapy and were compared to a control group who took a placebo. Serum bilirubin levels were measured at admission and then after 6, 12, 24, and 48 hours of treatment. Clofibrate’s side effects were assessed by measuring hepatic enzymes (AST/ALT) and lipid profiles (TG/Chol) at admission and after 48 hours.

A single dose of 100 (not 50) mg/kg clofibrate better decreased the serum bilirubin.

Icterus in neonates is a common and unavoidable physiologic phenomenon that happens in 60% of term neonates within the first week of the neonate’s life (1).

However, icterus is considered pathologic in any of these cases: if it occurs within the first 24 hours after birth, the total serum bilirubin level rises by more than 5 mg/dL per day or if higher than 17 mg/dL, or the signs and symptoms suggestive of serious illness exist (2).

Increase in serum indirect bilirubin level and its accumulation inside the brain tissue causes damage to this tissue, especially in the basal ganglia, and as a result, kernicterus may occur in the neonate. This causes an increase in neonatal mortality rate or may cause the long-term neurological effects like cerebral palsy or neurological hearing loss in surviving neonates (3, 4).

To prevent the negative health effects of hyperbilirubinemia, the icteric neonates should receive medical treatments to avoid the serum indirect bilirubin levels to reach neuro-toxic levels. So far, the most common treatment method to reduce the level of serum indirect bilirubin has been phototherapy (5, 6). However, the need for hospitalization of the neonate and recurrent blood draw, and the need for the presence of mothers alongside their neonates in the hospital, increase the chances of psychological problems, depression, postpartum pain among mothers, and financial burden on families. Additionally, the needs for hospital equipment and skilled nurses increase when the treatment takes longer than expected (5-7).

Studies show that in addition to phototherapy, other therapeutic methods have been applied, including immunoglobin-therapy, blood exchange, albumin injection, and administration of clofibrate (8, 9). More recent therapies include administration of bilirubin chelators. Metalloporphyrins act as competitive inhibitor of bilirubin production (10). However, they are expensive and still not easily available worldwide. Additionally, zinc chelators need to be injected, which causes stress for the patients and families (8, 9). Clofibrate is low cost and is administered orally in a single dose, which brings convenience.

Due to the side effects of phototherapy, it is important to reduce the duration of phototherapy treatment (11). Previous researches have compared the effects of two different doses (50 and 100 mg/kg) of clofibrate with placebo (12-15).

Since there is still no agreement in scientific references on the role of clofibrate in treating jaundice, this present study investigated the effects of clofibrate on reducing the serum bilirubin level in neonates who were under phototherapy. The novelty of this study is that it further evaluated the possible short-term side effects of clofibrate, including its effects on lipid profile and hepatic function.

In this randomized-controlled clinical trial, during one year in 2016, 90 term icteric neonates (gestational age or GA more than 38 weeks) who were within 14 days of age and were breast-fed were matched (as much as possible) for age (based on birth date), weight, gender, and GA, and each newborn took the assignment of one of the three groups. Newborns all had high serum total bilirubin levels (up to 20 mg/dL) diagnosed based on their age, GA, and weight, and according to the Bhutani Nomogram table (16), they were admitted to the neonate department of either Loghman-Hakim or Taleghani hospitals in Tehran, Iran. Neonates with any hemolytic disease (Rh or ABO incompatibility and a positive Coombs test), congenital anomaly, infection, dehydration, G6PD deficiency, anemia, severe asphyxia, conjugated bilirubin more than 1.5 mg/dL, or exceeding 15% of total serum bilirubin were excluded. The treatment was performed based on the criteria for serum total bilirubin levels defined by the Bhutani Nomogram table (16).

Serum bilirubin levels were measured at admission and then after 6, 12, 24, and 48 hours. Clofibrate’s side effects were assessed among the three groups by measuring hepatic enzymes aspartate transaminase, alanine transaminase (AST/ALT), and lipid profile (triglyceride and cholesterol) on the first day of admission and 48 hours after.

Equation 1 determined the sample size where the confidence level was set at 95%, the margin of error (E) was 8%, and standard deviation (σ) was 1. After recruiting 164 newborns, due to lost to follow-up or identifying exclusion criteria, only 90 newborns stayed in the study.

When a newborn was randomly assigned to one of the trial groups, the next matching two patients were each randomly assigned to one of the remained two groups using a random numbers table. The study was a double blinded randomized clinical trial (only the research team knew which patient received what dose/placebo to minimize bias). The study evaluated whether clofibrate, and with which dose, affected the decrease in the newborn’s serum bilirubin levels, which was measured every 6 hours.

For analyzing quantitative data, SPSS software (version 23, IBM Corporation) was used. Student’s t-tests and ANOVA were used to test the differences between three participant groups’ means for continuous data. Pearson correlation was used to identify the associations between continuous parameters and chi-squared was used for categorical parameters. Student’s t-tests were used to compare the slopes of regression lines (17). Participants with missing data were eliminated from the statistical analysis. Significance was defined at P < 0.05.

The study was approved by the Research Ethics Committee of the Clinical Research and Development Unit of Loghman-Hakim Hospital and financial support was provided by the Shahid Beheshti University of Medical Sciences, Tehran, Iran. Informed consents were obtained from the parents of the neonates (SBMU.RETECH.1396.77, IRCT 32992). This study has been carried out in accordance with the code of ethics of the World Medical Association (Declaration of Helsinki) for experiments involving humans. Figure 1. Effects of a single oral dose of 100 mg/kg and 50 mg/kg of clofibrate as well as no clofibrate on neonates’ serum total bilirubin levels when administered in addition to phototherapy. Since the R-squared values are close to 100%, the linear models fit our data well (n = 90, including 30 neonates in each group).
Table 1. Averages for Total Bilirubin, Triglyceride, Cholesterol, Aspartate Transaminase (AST), and Alanine Transaminase (ALT) Measured at Different Time Points Before and After a Single Oral Dose of Clofibrate in Neonates’ Serum (N = 90, 30 Patients in Each Group)a

Although comparing the slopes for the amount of reduction in the serum bilirubin levels did not show any statistically significant differences, (for control and 50 mg/kg groups P = 0.654, for control and 100 mg/kg groups P = 0.646, and for groups of 50 mg/kg and 100 mg/kg P = 0.905), the repeated tests that compared the slopes of regression lines showed significance as follows.

Table 2. Number and Percent of Newborns with Changes in Measurements After 48 Hours of Treatment (N = 90, 30 Patients in Each Group)a

Although for the purpose of this study all patients were hospitalized for at least 48 hours in order to make collecting blood samples possible, the actual time-period to achieve the treatment’s goal was shorter for most newborns. The numbers for newborns who achieved serum bilirubin levels of 10 mg/dL or lower within 24 hours are presented here, however, newborns were further evaluated if they needed to be discharged based on their birth weight and age; (research’s funding paid for all the hospitalization costs).

Neonate’s age and not birth weight or gender correlated with the amount of reduction in serum bilirubin level after 48 hours.

None of the patients needed exchange transfusion and no patient retuned to our center due to gastrointestinal or any other complications during following months after our trial.

Clofibrate is a lipid-lowering agent used for controlling the high cholesterol and triglyceride levels in the blood. To promote the conversion of VLDL to LDL, clofibrate increases lipoprotein lipase activity, and as a result, reduces the level of VLDL; it may increase the level of HDL as well (18). Fibrates also may increase bilirubin conjugation and excretion through induction of glucuronyl transferase activity (19). Although the possible side effects of clofibrate (like gastrointestinal effects in adults) were not seen in neonates who took a single dose, due to lack of enough research in this regard, this study aimed to identify the possible side effects of clofibrate in neonates in addition to comparing the benefits of two different doses of clofibrate in treating neonates with indirect hyperbilirubinemia.

A study published in 2012 in the Journal of Indian Pediatrics showed that clofibrate had reduced the need for/or duration of phototherapy and had reduced the serum total bilirubin levels (20). This finding may help in reducing the duration and cost of hospitalization. Clofibrate may offer short-term benefits in full-term newborns who do not have hemolytic diseases, however, a long-term follow up is needed to evaluate its safety and long-term effects. Currently, there is no evidence to show that clofibrate can change the possibility of death, kernicterus (21), or long-term neuronal growth defect.

In another study in 2013 published in the Excli Journal, 90 newborns were divided into three groups. Two groups received clofibrate in addition to phototherapy: one group received 25 mg/kg and the second group received 50 mg/kg. The third group was counted as the control group and received only phototherapy. In groups treated by clofibrate, the serum total bilirubin level decreased, however, there was no statistically significant difference between groups who took two different clofibrate doses. In groups who took clofibrate, the duration of phototherapy and hospitalization reduced compared to the control group who was only under phototherapy (22).

A study published in 2015 in the Clinical Neonatology Journal included 60 neonates who were divided into two groups. One group who was counted as the control group only received phototherapy and the second group received clofibrate (10 mg/kg single dose), in addition to phototherapy (1). Their results showed that the group that took clofibrate had more reduction in the level of serum total bilirubin, and additionally, shorter duration of phototherapy and hospitalization (1).

Another study in 2012 published in the Iranian Red Crescent Medical Journal showed that a single dose of 100 mg/kg clofibrate in full-term neonates who were breastfed better reduced the level of serum bilirubin compared to the control group (15).

We measured serum aminotransferases AST and ALT to evaluate if hepatocyte damage had occurred possibly due to side effects of administered clofibrate and we found no change in those enzymes compared to the control group (23).

Due to the fact that in other studies both single doses of either 50 or 100 mg/kg of clofibrate have shown bilirubin-reducing effects, and since our data did not show that 50 mg/kg dose can reduce serum bilirubin better compared to the control group, further clinical trials are recommended (14, 15, 24).

Since newborns were randomly assigned to treatments and sample size was small, the average value for serum bilirubin at the admission time happened to be higher in the group who received 100 mg/kg of clofibrate compared to the other two groups. Larger sample size may minimize differences between groups’ measurements at the time of assignments to avoid bias. In addition, long-term side effects of clofibrate were not studied. Due to limited logistics, we could not measure serum bilirubin, lipids, and hepatic enzymes after 72 hours of starting treatment, as those measurements could possibly provide more information.

The study findings may be valid for all term neonates under 14 days of age who are breastfed and who have developed non-hemolytic jaundice.

Authors would like to thank all the parents who, with their consent, made this research possible. We are also thankful to the Clinical Research and Development Unit of Loghman Hakim Hospital, Shahid Beheshti University of Medical Sciences for the funding (SBMU.RETECH.1396.77).