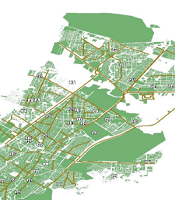 Sleep disorders are among important challenges for health policymakers due to its high prevalence and very high economic burden. Effect of air and noise pollutions on sleep quality and disorders has been proposed.

In the present study, the geographical distribution of people diagnosed as insomnia in Sleep Disorders Research Centers (SDRC) in the western Iran was investigated.

All patients with primary insomnia who diagnosed by polysomnography (PSG) in SDRC between 2011 to 2019 were recruited. The postal addresses of participants specified by a geographical coordinate represented longitude, latitude, and vertical position. These geographical coordinates converted to Geographic Information System (GIS) and addresses were located on the map. Then participants were divided into noisy and quiet environment groups based on their distance from highways, boulevards, and streets. Subjective and objective sleep characteristics were compared between these two groups by independent sample t-test or U Mann Whitney test using the Statistical Package for the Social Sciences (SPSS) version.22.

Of 78 participants, 47 were from Kermanshah city, 19 were from counties of Kermanshah province, and 14 participants were from Kurdistan, Ilam, Hamedan, Lorestan, Khuzestan and Tehran provinces. The location of all participants was presented on GIS maps. Result didn’t indicate any significant differences in sleep characteristics between the two noisy and quiet environment groups.

Most insomniac patients investigated in the SDRC come from Kermanshah city. Patient with insomnia may reach a level of the pathophysiological condition in sleep-wake regulation systems that lead to problematic sleep characteristics independently from environmental noise.

Sleep is a cyclic physiological demand of human beings that leads to elevation of threshold response to stimulus and immobilization. Seven to nine hours of sleep daily is recommended for a healthy life (1). Sufficient sleep is necessary for cognitive, motor, emotional, and endocrinology functions. Insufficient sleep could increase all-cause mortality rate (2, 3) and the risk for obesity (4, 5), mental (6), cardiovascular (7), and immune system problems (4). Insomnia is a more prevalent sleep disorder is a problem of inadequate sleep that resulted from unrefreshing sleep, frequent arousal and waking up from sleep during the night with difficulty returning to sleep, and waking up too early in the morning. The problem should be repeated three times a week for six months to perform insomnia (8).

In Iran as a developing country, sleep clinics start to develop throughout the country in the recent decade. Kermanshah University of medical sciences (KUMS) inaugurated the first sleep clinic in western Iran as Sleep Disorders Research Center (SDRC) in 2007. SDRC is the only sleep center in the west of Iran from 2007. In the present study, we aimed to look at the geographical distribution of people diagnosed as insomnia in SDRC from 2011 to 2019. Studies in developed western countries confirmed the destructive effects of environmental noise such as traffics and airports on sleep quality (21, 22). Noisy environment leads to frequent awakening, dysregulation of the autonomic neural system, reduced total sleep time (TST), reduced slow-wave and rapid-eye-movement (REM) sleep, and low sleep quality (23-25).

Data about the effect of the noisy modern environment such as airports, highways, and factories on the sleep quality of people who live around these places is scare in Iran. So, we also aimed to look at the effect of the location of patients’ houses on sleep characteristics.

Kermanshah is a province in western Iran. Kurds are a prominent ethnic group lived in Kermanshah. Kermanshah Province accounts for 1.5% of the total area of the country. This province is limited from north to Kurdistan Province, south to Ilam and Lorestan Provinces and east to Hamedan Province. Kermanshah province is among the provinces with low socioeconomic status. Based on the 2016 Census of Population and Housing, the province’s population was 1,952,434 (about 2.5% of the total Iranian population) with an estimated unemployment rate of 22% in 2016. This province is composed of 14 counties and has a total land area of about 25,009 km2 (26).

All patients completed the PSQI. The questionnaire documented the sleep characteristics in the last month subjectively. PSQI is an effective instrument used to measure the quality and patterns of sleep in the older adult. It differentiates “poor” from “good” sleep by measuring seven domains: subjective sleep quality, sleep latency, sleep duration, habitual sleep efficiency, sleep disturbances, use of sleep medication, and daytime dysfunction over the last month. The client self-rates each of these seven areas of sleep. Scoring of the answers is based on a 0 to 3 scale, whereby 3 reflect the negative extreme on the Likert Scale. A global sum of “5” or greater indicates a “poor” sleeper. if 5J is not complete or the value is missing, it now counts as a “0”.

Then all patients undergo a whole night polysomnographic investigation (SOMNOscreen™ plus PSG produced by SOMNOmedics GmbH, Germany) with monitoring of the thirty-eight-channel including eight electroencephalogram scalp sites.

The descriptive finding was presented for all participants. Then demographic and sleep characteristics were compared between noisy and quiet location groups by independent sample t-test or non-parametric Mann-Whitney U test. For normal and non-normal distributed variables. Distribution of data was analyzed by the non-parametric Kolmogorov-Smirnov test. Statistical analysis performed by The Statistical Package for the Social Sciences (SPSS) version.22. P value lower than 0.05 was considered as significant.

The Research Ethics Committee of KUMS approved this study process on (Code: IR.KUMS.REC.1397.444). Written informed consent was obtained from all participants. 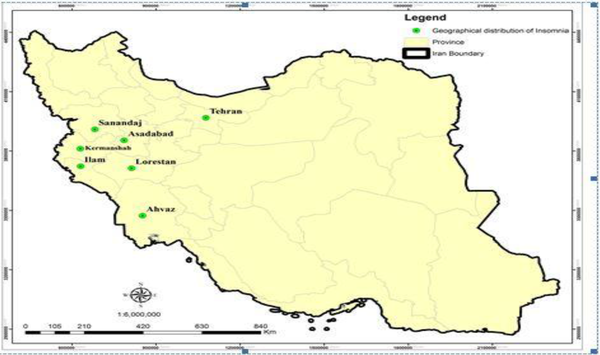 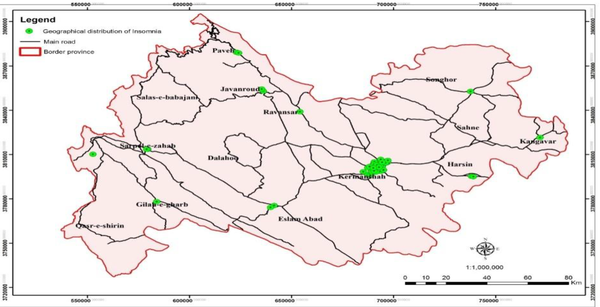 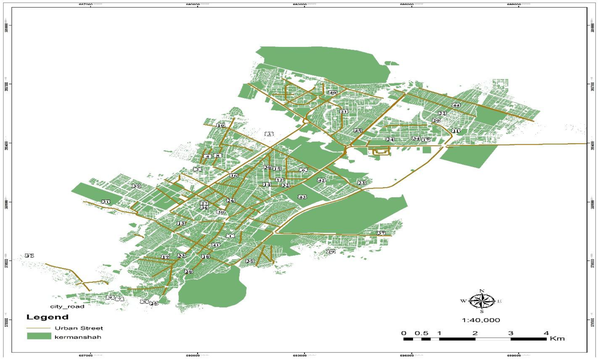 The Geographical Distribution of Patients With Insomnia in the Kermanshah City

According to the result of the Kolmogorov–Smirnov test, distribution of age and arousal sleep index are normal but other variables have non-normal distribution. So, age and arousal sleep index were compared between groups by independent sample t-test but other variables were compared by non-parametric Mann Whitney U test. Result didn’t any significant differences between the two groups in all variables (Table 2).

Table 2. Comparison of Demographic and Sleep Characteristics Between Noisy and Quiet Environment Groups. All Variables Presented as Mean ± Standard Deviation.

In the present study, we presented a geographical distribution of insomniac patients who refer to SDRC in Kermanshah from 2011 to 2019. According to the result, most patients lived in Kermanshah city. SDRC is the only sleep center in the west of Iran. Of 72 patients, only 8 participants were lived in noisy environment. There were no significant differences in sleep characteristics between noisy and quiet environment groups. Knowledge and awareness about sleep disorders among the general population are poor in developing and developed countries (13, 15). This condition also reported among the Iranian population as an important health issue (14, 20). Studies even reported insufficient knowledge about sleep disorders among healthcare providers (12). The present finding indicated that most insomniac patients who refereed to SDRC were from Kermanshah city, the city that SDRC has been located there. In addition to the availability of a sleep clinic, this finding may result from higher knowledge and awareness of healthcare provider in Kermanshah city compared to other cities in the west of Iran. This finding is highlighted when considering that all patients who underwent PSG in SDRS are referred from physicians. So, we can assume that physicians of Kermanshah city referred more patients to SRRC compared to neighboring cities. This condition may result from a higher knowledge of physicians in Kermanshah city. SDRC has held regular training course about sleep disorders for physicians, psychologists, other related healthcare providers, and related syndicates in Kermanshah. These regular courses have a positive impact on raising awareness and knowledge of the general population and healthcare specialists about sleep disorders. Iranian health policymakers should consider this issue for promoting sleep medicine centers and staffs all over the country.

We divided the participants into two noisy and quiet environment groups according to their addresses. Then the two groups ere compared for sleep characteristics. The result didn’t reveal any significant differences in total sleep time, sleep efficiency, wake index, and arousal index. This result differs from previous reports that indicated the effect of noisy environment on sleep characteristics (28-30). Participants who recruited for the present study were diagnosed as insomnia by a sleep clinician according to the detailed clinical interview and a whole night PSG investigation. The disorder has a heritability coefficient between 42% and 57%. Pathophysiological studies revealed an imbalance between arousal and sleep-inducing systems. This imbalance may observe as a sleep-inducing system’s hypoactivity or arousal system’s hyperactivity (31). Studies confirmed the interaction between insomnia and anxiety disorders (32). So, insomnia as a disorder may associate with an endogenous anxiety condition that resulted from internal and external anxiety triggers. But when the condition is triggered and lead to insomnia, it works independently from environmental factor such as environmental noises. So, the noisy environment may trigger insomnia, but when the disorder starts, sleep characteristics are not affected by noises in the environment. Setting up a sleep clinic is a money consuming process, so making knowledge available for the general population by national and local media, as a school- and university-based lessons and public books about sleep is necessary for the general population in Iran and other developing countries.

The general population and healthcare’s knowledge about sleep disorders may be improved by university-based clinical and research centers. So, most insomniac patients investigated in the SDRC come from Kermanshah city. Result didn’t indicate any significant difference in sleep characteristics between insomniac patients who lived in noisy and quiet environments. On the other hand, insomniac patients suffer from sleep problems independently from the region of the city where they lived. Patient with insomnia may reach a level of the pathophysiological condition in their sleep-wake regulation cycle that independently from environmental noise leads to problematic sleep characteristics.

Limitations of this research include: The subjects in the two groups all had sleep disorders, no sound metering was performed, and no factors such as the type of building and its insulation were considered. All subjects studied were those with severe degrees of sleep disorder who referred to the SDRC. In addition, low sample size is an important issue that should be considered for interpretation of precent results. We didn’t consider any normal sleepers as a control group. In addition, we didn’t measure the exact noise in decibel. Previous studies confirm the effect of intensity of noises measured as decibel on sleep quality (28, 30). Another study revealed that anxiety as an intermediate variable can adjust the effect of noise on insomnia symptoms (33). Both noise intensity and level of anxiety didn’t measure in the present study.

Copyright © 2021, Journal of Clinical Research in Paramedical Sciences. This is an open-access article distributed under the terms of the Creative Commons Attribution-NonCommercial 4.0 International License (http://creativecommons.org/licenses/by-nc/4.0/) which permits copy and redistribute the material just in noncommercial usages, provided the original work is properly cited.
download pdf 4.41 MB Get Permission (article level) Import into EndNote Import into BibTex
Number of Comments: 0