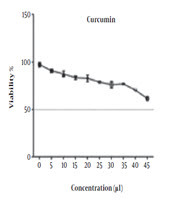 Breast cancer is one of the most common types of cancers and the leading cause of death, especially in women throughout the world. Various genetics and environmental factors have been identified as a risk factor for development of breast cancer. Long non-coding RNAs (lncRNAs) have gained significant attention in recent years as new and crucial players in cancer development. Curcumin is a plant compound that has been shown to inhibit various aspects of cancer including apoptosis, inhibition of cell proliferation, invasion and angiogenesis.

MCF7 cells were exposed to various concentrations of nanocurcumin and their metabolic activity was measured by MTT assay. The level of HULC and Linc-ROR genes was evaluated by real-time PCR. Apoptosis was also determined by Annexin test.

Our findings suggested that nanocurcumin exhibits apoptotic effects on breast cancer MCF7 cells by reducing the expression level of two proto-oncogene lncRNAs, HULC and Linc-ROR, which are both involved in downregulation of p53.

Cancer is an uncontrolled proliferation of abnormal cells. In normal cells, the proliferation is restricted by an appropriate balance of stimulatory and inhibitory factors. Dysregulation of genes involved in cell division control can lead to uncontrolled proliferation and cancer formation (1). Breast cancer is one of the most common types of cancer in women, accounting for 25% of all cases of cancer (2-4). Epidemiological studies in Iran have reported eight thousand people develop breast cancer every year. The incidence of breast cancer among Iranian women is reported to be about 30 to 35 per 100,000 people (5, 6).

The role of LncRNAs as tumor suppressor or oncogene has been proven in several types of cancers. Apoptosis is a planned cell death, which has many determinants in launching and promoting its messaging cascades (7). It has been reported that LncRNAs play an important role in controlling cell growth by regulating the cell cycle and apoptosis. Linc-ROR is a LncRNA that maintains important regulatory roles in interacting with miRNAs. It is well-known that during stress, DNA damage, the expression of tumor suppressor P53 is significantly increased by various translational and transcriptional mechanisms (8, 9). Linc-ROR is reported to be controlled by P53; thus, its level increases when P53 is up regulated. Given the several important roles of Linc-ROR, including inhibition of apoptosis in cellular stress, its importance in breast cancer is reported in various studies.

HULC is another LncRNA, playing important biological functions in cell proliferation and apoptosis (10). It is reported that downregulation of HULC leads to activation of p53 and induced the increased expression of p21, finally leading to cell cycle arrest and apoptosis. Thus, it indicates that HULC acts as an oncogene, metastatic indicator and is a potential therapeutic target (11).

Curcumin is a natural component of turmeric, which, due to its specific chemical structure, has unique biological and medicinal properties. Several cellular and molecular mechanisms involved in cancer formation have been reported to be target of curcumin. Considering that no specific toxic effects of this natural product have been reported, the use of this product as a supplement or treatment regimen in cancer patients is considered. Among various mechanisms, induction of apoptosis plays an important role in the anticancer effect of this substance (12).

The cytotoxicity and apoptotic effects of curcumin in cancer setting are both dose-dependent and time-dependent. Apoptosis induction by curcumin basically involves mitochondrial pathways (13). Curcumin is known to induce the expression of bax, cytochrome C, P53, P21, and suppresses Bcl-2 expression, reducing the mitochondrial membrane potential, releasing cytochrome C in cytosol, and exposing phosphatidyl serine residues to cellular levels. Reduced mitochondrial membrane potential by curcumin promotes caspase3 activity. This leads to release of cytochrome C and production of active oxygen species, which act on the P53 protein (14).

On the basis of this knowledge, this study was conducted to investigate the ability of nanocurcumin to induce apoptosis on MCF7 breast cancer cell. Our findings showed that concentrations 15 µM and 20 µM of nanocurcumin are capable to induce apoptosis in MCF7 breast cancer cell line. This anticancer effect seems to be partially the result of down regulation of two oncogenic LncRNAs, Linc-ROR and HULC.

Considering the importance of the number of cells per well in MTT test results, a standard curve was first drawn to select the optimal number of cells. In this way, the number of cells was determined for 48 hours to be 6,000 cells. After reaching the standard number of the cells, 10 µL of MTT (5 mg/mL) was added to each well. The insoluble color in the water was solved by DMSO (200 µL/well), and then the color intensity was evaluated by the ELISA reader (BioTekU.SA). In the next step, the specified number of cells according to the previous step in each of the wells was cultured, but this time, different concentrations of nanocurcumin were added to each well. Cells were incubated with nanocurcumin for 48 hours. After this time course, MTT solution was added in the same manner and the result was determined by the ELISA reader.

Ampliqon Taq DNA polymerase 2× Master Mix Red (Denmark) was used for RT-PCR, according manufacturer’s protocol. By gradient PCR the optimal temperature for primer annealing was determined. Real time PCR was performed for target genes and GAPDH as internal control. The sequences of primers were as fallowed:

Apoptosis assay was performed using the Annexin-V-FluosStaining kit (Roche, Germany) according to kit instructions and the data was analyzed using FlowMax software.

The results of cell survival rate (active metabolic cells) were evaluated by MTT assay. Our findings showed that IC50 concentration for MCF7 cells was 20 µM for 48 hours treatment with nanocurcumin. However, the treatment of these cells with the same concentrations of curcumin did not reach IC50, even at 45 µm. This was the same case for nanocarrier as well (Figure 1). 4.2. Effect of Nanocurcumin on Expression Level of HULC and Linc-ROR

4.3. Effect of Nanocurcumin on Cell Apoptosis

The result of flowcytometry followed by Annexin test showed that nanocurcumin in concentrations 15 µM and 20 µM induced cell apoptosis in 97 % of MCF7 cells.

Extensive studies have been conducted on therapeutic effects of nanocurcumin, especially in different types of cancers. It has been shown that this compound can induce apoptosis in various types of cancer cells (15, 16).

Here we showed that nano-formulation of curcumin can induce apoptotic death of MCF7 cells, in a dose dependent manner (Figure 3). Moreover, nanocurcumin concentrations at 15 µM and 20 µM doses led to 97% apoptosis in this cell line.

In order to evaluate the effect of nanocurcumin on two lncRNAs, involved in cancer development, we treated MCF7 cells with different concentration of this compound. Our results showed that nanocurcumin treatment significantly decreased the expression level of HULC and Linc-ROR genes.

Accumulating evidence has demonstrated that linc-ROR and HULC are highly expressed in a variety of cancers, including breast cancer. Increased expression of these lncRNAs is thought to enhance different aspects of cancer development including, tumor growth, migration and invasion, and promotion of epithelial–mesenchymal transition.

It is known that linc-ROR and HULC both are involved in regulation of tumor suppressor, p53. Linc-ROR regulates p53 in a feedback regulatory loop. While, induction of p53 increases the linc-ROR level, linc-ROR can significantly suppress p53 in a translation repression mechanism by interrupting the interaction of heterogeneous nuclear ribonucleoprotein I (hnRNP I) with p53 mRNA. The suppressive effect of HULC on activity of p53 and p21 has been indicated as well.

Thus, our findings suggest that nanocurcumin induces apoptosis through promoting the expression of p53, via down regulation of linc-ROR and HULC.

The authors would like to thank Labratoary Staff of Tarbiat Modares University.

Copyright © 2020, Journal of Human Genetics and Genomics. This is an open-access article distributed under the terms of the Creative Commons Attribution-NonCommercial 4.0 International License (http://creativecommons.org/licenses/by-nc/4.0/) which permits copy and redistribute the material just in noncommercial usages, provided the original work is properly cited.
download pdf 411.92 KB Abstract XML Get Permission (article level) Import into EndNote Import into BibTex
Number of Comments: 0