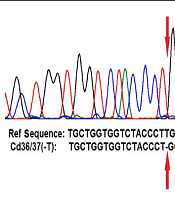 Beta thalassemia is an autosomal recessive genetic disease with the symptoms of severe anaemia, ineffective erythropoiesis and bone deformities. Preimplantation genetic diagnosis is a noninvasive clinical tool for couples who are at risk of affected pregnancy to have a healthy child.

Here we report a PGD test for a couple who were heterozygous for CD36/37(-T) mutation in HBB gene and had terminated one affected pregnancy.

Haplotype analysis of 6 flanking STR markers as well as variant detection by cycle sequencing were included in our PGD test in order to investigate the status of the embryos reliably.

Three out of five embryos were transferable.

One normal and one carrier embryo were transferred which resulted in the singleton pregnancy and the birth of a healthy girl.

The thalassemia is a group of autosomal recessive inherited disorders caused by mutations in the α- and β-globin genes leading to decreased production of one of the globin chains of hemoglobin (Hb) (1).

Mutations in HBB gene (OMIM No. 141900) on chromosome 11p15 result in either reduced (β+) or absent (β0) β-globin chain synthesis leading to β-thalassemia (OMIM No. 613985) (1, 2) which is the most common autosomal recessive inherited disorder among hemoglobinopathies worldwide (3, 4).

The most frequent mutations in the HBB gene are point mutations, however more rarely, the deletions of the entire beta-globin gene cluster or of locus control region beta (OMIM No. 152424) are reported to be causative too (6).

Prenatal diagnosis using amniocentesis and chorionic villus sampling techniques is used throughout the world in order to prevent the birth of the HBB affected children (3). However the rate of termination of one or more pregnancy is high in some cases (5). Alternatively, Preimplantation genetic diagnosis can be used in which the healthy embryos are selected before implantation and decrease the need for pregnancy termination.

Three decades have passed from the first time that PGD was applied for human (7-11). Briefly a single cell biopsy is performed from each embryo on which the DNA analysis is carried out using different methods such as polymerase chain reaction PCR, PCR-RFLP, ARMS PCR or fluorescent in situ hybridization (FISH) (3, 12). However, one of the problems associated with PGD is the possibility of misdiagnosis due to allele drop-out (ADO) (5).

Here we report a reliable PGD technique for β-thalassemia in which both cycle sequencing and linkage analysis were employed (3). This screening resulted in the birth of a carrier girl.

The PGD was performed for a couple (32 year old female and 39 year old male) with consanguineous marriage who were both carrier for CD36/37(-T) in HBB gene. These couple had the history of pregnancy and subsequently abortion of one affected fetus. Two cycles of PGD with 4 embryo transfer had been performed for this couple in another PGD center which did not end in pregnancy.

The informed consent for PGD testing was obtained from the couple. The study was approved by the local ethics committee.

Two different tests (STR based linkage analysis and Cycle sequencing) were used to study the CD36/37(-T) mutation in HBB gene.

Table 1. Primers Designed for Cycle Sequencing and Linkage Analysis. Forward Primers of the STR Markers Were Fluorescently Labeled with FAM.

The PGD workup started with DNA sample analysis of the couple and additional family members. STR haplotyping for family members was performed, in order to identify the most informative STR markers linked to the HBB gene, to be used in the following clinical PGD cycle.

Blastomeres from 5 embryos were received from IVF center. After cell lysis and DNA extraction, whole genome amplification (WGA) was performed on each blastomere and positive and negative control samples using the Picoplex WGA kit from Rubicon Genomics. The PGD test was performed on the purified products.

The STR haplotypes which were linked to the HBB normal and mutant alleles were inferred by investigating the family members (Figure 1). The DNA of aborted fetus was not available for this purpose. 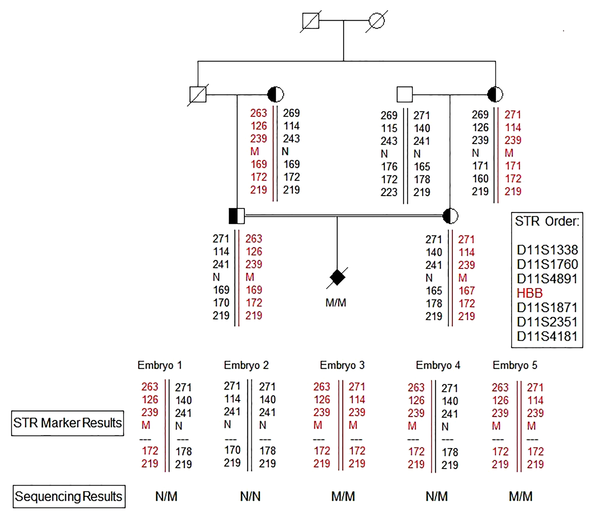 Results of STR-based linkage analysis and cycle sequencing used in PGD for Beta thalassemia. Locus dropout was observed for D11S1871 in all embryos

One homozygous normal and one heterozygous embryos were transfered which ended in a singleton pregnancy.

PND was performed at 15th week of gestation and the conception of a female fetus which was heterozygous for CD36/37(-T) mutation was confirmed. The healthy girl was born.

B-thalassemia is a hemoglobinopathy which is caused by mutations in the HBB gene (3, 13).

Prenatal diagnosis and subsequent termination of the affected pregnancy is a major alternative for high-risk couples (14).

However, ADO is reported as a common problem of PGD which may lead to false results in both recessive and dominant inherited disorders. In order to lower the risk of misdiagnosis, testing two cells from each embryo or increasing the informative markers at each side of the mutated gene is recommended (3, 16-18). According to the ESHRE guideline, analysis of at least two flanking markers which are closely linked to the causative gene reduces the risk of ADO from 5% to 1% (16).

Here we report a PGD test for HBB gene for a couple who were carrier for CD36/37(-T) mutation. Although the couple we studied had consanguineous marriage and both had the CD36/37(-T) mutation, but based on the family study and haplotype analysis we found that the mutation was not inherited from a common ancestor.

There was conformity between the results of the linkage analysis and cycle sequencing.

Locus dropout was observed for D11S1871 in all embryos.

Embryos 1 and 2 were transferred and resulted in singleton pregnancy and birth of a carrier girl.

Using both cycle sequencing and indirect analysis by 6 flanking STR markers (3 upstream and 3 downstream markers) our test was reliable and easy to interprete.

Copyright © 2019, Journal of Human Genetics and Genomics. This is an open-access article distributed under the terms of the Creative Commons Attribution-NonCommercial 4.0 International License (http://creativecommons.org/licenses/by-nc/4.0/) which permits copy and redistribute the material just in noncommercial usages, provided the original work is properly cited.
download pdf 1.51 MB Get Permission (article level) Import into EndNote Import into BibTex
Number of Comments: 0