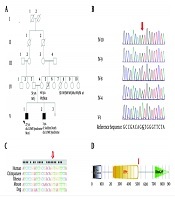 Lowe syndrome is a condition that primarily affects eyes, brain, and kidneys. This disorder follows X-linked recessive mode of inheritance and it occurs in males mainly. Mutations in OCRL (located at Xq25) gene can cause accumulation of phosphatidylinositol bisphosphate and disturbed actin cytoskeleton remodeling. There are 268 mutations in OCRL gene causing Lowe syndrome or Dent disease 2 in HGMD database, however 10 - 20% of Lowe syndrome suspects remain undiagnosed at molecular level. Here we present a male case of Lowe syndrome with characteristic features. Comprehensive clinical examination and genetic counseling were performed. Sanger sequencing was employed to investigate the possible OCRL mutations and we identified a donor splice site variant (NM-000276: c.2469 + 1G > A) in hemizygous state. This is a pathogenic variant according to the ACMG standards and guidelines and might explain the clinical features of the patient. This result is in accordance with the clinical diagnosis of Lowe syndrome and it is absent from ExAC, 1000 G, Iranome, GME, gnomAD Genome databases of healthy controls. In-silico analysis of this splicing variant revealed that the position is highly conserved between species. Splicing prediction tools predicted some changes in splicing pattern of the OCRL transcript, elimination of some protein features, and malfunctioning the OCRL protein as a consequence of this variant. Accordingly, we proposed the c.2469 + 1G > A variant might explain the clinical features in studied patient and be employed for prenatal diagnosis of Lowe syndrome in the family.

The oculocerebrorenal syndrome of Lowe (OCRL) [OMIM# 309000] is a rare multisystemic X-linked disorder, which affects 1 person in 500000 in general population (1). An spectrum of abnormalities in eye, kidney, skeletal, and neuronal systems are associated with Lowe syndrome (2). Clinical features are including but not limited to intellectual disability, failure to thrive, congenital cataract, glaucoma, joint hypermobility, scoliosis, genu valgum, sebaceous cysts, seizures, and kidney disease (2, 3).

Genetic basis of Lowe syndrome was first described through studying a girl with X/autosomal translocation (t(X;3) (q25;q27)). Hodgson et al suggested that underlying genetic defect might exist in a locus located at Xq25 band (4). Further details provided through studying two unrelated females with Lowe syndrome and the OCRL gene assigned as the most probable causative gene (5). The gene comprises 23 exons and stretches 52 kb on Xq25-26 chromosome.6 All OCRL exons are coding region except the last one and alternative splicing of exon 18a has been demonstrated in the brain (6, 7).This gene encodes phosphatidylinositol 4,5-bisphosphate-5-phosphatase protein, a component of Golgi network that is involved in regulating membrane trafficking, and also play a role in primary cilium formation (8). This protein regulates traffic in the endosomal pathway by regulating the specific pool of phosphatidylinositol 4,5-bisphosphate that is associated with endosomes (9). The OCRL also acts as a regulator of phagocytosis, hydrolyzing phosphatidylinositol 4,5-bisphosphate (PtdIns(4,5)P2) to promote phagosome closure, through attenuation of PI3K signaling (10).

An array of mutations (268 mutations) in this gene cause Lowe syndrome or Dent Disease 2 except regulatory/repeat variations (HGMD Professional 2019.4), however in 10% - 20% of Lowe syndrome suspects genetic determinants remain undiagnosed molecularly (11). Cardinal features of the disease include dense congenital bilateral cataract at birth,1 involvement of central and the peripheral nervous systems (12), neonatal hypotonia,1 seizures (up to 50% of Lowe syndrome cases) (12), behavioral abnormalities in more than 80 % of patients (13), neuropathological findings (14), proximal tubular dysfunction (15), progressive renal failure often leads to end-stage renal disease (ESRD) (16), and proteinuria which is observed in all patients. Some of these features were not observed in all patients of Lowe syndrome and Possible genotype-phenotype correlation and the spectrum of mutations are described elsewhere (2).

Here we presenting complete clinical and molecular characterization of a Lowe syndrome patient. Since the disease is rare, this will help more accurate clinical/molecular diagnosis, improved genetic counseling, and offering appropriate reproductive options to such families.

A 21 years old male patient was referred to Tehran Medical Genetic Laboratory (TMGL) in order to receive genetic counselling and possible molecular diagnosis. The patient was born to a consanguineous marriage, while there was a history of a deceased affected male sibling in the family with same clinical manifestations (Figure 1 and Figure 2A). Genetic counseling and clinical examination undertaken and patient’s consent form obtained from patient’s parents. Cardinal features of Lowe syndrome perfectly matched with the patient’s phenotype as listed in Table 1. Therefore, analysis of the OCRL gene was conducted to establish molecular diagnosis.

Table 1. Clinical Findings in the Patient 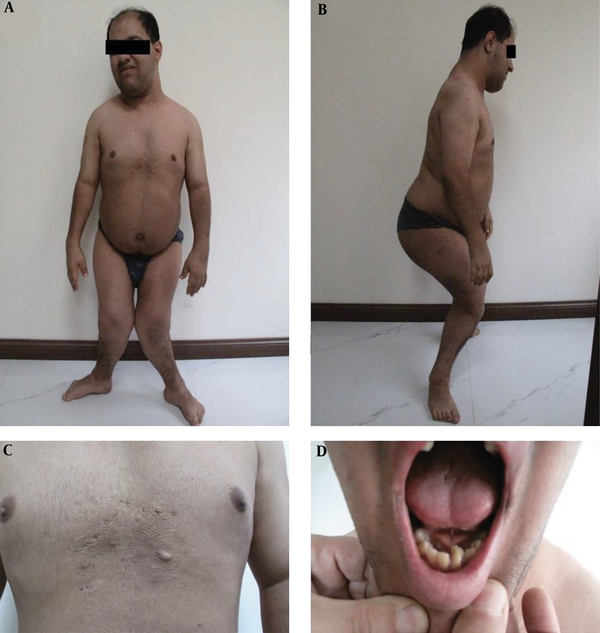 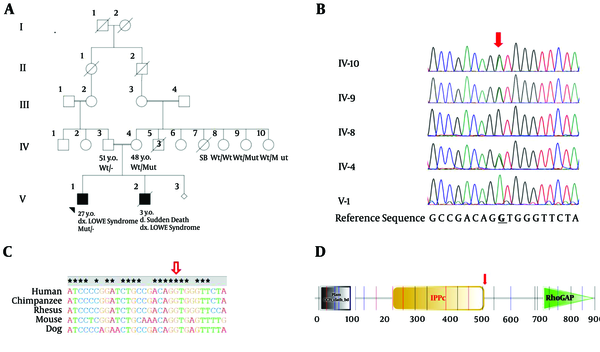 3.2. Molecular Characterization of the OCRL Gene

The patient’s peripheral blood was drained from antecubital vein and used to extract genomic DNA and molecular characterization. Genomic DNA was extracted using standard salting-out method and implemented in PCR reactions to amplify and analyze the entire coding region of the OCRL gene. Sanger sequencing of PCR products conducted on ABI 3130 genetic analyzer platform (Applied Biosystems, USA). DNA sequences were aligned to the GRCh37 assembly of the human genome and called variants were classified according to the ACMG standards and guidelines (17). We also studied the variant in all family members and performed segregation analysis for further evaluation of the variant.

3.3. Bioinformatic Analysis of the Variant

The first set of questions aimed to be answered were about the clinical diagnosis of Lowe syndrome. It can be seen from the data in Table 1 that clinical presentations of the patient are in accordance with Lowe syndrome diagnosis. Cardinal features of the patient are illustrated in Figure 1 and all are consistent with the clinical diagnosis of Lowe syndrome. Through reviewing the literature, we extracted the prevalence of each finding in Lowe syndrome patients and compared with those findings observed in the patient (Table 1). The patient has shown many symptoms of the Lowe syndrome even those observed less frequent in such patients such as phosphaturia. Cognitive impairment in this patient was evaluated as mild-moderate and we were unable to examine his brain through MRI/CT-Scan since his parents refused our request. The clinical diagnosis is also supported by the pedigree (Figure 2A) at first glance. Since the disease is X-linked recessive and mutations of OCRL gene can cause Lowe syndrome, we analyzed the OCRL gene through Sanger sequencing method.

4.1. Molecular Characterization of the OCRL Gene

Thanks to Sanger sequencing and investigation of all OCRL coding regions, we identified a hemizygous variant in a donor splice site of the gene with the following coordinates; chrX: 128722991G > A; OCRL (NM-000276.4):c.2469 + 1G > A (Figure 2A and B), which is classified as a pathogenic variant (PVS1, PM2, PP3, PP5) according to the ACMG standards and guidelines (17). This variant was absent from our In-House database (TMGL db), ExAC, 1000 G, Iranome, EVS, GME, and gnomAD Genome databases, which indicates its rarity amongst healthy controls and its possible deleterious effects. Recently, the variant has been reported as a likely pathogenic variant in ClinVar database (variation ID: 835463). Through segregation analysis of the variant, we characterized patient’s mother and his two sisters as carriers of the OCRL splicing variant. In addition, his father carries the wild-type allele and he is healthy. Consequently, the OCRL variant and symptoms confers the X-linked pattern of inheritance consistent with the Lowe syndrome diagnosis (Figure 2A).

4.2. In-silico Analysis of the Splicing Variant

The mutation position is highly conserved between multiple species (Figure 2C) and our evaluations using NNSPLICE (https://www.fruitfly.org/seq_tools/splice.html), NetGene2 (http://www.cbs.dtu.dk/services/NetGene2/), and HSF (http://www.umd.be/HSF/) showed that c.2469 + 1G > A variant may critically affects the OCRL mature transcript due to changes in donor splice site (Table 2). This may cause elimination of some protein features in downstream of the altered splicing site. Other features of the variant and possible effects on OCRL protein structure are mentioned in Table 2 and Table 3. This splicing variant affects the Rho-GAP domain of OCRL protein and elimination of affected domains is a probable consequence of this pathogenic variant (Figure 2D).

Table 2. In Silico Evaluation of the Varianta

Taken together, the c.2469 + 1G > A variation in OCRL gene might be a pathogenic variant with detrimental effects on protein structure and function.

The oculocerebrorenal syndrome of Lowe is of interest because of its rarity and the allelic heterogeneity exhibited by the OCRL gene. In Iran, there is only one report of Lowe syndrome in the literature before this report (18). The patient we studied here showed most hallmarks of Lowe syndrome (Table 1 and Figure 1) and (2). The clinical consequences of c.2469 + 1G > A are in accordance with other OCRL mutations and manifestations of Lowe syndrome (https://www.omim.org/). This variant is absent from public databases of healthy controls as well as our in-house database (TMGL db) including more than 200 exome sequencing projects (Table 2). This splicing variant may cause elimination of six helices from the OCRL protein structure including the Rho-GAP domain (GTPase-activator protein for Rho-like GTPases) (Table 3 and Figure 2D). This family of protein domains transduce signals and control cell adhesion, motility and shape by actin cytoskeleton formation. Rho proteins act as molecular switches and need GTPase-activating proteins (GAPs) which stimulate the intrinsic GTPase activity of small G proteins (http://smart.embl-heidelberg.de/). Elimination of OCRL Rho-GAP domain might alter the protein function through malfunctioning of signal transduction and cause development of the oculocerebrorenal phenotype. We have to bear in mind that c.2469 + 1G > A might influence on the last two coding exons of the OCRL gene, consequently attenuated clinical findings are expected due to non-coding inherent of exon 23 of the OCRL gene.

There is no significant genotype-phenotype correlation regarding the severity of the disease, therefore comprehensive clinical examination of the present patient may help expansion of the genotype-phenotype correlation. Two missense variants (p.Ile274Thr, p.Arg318Cys) are associated with both the mild Dent-2 phenotype and the classic OCRL phenotype, even within the same family (11). Besides, there is an observation on how p.Asp523Asn variant exhibits some genotype-phenotype correlation (19). These mutations were reported in OCRL IPP domain (Inositol polyphosphate phosphatase), which is homologues to catalytic domain (http://smart.embl-heidelberg.de/). The mutation we identified (c.2469 + 1G > A) is located in Rho-GAP domain and associated with Lowe syndrome phenotype. It was suggested that there is a broad phenotypic spectrum of OCRL mutations, suggesting that Dent disease-2 may be a mild variant of Lowe syndrome (20). To the best of our knowledge, there is no clear correlation between genotype and clinical consequences in OCRL related disorders and comprehensive presentations of such cases may help to establish such correlations. The paucity of genotype-phenotype correlation in Lowe syndrome may be addressed by studies like what we did here and raises intriguing questions regarding the nature and extent of OCRL mutations and their clinical consequences.

Management of this patient was conducted by early removal of cataracts with postoperative glasses regarding to his cataract. However, and despite surgical lens are not recommended for such patients (1), the patient V-1 has been benefitted from intraocular lens implant. Generally, the OCRL phenotype is associated with variable degrees of intellectual disability (ID) (1). The patient V-1 shows mild-to-moderate ID, similar to 25% of OCRL male patients. Since, the patient presents with seizures, anticonvulsant therapy was conducted using lamotrigine (25 mg/day) (https://www.drugs.com/mtm/lamotrigine.html) and depakine chrono (500 mg/day) (https://www.drugs.com/international/depakine-chrono.html). Treatment of renal tubular dysfunction performed by oral supplements of sodium and potassium bicarbonate. The patient V-1 does not need to renal transplantation or dialysis. Other management strategies for Lowe syndrome patients are described elsewhere (21).

Correlation of OCRL mutations with the Lowe syndrome is well established in the literature while there is no clear genotype-phenotype correlation. Here we studied a characteristic case of Lowe syndrome comprehensively and this may help expansion of the clinical phenotype and mutation spectrum as well. We proposed the c.2469 + 1G > A pathogenic variant might affect the OCRL structure and function and may explain the clinical features in this patient.

The authors should appreciate patient and his family members for their kind contribution in the study. The study conducted at Tehran Medical Genetics Laboratory and Tehran Genetic Counseling Center.

Copyright © 2019, Journal of Human Genetics and Genomics. This is an open-access article distributed under the terms of the Creative Commons Attribution-NonCommercial 4.0 International License (http://creativecommons.org/licenses/by-nc/4.0/) which permits copy and redistribute the material just in noncommercial usages, provided the original work is properly cited.
download pdf 4.84 MB Get Permission (article level) Import into EndNote Import into BibTex
Number of Comments: 0