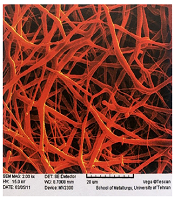 Differentiation of human mesenchymal stem cells (hMSC) to neural cells on Nano-scaffolds is a promising method for the treatment of the damaged nervous system through bionanomaterial-cell transplantation. The hMSC’s multipotential features have been discovered in various tissue engineering researches. This investigation shows the in-vitro development and neural differentiation of hMSC in 3D and 2D environments. The 3D environment which used in this study is nanofibrous polycaprolactone (PCL). The differentiation potential of mesenchymal stem cells (MSCs) to neural cells, on the random polycaprolactone (PCL) nanofibrous scaffolds, and tissue plate was examined. Researches have proved that interaction of extracellular nanofibrous matrix with in-vivo cells, gives mechanical maintenance to the cells and plays a functional role in the control of cellular behaviour. Stem cells are developing as a fundamental tool in the evolution of tissue engineering and regenerative medication. PCL characterization was determined employing scanning electron microscopy (SEM). Agents like, retinoic acid, epidermal growth factor (EGF), fibroblast growth factor (FGF-2), and Ibmx, which they are neural inducing agents, added in DMDM/F12 to differentiate MSCs to neural cells. Reproduction of mesenchymal cells on PCL nanofibrous scaffolds and neural morphology revealed through a scanning electron microscope (SEM) and optical microscope outcomes. The differentiated mesenchymal cells on nanofibrous scaffolds express neural gene markers including; β- tubulin III and Map2 on the day of 14. Our investigation recommends the potential usage of differentiated neural cells from hMSCs on Nano-scaffolds toward the improvement of neural cells. This study conducted in 2011.

Repairing the neural damages employing nerve tissue engineering is one of the most promising approaches. In neural tissue engineering, nano-scaffolds use as an extracellular matrix and their efficacy has proved by various researches. Directing role of biomaterial substrates in the differentiation of mesenchymal stem cells (MSCs) has been proven (1, 2). MSCs obtained of bone marrow (BM) are non-hematopoietic stem cells, containing the ability to differentiate into various ectodermal (neural), mesenchymal (adipocyte, chondrocytes), and endodermal (hepatocytes) tissue cells (3). MSC is one of the accessible cell origins of the body, containing the most simple clinical technique of culturing with a high self-regeneration role (4). New researches have demonstrated the capability usages of MSCs obtained of bone marrow, which differentiated on the nano-scaffolds, to tissue renewal (5). Osteoblasts or chondrocytes, which differentiated from MSCs on the 3D nanofiber matrix, were evaluated in the various studies (6, 7). Differentiation of MSCs on the electrospun nanofiber scaffolds has considered in many studies. Scaffolds for tissue regeneration are essential as they provide suitable requirements for cell resistance regeneration and differentiation and tissues' expansion for desired tissue engineering goals (8). Contemporary researches have aimed to build and develop suitable scaffold for tissue reconstruction (9). This examination evaluated the efficacy of polycaprolactone (PCL) nanofiber matrices produced via the phase separation technique as a scaffold for neural tissue reformation (10). PCL presented as a biomaterial for medicine and drug delivery method (11, 12). Furthermore, PCL is a fabricated environment-friendly and non-toxic polymer that has considered a biomaterial for nerve tissue engineering as its convenient form appearance. Although, its low hydrophilicity regularly performs in limited cell adhesion on scaffolds.

An admirable scaffold must produce a strong bond for the cell to attach. Therefore, in this research, the scaffolds were coated by oxygen plasma to improve hydrophilic properties. PCL produces by electrospinning which is a technique used to fabricate polymeric nanofibers applying electrostatic power (13). The hydrophilicity of polycaprolactone (PCL) was improved using O2 plasma treatment. Physicochemical and mechanical properties of random PCL nanofibers scaffolds were evaluated by determining tensile strength and contact angle using a scanning electron microscope (SEM) (14).

This investigation considers the potential application of MSCs for nerve generation on plasma treated polycaprolactone (P-PCL) nanofibrous scaffolds as a system to improve the neural differentiation leading to neural tissue engineering. In this study, neural gene expression, involving β-Tubulin III and Map2, were examined by immunocytochemistry aim to detect the differentiation of MSCs to neural cells (15).

Chloroform /DMF (9:1), with PCL (8 wt %) which dissolved in is required to perform the electrospinning process. Polymer-solution was loaded to a syringe with needle 21G. A syringe pump was used to feed the polymer solution to the needle tip with a flow speed of 0.5 ml per hour. A high voltage power supply was used to provide the needle with a 25 kV positive voltage. To achieve random nanofibers, a rotating disk with 100 rpm linear rate was applied. The collector was placed in 23 cm from the needle tip. In high-level voltages, Taylor cone was formed, and an electrically jet of the melt (polymer solution) was spattered on the collector. Before using, the nano scaffold was dried overnight.

Plasma modification on PCL nanofibrous was conducted employing a plasma cleaning equipment (Germany). Nano-scaffold was located on the chamber of the plasma cleaner. Radiofrequency with electricity power of 30w, following vacuum mode, was applied to plasma vacate.

Cells nourishing with a new medium every three days, and they were kept in a humid incubator at 37. Trypsin was used to isolate cells from the bottom of the plate before feeding. Neubauer lam was employed to enumerate the cells. For culture MSCs on the scaffold, the cells in the second passage were employed.

After culturing the MSCs on tissue plate, the MSCs were isolated from the bottom of the culture plate using trypsin and were cultured on P-PCL nano scaffolds. After seven days of cell feeding, both the MSCs cultured on the scaffolds and the culture plate were prepared for SEM and Optical images. The morphology investigation was conducted for in vitro cultured mesenchymal stem cells on P-PCL scaffold and the plate. PBS was used to rinse the scaffold for twice, as well as, 2.5% glutaraldehyde was used to fix the scaffold for three hours. Scaffold was then dried in 15 minutes with different ethanol concentrations (60%, 70%, 80%, 90%, and 100%). Eventually, the scaffold was coated by gold, and then scrutinized with SEM.

Induced hMSCs, which were developed on electrospun P-PCL nanofibrous, and also in the plate, were prepared for immunocytochemistry analyses. In the first step, 4% paraformaldehyde was ordered from Sigma-Aldrich, and was used for 20 minutes in 4°C to fix the cells. PBS was used to wash the cells. As well as, Trion- x100 was used for five minutes to block the cells. Then, 5% goat serum was added to the wells containing cells for 45 minutes. In the second step, Primary antibody, anti (1: 500, Bioscience) was added to wells at 4°C overnight. As well as, primary antibody, β-Tubulin (205: 200, Bioscience), was further conducted. In the third step, PBS was applied to rinse the cell-scaffold, and anti-mouse Fluorescein Isothiocyanate secondary antibody (FITC, 1: 500, Sigma) was added to the wells for three hours. Additionally, 4,6-diamidino-2-phenylindole (DAPI 1: 10000 in PBS, Invitrogen, USA) was used for 1 minute to stain the nuclear. The final wash was done with PBS before imagine with the fluorescence microscope (Nikon, Germany). For negative controls of FITC, we considered a cultured cell without primary antibody incubations. 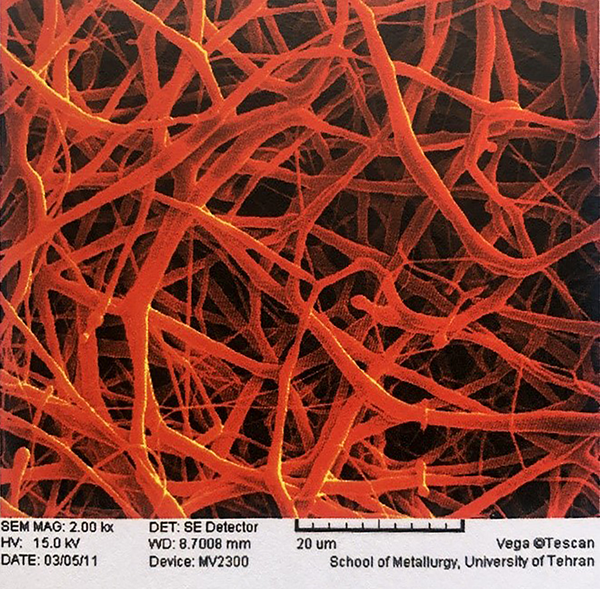 Figure 2 reveals typical morphology of culture mesenchymal stem cells on plate (2D environment) and P-PCL scaffolds (3D environment) after one day of cell culture. The image of MSCs cultured on the plate was taken by an optical microscope, and the image of MSCs cultured on the nano scaffold was taken by an electron microscope. Mesenchymal stem cells have a flat fibroblast-like form. Figure 3 shows a typical morphology of neural cells differentiated from MSCs using neural induction medium. Differentiation of MSCs was conducted on both 2D environment (plate) and 3D environment (PCL nano scaffold). 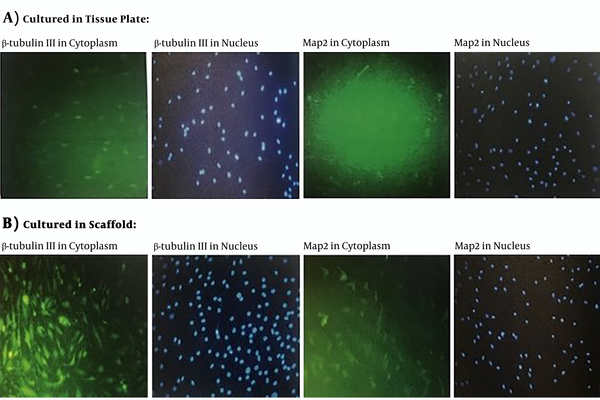 Stem cell therapy is a promising strategy for the healing of the injured CNS. MSCs have been examined in many studies aim to stem cell-based transplantation in restoring damaged spinal cord (16, 17) because of easy access, low immunogenicity paracrine (18, 19) and immune-modulatory effects (20). MSCs of bone marrow operate an essential function in tissue reconstruction. Though different from an embryonic stem cells (ESCs) in some features. MSCs have self-renewing ability and multilineage differentiation but are free from ethical concerns and tumorigenesis danger (21). Consequently, these cells are more suitable than other cell references for medical usages. Illustrating the impacts of mesenchymal stem cells on peripheral nerve rehabilitation have recommended by numerous desirable mechanisms. Generally, mesenchymal stem cells build a desirable condition for nerve rehabilitation. They influence nerve reconstruction development by cell transplantation induction, growth factors production, construction of extracellular matrix, anti-inflammatory release as well as immune system regulators (22). Mesenchymal stem cells are recommended to differentiate into bone, cartilage, cardiac myocytes, and neural cultures (23, 24). The neural differentiation of MSCs was notified as a method of cell therapy.

A biocompatible scaffold, useful cell source, and suitable biochemical circumstances are essential for improving biological replacements that can repair, sustain, or enhance tissue function (5). The idea of employing the MSC-bio nanomaterial method for transplantation in nervous system damage was examined (25, 26). This method includes the transplantation of electrospun polymeric nanofibrous scaffolds, including differentiated neuronal cell from MSCs. Electrospun nanofibers structures give construction resistance, architectural direction and facilities in cell connection to reply desirable response to the in-vivo alterations to improve the ECM (27). The P-PCL nano-dimensional scaffold, which mimics the ECM, can improve tissue reformation in vitro comparable to how the original ECM effects.

In this research we determined that the P-PCL nanofibers assembled by electrospinning have a possible utilization in nerve tissue engineering.

Different nanofibrous scaffolds can be applied for the formation of nanofibrous scaffolds for nerve reconstruction. PCL has been widely utilized for tissue engineering due to its tremendous tensile strength, non-toxic creation, and biodegradability (28). However, its hydrophilic characteristic is favorable for in vitro cell culture plasma processing. Plasma treatment is an efficient technique for improving surface hydrophilicity of polymers by groups containing oxygen (OH, COOH.) (29). Plasma surface treatment of scaffolds with N2, O2, and NH3, which have affirmed in several investigations, gives the polymer’s surface further hydrophilic, further polar, and further bio-adhesive (30). In this research, nanofibrous surface treatment with plasma was an effective method to develop PCL nanofibers hydrophilic quality.

The β-tubulin and Map2 are neural gene markers which were recognized by immunocytochemistry in neuronal cells differentiated from MSCs on P-PCL nanofibers after 14 days of cell culture, indicating the neural cells differentiated of MSCs. Morphological, as well as immunological assessment, affirmed the MSCs differentiation into nerve cells on the nano-scaffolds. We have shown the morphological and genes expression of neuronal cells created from MSCs, in fabricated nanofibrous. The molecular mechanisms for longe-time neuronal differentiation engaged in the development of nerve system have not yet fully understood, and more researches are needed to explain the nerve system development.

Thanks to Iranian Stem Cell Council, which supported this research.

Copyright © 2021, Journal of Human Genetics and Genomics. This is an open-access article distributed under the terms of the Creative Commons Attribution-NonCommercial 4.0 International License (http://creativecommons.org/licenses/by-nc/4.0/) which permits copy and redistribute the material just in noncommercial usages, provided the original work is properly cited.
download pdf 11.12 MB Get Permission (article level) Import into EndNote Import into BibTex
Number of Comments: 0