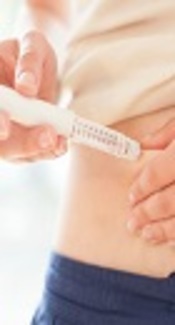 The prevalence of diabetes – especially diabetes type II- is increasing steadily; according to WHO reports it will increase to 366 million people by the year 2030. Microvascular complications including Proliferative diabetic retinopathy (PDR) and end stage renal disease (ESRD) are increased in patients with diabetes mellitus. Case-control association studies have demonstrated that rs1617640 SNP in the promoter of erythropoietin (EPO) gene is significantly associated with PDR and ESRD. In the mentioned SNP, TT genotype is considered as risk genotype which means that EPO concentration in human vitreous body in these people shall be higher. People with TT genotype are much more at risk of retinopathies. In this study we investigated the existence of rs1617640 EPO gene polymorphism among 150 healthy subjects and 150 subjects with diabetes type II who referred to Yazd central laboratory. Then the association of rs1617640 SNP with complications among diabetic patients were examined by ARMS-PCR method. The results were analyzed using GraphPad software (version 5.00). Prevalence of genotype GG was 8% in patients and 1.3% in the control group. GT was 51.3% in patients, and 86.7% in the control group, and finally TT was observed in 40.7% in patients, and 12% of control group. The TT genotype was 37.6% in patients with retinopathy and 42.6% in non-retinopathy patients. Our study demonstrates that the prevalence of rs1617640 SNP has significant difference between diabetic patients and control group; whereas there was not any significant relationship between this polymorphism and the complications of diabetes in patients. Together our study reveals that rs1617640 SNP may be associated with susceptibility to diabetes type II; however it seems that this polymorphism is not significantly related to the diabetic complications in Yazd.

Diabetes mellitus is a metabolic disease caused by hyperglycemia resulting from defects in insulin secretion and/or insulin action. Based on WHO report, prevalence of diabetes would increase to 366 million people by the year 2030 (1, 2). Although the prevalence of both diabetes types I and II are increasing dramatically but diabetes mellitus type II shows higher growth rate (over 90% of diabetes). Diabetes as a multifactorial disease is caused by environmental and genetic factors. Complications of diabetes include micro vascular damage (including retinopathy, nephropathy and neuropathy) and large vascular injuries (e.g. stroke, coronary artery disease, and peripheral vascular disease).

So far, several genomic studies have identified genes associated with type II diabetes, however determining the exact gene or genes involved in diabetes type II has not been possible. A plethora of studies demonstrated that more than one locus are involved in diabetes type II (3). Erythropoietin (EPO) is a protein signaling molecule (cytokine) which targets erythrocytes precursors in the bone marrow stimulating erythropoiesis (4). EPO is produced by adult kidneys and fetal liver (5). In general, EPO activities are linked to angiogenesis, cardiovascular protection, anti-inflammatory as well as regulation of cellular energy metabolism. This latter function has been recently discovered (6-8). Microvascular complications including Proliferative diabetic retinopathy (PDR) and end stage renal disease (ESRD) are increased in patients with diabetes mellitus. Case-control association studies have demonstrated that rs1617640 SNP in the promoter of EPO gene is significantly associated with PDR and ESRD. rs1617640 G > T polymorphism in the EPO gene promoter increases EPO expression in mRNA and consequently protein level. Various studies investigated the association of this polymorphism with diabetes in different populations worldwide (1, 9-11). In this study we investigated the existence of rs1617640 EPO gene polymorphism among 150 healthy individuals and 150 individuals with diabetes type II who referred to Yazd (an Iranian province) central laboratory.

In this study we utilized samples received from 150 patients (between 35 - 65 years old) with diabetes type II (all patients had at least 5 years history of diabetes at Yazd Central Laboratory Yazd Iran) and 150 normal subjects (between 35 - 65 years old). All normal subjects did not have family history of diabetes, genetic diseases, infertility or autoimmune diseases. All individuals provided informed consent before participation. All case and control individuals were originally from Yazd province.

Single nucleotide polymorphism rs1617640 (G > T) is in position 1.125 bp upstream of the transcription start site of the EPO. After determining the purity and quality of DNA by evaluating absorbance of extracted DANs at 230, 260 and 280nm with spectroscopy, ARMS-PCR method was performed on the samples using the ABI thermocycler instrument (Applied Biosystem, USA). The sequences of primers are depicted in Table 1.

Table 1. Sequence of the Primers Used for ARMS-PCR

Investigating the existence of rs1617640 polymorphism in the two study groups (patients with diabetes and normal individuals) revealed following results.

3.3. The Frequency of Allelic and Genotypic rs1617640, Associated with Complications Among Case Groups (Diabetics)

3.3.1. Association of rs1617640 and Retinopathy Development in Diabetic Patients

3.3.2. Association of rs1617640 and Nephropathy Development in Diabetic Patients

3.3.3. Association of rs1617640 and Neuropathy Development in Diabetic Patients

Erythropoietin is a protein coding gene which finally encodes a multifunctional cytokine glycoprotein. EPO is a potent angiogenic factor which is important in diabetes and some cancers (including breast cancer (9)). When activated in specific conditions, its angiogenic activity prevents tissue ischemia damages (12-21). Over-expression of EPO, can cause, proliferative diabetic retinopathy (PDR) and end-stage renal disease (ESDR) in diabetics (1). This abnormal expression can be the result of rs1617640 polymorphisms (G > T) in the promoter of EPO gene. Investigation of the presence of this polymorphism in different populations, have yielded different results in the development of diabetic complications, possibly resulting from racial and ethnic differences in different populations.

At the first step we investigated the frequencies of different genotypes (including GG (normal), GT (heterozygote) and TT (mutant)) between controls (150 healthy individuals without diabetes and with no family history for the disease) and patients (150 with diabetes) groups. Results showed that the TT mutated genotype has significantly higher rate in diabetic patients.

Taken together our results show that although the TT mutated genotype has significantly higher rate in diabetic patients compared to normal individuals; there is no significant relationship between this polymorphism and some of diabetic complications (P > 0.05) in patients with diabetes type II from Yazd province.

We would like to thank all the patients and controls for participating in this study; in addition we thank all the staff of Yazd Central Lab for their kind cooperation.

Copyright © 2017, Journal of Human Genetics and Genomics. This is an open-access article distributed under the terms of the Creative Commons Attribution-NonCommercial 4.0 International License (http://creativecommons.org/licenses/by-nc/4.0/) which permits copy and redistribute the material just in noncommercial usages, provided the original work is properly cited
download pdf 103.77 KB Abstract XML Get Permission (article level) Import into EndNote Import into BibTex
Number of Comments: 0