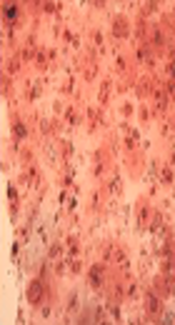 Chronic exposure to benzene or its derivative (benzoquinone and hydroquinone) in humans may result in bone marrow damage followed by development of leukemia. Induction of extra cellular signaling pathways in microenvironment of bone marrow of patients with acute myeloid leukemia (AML) may lead to progression of disease and treatment resistance. Mesenchymal stromal cells (MSCs) are a subpopulation of multipotent cells of non-haematopoietic origin. They are increasingly recognized as a central component of the bone marrow (BM) microenvironment that contributes to the structure and function of the BM niche. MSCs play significant roles in regulation of homing, self-renewal, differentiation, and proliferation of hematopoietic stem cells (HSC) through production of various crucial elements in hematopoietic niche. Niches are local tissue microenvironments that maintain and regulate stem cells. Previous studies have shown that benzene is one of the important risk factors for AML.

This study aimed to evaluate the effect of low doses of benzoquinone on the expression levels of some hematopoietic function related genes including CXCL12 and Kit ligand (KITLG) in MSCs.

MSCs obtained from bone marrow mononuclear cells of healthy volunteer and cultured in the proper medium. After characterization with standard methods, MSCs were exposed to two doses of 5 and 10 micro molar (µM) of benzoquinone; then, the expression of KITLG and CXCL12 genes were evaluated by real time PCR method.

The results indicated that the expression of KITLG and CXCL12 genes were increased after treatment with benzoquinone, specifically with 5 µM dose.

The results of our study along with well-established role of KITLG/SCF signaling pathways and the CXCL12-CXCL4 axis in maintenance of the niche and cancer development, benzene metabolite, benzoquinone, is among the major factors in causing acute myelogenous leukemia.

For nearly two centuries a set of diseases termed leukemia has been under intense investigation at both lab bench and the bedside. Currently, a vast effort has been made for understanding how exposure to a variety of chemicals, similar to ionizing radiation, may result in impaired bone marrow function resulting in abnormal blood cell formation or malignancy. Particularly considerable efforts have been made to study the toxic effects of benzene and its derivatives. Benzene, a volatile aromatic solvent, is a well-established cause of acute myeloid leukemia (AML) and myelodysplastic syndromes (MDS). It is also suggested that it is potentially be associated with lymphocytic leukemias and non-Hodgkin’s lymphoma in humans (1, 2). It is a widely used industrial chemical; thus workers exposed to benzene are at significantly high risk of developing acute myeloid leukemia. Benzene is also present in petrol, exhaust fumes, and is produced in the burning of tobacco, resulting in the potential leading to wide human population exposure (3).

Benzene is metabolized in the liver by cytochrome P4502E1 (CYP2E1) to its primary metabolite phenol through the non-enzymatically rearrangement of benzene oxide intermediate. Phenol is subsequently conjugated either to a sulfate or glucuronide or hydroxylated to catechol, hydroquinone and 1, 2, 4-benzenetriol. These polyphenolic metabolites are believed to be transferred to the bone marrow and subsequently oxidized to highly toxic quinones by myeloperoxidase (MPO), which may have hematotoxic and leukemogenic effects (4, 5). The conversion of hydroquinone to 1,4-benzoquinone is suggested to be the main reason of benzene toxicity (6). NAD(P)H:quinone oxidoreductase1 (NQO1) is another peroxidase present in bone-marrow. NQO1 can reduce quinones to more stable hydroquinones, which are excreted faster, are not electrophilic and do not undergo redox cycling (7).

The ratio of MPO to NQO1 may therefore represent a bioactivation/detoxification balance that could influence the susceptibility of a cell to toxicity induced by the phenolic metabolites of Banzene.

The findings of cellular studies have suggested that the levels of MPO and NQO1 modulate the toxicity of phenolic metabolites of benzene especially in heterogonous cell populations such as stromal cells where multiple cell types with varying enzyme activities exist (8, 9). In this regard, it can be concluded that the combination of NQO1 and MPO levels represents a potential measure for prediction of the relative susceptibility of different cell types to the phenolic metabolites of benzene.

The bone marrow progenitor compartment (CD34+ cells) is responsible for self-renewal and generation of virtually all linages of hematopoietic cell. For instance CD34+ cells isolated from human bone marrow contain high level of MPO but no detectable levels of NQO1 suggesting that they would be susceptible to phenolic metabolites of benzene. Certain phenolic metabolites of benzene have been indicated to induce apoptosis in human CD34+ bone marrow cells. Depletion of CD34+ represents a potential mechanism underlying benzene-induced aplastic anemia. Of further interest is that AML, which develops after chronic exposure to benzene, is often preceded by pancytopenia or aplastic anemia (10).

MSCs are known to be the fundamental participate in the formation of niches for HSC; thus, playing a considerable role in niche structure and regulation of HSC homing, self-renewing, proliferation and differentiation (11, 12). The results of experimental animal models have showed that MSCs are capable of secreting cytokines that support haematopoiesis and promote engraftment of HSCs (13, 14). Considering the significant role of MSCs in haematopoiesis, investigating the effect of benzene on these cells potentially aids to better reveal the mechanism of toxicity of this agent.

The interactions between CXCR4 and CXCL12 (SDF-1) are important in the localization and retention of HSCs and progenitor cells.

Ten mL bone marrow was aspirated from 22 years old male and was preserved in heparin. The cells were kept in 10 mL DMEM; 5 mL of which was layered on top of the phycole and centrifuged at 450 g for 10 minutes. After centrifuging, the region of between Faikol layer and plasma was collected with a sterilized pastor pipette; then, cells were suspended in 5 mL DMEM in T25 flasks. Cultured cells kept in an incubator at 37°C and 5% O2. After 48 hours, the medium was changed to remove the suspended HSCs. Three days after primary culture, MSCs adhered to the plastic surface and presented a small population of single cells. The cells were mono nucleus with spindle shape. Fourteen days following initial plating 80% of the cells had attached to the culture dishes and gained MSCs morphology.

The third passage of bone marrow derived MSCs were analyzed by flow cytometry using antibodies for CD105, CD45 and CD34.

After third passage, 1 × 105 cells were cultured in 6 well plate. After 4 days, at 80% - 90% confluency the differentiation media (dexamethasone, beta glycerol phosphate, ascorbic acid) was added. The media was changed every 3 - 4 days for 21 days. Then the osteogenic differentiation was evaluated using Alizarin Red S staining. The monolayer of cells in 6 well plate were washed by PBS twice and then were fixed by 10% paraformaldehyde. Fixed cells were stained by Alizarin Red for 10 minutes. The formation of osteogenic matrix was observed by invert microscope (Figure 1). The second passage of isolated cells were treated with benzoquinone at doses 5 and 10 µM. Then the RNA was extracted using Trizol base method. The quantification of RNA was evaluated using agarose 1.5% gel and nano-drop spectrophotometer. The possible DNA contaminants were eliminated using DNAse1 prior to cDNA synthesizes. cDNA was synthesized using Bioneer kit according to instruction. The target genes, CXCL12, KITLG and GAPDH as control were amplified using Fast Start Syber Green Master Mix (Roche). The primers are described in Table 1. The relative expression of genes were evaluated using 2-ΔCt.

The data were analyzed using One-way ANOVA and t-test.

The results of flow cytometry analysis showed that 99.2% population of isolated cells express CD105; besides, the expression of CD45 and CD34 were indicated in 3.77 and 2.07% of the cells respectively. This shows that the isolated cells are homogenous and lack the epithelial cells of any kind of other cells. Thus, the characterization of MSCs was identified. In confirmed the Alizarin Red staining of cells indicated that the isolated MSCs have the ability of osteogenic differentiation (Figure 1).

Our finding showed that treatment of MSCs with 5 µM benzoquinone led to significantly higher expression of KITLG in these cells compared to control, which is in agreement with our previous work (15). The SCF/C-KIT pathway is involved in controlling proliferation and viability of HSCs. KITLG is a ligand expressed by bone marrow derived MSCs and osteoblastic niche. Knockout or dysregulation of KITLG in mice showed to result in death and marrow suppression. This pathway is also involved in release of HSCs from bone marrow niche. Upon activation of matrix metalloprotease 9, the KITLG released form the cell membrane into the cytoplasm; following that it leads to entry of HSCs into cell cycle and their migration to bone marrow arteries. Yamazaki et al. in their study indicated that the expression of KITLG is increased in patients with renal carcinoma (16).

In current study, reduction of KITLG expression in MSCs treated with 10 µM benzoquinone compared to 5 µM dose suggests that benzoquinone has toxic effects on MSCs. In 10 µM concentration of benzoquinone significant changes were observed in KITLG expression as well as cell cycle, both of which playing roles in cell proliferation homeostasis.

Our findings showed significantly higher expression of CXCL12 in cells treated with 5 µM dose of benzoquinone compared to controls. Differences in study methods or samples may explain the difference in our findings with other previous studies. However, our findings were in accordance with the study by Zolghadr et al. (15).

4.3. Effect of Increased Expression of KITLG and CXCL12 on Bone Marrow Niche

Hematopoietic stem cells and their progeny are located in stroma of bone marrow, which provide a protective niche for them. MSCs are located in bone chambers and have the potential to be differentiated into different bone marrow lineage cells including chondrocytes, osteoblasts, fibroblasts, adipocytes as well as endothelial and myoblast cells. It is well understood that there is a close association between hematopoiesis and ossification. By differentiation into the cells that regulate the bone marrow niche (including osteoblasts, nestin + cells an CAR cells) MSCs play important role in hematopoiesis (17). These stromal cells provide mechanical support and produce signals and secretion that are essential for commitment and differentiation of hematopoietic cells.

The term “niche” was first introduced in 1978, referring to the microenvironment of bone marrow. It is well established that the hematopoietic stem cells are in close contact with bone and regulate the proliferation and differentiation of SCF (KITLG)-C KIT and CXCL-12-CXCR4 signaling pathways play essential role in HSCs function in bone marrow niche. It is suggested that the gradient of SCF and CXCL12 concentration guide the HSCs homing.

Increase expression of these genes seems to be corrected with higher attraction and adhesion of HSCs to hematopoietic niche. However, reduction of CXCL12 expression leads to reverse effect. Thus, a change in expression of CXCL12 and KITLG potentially leads to dysregulation of niche of bone marrow stem cells that may lead to leukemia.

According to the well-recognized role of KITLG and CXCL12 in regulation of bone marrow niche, our findings suggest that exposure to benzene and its derivatives can be carcinogen even in low doses. It is noteworthy to mention that as the benzene exposure exert its carcinogenic effects through dysregulation of target genes, the genetic background of exposed person may have impact on his response.

Copyright © 2018, Journal of Human Genetics and Genomics. This is an open-access article distributed under the terms of the Creative Commons Attribution-NonCommercial 4.0 International License (http://creativecommons.org/licenses/by-nc/4.0/) which permits copy and redistribute the material just in noncommercial usages, provided the original work is properly cited.
download pdf 2.23 MB Abstract XML Get Permission (article level) Import into EndNote Import into BibTex
Number of Comments: 0