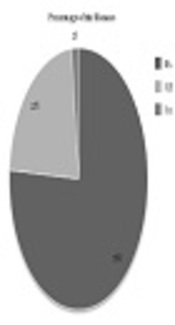 Depression is a major disabling factor around the world. Most of the mental disorders immediately affect the inner mood and cognitive aspect of individuals. Therefore, hiding the depression can delay the early diagnosis and, consequently, a proper treatment in the patients.

We designed the study to determine the association between rheumatoid diseases and depression.

This is a descriptive - analytic study which was performed on 354 patients referred to Rheumatology Clinic of Ahvaz, a province in south west of Iran in 2016. Then demographic information, depression, quality of life and social support were completed based on standardized questionnaires filled by the patients.

Mood is an emotional state that affects the perception of the world in the individuals. Mood disorders include a wide range of disorders, which constitute the pathological mood and related disturbances of the dominant clinical features. These disorders were identified as “affective disorders” in some previous versions of the diagnostic and statistical manual of psychiatric disorders (DSM), but later the term “mood disorders” was preferred. Mood disorders can best be described by syndrome (rather than as distinct diseases). Because these disorders are grouped from signs and symptoms that might last weeks to months; the symptoms have a marked difference in thenormal function of the individual; they are usually recurrent, and often a periodic or cyclic pattern exists. The mood may be normal, elevated, or depressed (1). Rheumatoid arthritis (RA) is a common and chronic disease that affects 0.8% of the population (2). Recent evidence showed that the prevalence of depression in patients with SLE is approximately 47% - 11.5% compared to the normal population and the severity of depression and exacerbation of SLE rises the depression among SLE patients (3). Systemic sclerosis (SSc) is an autoimmune connective tissue disorder that is diagnosed by the fibrosis of skin, internal organs including the heart, lung, kidney, and digestive system and vascular demyelination. SSc can cause several painful symptoms, including endodontic ulcers, Raynaud’s phenomenon, skin clefts, joint contraction and gastro-esophageal reflux (4).

In this study: firstly, determining the prevalence of depression in common rheumatic diseases, so that, due to the importance of depression in these patients, psychiatric disorders can be detected early and suitable remedial measures can be done faster. The result can be useful in clinical management, and secondly, to find the association between depression and personality traits, quality of life, social support, and the characteristics of these diseases and the rheumatologist will pay special attention to these complications and determine the risk of depression factors in rheumatologic patients.

The study population was the patients who referred to the rheumatology clinic of Golestan Hospital of Ahwaz in 2016.

Inclusion criteria: all patients were selected based on the American College of Rheumatology (ACR) criteria by a rheumatologist. The minimum age for the patients was 10 years.

Exclusion criteria: patents with coexisting disease that affects the main disease such as infections or heart disease, respiratory tract, gastrointestinal tract, nervous and ganglia diseases, patients with severe cognitive impairment, patients with significant hearing impairment, the lack of communication skills to ensure the test scores validation, patients who were illiterate.

Commonly we used questionnaires such as PHQ-9, PHQ-2, BDI-PC and WHO-5 for screening depression (5, 6).

Depressed mood is a key symptom of depression. The patient may say that he feels sad, desperate, or unprotected. About two-thirds of all depressed patients are considering suicide and about 10% -15% of them commit suicide. Almost all depressed patients (about 97%) are lagging behind their energy, which makes them unable to perform their duties easily, disrupts their academic and occupational skills and motivation to accept the new plans. Other vegetarian symptoms of depression are menstrual irregularity and reduced sexual interest and function.

Patients with depression syndromes may refer to the physician with neurovegetative, cognitive, and physical symptoms. Dementia includes mood, emotional discomfort, emotional numbness, and sometimes anxiety or irritability. Neurovegetative symptoms include: loss of energy, change in sleep, appetite or weight. Some patients are more likely to experience physical symptoms (headache, abdominal or pelvic pain, back pain or other physical complaints) that can disturb depression. Pregnant women, elderly people, prisoners, some ethnic minorities, and low-income patients are often overwhelmed by physical symptoms.

In assessing a patient suspected of depression one must particularly seek information regarding:

2. Considering thoughts about depression in the patient.

Chi-square tests were used to compare the prevalence of depression in three diseases as well as the correlation (α = 0/05) and the statistical analysis were done by the 22nd version of the SPSS.

This work was done under ethical considerations of Ahvaz Jundishapur University of Medical Sciences.

A total of 305 individuals entered the study out of the 354 participants according to inclusion and exclusion criteria. The mean age of the participants was 42.35 years, the minimum age was 12 and the maximum 80 years in the study, which was related to RA disease. 305 patients were female and 14.4% (44 patients) were male, indicating that most participants in this study were female. The mean of the disease period was 5.23 years, with a minimum of 1 year and a maximum of 42 years. Regarding education, 16.1% (49 patients) were illiterate, 25.6% (78 patients) were under diploma, 33.1% (101 patients) had a high school diploma, 25.2% (77 patients) had higher than diploma education, which indicates that most participants education were diploma education (see Figure 1). Frequency of education in all patients Frequency of disease type in the all patients

The percentage of the quality of life in all patients Depression can be associated with other medical problems, such as diabetes, heart disease, cancer, RA and many other diseases. The relationship between depression and diseases is complicated. Depression can be worsened when with medical problems, while it also can increase physical disease. Depression makes difficulties for the patient to manage his disease. Many biological, psychological, and social factors can interact with the development of depression (7). Serotonin monoamines, noradrenaline and dopamine are the main neurotransmitters in modulating the mood and behavior. Dysfunction in serotonergic and noradrenaline neurotransmitters and respectively dopamine decrease in depression. Anti-depressants that target serotonin and norepinephrine improve depression symptoms so there is a link between the interstitial nerves and depression. Dysfunction of other neurotransmitters such as gamma-aminobutyric acid (GABA) and glutamate, are also associated with depression. All of these neurotransmitters have a massive effect on the frontal cortex. Although functional impairment has been shown in the transmission of monoaminergic neurotransmitters in depression, it is not completely clear how this dysfunction develops in the nervous system (8, 9). In a study by Sruamsiri et al. 500 RA patients with demographic characteristics were studied, 176 patients (35%) had depression symptoms but only 25 (5%) were officially diagnosed or physician visits them due to depression (10). In the study done by Yilmaz et al., the prevalence of depression was reported 39.4% in RA patients (11), other studies of the prevalence of depression in RA patient by da Costa et al. (12), and Mella et al. (13) were reported 33.7% and 53.2% respectively. Raafat et al. reported a study on of 50 SLE patients, 64% (32 patients) had showed one major symptom of depression according to depression questionnaire, while in the control group, 36% (16 out of 50) showed depression symptoms (14). Schoenherr et al. reported that depressed mood correlates with the type of medicine taken by patients, for example corticosteroids increase the depression and this is consistent with our results. Therefore, physicians should consider depression among RA patients (15).

5.1. Implication of the Study

We wish to all our collagenous in Ahvaz Jundishapur University of Medical Sciences.

Copyright © 2019, Jundishapur Journal of Chronic Disease Care. This is an open-access article distributed under the terms of the Creative Commons Attribution-NonCommercial 4.0 International License (http://creativecommons.org/licenses/by-nc/4.0/) which permits copy and redistribute the material just in noncommercial usages, provided the original work is properly cited.
download pdf 197.62 KB Get Permission (article level) Import into EndNote Import into BibTex
Number of Comments: 0