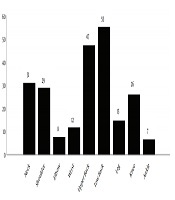 Manual load lifting is one of the most important risk factors for musculoskeletal disorders, including occupational low back pain. These disorders are common in women workers who perform manual load lifting and displacement tasks at the workplace.

The results of the prevalence assessment of musculoskeletal disorders showed that most of the musculoskeletal disorders were in the low back (55%) in the past 12 months. The results of the assessment of the allowable lifting limits also showed that 8% of women in the WISHA checklist method and 31% in the ACGIH TLV method were at risk for low back injuries. The kappa coefficient test (0.031) also showed that there is a poor and insignificant agreement between the two methods of WISHA checklist and ACGIH TLV in determining the allowable limits for manual lifting.

The results of this study showed a poor agreement between the WISHA checklist and ACGIH TLV in determining the allowable limits for manual lifting, which suggest that the two methods are not mutually exclusive. Hence, owing to the increasing presence of women in various occupations and raising the hand load-lifting and, naturally increasing occupational low back pain among them, it is necessary that in a comprehensive study, the allowable limits of lifting loads according to anthropometric and physiological characteristics of Iranian women, prepare and compile according to a comprehensive instruction.

Manual handling activities include lifting, lowering, pulling, pushing, which, despite extensive technological advances in various production processes and industries, and even in non-occupational and non-productive matters, have remained unchanged. Moreover, manual movement commodity and load lifting occur frequently (1, 2). Manual handling activities are of particular importance due to fatigue, musculoskeletal disorders, work losses, reduced productivity and safety, increased absenteeism, and increased work accidents. Musculoskeletal disorders caused by manual handling include acute and severe physical injuries in the low back, shoulder, and arm areas, which can cause long-term pain, disability, financial losses, etc. (3, 4). Manual load-lifting has been proven to be one of the occupational risk factors for low back diseases (5). According to the estimates by the National Institute for Occupational Safety and Health in the United States annually, about half a million workers suffer from varying degrees of low back injuries. In this regard, manual load lifting accounts for 60 percent of compensations caused by these injuries (6). In Iran, epidemiological and biomechanical studies show that the prevalence of low back pain in heavy and light occupations is high, and many studies have reported a prevalence of occupational low back pain between 60% and 70%, of which manual load lifting is one of the main reasons (7-12). Manual load lifting is a detrimental risk in the workplace for women who are involved in occupational or accidental handling activities in their work environment, which requires identifying, evaluating, and assessing the risk factors associated with it, and minimizing the effects and damage caused by it. A study in Canada reported that 10% of the country’s workforce was exposed to musculoskeletal disorders in the low back. The prevalence of low back pain in men was 7.6%, while in women, it was 11.3%, and this indicates a higher prevalence of these disorders in women than men (13). The main reasons for this difference are women’s physical strength, anthropometric and physiological dimensions (14). Studies have shown that lower muscle strength, anthropometric dimensions, and hormonal changes make women more prone to musculoskeletal disorders than men (15). Various methods have been developed by various organizations to assess the allowable limits of manual lifting. Among the available methods, Washington Industrial Safety and Health Act (WISHA checklist) and American Conference of Governmental Industrial Hygienists Threshold Limit Value for manual lifting (ACGIH TLV) methods, the standards used in the manual load lifting regulations in Iran, have been introduced. The ACGIH TLV standard was used as the allowable manual load lifting limit Until 2017, and now the WISHA Checklist standard used.

Owing to the high prevalence of occupational low back disorder among women workers and since no study has been conducted to assess the risk of manual load lifting according to Iranian standards among women, the present study aims to assess the overlap and reliability of the results of WISHA checklist and TLV ACGIH methods in estimating the risk of women’s low back disorder were performed in manual load lifting activities.

This cross-sectional study was conducted on 100 women workers who were involved in manual load lifting in the chain stores in 2018. The research inclusion criteria included healthy women workers without age limit and having at least 1 month of working experience. The research exclusion was people with musculoskeletal problems or a history of lumbar surgery. The work environment and workstations of the workers were visited, and in addition to the interviews, their work situation was observed. Each worker worked at their workstation for 10 to 15 minutes, and the evaluation process was carried out.

This questionnaire was used to collect the required information from each participant and included two sections: (1) Demographic information, including age, weight, height, job position, level of education, marital status, tenure, duration of work shift, smoking, and chronic disease; (2) general prevalence of Nordic musculoskeletal disorders questionnaire (NMQ) to assess the prevalence of discomforts in different parts of the body (16).

WISHA technique has been introduced in recent years based on the allowable limit recommended for manual load lifting. This computational method is based on the recommendation of the Washington State Department of Labor and Industries known as WISHA. The needed variables include the desired load weight, position of hands relative to the load lifting site, the frequency in a minute, and the shift and bending angle. In this method, the acceptable weight of manual lifting is determined. Then, it is compared with the desired weight of manual lifting. If the weight of the load lifted by an individual exceeds the acceptable value of WISHA, it means that the person is at risk for low back injury. If the load lifting activity involves lifting the load with different weights, the criterion for evaluating is the maximum load weight and the worst physical condition when lifting the load also the evaluation for the most repetitive mode and the most common working conditions. The steps for performing this method according to the checklist are as follows:

1) Determining the weight of the lifted load in kilograms.

2) Figure 1 of the checklist shows the area where the lifting and lowering of the load begins, and the appropriate weight is selected.

Figure 1. Prevalence of musculoskeletal disorders in the last 12 months in the studied women

3) Owing to the frequency of lifting the load and the duration of the lifting activity during a shift, one of the coefficients of Table 1 of the checklist is selected.

5) The numbers obtained from steps 2, 3, and 4 are entered into the following formula, and the load lifting limit is obtained in kg:

The allowable weight is compared to the weight of the load. If the load lifted by the person is greater than the acceptable value of WISHA, it means that the person is at risk of lumbar injury (18).

The results obtained from the Nordic Questionnaire: Table 2 shows the demographic characteristics of the 100 women workers studied. Moreover, 66% of those who were surveyed had at least one symptom of musculoskeletal disorders in the past 12 months before the study began. The mean age, weight, height, tenure, and work time in the two groups with musculoskeletal disorders and without musculoskeletal disorders. Statistical analysis showed that there was a significant difference between the mean age (P = 0.015), weight (P = 0.033) and tenure (P = 0.00) in both groups (P < 0.05). However, no differences were observed between the mean height (P = 0.214), working time (P = 0.272), marital status (P = 0.156) and literacy level (P = 0.127) (P > 0.05).

Figure 1 shows the prevalence of musculoskeletal disorders in different areas. Low back disorders with a frequency of 55%, upper back with a frequency of 47%, and neck with a frequency of 31% had the highest frequency, respectively. According to the WISHA checklist, 8 % of all participants lift loads above the allowable weight of the WISHA and are at risk of low back injury, and 92 % of Participants lifting weights less than the allowable load (Figure 2). The TLV ACGIH results showed that 31% of all participants lifted unallowable weight and were at risk, and the other 69% lifted allowable loads. According to Table 1, there is a poor correlation and agreement (kappa coefficient = 0.031) between the results of the two ACGIH TLV and WISHA methods.

Figure 2. The frequency of allowable and unallowable cases is based on the evaluation method

The authors of this article appreciate the cooperation of the owners of the chain stores under study, as well as all the women workers participating in this study.

Copyright © 2020, Jundishapur Journal of Health Sciences. This is an open-access article distributed under the terms of the Creative Commons Attribution-NonCommercial 4.0 International License (http://creativecommons.org/licenses/by-nc/4.0/) which permits copy and redistribute the material just in noncommercial usages, provided the original work is properly cited.
COMMENTS