Candida albicanss has been introduced as one of the most common causes of nosocomial infections. Molecular typing methods are powerful tools in epidemiology to investigate the infection source of candidiasis, identify the transmission routes, and control the measures.

This study aimed for genotyping C. albicans species isolated from oral cavities of the non-HIV patients who suffer from oropharyngeal candidiasis via combined ABC and repeat sequences (RPS) typing systems.

In this study, 31 DNA samples of clinical isolates of C. albicans were evaluated in terms of 25s ribosomal DNA region sequence or ABC typing, and ALT repeats numbers within RPS. DNA was amplified in two separate reactions, and the PCR products were electrophoresed to identify the genotypes of the isolates. Based on the band's pattern, phylogenetic analysis was conducted by UPGMA, and the discriminatory power of ABC and RPS typing was measured by Simpson’s index of diversity.

This study showed that 25s rDNA and RPS typing is a quick, simple, and cost-effective method with average discriminatory power and good reproducibility for C. albicans genotyping. It can be used for the epidemiology of C. albicans infections.

The incidence of Candida-induced infections has increased worldwide with high mortality rates in immunocompromised patients. These highly-prevalent yeasts, as a symbiotic microorganism and opportunistic pathogen, are responsible for a wide range of superficial, cutaneous, mucosal, and systemic infections (1). Recently, Candida has been introduced as the sixth most common cause of nosocomial infections (2). Candida species consists of a heterogeneous group of yeasts among which Candida albicans are known as the most prevalent species isolated from patients and healthy individuals (3-5). Despite the recent increase of non-albicans infections such as C. glabrata, C. tropicalis, the results of several studies indicate that over 80% of human infections caused by Candida species are associated with C. albicans. Studies have demonstrated that fungemia is associated with non-albicans Candida species (6-8). Moreover, mucocutaneous candidiasis is one of the most common fungal infections with C. albicans as its main pathogen. However, in recent decades non-albicans infections have increased (9, 10).

Currently, different typing methods are used to study population structure and species biodiversity, identify infection source and host-parasite relationship, determine and control the drug-resistant strains, and investigate the genetic link between the strains in epidemiologic studies. The most common typing methods are based on molecular advances, DNA fingerprinting, and genotyping. Each method should be evaluated in terms of ease of performance, reproducibility, discriminatory power, and interpretation (1). With high discriminatory power, genotyping methods are powerful tools in epidemiology to investigate the infection source of candidiasis, identify the transmission routes, and control measures (11, 12).

Ribosomal sequencing, and examining PCR products of 25s rDNA region have been frequently used in genotyping of C. albicans (13). In this method, based on the electrophoresis banding pattern, C. albicans is divided into several genotypes, including A, B, C, D, and E, among which genotype A has been reported as the dominant genotype in different regions (11, 13, 14). A study has reported that the combined analysis of 25s rDNA and repeated sequences (RPS) could increase the discriminatory power of C. albicans genotyping (10). In this method, a combination of microsatellite markers is used in strain typing within different chromosomes (15). Studies indicate that C. albicans consists of RPS in all its chromosomes except chromosome 3 (16-18). Each RPS region has a tandem short repeating unit, such as 172 bp known as ALT (16, 19, 20). The number of alternative lengthening of telomerase (ALT) repetitions in RPS differs in each chromosome, leading to diversity in RPSs fragment size (21). Consequently, subunits can be identified, which is an intriguing target for C. albicans genotyping (20). Based on the size difference of RPS and the number of copies of ALT, C. albicans is divided into four groups: Aa, Ab, Ac, and Ad. Moreover, it has been confirmed that genotype D is associated with C. dubliniensis (22, 23).

This study aims for genotyping and identifying the population structure of C. albicans species isolated from oral cavities of the patients suffering oropharyngeal candidiasis lesions based on ABC and RPS typing systems.

In this study, 31 DNA samples of clinical isolates of C. albicans were collected from patients with oropharyngeal candidiasis who went to Cancer Institute of Tehran, Tehran, Iran. Then, they were evaluated in terms of ABC and RPS genotyping systems (24). The pair primers of CA-INT-L and CA-INT-R were used.to determine the genotyping of C. albicans based on 25s rDNA region sequence. Besides, pair primers of ASDcF and pCSCR were utilized to determine ALT repetitions within RPS (17, 23). Table 1 shows the nucleotide sequence of primers and molecular size of the PCR product (11). DNA was amplified in a reaction mixture (25 µL) containing 12.5 µL of master mix (SinaClon Bioscience Co., Karaj, Iran), 1 µL (4 ng) of DNA template, 1.5 µL of a forward primer (5 mM), 1.5 µL of a reverse primer (5 mM), and 8.5 µL of distilled water. The PCR cycle parameters were as follows: initial denaturation at 97ºC for 7 min, followed by 30 cycles of 94ºC for 30 sec, 60ºC for 30 sec and 72ºC for 40 sec and final extension 72ºC for 5 min. All reaction mixtures were amplified using a thermal cycler (SimpliAmp; Applied biosystem; Cat No: A24811). Electrophoresis of the PCR product was performed using 1.5% agarose gel in TBE buffer. Band pattern of electrophoresis agarose gel was converted to a zero-one matrix.

Table 1. Characteristics of Primers for the 25s rDNA, ALT Region, and Expected Bands

Electrophoresis band pattern data was converted to zero-one matrix. Then, phylogenetic analysis was conducted by the unweighted pair group method with arithmetic averages (UPGMA) via an online tool (www.genoms.urv.cat/upgma) applied to zero-one matrix data. The discriminatory power of ABC and RPS typing was measured by Simpson’s index of diversity (25), which demonstrates the capacity of a typing method to differentiate between species. To calculate the discriminatory power, an online tool (http://insilico.ehu.eus/) was used.

Table 2. The Frequency of Genotypes Candida albicans Clinical Isolates in the Combination of the ABC and RPS Typing System, Based on the Result Genotype A3 is the Most Prevalent Genotype

UPGMA dendrogram was constructed based on the combination of ABC and RPS typing system data using online tool (www.genoms.urv.cat/upgma), as shown in Figure 1. The discriminatory power of ABC and RPS typing system using Simpson’s index of diversity was conducted through an online tool (http://insilico.ehu.eus/) (25). The results showed that the 31 clinical isolates of C. albicans were classified into 7 distinct genotypes, indicating a discriminatory power index of 0.7634. 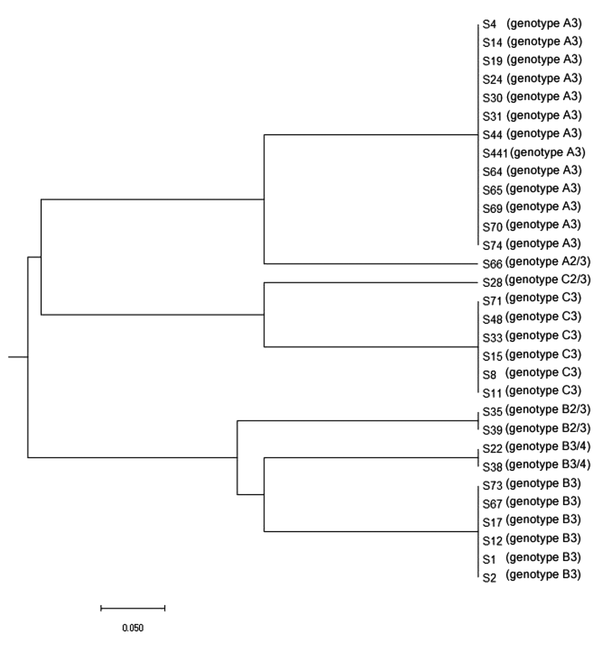 Dendrogram shows the genetic relationships between 31 isolates of Candida albicans. The dendrogram was constructed by zero-one matrix data from the combinations of ABC and RPS typing system and using the UPGMA method.

Tamai et al. (2014) investigated C. albicans strains isolated from AIDS patients via ABC typing, and reported genotype A as the predominant genotype with 66% of frequency, followed by genotype B and genotype C with 24% and 10% respectively (26). The ratio of genotypes A, B, and C is not the same in different studies due to the clinical specimens, geographical areas, and different population of patients. In addition, the band pattern obtained from RPS (ALT) typing indicated that genotype 3 had the highest frequency with 25 isolates (80.6%) followed by genotypes 2/3 and 3/4 with 4 (12.9%) and 2 (6.5%) isolates, respectively. These results are also in agreement with the previous findings (10, 11). Some studies have reported that in RPS typing of C. albicans, genotype 3, and 3/4 are the predominant clinical isolates (10, 11).

It has been reported that RPS diagnostic and typing method based on the number of sequence repetitions of RPS (ALT) can be used not only for C. albicans genotyping but also for the identification and differentiation of C. albicans from C. stellatoidea and C. dubliniensis (10, 18, 22). C. stellatoidea and C. dubliniensis are known as pathogenic species that are closely related to C. albicans (18). however C. stellatoidea and C. dubliniensis were not isolated in this study. The RPS typing system has been introduced as a simple, quick, and efficient method for C. albicans genotyping (10, 11, 20). Unlike some methods, such as RAPD-PCR, this method has a proper reproducibility rarely affected by laboratory conditions (27). The study of Iwata et al. in 2006 showed that the RPS typing system was more appropriate than PFGE for the differentiation of C. albicans strains (10). However, discriminatory power (D.P) of samples indicated that 31 clinical isolates of C. albicans via RPS typing system were divided into 7 distinct genotypes with a D.P of 0.7634, while MLST genotyping of these samples (28) showed that 31 clinical isolates of C. albicans were classified into 29 different genotypes with D.P of 0.9957, indicating a much higher discriminatory power compared to RPS typing system.

MLST is a powerful method in the genotyping of Candida species with high discriminatory power and clear results (29-32). MLST is the only genotyping method, which allows global surveillance and comparison of C. albicans, C. tropicalis, C. glabrata, C. dubliniensis, and C. krusei genotypes in a central web-based database. Thus, the possibility of epidemiological studies at the international level is provided. However, the high cost of nucleotide sequencing precludes public use of this method. In general, despite their deficiencies used in small-scale epidemiological studies, qualitative methods such as RAPD, PFGE, and RPS are affordable and time-saving, particularly for invasive nosocomial candidiasis with low sample size. Therefore, the typing method should be selected based on the purpose of study and facilities (33).

This study showed that 25s rDNA and RPS typing is a quick, simple, and cost-effective method with average discriminatory power for C. albicans genotyping and managing C. albicans infections.

Copyright © 2020, Author(s). This is an open-access article distributed under the terms of the Creative Commons Attribution-NonCommercial 4.0 International License (http://creativecommons.org/licenses/by-nc/4.0/) which permits copy and redistribute the material just in noncommercial usages, provided the original work is properly cited.
download pdf 382.56 KB Get Permission (article level) Import into EndNote Import into BibTex
Number of Comments: 0