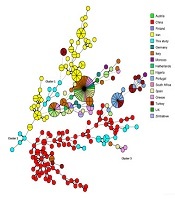 Candida glabrata is the second agent of candiduria with increased resistance to antifungals. Microsatellite length polymorphism (MLP) is one of the genotyping techniques used in the epidemiological investigation to improve clinical management.

We aimed to detect different genotypes of C. glabrata isolates using six microsatellite markers and the MLP technique. Moreover, our genotypes' association with other countries' genotypes was illustrated using a minimum spanning tree. We investigated in vitro antifungal susceptibility and enzymatic activity profiles of the isolates.

Six microsatellite markers were amplified using multiplex-PCR for 22 C. glabrata strains isolated from urine in pediatric patients admitted to the Abuzar Children's Hospital in Ahvaz, Iran. The PCR products were presented for fragment analysis, and the size of the alleles was determined. Antifungal susceptibility tests and extracellular enzyme activities were also performed.

Nineteen multilocus genotypes were detected so that 22.7% of the strains had identical genotypes. The isolates were wild-type for amphotericin B (0.0625 - 2 µg/mL), itraconazole (0.125 - 2 µg/mL), and voriconazole (0.0078 - 0.00625 µg/mL). All the isolates were sensitive to fluconazole at the minimum inhibitory concentration (MIC) range (0.0312 - 16 μg/mL), and three of them were resistant to caspofungin (MIC ≥ 0.5 μg/mL). Moreover, 72.7 and 68.2% of the isolates had no phospholipase and esterase activities. The highest potency of enzymatic activity was obtained in hemolysin and proteinase enzymes. A high genetic diversity (19 genotypes of the 22 isolates) existed among the urinary C. glabrata isolates. Based on the minimum spanning tree, two clusters of our genotypes were related to C. glabrata genotypes in a previous study in Iran, and the third cluster was entirely connected with Chinese genotypes.

Most of the isolates were the non-wild type for posaconazole but were rarely resistant to other antifungals. Hemolysin and proteinase secreted as the main virulence factors among the urinary C. glabrata isolates.

Although Candida albicans is the most common etiological agent of candidiasis, non-albicans species have recently emerged among various systemic candidiasis forms (1). The most common non-albicans species include C. glabrata, C. tropicalis, C. krusei, and C. parapsilosis isolated from systemic and vulvovaginal candidiasis (2-4). Candiduria is one of the most common challenges in hospitalized patients, including both adults and children. Many studies have reported that non-albicans species may better adapt to the urinary tract (5). For example, Harris et al. believed that C. glabrata was well adapted to substrate availability, osmolality, and urine pH (6). Hence, the C. glabrata species complex has been introduced as the second agent of candiduria (7). According to the SENTRY Surveillance Program (2008 to 2009), C. glabrata was 13.7, 5.2, 15.7, and 23.5% prevalent in the Asia Pacific, Latin America, Europe, and North America, respectively (8).

Despite developing more typing methods, limited studies have been conducted on the typing of C. glabrata isolates, and few data are available on this species' genetic diversity (9). Techniques, such as electrophoretic karyotyping, multilocus sequence typing, randomly amplified polymorphic DNA, its typing, and microsatellite length polymorphism (MLP), have been introduced for C. glabrata typing in epidemiological investigation (10). Among these techniques, MLP is attractive for population structure analysis among microorganisms. Microsatellite length polymorphism is based on short tandem repeat regions that are highly polymorphic in microorganism genomes. Limited polymorphic loci have been introduced for C. glabrata typing, including MTI, ERG3, RPM2, GLM4, GLM5, and GLM6 (11). It is believed that multilocus analysis with these markers provides a rapid, reliable, and highly discriminatory tool for epidemiological investigation.

We aimed to detect different genotypes of C. glabrata isolates using six microsatellite markers and the MLP technique. Our genotypes' association with other countries' genotypes was illustrated using a minimum spanning tree (MStree). We also investigated in vitro antifungal susceptibility and enzymatic activity profiles of the isolates.

Candida glabrata isolates were collected from urine samples of pediatric patients admitted to the Abuzar Children's Hospital in Ahvaz, Iran, during the course of the study conducted in 2019. All the isolates were initially identified based on the phenotypic pattern on CHROM agar Candida media (CHROM agar Candida, France) and under microscopic examination. For accurate identification of isolates, genomic DNA was extracted and purified according to the method proposed by Looke et al. (17). DNAs were subjected to PCR amplification with V9G (5’-TTACGTCCCTGCCCTTTGTA-3’) and LS266 (5’-GCATTCCCAAACAACTCGACTC-3’) primers (18). Then, the Cardiogenic Department of the Rajaie Cardiovascular, Medical, and Research Center, Tehran, Iran, sequenced PCR products. Nucleotide sequences were edited and aligned with Mega 6 software and blasted in the GenBank database (NCBI) with a similarity of over 99%. Finally, sequence data were deposited in NCBI, and accession numbers were received.

The isolates were genotyped using polymorphic microsatellite loci, including MTI, RPM2, ERG3, GLM4, GLM5, and GLM6. Forward primers of these markers were labeled with fluorochrome stains (FAM, HEX, and TAMRA). The multiplex reaction was performed according to the method developed by Abbes et al. (11). PCR products were analyzed using the capillary electrophoresis, and the fragment lengths were obtained using Gene Marker software (V3.0.0.0).

Specific substrates, including egg yolk, bovine serum albumin agar (Merck, Germany), tween 80 (Merck, Germany), and sheep blood (Bahar Afshan, Iran), were used for phospholipase, proteinase, esterase, and hemolysin activity, respectively, according to the study by Gharaghani et al. (18). Media were inoculated by the isolates and incubated at 37°C for one week for phospholipase, hemolysin, and proteinase activity. Esterase media were incubated at 25°C for ten days. Finally, the halo diameter and the colony diameter were measured, and the activity index of each enzyme was calculated. The enzymatic activity was interpreted based on the index presented by Price et al.: (1) 1 (negative), (2) 0.70 - 0.99 (low), (3) 0.40 - 0.69 (medium), and (4) 0.10 - 0.39 (high) (21).

3.5. Comparison of Genotypes from Different Countries

Our study applied the UPGMA dendrogram to determine the genetic relationship between the C. glabrata isolates using BioNumeric Applied math software version 7.6. (https://www.applied-maths.com/quote-request?comm=1). Besides, the discriminatory power (DP) was calculated for each locus and a combination of six markers based on Simpson's index of diversity (http://insilico.ehu.es/mini_tools/discriminatory_power/index.php). Finally, the data were analyzed using Fstat software, and the Wright Fixation index (FST) was calculated (https://www.scienceopen.com/document?vid=b577cf2d-d522-4831-a4a7-d05d435e72cf).

Table 1. The Number of Alleles and the Discriminatory Power of Each Locus

Also, the highest genetic diversity (haploid diversity) in the present study was obtained in a pediatric ward (H = 1.0, P < 0.05). It means that C. glabrata strains isolated from patients in the pediatric ward were genetically divergent from isolates obtained from patients in other wards (nephrology, neonatal intensive care, infant, pediatric mobile intensive care, neurology, and surgery wards). Moreover, the analysis of FST value between different wards showed that the FST index was lower than zero in all the cases. There was a slight difference between our genotypes with other countries. The minimum spanning tree was drawn based on differences in at least two alleles in the C. glabrata urinary isolates (Figure 1). Generally, five clonal clusters (CCs) were identified (CC1 to CC5), and isolates with identical genotypes were located in the same CC (CC5). Besides, except in CC5, there were no isolates with the same source in the other clusters. 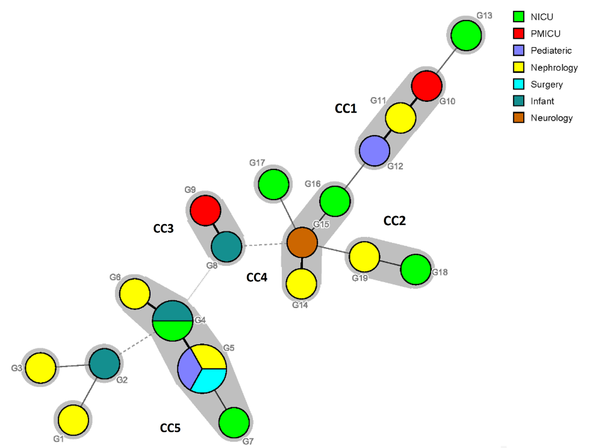 Figure 1. The minimum spanning tree showing the diversity of genotypes between different wards of the hospital. Each circle represents each genotype, and each halo surrounding each genotype represents clonal clusters (CCs). Dark, thin, and dashed lines related to one, two, or more different alleles, respectively, indicate the genetic distance among the genotypes.

4.2. Comparison of Genotypes of Candida glabrata from Different Countries

As shown in the MStree (Figure 2), two clusters of our genotypes (clusters 1 and 2) were related to the genotypes of C. glabrata isolates reported in a previous study in Iran, and the third cluster was completely connected with Chinese genotypes. 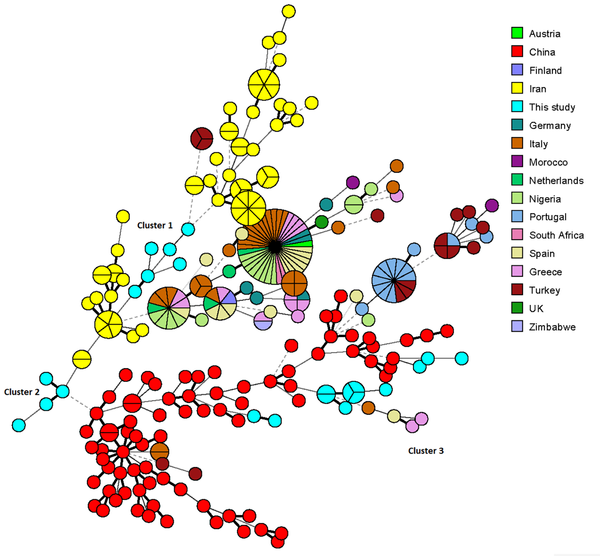 Figure 2. The minimum spanning tree representing the genotype diversity of Candida glabrata isolates in different countries. Each country is differentiated by color. Dark, thin, and dashed lines related to one, two, or more different alleles, respectively, indicate the genetic distance among the countries' genotypes.

The results of antifungal susceptibilities are demonstrated in Table 2. All the isolates were wild-type for amphotericin B, itraconazole, and voriconazole. In contrast, 77.3% of the isolates were the non-wild type for posaconazole. All the 22 C. glabrata isolates were sensitive to fluconazole, and resistance to caspofungin was observed in only three (13.6%) of the isolates. The lowest MIC range among antifungal drugs was related to luliconazole (0.0039 - 0.00048 μg/mL). Three (15.8%) of the MLP genotypes (G2, G11, and G18) were multi-resistance to posaconazole and caspofungin.

Table 2. The Antifungal Susceptibility Profile of the 22 Candida glabrata Isolates with the MIC Range, MIC50, MIC90, and MICGM

The results of enzymatic secretion patterns in the urinary C. glabrata isolates are shown in Figure 3. As shown, 16 (72.7%) and 15 (68.2%) of the C. glabrata isolates had no phospholipase and esterase activities, respectively, and the other isolates had low activity for these enzymes. In comparison, the highest potency of enzymatic secretion was obtained in hemolysin 12 (54.5%) and proteinase 14 (66.5%) enzymes.

Candida glabrata is a crucial non-albicans species with increasing prevalence and resistance to antifungal drugs (1, 25). Evaluating the diversity of molecular genotypes with antifungal susceptibility profiles of C. glabrata is an essential technique for epidemiology investigation, population genetics analysis, and clinical practice guidelines. Some researchers used the six defined markers (ERG3, MTI, RPM2, GLM4, GLM5, and GLM6) for C. glabrata analysis and reported different discriminatory powers, including 0.964 (23), 0.941 (11), 0.88 (22), and 0.84 (26). However, in our study, the highest discriminatory power was calculated to be 0.978 for the six markers.

Nineteen multi-loci unrelated MLP genotypes were detected in the 22 C. glabrata isolates, including two (10.5%) identical genotypes (G4 and G5) and 17 (89.5%) singleton genotypes. However, different studies have reported various numbers of genotypes in the form of candidiasis. For example, in a previous study in Iran, 35 different genotypes, (39.3% singletons genotypes and 60.7% identical genotypes) were identified among 61 vaginal isolates of C. glabrata. (23). Abbes et al. (11) identified 37 genotypes for 85 C. glabrata isolates originating from different Tunisia sources. Of the isolates, 69.4% and 30.6% had shared and singleton genotypes, respectively. However, we observed no similarity between Abbes et al.’s genotypes detected in urine samples and our urine isolates. According to the MStree, two clusters of our genotypes (Clusters 1 and 2) were related to genotypes of C. glabrata isolates reported in a previous study in Iran (23). However, the third cluster was entirely connected with Chinese genotypes (22). In the present study, Fst was > 0.05, and according to Abbes et al.'s study, this species has a low genetic differentiation level in different hospital wards (27). In our hospital, 22.7% of the isolates had the same genotype. Moreover, Abbes et al. (9) observed 38% similarity in the genotypes and considered interpatient transfers of isolates in the hospital essential in transmitting diseases.

In the present study, 77.3% of the C. glabrata isolates were non-wild type (MIC > 1 µg/mL) for posaconazole (22). This result is inconsistent with the study conducted by Morales-Lo'pez et al. (38) and Zarei Mahmoudabadi et al. (31), showing that 100% of isolates were sensitive to posaconazole. However, Hou et al. (22) showed that only 7.3% of C. glabrata isolates from different sources were the non-wild type for posaconazole. Zaoutis et al. (33) reported a range of 0.5 to < 16 µg/mL with MIC90 = 2 µg/mL for 15 C. glabrata isolates. The deficient range of luliconazole, 0.00048 - 0.0039 µg/mL, with MIC90 = 0.0018 in our study is comparable to that in Taghipour et al.’s study (39). In our study, no differences were found regarding antifungal susceptibility or genotype profiles among the tested isolates associated with sources of isolates, similar to the results reported by Safdar et al. (40) and Abbes et al. (9).

It was found that high genetic diversity existed among the urinary C. glabrata isolates. Moreover, based on the MStree, two clusters of our genotypes were related to C. glabrata genotypes in a previous study in Iran, and the third cluster was entirely connected with Chinese genotypes. The majority of the isolates were the non-wild type for posaconazole, but were rarely resistant to other antifungals. Furthermore, hemolysin and proteinase secreted as the main virulence factors among the urinary C. glabrata isolates.

We are thankful to the Ahvaz Jundishapur University of Medical Sciences, Ahvaz, Iran, for supporting this study.