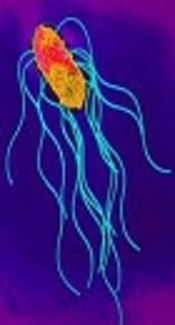 Salmonella spp. is one of the most important zoonotic pathogens transmitting among human and animals. Due to the similarity of antibiotic classes used to treat animals and humans, there is a high risk for emerging the multi-drug resistant (MDR) strains.

A total of 282 isolates were recovered from chicken meat, live poultry feces, eggs, and human feces in Iran. The presence of virulent factors in the isolates was confirmed using biochemical and microbiological tests. The presence of Salmonella genus was determined using antiserum. Triplex polymerase chain reaction (PCR) was performed to detect Salmonella spp., serogroup D and the discriminate S. enteritidis from other species. Kirby-Bauer disk diffusion method was applied to perform the susceptibility testing. Quantification of biofilm formation was determined in 96-well microtiter plates as recommended by the defined protocol. The data were then analyzed with SPSS using consensus tables and Chi-square test.

Based on the results, all the isolates were positive for invA, sdiA, hilA, and ratA. Moreover, spvC had the lowest prevalence (37.6%). Of all strains, 67% were MDR, 51.7% of which were recovered from humans. Furthermore, 34.5% of isolates were strong biofilm producers. There was a significant correlation between the strong biofilm formation and the antibiotic resistance to colistin, ceftazidime, chloramphenicol, gentamicin, trimethoprim, penicillin, and trimethoprim-sulfamethoxazole.

The results of the current study showed a significant correlation between the strong biofilm formation and the antibiotic resistance to some antibiotics.

Salmonella spp. is one of the most important foodborne pathogens and a major agent of diarrheal complications worldwide. As estimated, it annually accounts for around 1 million cases of salmonellosis and over 450 deaths in the United States (1). It is a zoonotic microorganism (2). Commonly, the main sources of Salmonella infections are contaminated food products, poultry, pigs, contaminated drinking water, ruminants, and direct contact with infected animals (3). Salmonell enteritidis is commonly associated with poultry and poultry derivatives (4). The most common typical symptoms of illness caused by S. enteritidis are fever, vomiting, diarrhea, and abdominal cramps after the consumption of contaminated food products and water (5).

In the US, amongst different species, 36% of Salmonella outbreaks resulted from S. enterica serovar enteritidis (6). Salmonell enteritidis pathogenicity is attributed to its capability to invade non-phagocytic cells and survive and grow inside macrophages and dendritic cells (7). The capability of Salmonella spp. to cause disease can be attributed to various virulence genes found in the either chromosome or large virulence-associated plasmids (8). Different virulence genes of Salmonella, such as viz, sef, pef, spv, and inv are recognized to be involved in adhesion to and invading the host cells. Other virulence genes such as mgtC are associated with the survival of the host cells, and some other genes such as viz, sop, stn, pip A, B, and D have a significant role in real demonstration of pathogenic routes (9, 10).

It seems that selection pressure resulted from the use of antimicrobial drugs promotes growth or as prophylaxis in food-producing animals likely acts as the best selective pressure to develop resistant S. enteritidis (11). Surely, animals carrying resistant microorganisms may act as reservoirs; consequently, resistant strains may be spread from animals to humans via the food chain (12). And due to the similarity of the antibiotic classes used to treat the animals and humans, there is a high risk for antibiotic resistance and forming the multi-drug resistant (MDR) isolates (13). Regarding drug resistance, the role of antimicrobial drugs misuse and overuse in the emergence of antimicrobial resistance cannot be ignored (14).

Biofilm formation is one of the characteristics of these microorganism that intensifies the antibiotic resistance dilemma (15). Nowadays, the biofilm formation on equipment and tools is considered as a source of pathogenic bacteria that increases the risk of food product contamination in food processing systems (16). Biofilms protect bacteria from being damaged by environmental agents such as disinfectants and antibiotics; therefore, the bacteria can develop antibiotic resistance that is difficult to eliminate (17). Due to the high prevalence of resistant isolates recovered from poultry and domestic animals, and the possibility of their transmission through the food chain to humans, it seems to be necessary to evaluate the antibiotic resistance and determine the relationship between biofilm formation and antimicrobial resistance.

The current study was conducted on 282 isolates including 165 isolates recovered from chicken meat, 30 isolates from live poultry feces, 31 isolates from eggs, and 36 isolates from human feces. The isolates were collected from five provinces including Tehran (n = 261), Mazandaran (n = 2), East Azerbaijan (n = 15), Qom (n = 1), and Sistan and Baluchistan (n = 3). The isolates were cultured on the TSI (triple sugar iron) agar (Himedia, India) and transferred to the Central Veterinary Laboratory of Iran Veterinary Organization (CVL-IVO) under standard conditions. Initially, several colonies were picked up from TSI, inoculated into a nutrient broth, and placed in an incubator at 37°C overnight. Afterward, the bacterial isolates were identified through culturing on xylose lysine deoxycholate (XLD) agar and Hektoen enteric (HE) agar (Himedia, India); the procedure was conducted according to ISO 6579 and Italian National Reference Centers (IZSVE) protocols. Then, Salmonella genus was determined using antiserum. Agglutination in polyvalent antisera and biochemical tests were used for final genus/species-level identification of Salmonella spp. (18). Finally, Luria-Bertani (LB) broth (Himedia, India) was used to culture the confirmed isolates.

As mentioned earlier, sdiA, spvC, ratA, lpfC, sitC, sifA, sopB, spiA, sipA, invA, and hilA virulence genes primer sequences were expected to form the desired products by mPCR technique on the DNA extracted from S. enterica serotype enteritidis isolates (22). The specificity of the primers was approved by the Blast program of GenBank database. The primers were designed using Gene Runner software and synthesized by MWG Company, Germany. The sequences of virulence genes primers are presented in Table 1.

Table 1. The Sequences of Virulence Genes Primers Used in the Current Study

For quantification of biofilm formation 96-well microtiter plates were used; biofilm formation was measured in line with a previous study (27). Firstly, 230 μL of the nutrient broth medium (Himedia, India) was poured into wells of a sterile 96-well flat-bottomed polystyrene microplate. Three wells were allocated to each sample and the negative control (wells contained broth only). About 20 μL of bacterial culture (grown overnight) was poured into each well of the microplates. Afterward, incubation of the plates was performed overnight at 35ºC. The content of the microplates was discarded; the wells were washed three times using 300 μL of PBS. Then, 250 μL of methanol was added to each well to fix the microorganisms attached to the surface of microplates. After 15 minutes, the content of microplates was taken out and air dried at 25ºC.

The microplates were stained using Gram staining with 250 μL of Crystal violet per well for 5 minutes. To wash the extra stain, microplates were put under running tap water. Finally, microplates were air dried, and about 250 μL of 33% (v/v) glacial acetic acid was poured into each well to wash the bound dye. An automated Multiskan ELX808 reader (Labsystems, USA) at 570 nm and software (Gene5) were used to measure the optical density (OD) of wells. Taking into account the optical density (OD) of each well, isolates were categorized into four groups: these groups were isolates with a weak, moderate, or without the potential to produce the biofilm. The other group included isolates with a potential of producing a strong biofilm. In brief, optical density cut-off value (ODc) was equal to the average OD of negative control plus 3 x standard deviation (SD) of the negative control. The tested isolates were categorized as follows: OD ≤ ODc: non-adherent; ODc < OD ≤ (2 × ODc): weak biofilm producers; 2 × ODc < O.D ≤ 4 × ODc: moderate biofilm producers; and 4 × ODc < OD: strong biofilm producers. The obtained results are presented as means and standard deviation (SD).

The data were then analyzed with SPSS version 16.0 (Chicago, Illinois, USA). Consensus tables and Chi-square test were used to evaluate the correlation between biofilm formation potential and antibiotic resistance. P values < 0.05 were considered statistically significant.

Genus, serogroup, and serovar were determined using triplex-PCR. The invA, tyv, and sdf genes were used to detect Salmonella genus, serogroup D, and serovar, respectively. All the tested isolates were positive for all the three genes and were identified as S. enterica serotype enteritidis (Figure 1).

4.2. Results of the Analysis of Virulence Genes in Salmonella enterica Serotype enteritidis 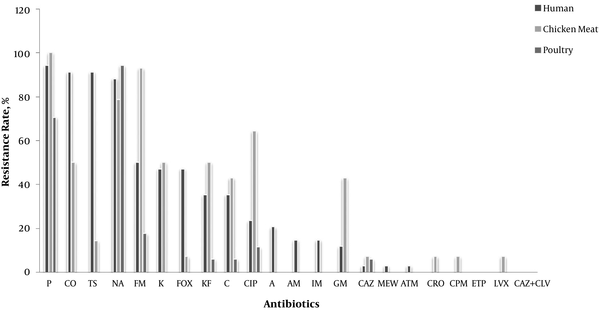 The results of virulence genes analysis showed that all the isolates (100%) were positive for invA, sdiA, hilA, and ratA. Moreover, the lowest prevalence (37.6%) was observed in spvC. In the current study, S. enteritidis isolated from poultry, chicken meat, and eggs had the virulence genes similar to the ones present in isolates recovered from human feces. The results indicated that isolates recovered from poultry, chicken meat, and eggs were human pathogens. This finding was also reported by Akiyama et al., since they stated that the isolates recovered from the environmental specimens carried the genes similar to those harbored by clinical strains, which contributed to human pathogenesis (28). In line with the current study findings, a study conducted by Mezal et al., showed that all isolates were positive for most of the virulence genes found in S. enterica (3).

In the current study, 67% of all the strains were MDR, of which 51.7% were recovered from humans and the remaining 15.3% were isolated from chicken meat and eggs; furthermore, no isolate was recovered from live poultry. Moreover, five strains were resistant to only one antibiotic, one strain was resistant to two antibiotics, and the remaining were resistant to three or more antibiotics. Nowadays, it is believed that animals and their products are the main sources of MDR Salmonella species; the resistance first emerges in animals, before transmitting to humans via the food chain (29). Surprisingly, no resistant strains were retrieved from poultry. On the other hand, the resistant strains were mainly isolated from human and partly from chicken and the eggs. This finding might be attributed to the correct administration of antibiotics for chickens. Our findings were inconsistent with those demonstrating that the increase of antimicrobial resistance amongst food-borne bacteria in the recent decades might be attributed to the selection pressure produced by the unsuitable or unrestricted use of antibiotics in veterinary medicine (30).

Overall, there was no resistance to ertapenem and ceftazidime-clavulanic acid; on the other hand, the resistance to penicillin and nalidixic acid was the most common type. Resistance to nalidixic acid in S. enterica serovar enteritidis recovered from different sources was high, and the prevalence rates were as follows: human isolates (88.2%), poultry (94.1%), and chicken/eggs (78.6%). The resistance to nalidixic acid in the current study was higher than those reported by other studies in Brazil (21.5%) and Europe (26%) (31). To the best of the author's knowledge, fluoroquinolones are widely used in veterinary for therapeutic purposes; they are also selectively used for mutant Salmonella isolates resistant to nalidixic acid or for cases with decreased susceptibility to fluoroquinolones (32, 33). As mentioned in the results section, all the isolates showed a high susceptibility to ceftazidime-clavulanic acid (100%), ceftriaxone (92.1%), ceftazidime (94.7%), and cefepime (7.1%), which may indicate the limited and controlled administration of such antibiotics in poultry and animal food products in Iran. These results were inconsistent with those reported from Turkey (34); but in agreement with the current study findings, a study conducted in Brazil showed the resistance about 88.8% to nalidixic acid (35). Also, Ghasemmahdi et al. showed the resistance (97%) to nalidixic acid (36).

In general, owing to the administration of antibiotics to improve growth and prevent diseases in food animals, the augmentation of human salmonellosis started with the emergence of foodborne MDR Salmonella (23, 38). The information acquired from various studies could be utilized to develop better strategies to eliminate biofilms in the food chain, and accordingly, reduce Salmonella contamination in animal/food chain. Furthermore, to ensure the effectiveness of control programs, it is necessary to constantly monitor antibiogram results reported worldwide.

Authors would like to thank the laboratories staff for their help with the study.