Effect of Localized Cold Compress on Pain Severity with the Subcutaneous Injection of Enoxaparin: A Randomized Controlled Trial 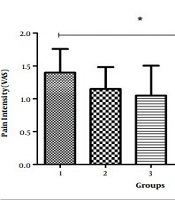 The present study aimed to evaluate the impact of topical cold compress on bruising and pain intensity at the subcutaneous injection site of enoxaparin.

According to the results, the application of local cold compress before and after the subcutaneous injection of enoxaparin sodium could effectively reduce pain intensity at the injection site.

The safe administration of drugs is a basic skill and a common intervention performed by nurses. Anticoagulants are frequently prescribed as prophylaxis or treatment agents for venous thromboembolism. The subcutaneous injection of anticoagulants often causes complications such as pain and hematoma at the injection site. Previous studies have indicated that these complications may increase the physical and psychological discomfort of the patients (1).

Enoxaparin is applied in the treatment of patients with deep vein thrombosis (DVT) and hospitalized patients with or without pulmonary embolism, as well as DVT prevention in abdominal surgeries and hip replacement associated with severe movement restrictions, prevention of the ischemic complications of unstable angina and myocardial infarction, and treatment of myocardial infarction after percutaneous coronary interventions (2, 3). Furthermore, enoxaparin is an anticoagulant with a low molecular weight, immediate effect, and long half-life. It is obtained from the de-polymerization of heparin and injected subcutaneously (4); the subcutaneous injection of heparin causes bruising and tissue injury in hospitalized patients. In general, the pain induced by subcutaneous injection causes anxiety, fear of needles, and distrust in healthcare providers in the long run (5). The rate of injection, type of drugs, and volume of the injectable drug could also affect the severity of pain. Recent findings have indicated that bruising and pain at the injection site of the mentioned group of drugs is a grave concern as aggravation may result from two different phenomena. Firstly, the insertion of a needle into the skin stimulates and damages neurons, thereby leading to the sensation of pain (6). On the other hand, the sulfate bonds in the drug exacerbate its acidic properties, increasing the sensation of pain at the injection site (7).

Safe and accurate injection is an important responsibility of nurses. Therefore, they should be familiar with appropriate and effective strategies based on scientific evidence in order to reduce potential damages and complications in hospitalized patients (7, 8). Some of these strategies include applying pressure before injection, needle cooing, injection at a specific time, and cooling the injection site beforehand or warming afterwards. In addition, nurses must have an adequate knowledge of the possible side-effects of injectable drugs.

Several studies have been focused on reducing the complications of subcutaneous injection and the pain caused by sodium enoxaparin (9, 10).

Given the importance of anticoagulant use in different patients and the undeniable topical side-effects of these drugs on patient cooperation and treatment adherence, the present study aimed to investigate the impact of topical cold application on the pain intensity of patients at the subcutaneous injection site of enoxaparin sodium.

This randomized clinical trial was conducted to assess the effectiveness of cold compress on the severity of subcutaneous injection pain in the cardiac patients admitted to Ayatollah Rouhani hospital in Babol, Iran in 2015. The patients were divided into five groups, including a control group and four intervention groups.

The sampling process was performed at the cardiac section of the hospital; initially, the researchers selected the patients who were prescribed enoxaparin 6,000 units daily. Following that, the study groups were assigned a code each, and the codes were placed in a container. At the next stage, five envelopes labeled A, B, C, D, E (intervention groups), and F (control group) were selected and provided to the patients, who were blinded to the procedures. By drawing lots from the patient code container, a piece of paper was taken out, the desired code was selected from one of the envelopes, and the intervention groups were identified accordingly. At the next stage, the specified codes were returned to the container, so that the participants would have an equal chance to choose their intervention group. The process continued until reaching the desired sample size. Following that, each group received their specific treatment. The samples were selected from the patients admitted to the cardiology and CCU wards via convenience sampling. Notably, the wards were in the same medical center and covered by a joint healthcare team. As such, the type of the provided care and environmental conditions of the wards were also the same.

Sample size was determined to be 100 individuals in five groups of 20 based on the previous studies in this regard (7). The inclusion criteria of the study were as follows: (1) age of 18 - 65 years; (2) not pregnancy/lactation during the study; (3) no previous injection at the site within 12 hours before the test; (4) full consciousness and ability to perceive and indicate pain and (5) no history of coagulation disorders (Figure 1). The patients received the same injectable dose of enoxaparin (6,000 units). The patients who were unwilling to continue participation or were discharged earlier than 72 hours were excluded from the study. 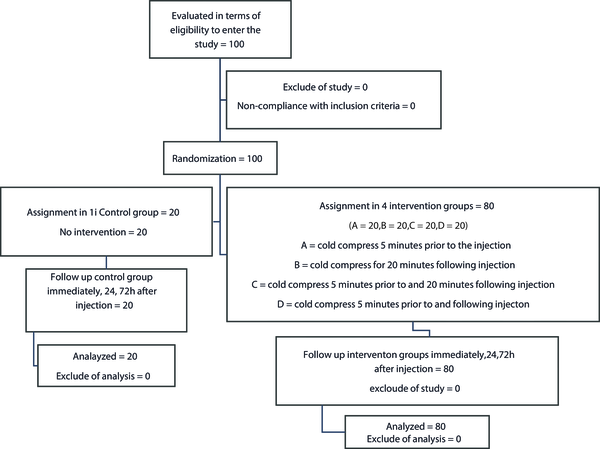 Initially, random sampling was performed by the researcher to enroll the patients, followed by examining the complications after injection. The control group received the injection without an intervention using a standard injection technique, and the injection was performed in the right or left abdomen within five centimeters around the umbilicus to the sides with no aspiration within 10 seconds without massage after the injection.

Data were collected by a trained researcher using a researcher-made checklist consisting of two sections, which were demographic characteristics (age, gender, disease type) and pain intensity assessment by VAS. This standard instrument is used to measure pain intensity within a scale of 0 - 10, and the patient is asked to rate their perceived pain. VAS is a 100-millimeter ruler, and the patient indicated the level of pain within the mentioned scale (no pain = 0, moderate pain = 1 - 5, severe pain = 6 - 10); the measured accuracy of pain severity in this scale is based on the visual aspect. Notably, the validity, reliability, and sensitivity of VAS have been confirmed in several studies for acute, chronic, and cancerous pain. Accordingly, the validity of the scale is 76 - 86%, and the reliability is reported to be 60 - 77% (10). In the present study, pain severity was measured immediately, 24, and 72 hours after the injection.

According to the descriptive statistics, the mean age of the patients was 54.66 ± 8.603 years, and gender distribution was not significant (Table 1). All the participants completed the research, and none were excluded. The results of ANOVA indicated a significant difference in the mean pain severity of the patients in the fourth group compared to the control group, while the mean pain intensity scores in the intervention groups had no significant difference with the control group (Figure 2).

Table 1. Comparison of Five Study Group Based on Age and Gender 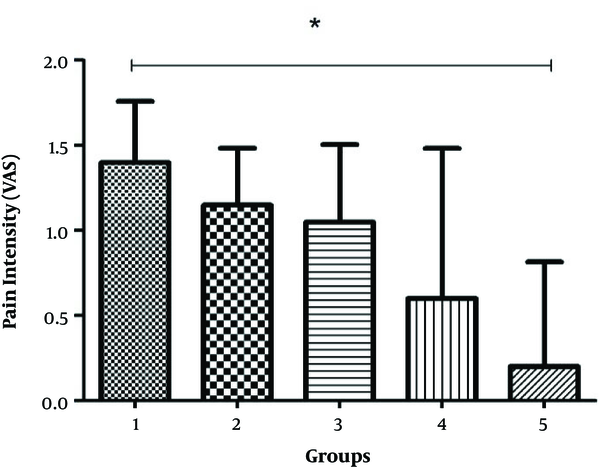 The present study aimed to compare four methods of cold compress therapy and their effect on the severity of the pain induced by enoxaparin injection at the site. According to our findings, pain severity had a significant difference between the male and female patients and was higher in the women (t = 3.39; P = 0.001) (Table 2) compared to the men, which indicated the lower pain threshold and pressure tolerance in women (P < 0.001). This is consistent with the results obtained by Soetanto (10).

Table 3. Comparison of Mean Pain Intensity in Five Study Groups a, b, c

According to the findings of El-deen, two intervention groups receiving cryotherapy had significantly lower pain intensity scores compared to the control group, which could be due to the cooling and analgesic effects of ice on the skin and the subsequent numbing sensation and pain relief (1). On the other hand, the study by Farnia et al. demonstrated no significant difference in the effects of Emla cream and cold compress on the intensity of the pain induced by enoxaparin injection. Considering the cost-effectiveness of cold compress, the use of this method is suggested for pain relief (13).

As pain is a mental concept and its expression varies in individuals based on physiological, individual, and cultural characteristics, optimal accuracy and reliability cannot be achieved in pain assessment.

According to the results, the local cold compress could reduce the pain intensity and injuries caused by the injection. In order to improve the quality of care and minimize the pain experienced by patients, our findings could be applied as a guide to decrease the adverse effects of subcutaneous enoxaparin injection and also provide training to caregivers and therapists. In addition, the incorporation of these results into clinical nursing may increase the quality of nursing practice and enhance patient satisfaction and cooperation.

Hereby, we extend our gratitude to the Deputy of Research and Technology of Islamic Azad University (Babol Branch, Iran) and all the patients for assisting us in this research project.