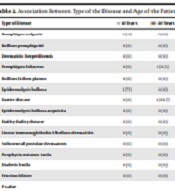 This is a retrospective cross-sectional study of 88 patients with vesiculobullous diseases referred to the dermatology clinic of Afzalipour hospital in Kerman, Iran. Demographic features of the patients, type of lesions, differential diagnosis, and pathological features (site of skin biopsy, final pathological diagnosis, type of inflammatory cells, and direct immunofluorescence results) were recorded. Data were analyzed by chi-square test and independent t-test.

Bullous diseases are clinically classified as autoimmune blistering diseases, hereditary blistering disorders, and blisters secondary to inflammation and physical trauma. Autoimmune bullous diseases are one of the most important types of acquired blistering diseases with nearly similar clinical features. They lead to mucocutaneous involvement with a high risk of mortality rate in untreated cases (1-3). Dysregulation of the immune system and production of autoantibodies against various target antigens of the skin, such as desmoglein and desmoplakin, have an essential role in the pathogenesis of these diseases (4-6). Autoimmune blistering diseases are categorized according to the blister site (subcorneal, intraspinous layer, suprabasilar, and subepidermal) and Direct Immunofluorescence (DIF) results [including the type of immunoglobulin (Ig) such as IgA, IgG, and IgM, as well as a complement (C3), site (basement membrane zone or intercellular), and pattern (granular, lace-like, or linear)] (7-9). Hereditary blistering disorders, including epidermolysis bullosa (EB), Darier disease, Hailey-Hailey disease, and porphyrias, are caused by mutations in genes involved in synthesizing structural proteins and heme (10).

This is a retrospective cross-sectional study of 88 cases with vesiculobullous diseases referred to Afzalipour hospital in Kerman, Iran, from September 2014 to December 2020. The inclusion criterion included all patients with vesiculobullous diseases referred to the operating rooms of the dermatology department for a skin biopsy. The exclusion criterion was incomplete patients' records. First, demographic features of the patients (age and sex), clinical features of the lesions (type of skin lesion, duration, and differential diagnosis), and pathological features (site of biopsy, final diagnosis, type of inflammatory cells inside the blister, and DIF results) were collected. Then, the correlation of the final diagnosis with the demographic and clinicopathological features of the cases was evaluated.

Data were analyzed by SPSS16 (IBM, Armonk, NY, USA). Prevalence, frequency, mean, and standard deviation were used for descriptive analysis. Chi-square and independent t-tests were applied to assess the final diagnosis's correlation with demographics and clinicopathological features of the cases. The Ethics Committee of Kerman University approved this study with the ethical code of IR.KMU.AH.REC.1396.1427.

Table 1. Prevalence of Vesiculobullous Diseases Based on Sex of Patients

Table 2. Association Between Type of the Disease and Age of the Patients a

Table 3. Association Between Type of the Disease and Duration of Disease and the Age of Onset

The most common vesiculobullous disease in this study was an autoimmune blistering disease, which was compatible with the Karattuthazhathu study (11). Moreover, the most prevalent intraepidermal and subepidermal bullous diseases were PV and BP, which was in line with other studies (3, 4, 12, 13). Although there was no significant correlation between the type of the disease and gender, most autoimmune blistering diseases were observed in females, compatible with other studies (3, 4, 12, 14-16).

Table 4. Comparison of the Results with Other Studies

In the current study, the lesions' most and least common clinical features were blister and pustule, respectively. In the study by Deepti, similar to this study, the most common clinical feature was blister; but in contrast to our study, the rarest one was papule (23). In the present study, lesions were more commonly observed on the upper limb and trunk, consistent with Tunisia and India studies (4, 17). Also, the most common deposited Ig was IgG, compatible with the Mittal study (18).

In the current study, neutrophils and eosinophils were the most prevalent inflammatory cells inside the blisters, which were observed primarily in patients with DH and BP, respectively (P < 0.05). Murthy et al. demonstrated that mixed inflammatory cells and eosinophils were the most frequent inflammatory cells within the blister. In the Murthy study, similar to the present study, a lack of inflammation in the blister cavity was reported in Darier disease and Hailey-Hailey disease (19). Furthermore, the correlation of clinical diagnosis with histological diagnosis varied between 64.2% and 90.90% (11, 12, 17-22). In the current study, there was a complete agreement between the clinical and final pathological diagnoses, with 73.8% concordance with the first diagnosis.

The most common bullous diseases in this study were PV, BP, and DH. Also, LAD was the rarest autoimmune blistering disorder. The most common hereditary bullous disease was EB. There was a significant correlation between the type of disease and the age of the patients and the duration of the diseases, but there was no significant correlation between types of diseases and gender (Table 4).

Copyright © 2022, Journal of Skin and Stem Cell. This is an open-access article distributed under the terms of the Creative Commons Attribution-NonCommercial 4.0 International License (http://creativecommons.org/licenses/by-nc/4.0/) which permits copy and redistribute the material just in noncommercial usages, provided the original work is properly cited.
download pdf 116.37 KB Get Permission (article level) Import into EndNote Import into BibTex
Number of Comments: 0