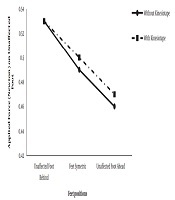 The current study aimed at investigating the effect of applied Kinesio tape on the affected ankle on the amount of exerting force by the non-affected foot in patients with chronic stroke during the stand to sit task.

The current quasi-experimental clinical trial was conducted on 26 patients with chronic stroke. The stand-to-sit task was performed in three positions (symmetric foot placement, and placing the unaffected foot ahead of the affected foot and the unaffected foot behind the affected one), and the vertical axis of the ground reaction force was recorded instantly by a force plate at three time points of 2, 5, and 8 seconds of the stand-to-sit task. Then, Appropriate taping was applied on subjects` affected ankles and all measurements were repeated.

The current study findings showed that placing the unaffected foot behind the affected one led to more force and there was no significant difference between the forces with and without using the tape.

Stroke is one of the leading causes of mortality in developed countries and disability in industrialized regions (1). Following the stroke, patients lose their balance, which is associated with asymmetry in weight distribution, postural stability, and narrower stability range. Inadequate balance leads to a reduction in the independent function of individuals and increased risk of falling (2). Change from sitting to standing position and vice versa is one of the essential activities in daily life (3), which is the basis of moving from bed to chair and chair to toilette (4); it is a fundamental requirement for walking and mobility and requires a reasonable functional ability of lower limbs and postural control (5).

Previous studies showed that the change of foot positions majorly affects the force of foot in patients with stroke during sit-to-stand and stand-to-sit tasks (6-9). The important finding is that positioning the affected foot behind improves the symmetry of vertical reaction force or both-side extension torque. Liu et al. (10), found that positioning the affected foot behind is effective in controlling balance in such patients. Most studies evaluate the sit-to-stand properties of patients with stroke (6, 7, 11-13), but few studies are conducted on stand-to-sit positioning and the force applied on unaffected foot. Many studies found the role of ankle-foot orthosis (AFO) in the functional and postural stability of patients with stroke (14-17). In other studies, ankle-foot kinesio tape was used to improve stability during standing (18-20).

Studies showed that ankle-foot kinesio tape through correct positioning of the foot resulted from the increase in sensory input can effectively improve the function, increase the range of motion (21, 22), and cause increased stability (20).

he current study was conducted on 26 patients with chronic stroke with a mean age of 59.73 ± 9.97 years and a mean body mass index of 27.72 ± 4.09 kg/m2 (Table 1). Inclusion criteria were at least six months passed since brain injury, no other specific diseases impairing walking and stability, ability to change position from standing to sitting and vice versa, and age 40 - 70 years. Exclusion criteria were no major cognitive defects and severe aphasia, urinary incontinence, unstable medical conditions, skin sensitivity, history of eczema or skin rash related to tape, and history of falling. The current study protocol was approved by the Ethics Committee of Semnan University of Medical Sciences; the participants signed informed consent forms.

Before performing the intervention, patients were assessed for lower limb function using the motor function domain of the Fugl-Meyer scale including 34 scores. Also, the spasticity of the affected plantar flexor muscles was assessed by the modified Ashworth scale, and the Berg balance scale was also used to investigate the balance of the participants.

Then the individuals underwent the main intervention, and the vertical axis of the ground reaction force was measured by a force plate (Kistler, model: 5533A2, Switzerland) during stand-to-sit task. Participants were randomly assessed in three different foot positions from standing to sitting (the foot out of the force plate was 50% in front of the foot on the plate/both feet were placed shoulder width apart/the foot out of the force plate was 50% behind the foot on the plate). To sit on the chair, its height was pre-adjusted based on the individual's height, and the thigh of the individual was positioned parallel to the ground. The movement was done normally and easily, and the patient was asked to look at the target located at the 3-m distance. Then the patient repeated the above stages after kinesio taping of the affected ankle. Totally, each position was performed twice and the mean values were used for analysis. It should be noted that at least a two-minute rest was considered between each movement to prevent fatigue. The kinesio taping of the affected ankle was performed in four stages as follows: The 1st stage was in the prone position and three other stages were performed in supine position. The 1st tape was used to inhibit gastrocnemius muscle; it was initiated from the heel of the patient and was connected to the inner and outer head of the gastrocnemius muscle. The 2nd tape was to assist ankle dorsiflexion; it was initiated from the anterior toes and was connected to the anterior tibia as a functional correction application technique. The 3rd tape was for subtalar eversion; it was initiated from medial malleolus and with the maximum length, the tape was extended approximately 10 cm over the lateral malleolus. The 4th tape was to correct the distal head of fibular, and the initiation was from the anterior surface of the foot; it was connected to the posterior surface of the ankle with maximum length from the lateral surface of the ankle.

The analysis was done separately at three time points of 2, 5, and 8 seconds considering the utilization of the tape (with or without tape) and the position of the foot (affected foot placed behind, feet in the symmetric position, affected foot ahead). At second two, interaction between the tape and the position of the foot was not significant (df = 2, f = 0.99, and P = 0.37); in addition, the main effect of tape was insignificant (df = 1, f = 1.67, and P = 0.20), but the main effect of foot position was significant (df = 2, f = 9.86, and P = 0.000). The Bonferroni adjustment showed that in the position while the tested foot was placed behind, the effect was significantly different from those of other positions despite using or not using the tape (P = 0.018 and 0.001) (Figure 1).

Figure 1. Comparing applied force on the unaffected foot in different foot positions with and without taping at second 2 Figure 2. Comparing applied force on the unaffected foot in different foot positions with and without taping at second 5

Despite the fact that many studies used ankle kinesio tape to improve stability during standing and reported desirable results (18-20), the current study did not find that using affected ankle-joint kinesio tape changes the rate of applied force on unaffected side of the body during stand-to-sit position; hence, the functionality level of patients with stroke in the current study was high (Fugl-Meyer = 28), and they could independently take a few steps and sit down and stand up on the chair. If the functionality level of patients was low, or they were in the acute stage of the disease, using affected ankle-joint kinesio tape would have more effects on the rate of applied force on foot. In the current study, the use of kinesio tape was instant and did not affect the applied load, and if the kinesio tape was used for a longer time, the results might be different.

A normal healthy individual can easily regulate the weight of his body through the capability of dynamic balance and symmetric weight support at both sides in standing posture. Therefore, patients with stroke probably use the support of more weight on their unaffected foot, and load less weight on their affected foot (23, 24); probably due to this issue, using kinesio tape once did not affect the results.

Also, delay in muscular activity was reported in movements and during walking under different conditions in patients with stroke. The results showed that muscular activity in both sides of the lower limb during performing the stand-to-sit movements is defective mostly in the affected side. Abnormalities in muscular coordination are observed on both sides. Muscles of the affected side cannot timely activate the muscles to achieve muscular activity to perform a stand-to-sit movement, but major compensation occurs in the unaffected side of the patient’s body (25). The other issue was positioning the affected foot during stand-to-sit task, which can play a role in the change of muscles activity of the affected side. Researchers found that when the affected foot was placed behind the unaffected one in patients with chronic stroke during sit-to-stand task, erector spinae and gluteus maximus showed more activity in comparison with the position of symmetric feet, and the position that the unaffected foot was placed behind (26). In the current study, positioning the tested foot behind led to increasing the applied force at the two and five seconds of sitting and this did not differ between the unaffected and affected feet; in each posture, positioning of the foot behind applied more force on the metatarsus.

Using two force plates to evaluate applied force on both feet leads to reporting more accurate information during translocations of feet. In the current study, due to the lack of two force plates, the unaffected foot was assessed separately.