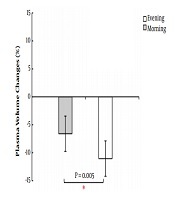 Platelets (plts) are involved in thrombosis. However, intense exercise can affect the number and activation of plts.

The purpose of this study was to compare the effects of acute high-intensity interval exercise performed in the morning and the evening on plt indices and exercise-induced thrombocytosis.

Eleven healthy young adult active male (70.60 ± 8.26 kg) subjects performed high-intensity interval exercise (40 m shuttle sprints at maximum speed for 20 m in a track) on two distinct experimental days (at 8:00 - 9:00 and 15:00 - 16:00) separated by a three-day washout period. Blood samples were taken before and immediately after each exercise session from the antecubital vein by a repetitive venous puncture in a sitting position.

It seems that it may be safer to perform high-intensity interval exercise in the evening due to lower mean plt volume, plt larger cell ratio, plt distribution width, and risk of thrombosis.

Platelets (plts) are involved in thrombosis formation, which plays a central role in the occurrence of myocardial infarction and ischemia-induced strokes. These cardiovascular conditions follow a circadian pattern (being more prevalent in the morning) and are potentially associated with the internal control of the plt activation cycle (1). Thrombocytosis is a non-malignant plt increase in the blood circulation and has been reported to occur after intense exercise (2-4). Platelet count, volume and distribution width, as well as plt to large cell ratio (P-LCR; plts larger than 12 femtolitres to total plt count) (5), are among the most important indicators for evaluating plt function and have been referred to as coagulation factors (6).

Platelets serve as an important link between inflammation and thrombosis, playing a major role in all atherosclerosis development stages. Increased plt activity and its tendency to clot formation underlie the onset of thrombotic complications (6). However, since plts play a central role in the process of hemostasis and coagulation, its dysfunction may result in severe and deadly consequences, e.g., thrombosis (4). On the other hand, measuring mean platelet volume (MPV) and P-LCR is a simple and easy method to indirectly evaluate plt stimulation. Studies have shown that the size of a plt reflects its activity, and larger plts have a higher metabolic potential (6).

In addition, it has been known that exercises with different intensities and durations have diverse homeostasis effects. High-intensity activities increase the risk of thrombotic events and activities with an intensity greater than 80% lead to further increases in the activation of homeostasis processes such as plt activation, coagulation, and fibrinolysis (7). On the other hand, workouts consisting of several high-intensity activities combined with recovery between sets have received a lot of attention in recent decades because of their potential benefits such as faster adaptation in muscle metabolism (8). Posthuma et al. (7) stated that exercise heavily increases coagulation activity through intensity-dependent methods and can activate plts, which may cast doubt on the usefulness of high-intensity interval exercises. The findings also suggest that there is a difference in a sporting performance in the morning and evening (9), and also in plt count at different times of the day (1). However, it is still not known whether performing high-intensity interval activities may be safer in terms of plt function as one of the factors involved in thrombosis.

The current study aims to compare the acute effects of high-intensity interval exercise conducted in the morning and the evening on changes in plt and thrombocytosis indices in men.

The current research comprised a quasi-experimental study with a pre- and post-test design. In the study, 11 males of 19.81 ± 0.98 years old, 177.90 ± 5.04 cm of height, 70.60 ± 8.26 kg of body mass, 22.19 ± 1.88 kg/m2 of BMI and 14.42 ± 4.03% of body fat volunteered to participate. The inclusion criteria were that the subjects did not have infectious, respiratory or cardiovascular diseases or diabetes, and did not take drugs, consume alcohol or smoke. The study was performed under the Declaration of Helsinki and approved by the Research Ethics Committee of the Marvdasht University (ethics code: IR.MIAU.REC.1396.102).

After explaining the research objectives and possible risks of the study, the participants completed a medical history questionnaire and provided informed consent before participating in the study. The subjects visited the research site for three separate sessions with three days of in-between (10). The weight and height of the subjects were measured using a scale and a Seca 700 height measuring tape (made in Germany), while body composition and body fat percentage were measured using a bioelectrical impedance device (Boca X1, Medigate, Korea). In the first session, anthropometric indices, body composition, and body fat percentage were measured. In addition, subjects were trained in performing high-intensity interval exercise.

In the second and third sessions, the subjects performed the experimental protocol in the morning (8:30 to 9:30) and the afternoon (15:00 to 16:00), consisting of low-volume and high-intensity interval exercise (Table 1) (11). This protocol consisted of 40 m shuttle sprints at maximum speed for 20 m in a track. The participants sprinted from one cone to the other and back, performing this exercise repeatedly at maximum speed for a 30 s period. After 30 s of active rest, they repeated the protocol from the starting point. In total, the participants performed this exercise protocol in five sets. This protocol was derived from the 40 m maximal shuttle run test (12). The exercise intensity was measured in all training sessions by measuring the heartbeat of each participant (FT4, Polar, China). The mean exercise intensity was calculated based on the maximum heart rate (220-age) (Table 1). The participants were asked to avoid any intense activity or caffeinated beverages for 48 h before the exercise protocol and were not allowed to drink liquids during the experiments.

Table 1. Maximum HR and Training Intensity of Subject in Morning and Eveninga

To measure plt count, mean plt volume, plt distribution width, and P-LCR, 3 mL blood samples were taken before and immediately after training from the brachial vein of the participants while seated. Blood samples were obtained using sterile syringes, collected in tubes containing EDTA-K2 anticoagulant, and immediately transferred to a laboratory. Then plt variables were measured using an Automated Haematology Analyser (Sysmex XWTM-100, KOBE, JAPAN) with plasma volume change being calculated as described elsewhere (13) and applied to the results.

We used the Shapiro-Wilk test, repeated measures analysis of variance, Bonferroni’s post hoc test, and dependent t-test. All statistical analyses were performed using SPSS version 17 software. The level of statistical significance was adjusted to P ≤ 0.05. Kolmogorov-Smirnov test was used to assess the normality of the data. Given that the data had a normal distribution, repeated measures analysis of variance was used to compare the levels of variables. When the ANOVA test showed a significant difference, Bonferroni’s post hoc test was used. The mean and standard deviations were also used as descriptive statistics. The comparison of maximum heart rate, exercise intensity, and plasma volume between morning and evening was performed using a dependent t-test. 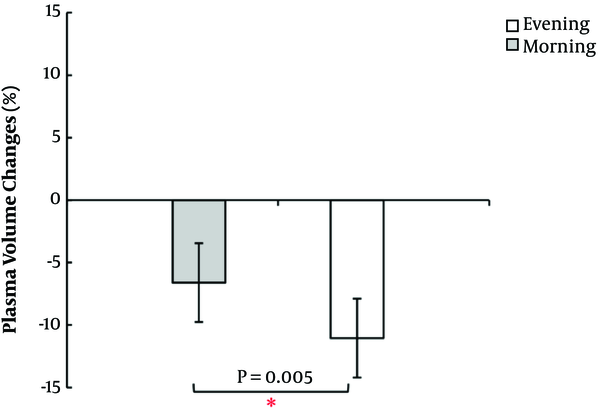 Figure 1. Plasma volume changes after intense periodic activity in the morning and evening
Table 2. Changes in Platelets and Platelet Variables in the Morning and Eveninga

bDenotes a comparison of Pre-test and post-test in each activity.

cDenotes a comparison of pre-tests in the morning and evening.

dDenotes a comparison of post-tests in the morning and evening.

There is no consensus between the findings of various studies about changes in plt variables and thrombocytosis induced by exercise. This can be attributed to differences in exercise intensity (23), participants (10, 21), physical fitness level (21), and exercise protocol (10, 23). Studies have shown that high-intensity activities increase the risk of thrombotic events. This shows that different types of exercise have different effects on the homeostasis profile, which is highly influenced by exercise. However, there are various intervening factors such as age, gender, training status, and training intensity and duration that are involved in homeostasis in contrast to the overall effects (7). Heber and Volf (4) showed that intense exercise has a major impact on all aspects of plt activation. They also stated that although differences in exercise protocols may, in part explain the contradiction in past literature, exercise intensity is a determinant of the plt activation effect. In the current study, there was a significant difference in mean heart rate during exercise (exercise intensity) in the morning and afternoon. Inconsistent with the findings of the current study, the results of Atkinson and Rayleigh showed that heart rate response to exercise intensity is higher during the morning (24).

In addition to the intensity of activity, reasons for an increase in plts after exercise include all factors causing leucocytosis, especially cardiovascular changes, local muscular injuries, possible injuries during exercise, and cortisol (25). Moreover, an increase in plt after exercise is attributed to their release from the vascular bed of the spleen, bone marrow, and intravascular reserves of the pulmonary circulation and lungs (26). However, some researchers believe that the quick increase in plt count during speed training shows that thrombocytosis is probably due to the release of plts into the peripheral blood, not due to increased plt generation. On the other hand, it has been found that epinephrine is capable of causing a powerful contraction of the spleen, a storage site of one-third of the body’s plts, which may play a role in the post-exercise increase in plts (27). Based on previous studies, high-intensity interval activity can substantially increase epinephrine concentration (28). It should be noted that increased plt count in the current study was significant only in the morning. However, it was in the normal range and insignificantly lower than its mean value in the afternoon.

One of the findings of this study was significantly higher MPV and P-LCR in the morning both in the pre-test and post-test. This is consistent with the findings of previous studies, indicating that plts are influenced by the circadian cycle. Scheer et al. (1) showed that the activity of plts depends on the endogenous circadian cycle of the body, as plts are at their largest from 6:30 AM to 9:00 AM. In the current study, MPV and P-LCR were higher in the morning. However, there are some limitations in this study such as the lack of measurement of as epinephrine and epinephrine light hormones, lack of physical fitness of the subjects, lack of control of physical activity of the subjects during the research period. That somehow, they can affect the rate of change in blood parameters.

In summary, since larger plts have a higher potential for metabolism, the current study showed that MPV (which represents the mean size of plts) and P-LCR (a percentage of total plts larger than normal size) (6) were higher in the morning both in the pre-test and post-test. Also, since MPV may reflect increased activation and aggregation of plts and is considered an independent risk factor for coronary artery disease (29), high-intensity interval activity in the afternoon seems to be safer in terms of presenting a lower risk of developing thrombosis.

The authors would like to thank the subjects for their committed participation.