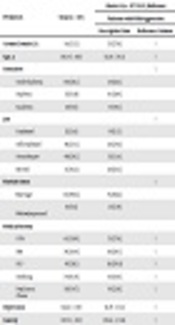 Classification of high-risk behaviors such as aggression and identifying social, medical, and psychological factors related to it can help the emergence and development of the strategies to prevent these destructive behaviors.

Thus, the present study was done with two objectives: (i) cluster analysis of the aggression components and partitioning cardiac rehabilitation (CR) patients and (ii) determining the demographic, medical, and psychological correlations of each cluster.

Cluster analysis divided patients into two groups with mild and severe aggression. Marital status and occupation are the most important demographic correlates, and depression and anxiety are the most important psychological predictors of the cluster with high aggression. The results of the present study can provide a map of the focus of attention on harm reduction interventions by health professionals.

High-risk behaviors such as aggression and violence, suicidal thoughts and attempts, as well as drug and alcohol abuse are among the most critical threats to public and social health (1, 2). Violent behaviors are defined as visible, aggressive manifestations primarily tending to harm or injure others (2). Aggression can be defined as instinctive behavior, divided into proportional and disproportional types depending on the circumstances. Proportional aggression is an adaptive behavior that changes like societal values.

Conversely, disproportional aggression is seen as a non-adaptive and ineffective behavior in the face of real or perceived risk (3). Harmful behavior is seen as aggression if done intentionally and on purpose to harm another or self. Aggression may have devastating effects, such as harm, harmful attacks on self and others, unexpected death, and high-risk behaviors (3).

Depending on the type of violence and injury, violent behaviors are seen in approximately 1% to 29% of the adults (2). Reports of large populations and recent surveys in Iran have reported 2% to 65% prevalence of aggression and violent behaviors among children and adolescents (4-6). The prevalence of these behaviors in the Iranian adult population is reported to be about 11% to 33% (7, 8). Furthermore, the results of recent studies indicate that aggressive components are common among people with chronic diseases (9, 10). Violent childhood behaviors, anger, and hostility are the risk factors for cardiovascular diseases (CVDs) (9, 11).

Better understanding and identification of social, medical, and psychological factors associated with high-risk behaviors like aggression can help develop and prevent strategies for preventing these devastating behaviors (12). In doing so, the categorization of specific patients in cohesive groups and the separation of risk profile behaviors like aggression could be effective in identifying predictors and outcomes (13). Cluster analysis is a beneficial statistical method for partitioning a population with common characteristics and a wide range of diseases and disorders. The clustering of mental health components eases the identification of target groups for timely interventions and helps health policymakers come up with services according to their preferences and needs (14).

The present study was done with two objectives: (i) cluster analysis of the aggression components (anger, hostility, and verbal as well as physical activity) and partitioning CR patients and (ii) determining the demographic, medical, and psychological correlations of each cluster.

At the time of the present study, 215 people participated in the CR program. The inclusion criteria were fluency in the Farsi language, age range of 20 to 75 years, enrollment in CR, and willingness to participate in the study. After initial screening by the research team, only 167 had the criteria for entering the study or were willing to complete the questionnaire. Nine individuals were excluded due to a lack of fluency in Farsi. In addition, 18 and 21 individuals were excluded due to aging and unwillingness to participate in the study. Eligible patients were identified by the research team and entered the study after providing written consent and obtaining the anonymity and confidentiality of their identity. The ethical standards of this study were made according to the Helsinki Statement. Given the formula (N > 50 + 8 m) and the existence of 12 predicting variables in the study, the minimum sample size of more than 146 people seems appropriate for this study (15). This study was approved by the Ethics Committee of Kermanshah University of Medical Sciences (KUMS.REC.1394.203).

One day before aerobic exercise and initiating a CR program, the demographic and medical information of the patients such as gender, age, education, job status, marital status, smoking, histories of hypertension, diabetes, hyperlipidemia, and psychiatric history was collected by the psychologist and cardiologist of the CR research team. After recording the information in the research forms, Beck anxiety inventory (BAI), Beck depression inventory (BDI), and the Buss-Perry aggression questionnaire (BPAQ) were given to each patient individually. After receiving the necessary explanations by the clinical psychologist, the patients completed the questionnaires.

The questions of this 29-item instrument ranged on a 5-point continuum from "extremely uncharacteristic of me" to "extremely characteristic of me." The questionnaire has four subscales, which included hostility, anger, verbal aggression, and physical aggression. The scores are normalized on a scale of zero to one, with one being the highest level of aggression (20). In the Iranian population, the retest reliability of the questionnaire is acceptable (= 0.78). In addition, the instrument validity was approved by factor analysis (21).

Data related to the continuous variables were reported as mean and standard deviations, and discontinuous data were reported in terms of frequency and percentage. In cluster analysis, first, the Euclidean Distance Hierarchy method was used to identify the number of clusters. Centroid clustering method was used to prevent the significant effect of entirely related multiple variables (aggression components) on each other. Models with two to five clusters were separately evaluated indicating that the resolution of the two-cluster model is better than the other proposed models. In the next step, k-means clustering method was used to determine the proposed two clusters of the initial model. Finally, Cramer-V test was used to verify the stability of the cluster solution structure and to specify the agreement between the solutions. The clustering components between clusters were compared using analysis of variance (ANOVA). Additionally, demographic information and medical records of the samples were reported in the baseline by clustering.

In the next step, a binary logistic regression analysis was done to identify the correlates of derivate clusters. Demographic factors were gender, age, education, occupational status, and marital status with all medical variables such as histories of hypertension, diabetes, hyperlipidemia, smoking, psychiatry illness, depression, and anxiety that entered the model simultaneously. Given the presence of two classes, cluster one (healthier samples) was considered as a reference. The results of the analysis were presented as adjusted odds ratio (OR) with 95% confidence intervals (CIs). All statistical analyses were performed using SPSS20 (IBM Corp., Armonk,NY, USA). All the tests were of two domains, and statistical significance was defined as P value < 0.05.

Table 1 indicates the profile derived from the hierarchical and k-means cluster analysis. The results of Cramer-V test (V = 0.541, P < 0.001) showed that cluster solution structure has good stability in both models and there is an agreement between the solutions. The model proposed two clusters for the studied components, and as seen in all components, there is a significant difference between the clusters (P < 0.001). The proposed clusters are (i) patients with mild aggression (n = 87, 52.1%) and (ii) patients with severe aggression (n = 80, 47.9%).

b P value of ANOVA.

4.2. Demographic and Medical Correlates Related to the Clusters

Table 2 shows the characteristics of the participants separately for the clusters in the baseline. Furthermore, this table shows the results of binary logistic regression. The table shows a significant difference between occupation (P = 0.048), marital status (P = 0.048), anxiety (P = 0.006), and depression (P = 0.001). Compared to the reference cluster (cluster 1), the unhealthy cluster has fewer housewives and more married ones.

Table 2. The Results of Binary Regression Logistic for Identifying Correlatesa,b

a Values are expressed as mean ± SD or No. (%) unless otherwise indicated..

b The socio-demographics and other factors in this table were all included as covariates in the generation of the binary logistic regression model. Boldface indicates statistically significant (P < 0.05). Summary of model: The model fitting information is: chi-square = 61.336, P < 0.0005; Pseudo R-square based on Cox & Snell and Nagelkerke = 0.307 to 0.410.

Aggression and violent behaviors are as the most prevalent problems among adults and are one of the most important risk factors for chronic diseases, like CVDs (7-11). In the present study, we used cluster analysis to determine the level of aggressive behaviors and the categorization of CR patients in cohesive groups. This method could well divide the patients into two groups, according to the severity of aggressive behaviors. Previous studies have also indicated that cluster analysis can well classify general and clinical populations according to mental health (14, 22, 23). Additionally, the importance and ability of this method have already been proven in partitioning patients with CVDs (24).

Our results showed a relationship between the occupation status and the unhealthy cluster. In other words, in the unhealthy cluster, people usually have jobs other than housekeeping. It seems that the house makers are less likely to experience job stress compared with others with other businesses. Moreover, their working environment is shared with family members, and this probably means they have more family support during the day. In this regard, the results of several studies showed that higher social-familial support was associated with a lower level of aggression (25, 26). Furthermore, it is expected that they report fewer aggressive behaviors. In addition, as housekeepers are solely women, the unhealthy cluster samples were mostly men. The greater prevalence of aggression in men can explain this result (27).

Other results showed a relationship between the marital status and the unhealthy cluster. The number of married people in this cluster was more than the healthy cluster. Although those who lose their spouses are likely to lose much of their family-emotional-financial support, this problem is not accompanied by increased risk of aggression. Likewise, those who have long been involved with marital conflicts are likely to experience more anger and aggression (28). In line with this, the results of a study in Iran showed that marital conflicts are widespread in married cardiac patients (29).

Furthermore, the results showed a direct relationship between depression and anxiety with an unhealthy cluster. In other words, for a unit of increase in anxiety and depression scores, the probability of aggression increases by 1.1 and 1.3 times, respectively. In confirmation of our results, previous studies have indicated that aggression in anxious and depressed individuals is significantly higher than others (30-32). There is substantial evidence showing that neuroendocrine and neurochemical regulators of aggression and anxiety have a strong relationship with these behaviors (32). Moreover, common genetic factors interconnect depression and aggression (33).

Only CR patients were examined in this study. As only a few patients refer to CR after the heart event, it is suggested that participants in future studies be selected from all patients with CVDs. Furthermore, an increase in sample size, as well as random sampling in future studies, can help distinguish the samples' profiles more accurately.

Cluster analysis of aggression in CR patients could provide a coherent categorization of low-risk and high-risk patients. Marital status and occupation are the most important demographic correlates while depression and anxiety are the most important psychological predictors of the unhealthy cluster. The results of the present study can provide a map of the focus of attention on harm reduction interventions by health professionals. Cardiac health professionals should focus on managing occupational and marital stress as well as controlling anxiety and depression in patients with CVDs to control aggression and the harm associated with it.