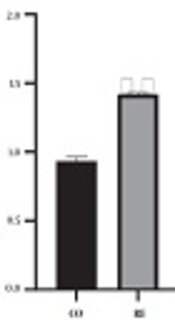 Resistance training and Spirulina consumption could change the expression of the gene involved in hypertrophy.

The study investigated the effect of eight weeks of resistance training with Spirulina platensis ingestion on the heart weight and cardiac CCAAT-enhancer-binding proteins beta (C/EBPβ) expression in male rats.

A combination of resistance training and Spirulina supplementation cannot have a significant effect on the important signaling factor in heart hypertrophy.

The efforts of health facilities around the world to prevent heart disease with an emphasis on physical activity have led to an increased number of participants in recreational and competitive sports programs. This is because regular exercise is associated with structural (such as heart and left vernacular weight), functional, and electrical changes in the heart (1).

The main muscular adaptation in the athlete's body is the cardiac myocytes (2). Physiological hypertrophy leads to the changed structure of the heart (e.g., heart and left vernacular weight), the increased expression of the genes functioning in heart hypertrophy, increased metabolism, and improved myocardial function. However, heart reconstruction requires the expression of many genes involved in the heart structure (3).

On the other hand, today, the use of food supplements in exercise is widely appreciated such that most athletes consume one or more supplements in some or even all the stages of the Championship. Spirulina is a blue-green alga (4) and a potential source of proteins and vitamins (5). Protein comprises 60 to 70% of the weight of Spirulina (5). Studies have shown that Spirulina can increase muscle isometric strength and the rate of muscle protein synthesis (6).

Sandho et al. (7) found that Spirulina consumption combined with exercise led to a significant increase in isometric strength compared to Spirulina consumption or exercise alone. Several complicated mechanisms have shown to be involved in the molecular basis of cardiac hypertrophy (8). Physiological heart hypertrophy develops through several signals such as growth hormones and mechanical force.

In the physiological range, growth hormones such as insulin, insulin growth factor 1, thyroid hormone, and mechanical force can induce physiological cardiac hypertrophy by activating several signals such as PI3K, Akt, AMPK, and mTOR pathways (9, 10). The inhibition of the pathways of protein degradation and/or stimulation of protein synthesis pathways can be effective in the treatment of atrophy and hypertrophy in the skeletal muscle (11). Recently, it has been reported that CCAAT-enhancer-binding proteins beta (C/EBPβ) plays a role in exercise-induced cardiac hypertrophy (12, 13) and cardiac growth (12). C/EBPβ decreases in cardiac hypertrophy due to exercise and suppresses the growth of the heart muscle in adults (13). Overall, research suggests that endurance exercise can lead to reduced C/EBPβ, which can help expand the physiologic hypertrophy (e.g., heart and left vernacular weight) of the heart (14).

The present study aimed to investigate the effect of eight weeks of resistance training with Spirulina platensis ingestion on the cardiac weight and cardiac C/EBPβ expression in male rats. Therefore, the present study hypothesized that resistance training and Spirulina consumption have interaction effects on heart weight and cardiac C/EBPβ expression increases in male rats.

The study used 32 male rats (Sprague-Dawley race; weight: 290 ± 20 g; age: 9 weeks). All the animals had free access to healthy water and standard rat food (specifically designed for rats supplied by Pars Feed Co.) and were provided with human care in accordance with the relevant instructions.

First, an adaptation period of one week was designated. The training protocol included the climbing of a ladder with a height of one meter for eight weeks. Before the start of training, rats climbed up the ladder three times without lifting and without a rest between the repetitions to warm up. Then, rats in the training groups started to exercise on a ladder, 5 repetitions per set (one-minute rest between each repetition), three sets per day (two-minute rest between sets), and five days per week for eight weeks (30% - 100% of body weight per week) (15). The study received approval from the Jahrom University of Medical Sciences (IR.JUMS.REC.1398.011).

After 24 hours of the last training session, all rats were decapitated (15) following anesthetization for about five minutes by injecting ketamine 10% (50 mg/kg body weight) and xylazine 2% (10 mg/kg body weight) to measure the parameters. Then, the heart of the animal was removed from the chest and the left ventricle was obtained. The left ventricular tissue was placed immediately in nitrogen tanks and transferred to an 80-degree freezer for the extraction of RNA (ribonucleic acid). RT-PCR was used for measuring the C/EBPβ gene expression.

The Kolmogorov-Smirnov test we used to examine the distribution of data in the research groups and two-way ANOVA (SPSS version 18) to examine the effect of interventions at a significance level of P < 0.05.

The effects of Spirulina supplementation, resistance training, and Spirulina combined with resistance training on rat weight (Table 1), heart/left ventricular weight and CEBP (Table 2) are shown. The weight of rats increased during the training period in the CO, SP, RE, and SP + RE groups. The findings showed that the distribution of variables in the research groups was normal.

bP values of less than 0.05 were considered significant.

Table 3. The Results of Two-Way ANOVA on the Effects of Exercise and Spirulina on Heart Weight, Left Ventricular Weight, and CEBP in Rats

aP values of less than 0.05 were considered significant. Figure 1. The effects of SP, RE, and SP + RE on the expression of C/EBPβ in cardiac muscle. CO, control; SP, Spirulina; RE, resistance exercise; SP + RE, Spirulina plus resistance exercise. Data are presented as means ± standard error of the mean. *P values of less than 0.05 were considered significant. Figure 2. The effects of SP, RE, and SP + RE on heart weight (mg). CO, control; SP, Spirulina; RE, resistance exercise; SP + RE, Spirulina plus resistance exercise. Data are presented as means standard error of the mean. *P values of less than 0.05 were considered significant. The main findings of the study showed that the expression of C/EBPβ changed after eight weeks. Indeed, the expression of C/EBPβ significantly decreased in the resistance-training group and the Spirulina supplement group while it dropped in the resistance training plus Spirulina supplement group. The findings of some studies in the literature are consistent with the findings of the current study. For example, Bei et al. (17) showed that C/EBPβ decreased in the heart of rats after swimming training.

Bostrom et al. (13) showed that C/EBPβ decreased in the heart after endurance exercise. They also observed that the decreased C/EBPβ expression could control the division of the heart muscle and increase its size. In this regard, we did not find an opposite finding in our studies in comparison with our study findings.

The understanding of molecular mechanisms that specifically control physiological hypertrophy may have important implications for the treatment of heart disease (18). C/EBPβ decreases in cardiac hypertrophy due to exercise and suppresses the growth of the heart muscle (13). Research has shown that C/EBPβ reduces cardiovascular effects induced by exercise and protects the heart against pathological changes (13, 19). Other studies have shown that C/EBPβ is one of the transcriptional regulators involved in exercise responses to the heart. In a study, C/EBPβ decreased the growth of myocytes and activated genes similar to those observed in the exercise groups (13).

On the other hand, clinical studies have shown that exercise is an effective intervention for the primary and secondary prevention of cardiovascular disease although the desirable nature, intensity, and duration of exercises to maximize cardiovascular benefits are still unclear (20).

At the molecular level, exercise stimulates the physiological growth of the heart primarily by controlling cardiac hypertrophy, particularly via the signaling pathways of IGF-1-PI3K-AKT and C/EBPβ (20). The activation of the PI3K-AKT pathway inhibits the expression of C/EBPβ by exercise, which increases the physiological hypertrophy (13). Act inhibits C/EBPβ. Systemic reductions in C/EBPβ heterozygote can increase cardiovascular hypertrophy and improve systolic dysfunction (13).

Maillet et al. (21) showed that C/EBPβ is one of the main regulators of adaptive or physiological response to hypertrophy. C/EBPβ inhibition induces the expression of useful and protective genes and allows for the expression of genes, which, in turn, increases the heart muscle Heart muscle mass and the number of cells in the heart. Therefore, the inhibition of C/EBPβ activity most likely restores the damaged heart tissue and cardiomyopathy of the heart.

The other finding of the present study showed that at the end of eight weeks, the weight of the heart and the left ventricle increased while the increases were lower in the Spirulina supplement group than in the other groups. This finding is justified based on the structure and complementary nature of Spirulina, which partially suppresses weight gain; but in two groups that were involved in resistance activity, increases in the heart rate and left ventricular weight were due to the characteristics of resistance exercise that could compensate for the reduced effectiveness of Spirulina supplementation.

Based on the findings of this study, it can be concluded that although resistance training or Spirulina supplementation could have a significant effect on the reduction of CEBP in the heart muscle of rats, the combination of resistance training with Spirulina supplementation could not have a significant effect on this important factor in heart hypertrophy. There were some limitations to this study, such as the lack of using different methods of measurement such as Western blot, not using different doses of Spirulina, and not measuring signaling pathway gene expression. Therefore, it is suggested that future studies investigate the effect of different doses of Spirulina on signaling pathway gene expression and employ other methods of measurement such as Western blot for protein expression.

The present study is part of a doctoral dissertation approved by the Shahid Chamran University of Ahvaz. The authors express their gratitude and appreciation to the Research and Technology Department of the University.