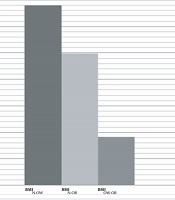 To investigate changes in DNA fragmentation index in primary infertile patients with varicocele, which is followed by microscopic subingual varicocelectomy in different groups based on body mass index (BMI).

This study was performed in 100 patients with primary infertility with varicocele. Patients were divided into three groups (normal (N), overweight (OW), and obese (OB)) based on BMI index. DNA fragmentation index (DFI) parameters were evaluated before and 6 months after varicocelectomy. For DFI analysis, the SCD (sperm chromatin dispersion test) method was used. Data were analyzed using t-test, Chi-square, and ANOVA.

In this study, the mean age of participants was 33.6 and their mean BMI was 28.6, that 51 patients underwent bilateral varicocelectomy and 49 patients underwent left varicocelectomy surgery. In this study, a comparison of DFI before and 6 months after surgery showed a decrease in DFI in all three groups. The difference was 23 in the normal weight group, 11.2 in the overweight group and 9.58 in the obese group, which is statistically significant (PV < 0.05). Also, in comparison with the rate of DFI reduction between groups, the normal weight group showed a greater decrease than the overweight and obese group. This difference was statistically significant (PV < 0.05), while comparing the rate of DFI reduction between the two groups of overweight and obese, was observed no significant difference (PV = 0.635).

Varicocele is the most common cause of infertility (1), which is defined as the abnormal dilation of the pampiniform plexus veins (2), and is considered as one of the known causes of infertility. 10% to 15% of the general population has a varicocele, as well as 30% to 35% of people with primary infertility and 69% to 81% of people with secondary infertility (3). The most common abnormalities in sperm analysis indices in patients with varicocele are decreased motility and decreased sperm count, although 20% of patients have sperm counts above 20 million (4).

In addition to varicocele, there are several other factors involved in DNA damage, including age, environmental factors (such as organophosphate and organochlorine toxins), heavy metals (such as lead), and carcinogens (such as polycyclic aromatic hydrocarbon), and diseases including varicocele, infections, tumors, spinal cord injuries, endocrine diseases, heat and lifestyle (8).

DFI is an important indicator in predicting fertility; DFI reduces the chance of pregnancy by more than 30% naturally or by assisted reproduction methods (9). Varicocelectomy plays an important role in improving sperm analysis indices including motility, number of sperm and, reducing DFI (10).

Obesity is one of the factors that increase oxidative stress and increase DFI in various organs including testis and germinal cells (11), and possibly reduces the chance of fertility; numerous hormonal changes are associated with obesity that can be responsible for changes in sperm parameters and abnormal sexual function. Evidence shows that in obese men, adipose tissue converts more androgens to estrogen, and testosterone levels decrease. On the other hand, the concentration of gonadotropins decreases with increasing negative estrogen feedback on the pituitary gland (12). In other studies, the effects of obesity on the testis have been reported to include normal testicular size, decreased total testosterone levels, decreased SHBG levels and normalized FSH, LH, and GnRH responses, and increased estrogen production (13). The association between obesity and DFI was ambiguous; some studies have reported an association between obesity and increased DFI, but other studies have not observed such an association (14, 15).

This study is descriptive-analytical, 100 men were selected and studied with primary infertility and varicocele that were candidates for varicocelectomy surgery and were selected from hospitals in Ahvaz to compare the changes in DNA fracture index in 1399. Exclusion criteria included: previous surgical history, pregnancy history, history of abortion, history of chemotherapy, trauma, and diabetes, radiation and radiography, and other underlying diseases.

The method of selecting study samples was non-random. After the study samples were selected based on the items mentioned in this section, the necessary explanations about the study conditions and the necessary information about their treatment status and the benefits of the evaluation were provided and written consent was obtained from them to enter the study. Demographic information including age, weight, height, body mass index, varicocele grade, and the number of DNA fractures before surgery were recorded in the checklist. To evaluate DFI was used method of SCD (sperm chromatins dispersion test), which was compared with other tests by Kheradmand et al. (16).

Patients in terms of body mass index were divided into three groups with BMI less than 25 as normal weight, 25 to 30 as overweight, and 30 above as obese. Table 1 shows the relationship between the variables. Then, after the patients underwent microscopic varicocelectomy sub-inguinal surgery by the single surgical team, their postoperative status was determined and after ensuring the absence of active varicocele (recurrence), six months after surgery were evaluated and recorded the rate DFI.

Table 1. The Variables Studied in This Study

Finally, the information obtained from this study, which has been evaluated, has been entered into the statistical software SPSS 26, and for this purpose, the frequency and percentage along with graphs are used in the statistics, to compare the changes in DNA fracture index statistical t-test, chi-square and ANOVA were used so that the treatment results were compared in different stages before and six months after surgery according to different weight groups. Also, according to the study of Al Omrani et al. (17), severe cases of DFI had a prevalence of 30%, which was obtained according to the equation of sample size of 100 with 95% confidence level (Z = 3.84) and accuracy (d2 = 0.09):

where Z, P, and d2 are confidence level, percentage of severe incidence of severe fracture index in the community, and careful study, respectively.

In this evaluation, we studied 100 patients with primary infertility and varicocele who were candidates for varicocelectomy surgery. Based on this, first, the demographic information including the mean and standard deviation of age, height, weight, BMI, and infertility period of individuals according to Table 2 is examined, and then the data are evaluated based on the objectives of the study.

Table 2. Demographic Characteristics of Patients Referred to Hospitals in Ahvaz in the Study of Varicocele in 1399

Table 3. Intensity and Side of Varicocele and BMI. 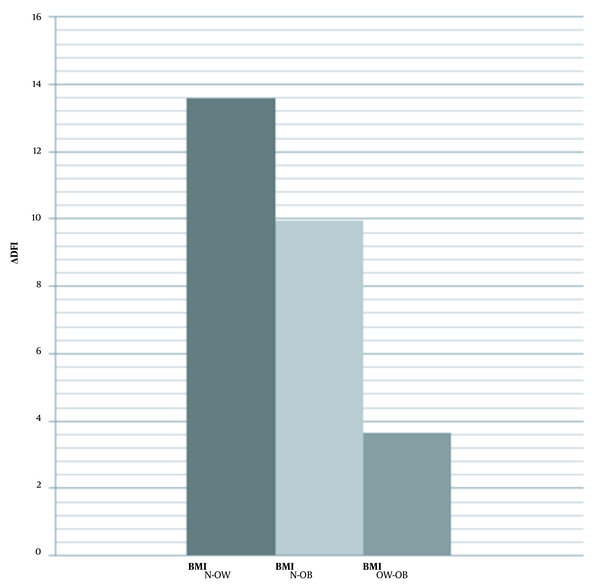 Comparison of preoperative DFI between different groups based on BMI.

Table 4. Comparison of Severity and Laterality of Varicocele and ΔDFI Before and 6 Months After Surgery

Table 5. Comparison of DFI Reduction Before and 6 Months After Surgery in different Grade and Laterality

Table 6. Mean and Deviation from DFI Criteria Before and 6 Months After Surgery in Terms of BMI

Table 7. Comparison of DFI Reduction Ratio Before and 6 Months After Surgery Between Different Groups in Terms of BMI

Many problems, including diabetes and hypertension, and cardiovascular disease, and infertility in men and women, are associated with obesity and overweight (18). In addition to obesity, 30 to 50% of infertility cases in men are due to sperm disorders, which are important causes of infertility (19, 20).

According to the researches, the effects of increasing body mass index on DFI and the effect of BMI on DFI changes after varicocelectomy have not been studied. Therefore, in this study, the main purpose is to investigate these factors and the relationship between them.

The selected statistical population was 100 patients with primary infertility with varicocele who were candidates for surgery and were evaluated with no exclusion criteria. The age mean was 33.6 with a BMI mean of 28.6 and their mean infertility was 3.7 years. There were 64 patients with grade II varicocele and 36 patients with grade III varicocele, of which 49 patients underwent left varicocelectomy and 51 patients underwent bilateral varicocelectomy. Based on body mass index, individuals were divided into three groups with normal BMI (BMIN < 25), overweight (25 < BMIOW < 30), and obese (BMIOB > 30). The number of people in each group was 20, 49, and 31 patients, respectively. There was no statistically significant difference in body mass index on DFI and the relationship between DFI and BMI in all groups before surgery, but different results have been obtained in studies conducted in this field. This is consistent with a study conducted by Oliveira et al. (21) to evaluate the effect of BMI and, sperm quality and found no correlation between BMI and DFI, and a study by Andersen et al. (22), evaluation of BMI, waist circumference and sperm quality was performed. It was observed that a significant increase in BMI reduced movement and impaired normal sperm morphology and also an increase in BMI increased DFI, which had different results from the present study.

In another study conducted by Al Omrani et al. (17), investigated the study of lifestyle association and DFI values, it was found that BMI had a significant positive association with moderate DFI values (15 to 30%) while was not observed the association between BMI and DFI in mild cases (below 15 Percent) and severe (above 30%). To further compare the results of this study, we can refer to another study conducted by Lu et al., in assessing DFI and related factors and found no significant relationship between DFI and obesity indices including BMI and waist circumference (23) showed that it fitting well with the results. Therefore, according to the results obtained from several articles, the role of BMI on DFI was not clear and in the present study, no relationship was observed between BMI and preoperative DFI.

Despite the significant reduction in DFI before and 6 months after surgery in all groups, but the benefit of the group with normal body mass index significantly compared to the overweight and obese group of surgery and also the reduction of their DFI has been higher, while there was no significant difference in the comparison of DFI reduction between the overweight and obese groups. Numerous studies have been performed to investigate the effect of varicocelectomy on DFI, and almost all studies point to the improvement of DFI after varicocelectomy.

A study by Alhathal et al. (24), Which examined microsurgical varicocelectomy and its effect on sperm DNA, found that varicocelectomy significantly reduced DFI from 16.3% preoperatively to 5.4% 6 months postoperatively. In the present study, the mean DFI was 33.2% before surgery, which decreased to 20.31% after surgery, and resulted in an average reduction of 12.89% DFI. There is a good agreement between the results. In confirmation of the obtained results, in another study conducted by Abdelbaki et al. (25), In which sperm analysis indices were evaluated before and 6 months after surgery, the reduction of DFI from 29.49 to 18.1 was reported, which is a significant correlation in These results were observed.

Another issue to be noted in the present study, although the decrease in DFI before and after surgery was significantly reduced in both groups of patients with II and III grade, there was a significant difference between the groups of II and III grade varicocele compared to the reduction DFI was not observed before and after surgery. The main purpose of this study was to investigate the relationship between body mass index and changes in DNA fragmentation index in primary infertile patients following microscopic sub inguinal varicocelectomy, despite a significant decrease in DFI before and 6 months after surgery in all three. The group of patients with normal BMI, overweight and obesity was observed. However, in comparison with the reduction before and 6 months after DFI surgery between the three groups, the reduction in DFI in the normal BMI group was greater than in overweight or obese individuals. This difference was statistically significant but statistically significant compared to the reduction DFI was not observed between overweight and obese groups. Unfortunately, no study has been done to investigate the effect of BMI on DFI changes following varicocelectomy.

The authors would like to thank the Noor Gene Laboratory and Jundishapur University of Medical Sciences, Ahvaz, Iran for their support, cooperation, and assistance throughout the study.