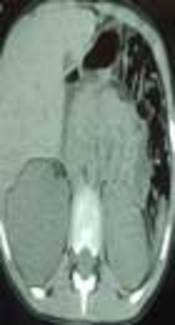 Renal Actinomycosis, A Rare Diagnosis Which Can Clinically Mimic a Malignancy, Case Report and Review of the Literature

Actinomycosis is an unusual infection, which usually appears in the thoracic, cervicofacial, and abdominal areas. Renal actinomycosis is rare and has not yet been reported in children.

An 8-year-old boy presented with a fever, weight loss, and flank pain two weeks after a sore throat. As the imaging studies were in favor of the malignant tumor of the right kidney, he underwent right radical nephrectomy. Pathologic study revealed Xanthogranulomatous pyelonephritis and actinomyces bacterial colonies.

Renal actinomycosis is difficult to diagnose due to its non-specific clinical findings and near similarity to other inflammatory and tumoral conditions. Early diagnosis is important for medical treatment and decrease of un-necessary surgery. Using auxiliary diagnostic methods can be helpful in this aspect. Percutaneous core needle biopsy or fine needle aspiration possesses higher accuracy and specificity in comparison with other methods.

Actinomycosis is a rare infection induced by Actinomyces bacteria. It clinically appears in the cervicofascial, thoracic, and abdominal areas as well as central nervous system (1). Abdominal-pelvic actinomycosis accounts for 10% - 20% of the cases, which is growing in frequency related to abdominal surgery (such as appendectomy), long term use of contraceptive intrauterine devices, poor oral hygiene, neoplasia, bowel perforation, trauma, implantation of foreign bodies, and perforated viscus (2-4). Renal Actinomycosis is rare with fewer than 25 reported cases in adult patients, since 1990. This uncommon infection is clinically difficult to diagnose due to its near resemblance to a number of other inflammatory processes and neoplastic conditions. As the disease responds to treatment with high doses of antibiotics, accurate diagnosis is essential to avoid unnecessary operations (5). Herein, we report a case of a renal actinomycosis in an 8-year-old boy who underwent nephrectomy due to mistake of primary diagnosis. This is the first report of this rare disease in children.

An 8-year-old boy and the first child of family, from a village in northwest of Iran, was admitted to a local hospital with the complaints of fever, weakness, weight loss (7kg within 2 weeks) and flank pain without dysuria or other urinary symptoms. He had a history of a sore throat, which had been improved without intervention two weeks ago. He was burned at 39 weeks of gestation by natural delivery and had a normal growth during infancy and after that. There was no significant disease on his past medical history. No important disease was mentioned in his family history. Physical examination at the time of admission revealed fever (38.2 oral temperature), tachycardia (puls rate 103/minute), and tenderness at costovertebral junction. On urine analysis, white blood cell (WBC) was positive (30 - 40/HPF) and bacteria negative. Urine culture had not been performed. Erythrocyte Sedimentation Rate (ESR) was 112mm/hr. Leukocytosis with shift to left (20.32 × 103 µl) and anemia (Hb 9.9 g/dl) were detected on cell blood count. On ultrasonography, a solid cystic mass with extension to perinephric adipose tissue was identified. Pre-contrast computed tomography (CT) revealed enlargement of right kidney with Gerota’s fascia thickening. There was no evidence of calculi. On post-contrast CT scan, a 74 × 53 × 48 mm heterogeneous mass with cystic component was identified in the upper pole of the right kidney. This mass had exophytic extension into peri-renal fat space (Figure 1). Based on these imaging findings, a possible neoplasm such as Wilms’ tumor was suggested and right nephrectomy was done. No pathologic finding was detected in the liver or lung on pre-surgical metastatic work-up. On Gross pathologic examination, fragile heterogeneous grayish mass with irregular border measuring 65 × 55 × 25 mm was seen in the upper and middle pole of the right kidney. On microscopic examination, collections of histiocytes, foamy macrophages, polymorphonuclear leukocytes, and foci of micro-abscess formation were identified (Figure 1A). Scattered basophilic masses with eosinophilic terminal clubs (so-called sulfur granules) were dispersed between inflammatory cells (Figure 2B). Gram and Gomory-Methenamine-Silver stains revealed branching filamentous Gram-positive and silver positive rods at the periphery of the granules (Figure 2C and 2D, respectively). Acid fast special stain was negative. The final diagnosis was highly suggestive of Actinomyces xanthogranulomatous pyelonephritis. After surgery, body temperature decreased and the patient was discharged on the order of 7.5cc oral Cefalexin every night. Based on pathology diagnosis and after consultation with another center, the treatment was changed to amoxicillin, orally, three times a day for 4 months. Due to poor oral hygiene, the patient was referred for dental examination. Two decayed teeth were identified and extracted. Now, after a 10-month follow up, the boy is well with appropriate weight gain and good general condition. 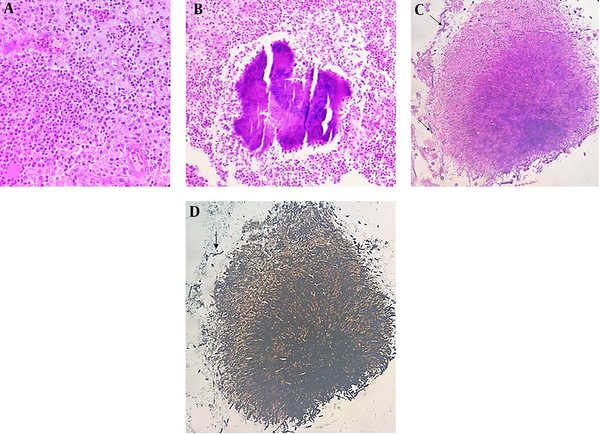 In humans, actinomycosis is mostly caused by Actinomyces Israelii species (6). The agent of this disease is endogenous and normal flora of mouth, around the gums, teeth, crypts of tonsils, respiratory system, and gastrointestinal tract. Actinomycosis is implicated in the loss of host’s mucosal barriers and infiltration of bacteria into the adjacent organ or bloodstream. It is characterized as chronic granulomatous and suppurative inflammation, which is usually complicated with abscess formation or sinus tract with sulfur granule discharge (7). Kidney involvement via direct extension from the contiguous structures or hematogenous infection is rare and reported in less than 25 studies since 1990, in English literature (Table 1) (5, 7-27).

Most of the reported cases have been in the right kidney, in men, and in patients older than 25 years. None of the cases were in children. Wong et al., (2011), showed that age and gender are two risk factors in an incidence of actinomycosis, as the incidence of disease is higher in men (28). The present report is regarding an 8-year-old-boy with right kidney involvement. This is the first report on a patient younger than 16 years old; however, the other two factors are consistent with the previous studies for gender and side of involvement.

Most of the patients were immunocompetent people without underlying diseases that were presented with non-specific clinical findings including abdominal pain, weight loss, fever, weakness, and overnight sweating, in the order of frequency, respectively. Hematuria and urinary symptoms were the other infrequent findings. Laboratory findings were also non-specific including anemia, leukocytosis, and elevated ESR.

With regards to this note that clinical signs and laboratory findings can not be helpful in definite diagnosis, clinicians use auxiliary methods such as culture and imaging for differential diagnosis. Actinomyces Spp. slowly grow on blood agar media at 35 centigrade degree for 7 days. According to previous reports, the results are negative in 76% of cases (29). Wagenlehner and coworkers showed in their study that the microbiology results could not be helpful in diagnosis of Actinomycosis (29). Gram staining and pathologic assessment of pus or infected tissue are more sensitive than microbial culture and are of great value for the diagnosis. On histopathologic examination, granulomatous inflammation, abscess, necrosis, and one to three sulfur granules could be identified in about 75% of the cases. These findings are highly suggestive but not specific for the diagnosis (1). Nocardiosis, Botriomycosis, and Chromomycosis are the main differential diagnoses (28). However, gram staining can show branching filamentous Gram-positive rods at the periphery of the granules, which is highly suggestive of actinomycosis. Nocardia can be usually differentiated from Actinomyces bacteria as they are partially Acid fast positive. Immunofluorescence study is highly specific in the diagnosis. Nowadays, molecular studies, such as 16S rRNA sequencing, are a reference method for identification and classification. Polymerase Chain Reaction (PCR), with specific primers, could be used for identification of microbial agents in clinical material (1). Unfortunately, we couldn’t perform these complementary tests for our case. On the other hand, ultrasonography and CT scan are not diagnostic. As is shown in Table 1, in most of the cases, in imaging, actinomycosis presented as a mass like lesion (not infiltrative process) and mimic a malignant neoplasm, owing to its slow growth rate. Our case was also misdiagnosed as Wilm’s Tumor based on imaging findings and young age of the patient. However in cases with a non-mass pattern, the presenting CT scan features can be cystic lesions with thickened walls and septa or with the infiltrating pattern like as the presence of sinus tract. In this situation, inflammatory reactions in adjacent structures like as the retroperitoneum and psoas muscle are frequent. With this pattern the renal tumor is an unlikely diagnosis (4, 7, 20, 23). A CT scan is usually useful for evaluation of the extent of the disease and involvement of adjacent organs. In some studies, the authors suggest that a MRI can be helpful to distinguishing actinomycosis from other differential diagnosis, especially malignant lymphoma. Actinomycosis show iso to low signal intensity on T1 and low signal intensity on T2-weighted sequences, whereas malignant lymphoma is characterized as iso-signal to high signal mass lesion (15). Manasanch and coworkers expressed in their report that sono-guided percutaneous needle aspiration or biopsy is preferred for diagnosis of actinomycosis and more effective in comparison with other imaging methods (23).

Accurate diagnosis is essential for choosing appropriate treatment modality and subsequent successful treatment outcome. Generally, actinomyces species are susceptible to Beta-lactam antibiotics and penicillin. The traditional concept of long time treatment with high doses of antibiotics is changing. Optimal duration of treatment depends on the site of involvement, performance of surgery and initial burden of the disease (1, 28). Surgery and invasive procedures are considered for the cases with extensive necrosis or failure in antibiotic therapy. The rate of mortality of actinomycosis, according to the site of involvement, time of diagnosis, and time of treatment beginning, was reported between 0% to 28%. As a result, an early and accurate diagnosis is crucial for gaining the best medical care (28).

Actinomycosis is a rare cause of xanthogranulomatous pyelonephritis. Individuals of any age from 8-80 years could be involved. Most of the patients are immunocompetent people, presenting with non-specific clinical and laboratory findings. It is usually misdiagnosed as malignant neoplasm on imaging studies. Accurate diagnosis is essential for early medical treatment and avoiding unnecessary surgery.

Copyright © 2018, Author(s). This is an open-access article distributed under the terms of the Creative Commons Attribution-NonCommercial 4.0 International License (http://creativecommons.org/licenses/by-nc/4.0/) which permits copy and redistribute the material just in noncommercial usages, provided the original work is properly cited
download pdf 3.99 MB Abstract XML Get Permission (article level) Import into EndNote Import into BibTex
Number of Comments: 0