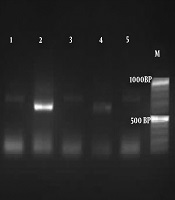 The present study was designed to identify and evaluate antifungal susceptibility patterns of Candida spp. isolated from hematological malignancy patients with oral candidiasis.

Samples were collected from the oral cavity of 138 patients and confirmed for oropharyngeal candidiasis by microscopic examination and fungal culture. Isolated Candida strains were identified by ITS-PCR. Hyphal wall protein 1 (HWP1) was amplified to differentiate the Candida albicans complex. In vitro antifungal susceptibility tests against fluconazole, amphotericin B, and caspofungin were performed according to CLSI M27-A3/S4.

Local information about the increasing resistance to fluconazole in both C. albicans and non albicans Candida species and their antifungal susceptibility is useful for deciding on antifungal prophylaxis and selecting the empirical therapy of cancer patients.

Oropharyngeal candidiasis is a fungal infection in the mouth caused by Candida spp. The disease generates irritating infections accompanied by several symptoms like angular cheilitis, thrush (pseudomembranous), and erythematous (1). The development of this infection may lead to esophagitis and life-threatening systemic infection (2). One of the most important predisposing factors to fungal infections, especially in malignancies, is chemotherapy. The incidence of oropharyngeal candidiasis, as reported in several studies, ranges from 6 to 53% among cancer patients on chemotherapy (3). Candida spp. are normal commensals in humans and may be associated with certain virulence factors (4) If not treated rapidly, especially in patients on chemotherapy, the colonization of Candida spp. with invasion to the mucosa may spread the infection to the bloodstream, leading to disseminated disease (5). Recent data suggest an increased incidence of non albicans Candida (NAC) (6). The antifungal susceptibility patterns of Candida albicans and non albicans Candida are different. Microbiological and clinical evaluations should be emphasized in cancer patients.

The present study was designed to identify and evaluate the antifungal susceptibility patterns of Candida spp. isolated from patients with oral candidiasis in patients with hematological malignancies.

In this study, 138 patients with hematological malignancies were admitted from October 2018 to September 2019 in Iran. Oropharyngeal candidiasis occurred in 120 of them. The study was conducted in the bone marrow, hematology, oncology, and transplant wards of Taleghani Hospital in Tehran, Iran. The patients received antifungal prophylaxis before and during chemotherapy.

Two sterile swabs were used to collect samples from the oral cavity. One swab was used for microscopic examination (potassium hydroxide (KOH) 10% preparation and methylene blue staining) and the other one for fungal culture on Sabouraud Dextrose Agar (SDA, Merck, Germany) with chloramphenicol (50 µg/mL) (Merck, Germany). Oropharyngeal candidiasis was confirmed by the existence of budding yeast cells and pseudohyphae in the direct microscopic examination and positive culture of oral swabs. For preliminary species identification, white colonies in positive cultures were inoculated on the CHROMagar candida Candida medium (CHROMagar, Paris, France).

The DNA was extracted from 24 h fresh colony cultures of all 120 isolates, using the method previously described (7). The final solution (DNA template) was kept at - 20°C until use as a template for PCR.

3.4. PCR Sequencing of ITS Regions for NAC Identification

The ITS regions of the rDNA gene of isolates were amplified by universal fungal primers, ITS1 (5’-TCCGTAGGTGAACCTGCGG-3’) and ITS4 (5’-CCTCCGCTTATTGATATGC-3’) (8). The contents of the PCR mixture were according to a method previously described (7). The PCR products were subjected to the sequencing for the precise identification of isolates. The PCR products were subjected to sequencing using the ITS1 and ITS4 primers by employing the Big Dye Terminator cycle sequencing kit (Bioneer, Korea).

3.5. Amplification of the HWPI Gene for Differentiating C. albicans Complex

Fluconazole, amphotericin B, and caspofungin were purchased from Sigma-Aldrich (USA). The antifungal agents were diluted with RPMI 1640 medium (Invitrogen, Gibco) and buffered to pH = 7.0 with 0.165 M Morpholine Propane Sulfonic Acid (MOPS) buffer (Sigma, USA) (10). Tests were performed in 96-well microtiter plates. Cell suspensions were adjusted to give a final inoculum concentration of about 0.5 × 103 to 2.5 × 103 CFU/mL. The plates were incubated at 35°C for 48 h. The minimum inhibitory concentration (MIC) was determined for the identified Candida spp. including C. albicans (n = 110), C. glabrata (n = 8) and C. africana (n = 2)) according to the CLSI guidelines, M27-A3/S4 document (11). Candida parapsilosis ATCC 22019 was used as quality control. All the tests were carried out in duplicate. The MIC breakpoints were defined for each antifungal agent as follows: fluconazole (susceptible MIC ≤ 8 µg/mL; resistant MIC > 8 µg/mL), amphotericin B (susceptible MIC ≤ 1 µg/mL; resistant MIC > 1 µg/mL), and caspofungin (susceptible MIC ≤ 0.25 µg/mL; resistant MIC ≥ 1 µg/mL) (12).

Out of 138 patients with hematological malignancy, 120 were included, and 18 were excluded because they had negative culture results. There were 74 (61.66%) females and 46 (38.33%) males (with a male: female ratio of 0.62) in the study sample (Table 1). The mean age of affliction by fungal infections was 42 ± 8 years. It seemed that most patients were afflicted by fungal infections due to the induction phase of chemotherapy. Table 2 shows information regarding the type of hematological malignancy in the patients.

Patients with acute myeloid leukemia (44%) comprised the majority of cases, followed by Hodgkin lymphoma malignancy patients (12.5%). Furthermore, the lowest frequency of leukemia belonged to the non-Hodgkin lymphoma with 4.1% prevalence. All the patients underwent chemotherapy. Based on clinical signs and symptoms, white plaques (72%), dry mouth (65%), pain in the oral cavity (52%), redness of the mucosa (32%), dysphagia (25%), and altered taste sensation (22%) were common clinical findings, in sequence.

4.2. Results of Initial and Molecular Identification of Isolates

Overall, 135 (97.8%) and 138 (100%) of these patients had positive results for KOH smear and methylene blue staining (microscopic examination), respectively. Out of 138 patients with positive results in methylene blue staining, 15 (10.8%) showed yeast and budding yeast and 123 (89%) exhibited budding yeast and pseudohyphae. Eighteen (13%) patients had positive results in microscopic examination, which were not detected in culture. All positive cultures were speciated by the CHROMagar Candida medium. The specific patterns of non-green colonies of Candida spp. using the amplification of the ITS region after sequencing indicated C. glabrata (n = 8).

4.3. Results of Amplification of HWPI Gene

Based on the amplification of the HWPI gene and production of DNA fragment, out of 112 colonies of C. albicans, 110 isolates were C. albicans (900 bp), and only two isolates were identified as C. africana (700 bp) (Figure 1). In this survey, C. dubliniensis (569 bp) was not found. The identification of the two isolates of C. africana was confirmed by HWP1 sequencing (12). The alignment of the obtained sequence in BLAST revealed a 98.98% identity with C. africana, and the sequences were deposited in the GenBank under accession number 2275155. 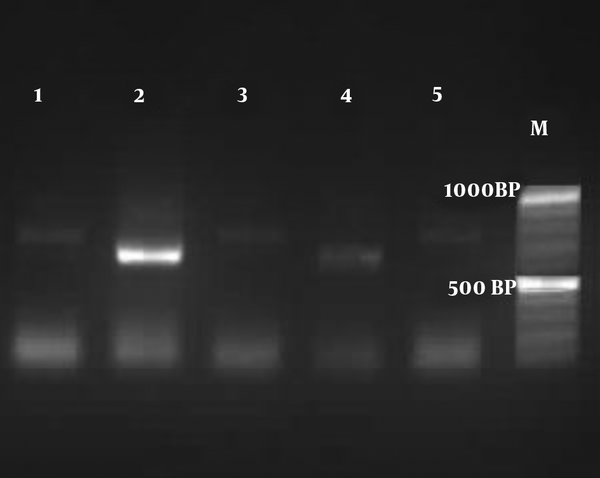 Antifungal susceptibility testing was performed using the broth microdilution method according to CLSI document M27-A3/S4 (Table 3). None of the isolates of C. albicans and C. glabrata were resistant to caspofungin. In the present study, non albicans Candida isolates showed a lower percentage of resistance than C. albicans did.

Oral candidiasis is a major problem among cancer patients on cytotoxic therapy. Malignancy, chemotherapy, and radiotherapy are the main predisposing factors that compromise the immune system and put the patient at the risk of oropharyngeal candidiasis. In the present study, the most common sign observed was the presence of white plaques (72%), followed by dryness of the mouth. In a similar work conducted by Jayachandran et al., the most commonly encountered symptom was dryness of the mouth (65%), and the most common sign among them was the presence of white plaques (3). Also, other previous studies reported other common oral manifestations such as the hairy tongue, oral mucosa atrophy, ulcers, and red and white lesions (13). By evaluating the clinical details, there was a significant association between the dryness of the mouth and the isolation of Candida from the oral cavity (P < 0.0001) (3). Malignancies and associated therapeutic interventions like chemotherapy and radiotherapy can weaken the cell-mediated host immunity, which can control invasive fungal infections. These cancer therapies can induce hyposalivation and xerostomia with increased oral yeast proliferation, colonization, and infection (14).

Candida spp. can be found as commensal microorganisms in the oral cavity in approximately 10% to 70% of the total population (15). In such conditions, the proliferation rate of Candida spp. may increase and make an infection. In this study, the most commonly isolated species among patients were C. albicans (91.6%), followed by C. glabrata (6.6%) and C. africana (2.8%). Previous studies showed that C. albicans was the most frequently isolated species, followed by C. glabrata, but C. africana was not found in these studies (16, 17). Notably, this is the first survey from Iran reporting that C. africana is responsible for oropharyngeal candidiasis in hematopoietic malignancy patients. Candida albicans is the most commonly encountered species in oropharyngeal candidiasis. The change in the etiology of oral candidiasis from C. albicans to non albicans Candida is particularly challenging for choosing an appropriate antifungal drug. The immunosuppressed condition of cancer patients may lead to the colonization of non albicans Candida.

One of the most vital implications of these findings was highlighting the importance of non-albicans Candida species and their significant role in mortality (3, 14). Out of the 120 patients surveyed in the present study, there were 38.4% male patients and 61.6% female patients. Most patients (57.5%) were between 21 and 40-years-old. However, patients younger than 20-years-old comprised a minority of the patients (4%). Based on clinical symptoms, non-Hodgkin lymphoma was the least frequent class of hematologic malignancies among patients (4.1%). The most frequent hematological malignancy among patients was acute myeloid leukemia (44.1%).

Patients suffering from acute myeloid leukemia had the lowest rate of absolute neutrophil count among all patients. This finding can justify the higher rate of patients with acute myeloid leukemia suffering from oropharyngeal candidiasis among all patients. A previous epidemiological study reported that the total cancer incidence in Iran was higher in men than in women. However, gender differences were not significant (18). Morbidity and mortality of invasive fungal infections after induction chemotherapy of leukemia patients and after allogenic stem cell transplantation are not to be overlooked. The risk of invasive fungal infections increases significantly with the use of more intensive chemotherapy (19).

Patients with prolonged neutropenia (< 500 cells/µL for > 7 days) have substantial risks for invasive fungal infection, therefore prophylaxis should be prescribed for them (20). In the present study, fluconazole and voriconazole were used as prophylactic drugs to protect patients against invasive fungal infections. There was a significant association between prophylaxis with fluconazole and resistance to fluconazole (P < 0.0001). It seems that exposure to fluconazole increases the colonization of fluconazole-resistant Candida spp. in cancer patients. Fluconazole exposure may be an independent risk factor for resistance (21). Approximately, 27.12% of the isolates of Candida spp. were intermediated to fluconazole, revealing a decreased sensitivity to fluconazole in C. albicans (n = 28) and C. glabrata (n = 4), (Table 3). Nystatin, fluconazole, and itraconazole are commonly used for the treatment of oral candidiasis. Voriconazole, posaconazole, and sometimes echinocandins are reserved for complicated cases (21).

Amphotericin B is recommended especially for invasive infections caused by fluconazole-resistant strains (8). Finally, the efficacy of caspofungin is similar to that of amphotericin B and is highly effective in achieving favorable responses in patients (22). Many studies have revealed that fluconazole resistance is increasing among C. albicans and non albicans Candida isolates causing oropharyngeal candidiasis infection (23). The molecular mechanisms of C. albicans resistance to fluconazole can be summarized as decrease drug concentration, target site alteration, upregulation of the target enzyme, and development of bypass pathways (24).

A previous study confirmed our results, reporting that the resistance rate to fluconazole was 3% among C. albicans isolates (25). According to some meta-analyses, the use of fluconazole as a prophylaxis of invasive fungal infections of cancer patients should be limited to populations whose incidence of invasive candidemia is higher than 7% to 10% for decreasing fluconazole exposure and resistance (26). All C. glabrata strains were susceptible and intermediate to fluconazole. Furthermore, the resistance rates of C. albicans, C. glabrata, and C. africana isolates to amphotericin B were 1.8%, 12.5%, and 50%, respectively. Also, all Candida spp. isolates from patients were susceptible to caspofungin. Badiee et al. showed the resistance rates of C. albicans and C. glabrata to amphotericin B were 3.3% and 11.1%, respectively (5).

Due to the significance of oral candidiasis in hematological malignancies, the identification and antifungal susceptibility of Candida spp. have particular importance. Our local information about the increasing resistance to fluconazole in Candida spp. is useful for deciding on the antifungal prophylaxis and selecting the empirical therapy of cancer patients.