A Comparison of the Effect of Fractionated and Bolus Dose Injection on Spinal Anesthesia for Lower Limb Surgery: A Randomized Clinical Trial

In previous clinical trials and a small number of studies, the fractional injection of anesthetics led to reduced physiological complications and hemodynamic stability and increased duration of anesthesia.

The present study intended to compare the effect of fractionated and bolus dose injection of bupivacaine and fentanyl on spinal anesthesia for lower limb fracture surgeries.

In this randomized, double-blind clinical trial, 70 patients with lower limb fractures were divided into groups of bolus spinal anesthesia (Group A) and fractional spinal anesthesia (Group B). Group A received a bolus dose of 25 μg fentanyl plus 15 mg bupivacaine 0.5% intrathecally at a rate of 0.2 mL/sec and were laid down in supine position after 45 seconds. In Group B, a half dose of the mixture, i.e., 25 μg fentanyl plus 15 mg bupivacaine 0.5% mixture, was injected intrathecally, and then, the other half was injected after 45 seconds while the needle was still in place. Afterward, the patients were immediately laid down in the supine position. Hemodynamic changes in the sensory and motor blockage parameters were recorded in both groups.

Given its rapid onset, simplicity, and low complications, spinal anesthesia is widely accepted among anesthesiologists and patients, especially in lower limb surgeries (1-3).

The rapid onset of spinal anesthesia can lead to complications such as hypotension, which can be dangerous to the patient (4-7); therefore, a fractionated dose injection technique has been developed whereby the drug is administered in two or more doses in the spinal cord of the patient rather than the entire dosage being injected in one step. In addition to allowing a better sensory and motor blockage with an appropriate dosage, the fractionated dose injection of the drug appears to offer greater hemodynamic stability (8).

Fractionated dose anesthetic injection has been recently introduced as a safe method for a number of surgical procedures. Reduced incidence of hypotension and longer duration of sensory blockage with an optimal sensory level are among the advantages of this method in comparison with bolus dose injection (8-10). Badheka et al. compared the effect of fractionated and bolus dose injection of bupivacaine in patients undergoing elective cesarean section in 2017. Their results showed that in comparison with the bolus dose method, the fractionated dose injection of bupivacaine could induce a longer anesthesia and increased hemodynamic stability (8).

This study was designed and implemented as a double-blind prospective clinical trial. Written consent for participation in the study was obtained from all the patients. The Ethics Committee of the Iran University of Medical Sciences approved the project, which was registered in the Iranian Registry of Clinical Trials under the code IRCT20180121038462N1.

According to the study of Badheka et al. (8), the mean immobility onset time in the fractionated and bolus dose groups was 5.86±1.13 and 4.76±1.01, respectively. The sample size was calculated as 37 in each group and 74 in total, with a confidence coefficient of 0.05 and a study power of 99%, according to the following formula:

A total of 70 patients aged 18-50 years old who were candidates for lower limb fracture surgery with ASA I and II grade were included. The exclusion criteria were absolute contraindications of spinal anesthesia, such as patient’s refusal, localized infection at the injection site, allergy to anesthetic drugs, patient’s inability to maintain position during the procedure, increased ICP, and relative spinal contraindications such as myelopathy or peripheral neuropathy, spinal stenosis, history of spinal surgery, multiple sclerosis, spina bifida, aortic stenosis, hypovolemia, hereditary coagulopathies, thromboprophylaxis (for the treatment of pulmonary embolism), systemic infection, BMI≥35 kg/m2, spinal deformities, and addiction to all kinds of drug and alcohol. The patients were randomly assigned into two groups of A and B using the blockage randomization method. All the patients were completely informed of the study and the complications of this method, and written consent was obtained from them, with the ethics code being IR.IUMS.FMD.REC1396.9511174026.

Standard monitors, including non-invasive blood pressure (NIBP), electrocardiogram (ECG), and pulse oximeter (SpO2), were connected to the patients, and their baseline blood pressures and heart rates (before hydration) were recorded. Then, all the patients were hydrated with 5 mL/kg Ringer’s lactate solution through an IV line with an 18 gauge angiocatheter. The spinal puncture was performed at the L3 - L4 level with a 25-gauge needle in a sitting position.

Patients in Group A received a bolus dose of 25 μg fentanyl plus 15 mg bupivacaine 0.5% at a rate of 0.2 mL/sec and were laid down in supine position after 45 seconds. In Group B, a half dose of the mixture, i.e., 25 μg fentanyl plus 15 mg bupivacaine 0.5% mixture, was first injected, and after 45 seconds, the other half was injected while the needle was still in place (syringe was kept attached to the needle all the time). Then, the patients were immediately laid down in the supine position. As the primary outcome, hemodynamic changes (blood pressure and heart rate) were measured and noted every 3 minutes for 30 minutes after the medication mixture was injected, and the patients were laid down. As the secondary outcome, the onset time of sensory and motor blockage, the highest level of sensory blockage, the duration of sensory and motor blockage, the incidence of nausea and vomiting, chills, urinary retention, and itching were recorded in both groups within the first 24 hours of surgery. The sensory blockage onset time was measured (sec) from the time the patients were laid down until reaching T10 level dermatome anesthesia using the pinprick test.

Moreover, the motor blockage onset time was measured (sec) from the start of blockage when the patients were put in supine position until reaching the modified Bromage scale of 1. The pinprick test was performed every 5 minutes within the first half-hour to determine the highest level of sensory blockage. The patients’ blood pressures and heart rates were measured and recorded every 3 minutes within the first half-hour after the intrathecal injection. To evaluate the sensory blockage return, the pinprick test was performed every 5 minutes during and after the surgery, and the dermatome anesthesia return time to lower than the T10 level was recorded (min). To assess the motor blockage return, the patients’ foot movement return was measured and recorded (min) using the modified Bromage scale from the time of spinal puncture until reaching one every 5 minutes.

The data were analyzed in SPSS 23 (SPSS, Chicago, IL, USA) using mean ± standard deviation, frequency, and percentage for descriptive data. Independent t-test (quantitative variables) and chi-square test (qualitative variables) were used to compare the results between the two groups. Moreover, repeated measures ANOVA was used to compare the repeated measurements of blood pressure and HR in the two groups. P < 0.05 was considered as the statistical significance level.

Table 1. Comparison of the Bolus (A) and Fractional (B) Groups in Terms of Patients’ General Informationa

Table 2. Comparison of the Bolus (A) and Fractional (B) Groups in Terms of Onset Time and Motor and Sensory Blockage Durationa

bThe mean values of the two groups were compared using the independent-samples t-test.

Table 3. The Highest Level of Sensory Blockage in the Bolus (A) and Fractional (B) Groupsa

bThe frequency comparison between the groups was done using the chi-square test. 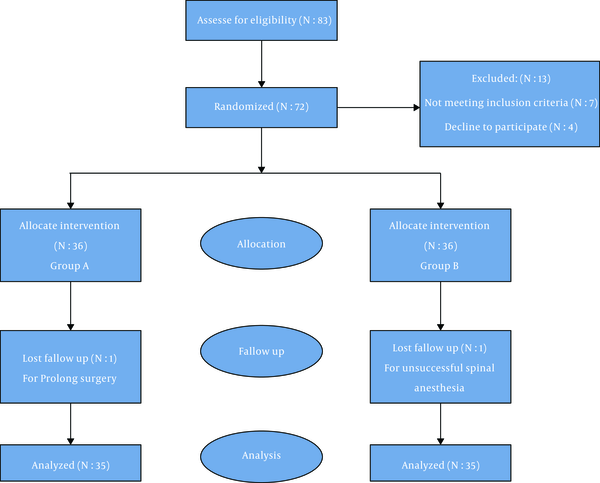 The flowchart of the participant selection

Bradycardia requiring atropine injection was observed in three patients in Group A, and in one patient in Group B. Ephedrine injection was used to improve hypotension in three patients from the bolus anesthesia group and two patients from the fractional anesthesia group. The incidence of nausea, vomiting, and chills was lower in Group B than Group A, and these differences were statistically significant (P = 0.05) (Table 4).

Table 4. Comparison of the Bolus (A) and Fractional (B) Groups in Terms of Complicationsa

bThe frequency comparison between the groups was done using the chi-square test.

According to the literature, a number of factors can affect the blockage speed as well as the sensory and motor blockage depth in patients, such as difference in needles used in anesthesia, anesthetic type, infused solution temperature, infusion rate, and patient’s posture (11). In some studies, the bupivacaine infusion rate had no effect on the sensory and motor blockage or blood pressure and heart rate changes (9). On the other hand, a number of researchers maintain that the anesthetic effect will be prolonged with faster infusion rates. In a study, it was concluded that higher anesthetic infusion rates could lead to a wider sensory blockage (12).

The findings of this study regarding hemodynamic changes are in line with the results of other studies. For example, Cesur et al. examined the effect of the spinal injection rate on the hemodynamics of patients and found that the slow administration of spinal bupivacaine could induce a favorable anesthesia and increase hemodynamic stability (5). Simon et al. indicated that slow anesthetic injection could reduce the incidence of hypotension from 92% to 68% (13). In another study, the effect of the bupivacaine injection rate was examined on hypotension in pregnant women, and it was found that the percentage of subjects with systolic blood pressures of less than 100 mmHg was lower in the injection group (4). It should be noted that the age distribution of the study population can affect hemodynamic results observed in patients, meaning that in studies with older patients, the results were different with a higher incidence of bradycardia and hypotension (10). As a strength, this is the first study to compare the fractional and bolus anesthesia methods in lower limb fracture surgeries after controlling all parameters related to spinal anesthesia, including blockage onset, its duration, its possible complications, and hemodynamic variables in 12 stages. This study had a number of limitations, including not measuring patient position change rates from sitting to supine, not evaluating the consumed drug and adjuvant dosages, excluding patients with higher ASA (III and IV), and not measuring patients’ heights and weights and the operation duration.

In conclusion, we showed that spinal anesthesia with the fractional method could lead to lower hypotension and bradycardia, longer sensory blockage duration, and a more favorable anesthesia level in comparison with the bolus method. In addition, this method was associated with less intra- and post-anesthesia complications than the classical bolus method. Further studies with larger sample sizes are needed to obtain more accurate results and use a lateral position for fractional spinal anesthesia to change the treatment protocol.