Mastectomy is a common surgical procedure associated with intra and postoperative pain if untreated adequately will lead to chronic pain.

This study aimed to evaluate the efficacy of serratus anterior plane block using bupivacaine/magnesium sulfate versus bupivacaine/ nalbuphine for mastectomy.

Breast cancer is the most common cancer among females (1). Mastectomy is accompanied by significant perioperative pain, which must be properly managed because, in 25% - 40% of cases, inadequate pain control causes chronic pain syndrome presented by phantom breast pain, paraesthesia, and intercostobrachial neuralgia (2). Adequate postoperative analgesia allows early mobilization and higher satisfaction of the patient (3). Ultrasound (US) guided interfascial plane blocks, as pectoral nerve block and serratus anterior plane block (SAPB), are easy to perform blocks that provide adequate analgesia after mastectomy (4-6). Nalbuphine (a synthetic mix of k agonist and μ antagonist) is a strong analgesic (7), which its onset of action is in 3 minutes and its duration is between 3 to 6 hours, with few side effects in the dose of 0.2 - 0.4 mg/kg (8-10).

Magnesium is a non-competitive N-methyl D-aspartate antagonist that blocks calcium influx (11). It is reported that magnesium is involved in nociception (12).

To our knowledge, no previous study compared the analgesic efficacy of serratus anterior plane block with bupivacaine/magnesium sulfate versus bupivacaine/nalbuphine for breast cancer surgery. Therefore, we hypothesized that those additives could reduce acute postoperative pain and result in effective postoperative analgesia due to block of the lateral cutaneous branches of the intercostal nerves (T2 - T6) by diffusion across the fascial planes and muscle layers.

The current study aimed to compare the efficacy of ultrasound-guided serratus anterior plane block with bupivacaine/magnesium versus bupivacaine/nalbuphine in breast cancer surgery.

The current study was conducted in Beni-Suef University Hospital. The study is confirmed by the Ethical Committee (approval number FMBUS REC/30042019/Ali), and written informed consent was obtained from ASA I and II female patients who had mastectomy because of cancer breast under general anesthesia from May 2019 to December 2019. Besides, the study was registered at ClinicalTrials.gov, trial registration ID: NCT03944759.

Forty ASA I and II female patients, being aged 25 - 60, and history of one-sided breast cancer surgery.

Once settled in the preoperative room, ECG, pulse oximetry, and arterial blood pressure were connected, 20 G IV cannula was inserted, midazolam 0.05 - 0.2 mg/kg IV was given, and while patients were in the supine position under strict aseptic conditions, the serratus plane block was performed before induction of anesthesia. The skin of the anterior and lateral chest wall on the operative side was sterilized. The second rib was identified, and the ribs were counted to the fifth rib. The ultrasound probe (6 - 13-MHz high-frequency linear transducer) was put on the 5th rib mid axillary line in a sagittal plane. The latissimus dorsi muscle and the serratus anterior muscle were identified in the fifth intercostal space. The skin was infiltrated with 1ml of 2% lidocaine, and a 22-G spinal needle was introduced in the plane relative to the ultrasound probe in the supero anterior to the posteroinferior direction. The needle was inserted superficial to the serratus anterior muscle, hydrodissection performed using 2 - 3 mL of saline to confirm the proper positioning of the tip of the needle, and after negative aspiration, the aforementioned drugs were injected above the serratus muscle slowly in divided doses (4, 13).

The study drugs were prepared by anesthetist (who were blinded to the study and did not share in the technique) in labeled syringes, patients were divided into two groups by a sealed opaque envelope, and received the study drug as follows:

To prevent inadvertent intravascular insertion of the needle, the study drugs were injected in increments after repeated aspiration.

After confirming the adequacy of the block, general anesthesia was induced with intravenous fentanyl/propofol/atracurium. The patients were intubated with an oral cuffed tube and mechanically ventilated. Anesthesia was maintained with sevoflurane 1.5% in 50% O2/Air 50%.

At the end of the surgery, inhaled anesthetic were discontinued. After the reversal of muscle relaxation and full recovery, patients were monitored at the recovery unit.

The following parameters were recorded by an anesthesiologist who was not aware of the study protocol:

3. The Medical Research Council scale was examined at 20 min after performing the technique, then postoperative examinations were performed at 1, 6, 12, 24 h by examining the arm adduction muscle power (0 = “no muscle contraction is visible”, 1 = “muscle contraction is visible without movement of the joint”, 2 = “active joint movement is possible with gravity eliminated”, 3 = “movement can overcome gravity, but not against resistance”, 4 = “the muscle group can overcome gravity and move against some resistance”, and 5 = “full and normal power against resistance”) (15).

The sample size was calculated by comparing the time to first request for analgesia (TFA) between GBN and GBM, as it was the primary outcome of the current study. According to our pilot study, the mean ± SD of TFA in GBM and GBN was approximately 20.7 ± 2.5 and 22.7 ± 1.9 hours, respectively. The minimum proper sample size to be able to reject the null hypothesis with 80% power at α = 0.05 level using student’s t-test for independent samples was 20 patients in each group. Sample size calculations were conducted using the PS power and sample size calculations software version 3.0.11 for MS Windows (William D. Dupont and Walton D., Vanderbilt University, Nashville, Tennessee, USA).

Data were statistically described in terms of mean ± standard deviation (± SD), median, and range, or frequencies (number of cases), and percentages when appropriate. Shapiro Wilk test was used to assess the normality of the data. Comparison of numerical variables between the study groups was performed using the Mann-Whitney U test for independent samples. To compare categorical data, chi-square (χ2) test was performed. When the expected frequency was less than 5, Fisher’s exact test was used. A two-sided p-value of less than 0.05 was considered as statistically significant. All statistical calculations were performed using computer program IBM SPSS (Statistical Package for the Social Science; IBM Corp, Armonk, NY, USA) release 22 for Microsoft Windows.

All patients completed the study (Figure 1). No statistically significant difference was observed between the two groups in terms of demographic data (Table 1). 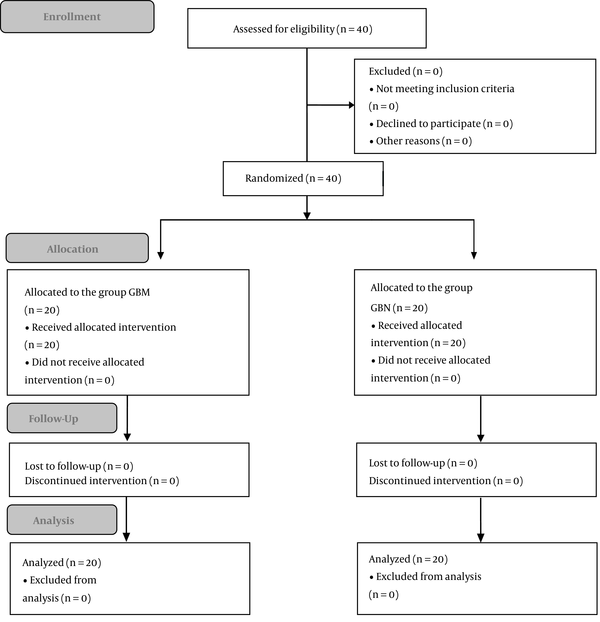 Sensory block was statistically significantly lower in the GBM group than the GBN group, at 24 hours postoperatively (Table 2).

aValues are presented as median (range).

The Medical Research Council scale was statistically significantly lower in the GBN group than the GBM group, at 24 hours postoperatively; Table 2.

Postoperative time to first request of analgesics (hours) was statistically significantly longer in the GBN group than the GBM group (Table 3).

aValues are presented as mean ± SD or median (range).

VAS at rest was statistically significantly lower in the GBN group than the GBM group, at 6th and 24th hours postoperatively (Table 3).

The ultrasound-guided serratus anterior blocks increase the safety of the procedure and accelerate it (19).

The nerve supply of the breast is derived from supraclavicular nerves, lateral, and anterior cutaneous branches of the 2nd to 6th thoracic intercostal nerves (20). The mechanism of analgesia is by diffusion of the LA across the fascial planes and the muscle layers (21).

The results of previous studies conducted on female patients who had mastectomy and received SABP are to somehow different than the results of the present study, mainly due to differences in using local anesthetics, concentrations, and adjuvants as well as different time of performing the block.

Margany Osman et al. (15) conducted a study on patients who had breast surgery and concluded that serratus intercostal plane block (SIPB) with levobupivacaine and adrenaline 1: 200 000, given 30 min before the operation, increased the duration of parasthesia in the SIPB group for 8 hours postoperatively. While in the PECS group, the duration of analgesia was 3 h postoperatively with significantly higher VAS. Besides, in the pectoral nerve blocks group, the number of patients who received postoperative fentanyl was higher among patients who had non-reconstructive breast surgeries.

In a study conducted by Rahimzadeh et al. (22), serratus anterior plane block was performed postoperatively after mastectomy using plain bupivacaine 0.3 mL.kg-1, 0.2%. The authors reported no significant difference between the SAB block groups and the control group (who received no block) in terms of the pain scores. TFA was longer in the SAB group (323.5 ± 49.7 minutes) than in the control group (16.6 ± 0.1 minutes). No side effect is reported. Amin Samar and colleagues (23) compared the ultrasound-guided serratus anterior plane block with 0.4 mL/kg bupivacaine 0.25% and adrenalin 5 μg/mL to thoracic paravertebral block with 20 mL of bupivacaine 0.25% and adrenalin 5 μg/mL in terms of controlling acute postmastectomy pain and reported that postoperative time to first request of analgesics was long.

Blanco et al. (24) used levobupivacaine 0.125% for patients who had breast surgery and concluded that the duration of the sensory loss was longer in the serratus intercostal plane block group than the PECS II group. Also, Bashandy and Shaker reported that 84% of patients who had breast cancer surgery and received SAPB had no or very little postoperative pain and they did not need opioids during the first 24 h after surgery in contrast to 76% in patients who received thoracic paravertebral block (25).

Bhoi and colleagues (26) found that in a morbidly obese patient, the serratus anterior block with ropivacaine was effective in providing analgesia during breast surgery.